Activating Inspiration :: An Interview with Naturel

The homie Naturel just dropped his newest creation – DOA – and has Jordan heads going crazy for this. We met a while back and I just felt there were so many similarities between us, with his work and my work, and not even on a visual tip necessarily, but more like his character, authenticity, determination, honest, crazy work ethic, music, culture, etc. I’m a huge fan and as soon as he dropped his recent DOA series, I thought it would be dope to chop it up with him and get inside his brain, and bring awareness to what he creates because he contributes so heavily to this culture. Real recognize real. 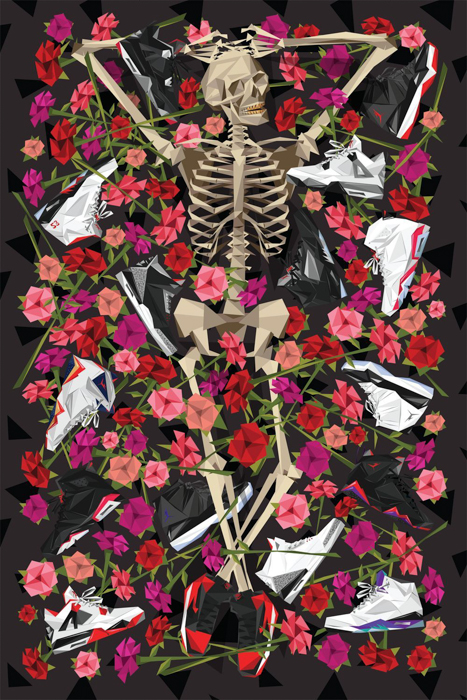 Tell me about your background. School/training? Working with Jay Z?

I was born and raised in PG County, Maryland, right outside of DC. I had some formal training in fine art in high school then later on in college at Pratt Institute in Brooklyn, but most of my art education came from my experiences working as a designer in the fashion industry. For about 3 years I was a junior/senior designer at Roca Wear right around the time that whole Jay and Dame fall out happened. My first season there, Dame had to sign off on all the designs we come up with. Then Jay took over the ROC and the whole culture around the office shifted. The way those two dudes worked was like night and day. Jay was more hands on and involved in every little aspect but in a good way. He had this passive yet commanding nature about him that I really fed off of. I mean, we’d have these day long meeting with him like 3 times a week and everyday I’d take the train back to Bedstuy and see the impact he’s had in the hood. I’d come back to my block like, “He came from here, now look at him. If he can be that transformative and still be so influential, then I can too!” Dude’s really smart, I really enjoyed learning from that.

Maaaan! I wake up to kisses from my Queen and coffee the way I like it, I love my life! I be feelin like Prince Akeem and shit! I drive my daughter to school and my Queen to work catching up with them along the way. Then once they’re out the car, I crank the livest shit I can find and vibe the fuck out on the ride back. I get most of my ideas at that time, so by the time I get back to the studio, I’ve already worked out most of the idea in my head. As soon as I hit the desk, it’s on. I usually have Sports Center on mute in the background, and music playing in between calls. I eat lunch if I’m lucky, but most of the time I skip that and keep working. As soon as I know it, it’s time to pick my girls back up. Then when we get back home, I TRY (I use the word “try” real loosely) … I TRY to help out with the homework and stuff around the house, but then after that, it’s back to working! By that time, I’m starvin’ fitna fuck up some ribs or somethin’, then it’s back to workin’ while watching a game in the background. I usually don’t get to sleep till 2am, then I wake back up and do it again. It ain’t rap video status, but I love it! I get to do me all day!

I was groomed as a bullpen designer. Meaning that everyday dude that digests the culture on the daily, gets inspired, and has to push those ideas to the side for the greater, corporate initiative. I’m the same dude, just with no corporation in the way. So I feel like the my work speaks for the people, raw and uncut.

Can you explain the meaning behind the DOA piece?

There’s no real deep meaning behind it. Where I grew up, having a pair of J’s was a must! Anything else besides Timbs and maybe some 996 New Balances was a “Hell naw.” I had the opportunity to do a rug with Spilled Co. [there’s still a few left!] and wanted to change the way you looked at a rug. I wanted folks to respect it and not even want to step on it. I’ve developed this “Dead” series before with skeletons and thought it was a perfect way to expand on the idea. I got the idea while listening to “Birthday Song” by 2 Chainz. When he said “WHEN I DIE, BURY ME INSIDE THE GUCCI STORE!”, I thought that it would make a great illustration… A burial in a retail space on some mausoleum shit. Being able to do a rug just fit perfectly with that vision, hence the stunt at the Jordan store.

Tell me about the stunt you pulled at the Jordan store for this release?

The idea was already planned out before the illustration was even made. I wanted to make the statement for all the die-hard Jordan folks, “I’ll die happy when I have all the J’s on my bucket list.” Other than that, I loved the idea of a scavenger hunt. It wasn’t so much of a stunt to sell a rug. It was more about the act of walkin’ up into the only Jordan store in the world and leaving a piece of art behind for one lucky person to grab up. The video was just me and a couple of the homies walking up into the store unannounced and laying down the rug and leaving! I think the staff was caught off guard with the confidence that we had when we walked in, like we were supposed to be doing that or something. Shit worked out, and got grabbed up immediately. I had a few folks that was SO upset that they missed it. I heard this one story where this dude was taking a shit, saw the IG post, clipped it off and ran down to the store and was like, “I saw the rug! Where’s it at? Gimme that!” Hearing that story alone made it so worth it!

You have explored similar subject matter with the  “Thoroughdead” and “Deadstock”  prints. Is this a series you’re creating?

Yup, it is a series! I didn’t start it with the intentions to make it a series though. But they look good together, and the idea really opens itself to other iconic poses. 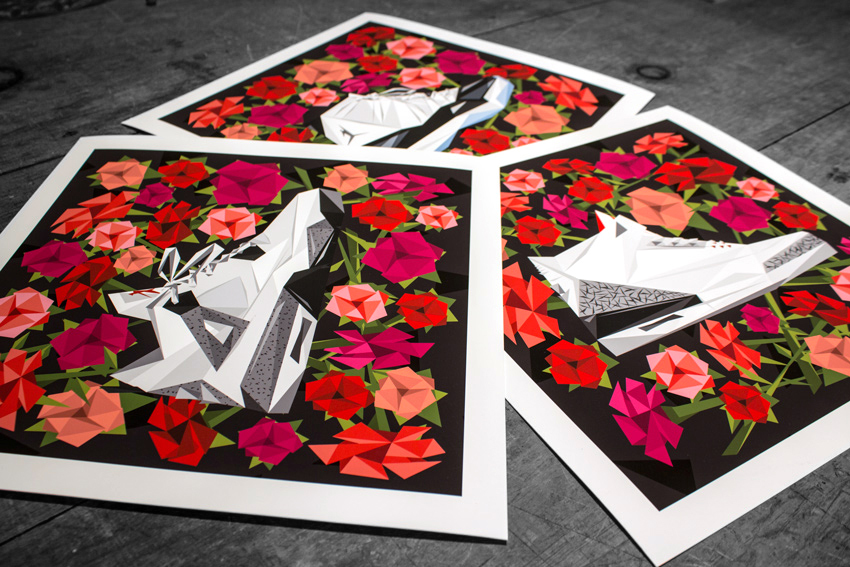 Your work is similar to mine, in a way that it brings instant gratification. It seems like you get your ideas out fast. You can be telling me about a lyric or theme that enters your brain, then the next day, you have a new piece created. Can you talk about the process and how an idea that inspires you turns into an image and how you immediately connect that image with your audience?

Man, that’s a really humble and humbling statement! Your work is and has been for a minute, amazing! Thank you for that! For me to be able to finish the ideas pretty fast is a testament to the raw energy I get from the music or the idea in general. I’m lucky enough to have a style that’s a strong enough vessel that can carry out those ideas quickly. I was groomed as a bullpen designer. Meaning that everyday dude that digests the culture on the daily, gets inspired, and has to push those ideas to the side for the greater, corporate initiative. I’m the same dude, just with no corporation in the way. So I feel like the my work speaks for the people, raw and uncut. Honesty connects to like-minded people in a way that more contrived ideas can’t. I feel like I’m a designer whose work speaks like a rapper in the context of high art.

What generally inspires you to create pieces? Obviously, you are a fan of hip hop and culture, but what are a few things that really create inspiration for you?

I’ve always had a knack for things that are visually pleasing, I guess cuz I’m a Taurus and all. I grab inspiration from everything around me, and I often find the beauty in the small things. Sometimes I’ll walk through museums with my headphones on, crankin’ somethin I’m diggin’ at the moment and let my mind dive into that juxtaposition.

Your style is very modern and usually pays homage to the masters of art, and it’s crazy that your art is all based off of a triangle. What are your top 5 present day artists?

The style that I have was just a result of a honest journey into a process that intrigued me. No real intentions other than to see what it would come out to be. The modern look of it kinda just came with it. I wanted to see what it would look like if I painted with triangles. I love painters that can define a plane and dimension with one quick mark like John Singer Sargent. A lot of my choices of lighting come from him. I also really love Tom Wesselmann and Roy Lichtenstein, I feel like I get a lot of my juice from those guys. As far as present day artist that I draw from, I would say Malika Favre, Jay West, Parra, Condo and you bro!

You can check out more of his work here.

This release was an exclusive drop on 1xRUN – you may still be able to snag one if you act fast!