DOORS AND BRIDGES are constructed from flat, sturdy, pieces of wood. They unlock secrets, provide sight to the unseen, and take you from one world to the next. Take that wooden plank and bolt it to 4 polyurethane wheels, and you’ve got your own portable adventure.

My first skateboard was some hot-pink monstrosity my mom picked up for my brothers and I back in the early ‘80s (before bubblegum music videos featured the token skateboarder with the crooked cap, Zoo York was sold at Macy’s, and before Tony Hawk was flippin’ cheese-smothered bagels). We never asked for a skateboard – I was too busy rubbing the Autobot sticker on my Transformer – and we were oblivious to any pop-culture references to skater dude-ism. Unfortunately, my brothers and I stripped that board of its integrity, butt-boarding down the driveway at breakneck speeds, using it as a seat during backyard games, and eventually, as just another obstacle for Snake Eyes to climb over.

Eventually, that skateboard reincarnated its way back to me in the 7th grade – when Danny Miller asked me if I ever skated. Of course, I replied (albeit on my butt down long driveways). I ran home with his California Cheap Skates catalog, and ordered my first Acme “Classic” deck with 40mm wheels and Venture Featherlite trucks on my mom’s credit card. She was confused at the triple-digit price tag (“It doesn’t cost that much at Sportmart!”). I was delighted and didn’t sleep a wink that night.

The first week was aggravating, to say the least. I could pedal, coast down sidewalks, and even kick that whole Marty McFly pop-up thing when I stopped. But when Danny asked me how high I could bust a 50-50, I looked at him blankly and quietly responded, “Uhh...what’s a 50-50?”

With time, those questions went from “How should I ollie into this tailslide?” to “Who drew the graphics on that skateboard? (Pushead!)” to “Where’d you get pants that big? What’s a turntable? What’s a bong? Who’s Minor Threat?” Plenty of questions, and answers were open 24 hours a day, 7 days a week. True, it was adolescence, not too much unlike Johnny American’s teenage years on the ol’ football field, or Susie Thompkins’ pom-pom-filled high-school escapades. But my answers weren’t coming from Coach Carter or MTV. My parents were clueless, my teachers were frustrated, and pretty much anyone over the age of 20 could swallow a big fat middle finger. I was a pissed-off youth, I was different, and the only answers to life’s toughest questions were coming from that streamlined concave plywood – my tree of knowledge, my mobile soapbox, my grip-taped confessional. 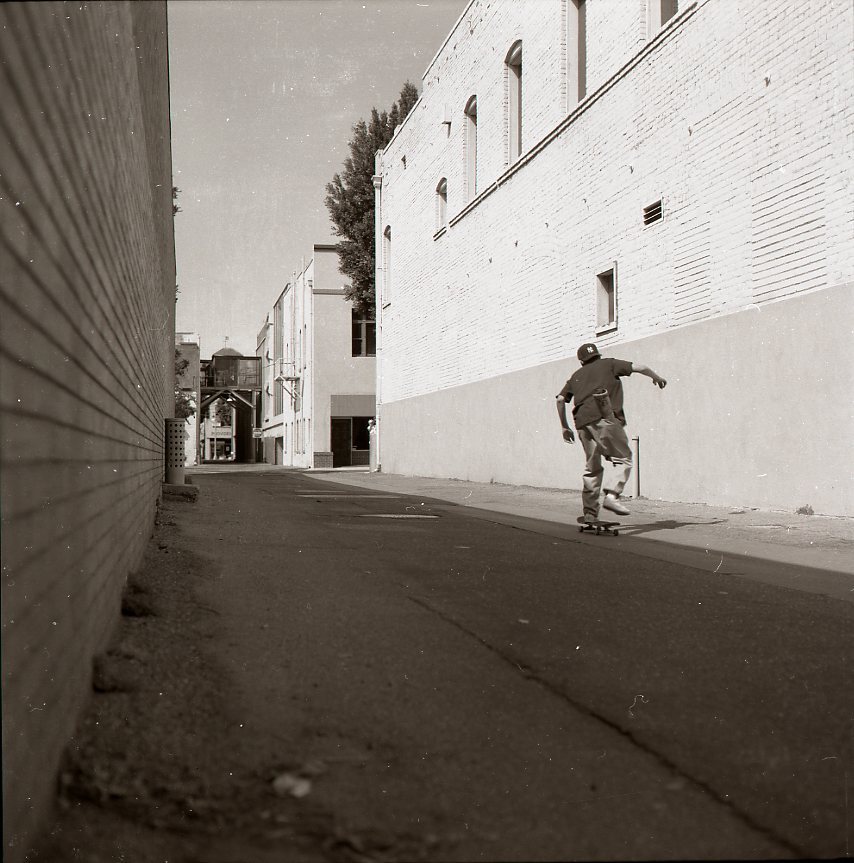 Back then, as a young teenager, something strange happened when dragging around a skateboard. To you, it was a sticker-laden security blanket.

– To your principal, it was a disciplinary red flag.
– To the government, it was a weapon of mass destruction.
– To your parents’ friends, your parents were doing an awfully piss-poor job of keeping their kids in line.
– And to the popular kids, it meant you were, well, unpopular.

But you were making a statement. That instead of shootin’ hoops after school with the goodie-goodie mob or partaking in some kind of sport which required cooperation, ya-ya team unity, and towel-cracks in the locker room, you were obliterating the local gas station’s curbs with the homeys – 2 of whom were livin’ on the streets, 1 who was smoking weed out of a coke can, and another who was debating whether or not to jack something from Target or staple his ‘zine together in Kinko’s. Your home-court was the strip mall parking lot (where you practiced until the pigs came), your hard-nosed coach was yourself, and the only way you were gonna get where you wanted in life was if you, as the punk adage goes, “did it yourself.”

Of course, that meant you didn’t get invited to all the right parties, sit at the right table during lunch, or revel in that bangin’ pop-queen single on the morning countdown. But that also meant you were growing up faster than the kids around you, because you could see things that they couldn’t and/or wouldn’t. You learned from all the wrong kids at the wrong parties – the ones with funny-colored hair and kooky t-shirts, but who read Nietzsche and Kafka and actually knew what “proletariat revolution” meant, as opposed to who-did-what-with-whose-boyfriend-oh-my-god. You ate lunch behind the library with the 5 other wrong kids at school who thought skateboarding was cool, traded blackbook sketches and argued over whose “e’s” and “s’” looked better. And you spent weekend nights at all the wrong clubs, the ones without strobe lights and mini-skirts, but overflowing with intelligent people who appreciated intelligent music, could play instruments well, and organized “Food not Bombs!” events, animal awareness programs, and anti-racism associations.

Or does skateboarding run deeper than its newfound rainbow-sprinkled frosting? Underneath its commercialized glow and big-industry ruse, the true skater will always find fulfillment in sticking a 360 flip, or a clean ollie’s solid pop. I have never been a technically proficient skateboarder by any means, but what entrances me about the sport is the personal accomplishment behind a complex trick, and the sensation of pushing one’s self faster, harder, and fatter – it’s a neverending story. If Skateboarding has any rules or records, they were made to be broken. Over and over again. And that is a metaphor for life.

So skateboarding saved my life. It shaped my worldviews, social perspective, and political opinions. It inspired my taste in music, art, and literature. It revealed the underworld, run by the underdogs, the underestimated, and fueled by the underappreciated. It was my first spanking paddle and will be my dying tombstone.

And for that, I say Thank You Skateboarding. ANDY JENKINS FOR THE HUNDREDS MAGAZINE

The Hundreds
The release of the The Hundreds by Andy Jenkins collection is quickly approaching, so we wanted to give you a little insight on the dude behind the artwork. The Hundreds Magazine caught up with And...
HIDE COMMENTS