The conceptual artist Ryder Ripps recently Instagrammed a shot of him and Kanye with the caption, “Most amazing experience of my life,” likely teasing a future visual project between the two. It doesn’t seem like Ripps expected this to happen 2 years ago, when he was involved in the elaborate web-prank WhoDat.biz, which trolled the entire Internet and touted itself as an amusingly Kanye-related (it wasn’t) “FACEBOOK OF WEBSITES.” But because Ripps is known for his concern with honesty in art and online – much like Kanye – there’s more to the WhoDat.biz ruse: Was it a troll? Or was it a demonstration of truth and (its) displacement on the Internet?

Ripps mostly navigates in digital spaces as the creator of sites like dump.fm and the creative director of digital agency OKFocus – with an extensive CV under his belt that involves projects with Nike, Kenzo, Red Bull, Been Trill, Diesel, M.I.A., among others (like the time he was a trippy Sean John model). So it seemed new for him to recently start making oil paintings. Apparently with the help of Jeff Koons’s assistants, the paintings depict digitally warped screenshots from the Instagram of streetwear pillar of thirst Adrianne Ho. With figures like Ho and miss new booty Jen Selter making careers out of the successes of their respective Insta-fitness brands, Ripps’s cyber-impressionist paintings seemed to be both a jab and a homage to their precarious realness – their uncertain truths. On a platform where authenticity relies on visual assumption, ”I see her as a true Instagram model,” says Ripps on Ho. Read why below: 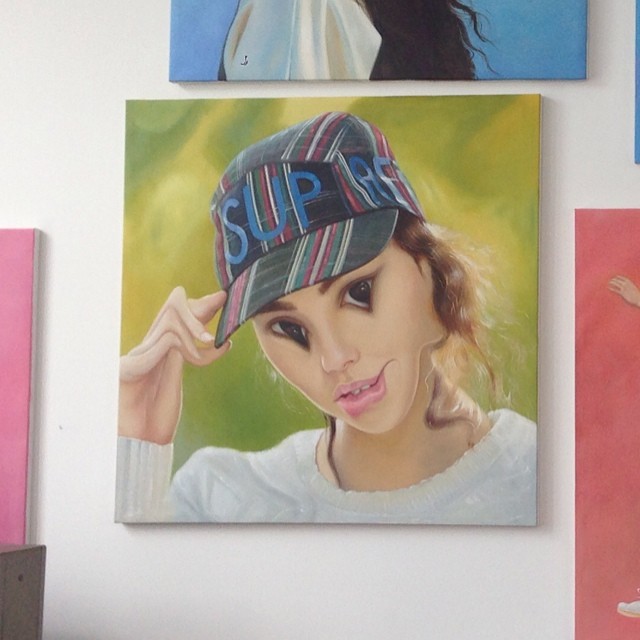 ALINA: I’m not sure if all of the paintings in the series are square. If they are, did you take them directly from [Adrianne Ho‘s] Instagram before manipulating them, rather than her website? Was this deliberate and why?
RYDER RIPPS: The paintings are squares, I screencap images from her Instagram. I see her as a true Instagram model – a lot of the images are stylized to look candid where she’s not modeling clothes as much as she modeling herself. In this sense, the fact that the photos are on Instagram is integral to the work as I want to exploit the uneasy balance between ego, commerce, self-image, and authenticity.

When did you start painting them? Why?
I’ve been working on the series for about 6 months. I make a lot of digitally-based stuff and it’s nice to have objects that can be held, that can represent my artistic ethos, etc., etc. I haven’t made much physical work because it often feels forced, [but] these paintings don’t feel forced to me. I am happy with where they sit within my own work, the current milieu, and art history. 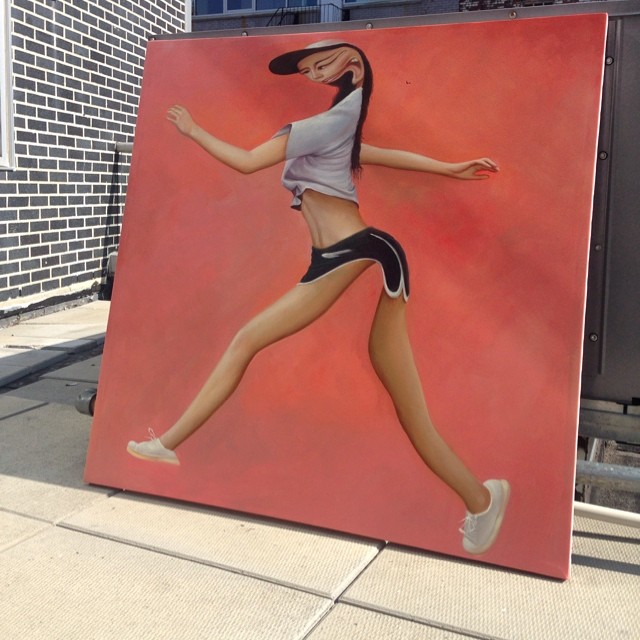 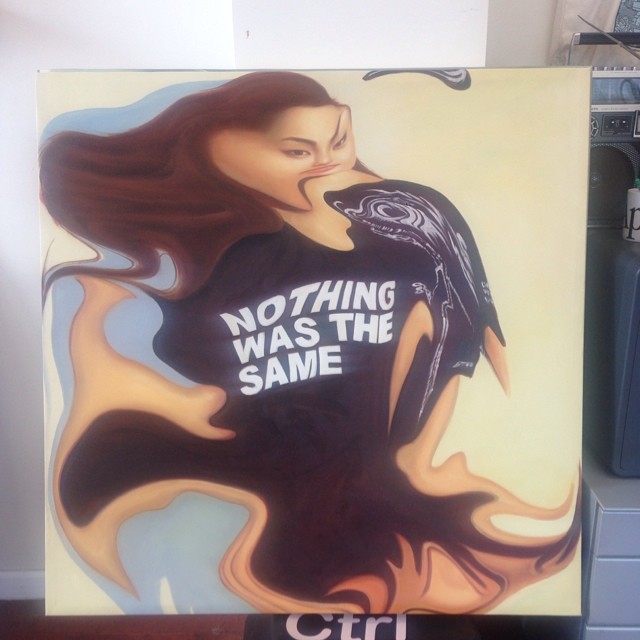 Someone asked on Instagram if this series is “anti-woman” and you said, “No, but they definitely are frustrated.” Tell us more about this frustration.
[It’s] not as clear as pure frustration, it’s more complex than that... Perhaps I started feeling it when I’d look at my ex-girlfriend’s expositional photos of herself… Actually, it was before that. But with her, it was more distilled or something. Possibly it’s a frustration with myself, doting over flesh, which then gets reversed as blame onto another. A criticism of women feeding into this primal stuff.

Someone then responded that Adrianne Ho herself is more anti-woman than your paintings are. Can you tell us a bit more on that?
One could interpret her work as providing an inaccurate summation of womanhood, lacking depth or much humanity behind the synthesized beauty shots posed naturally, purporting reality.

Can you talk a bit about the ease of navigating digital spaces in terms of your work?
There are few things that I think are better physical than in a digital form, be it image, website, or otherwise. Some things are better physical – such as jewelry, a house, or art that is intrinsically based in materiality – both conceptually and aesthetically. 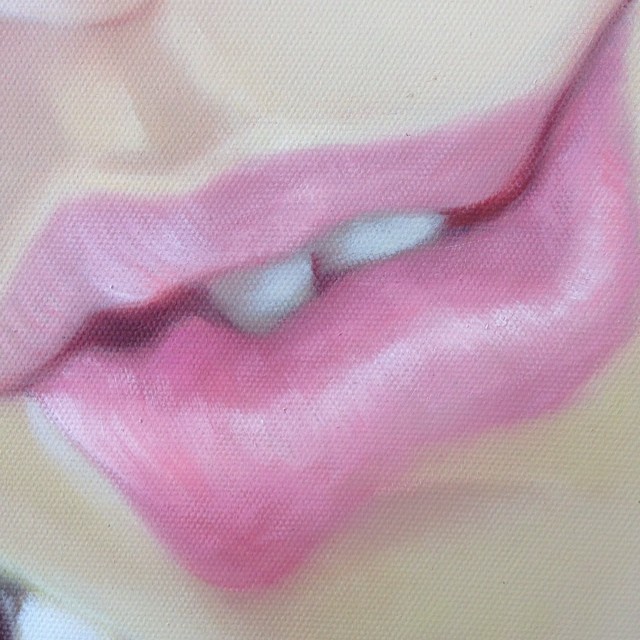 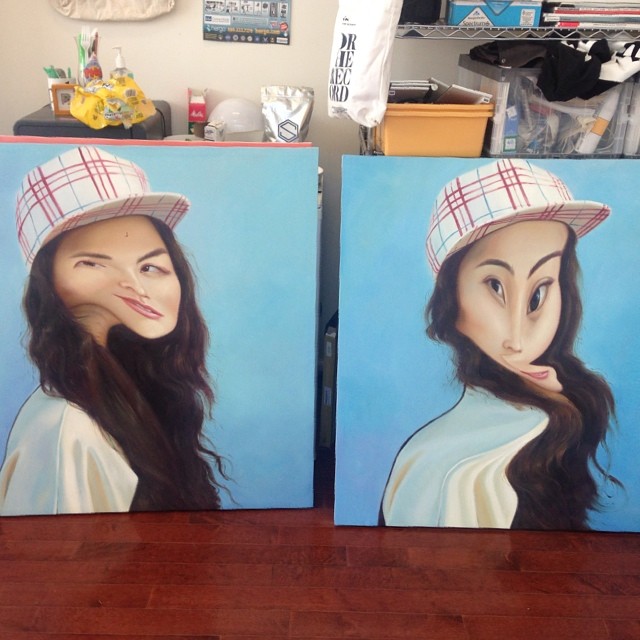 What are your thoughts on “#fit #workout #sweat #healthygirl” brands like Adrianne Ho and Jen Selter? What do you think they imply?
Their girl followers probably see it as “fitspo” and their guy followers [probably] just want to make sex with them.

How many have you painted so far? What are your plans for them?
About 10. I want the money, money and the cars. Cars and the clothes. The hoes, I suppose.

Stupid scenario: It’s 2020. Is Instagram still around? What kind of selfies are we taking? Are emojis dead? What’s trending?
Hopefully there’s something else, I’m happy to throw things out and evolve. Emojis are already dead but I think we might see post-mortem selfies. 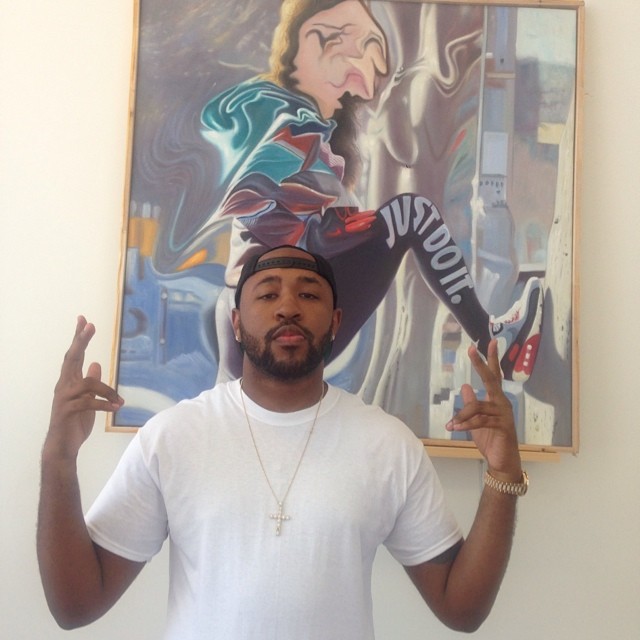 Mike Will Made It co-sign. Ryder created album art for “Buy the World.”

Do you have an interest in streetwear? What are your thoughts on streetwear?
I envy anyone who can make a living from printing a logo on a T-shirt.

What other current projects are you excited about?
PostHang.com – a sort of evolution of [an] image chat website I started in 2010, dump.fm. It allows people to share images in realtime via pubic or private rooms – a cool way to aggregate media with friends. 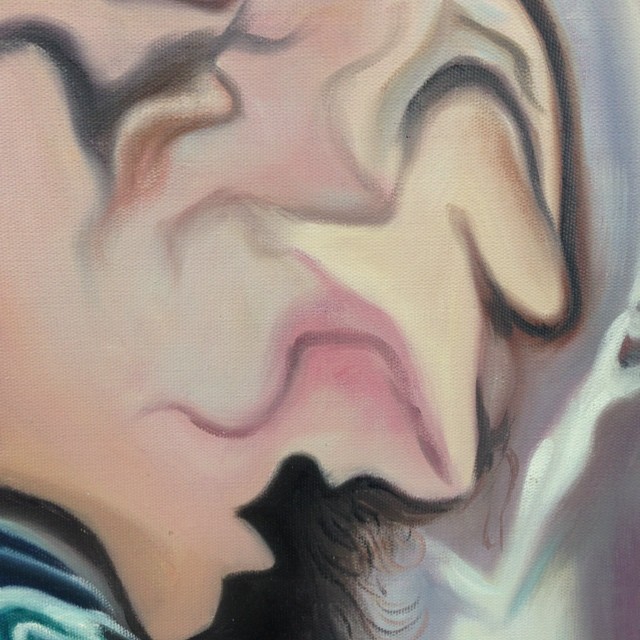 NOTE: A few days after the publishing of this article, Mr. Ripps’s Instagram was flagged and deleted mysteriously. As of August 18, it was restored after he contacted Facebook and filed a complaint.