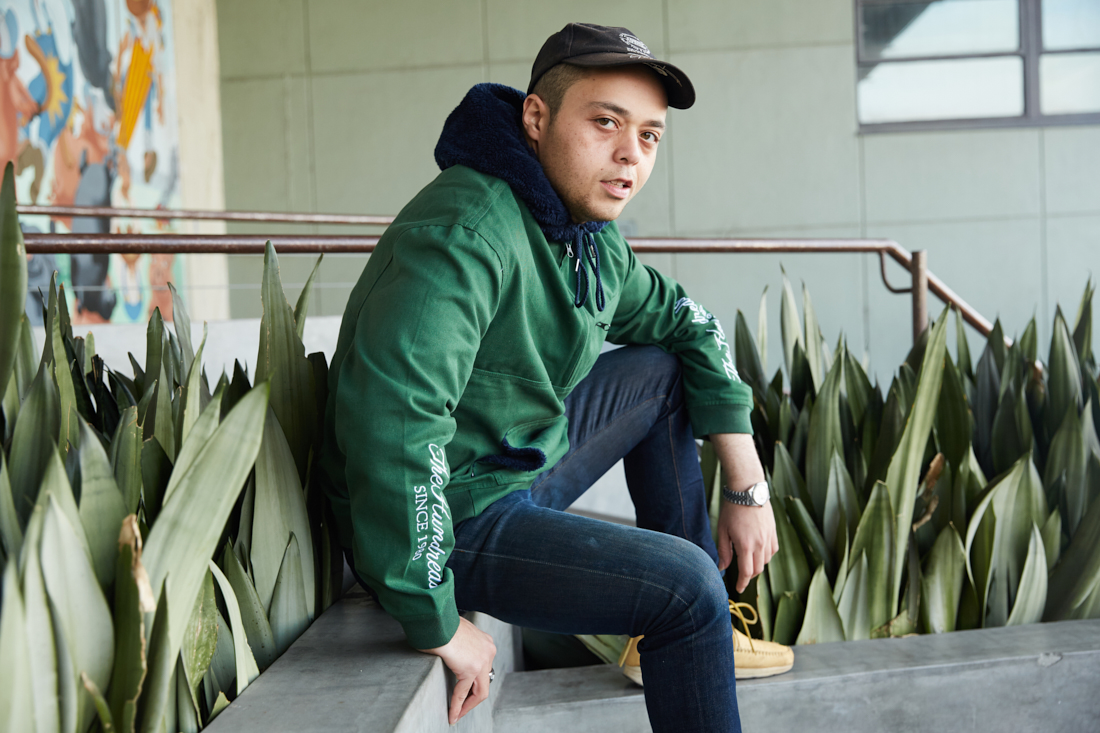 Last month, we had Alex Wiley cruise through The Hundreds HQ to talk about his new album, Tangerine Dream II. The wavy, psychedelic hip-hop project uses expert-level song sequencing and strategically placed sound effects to make the listener feel like they’re actually riding the metro train across Los Angeles. It only made sense to turn this highly experiential music into a visual piece of art to truly allow the viewer to escape reality and dive head first into Wiley’s Tangerine Dream.

And that’s exactly what Alex Wiley did, along with the film’s director, Adam Leisure.

The film runs the same half-hour as the album, acting as a real-time depiction of someone listening to the music on their commute from the city’s dreary doldrums to its beautiful beaches. With 420 coming up, there is no better time than now to switch up what you show on your projector during you annual celebration of the holiday.

Tangerine Dream II was already a trip in every sense of the world, but the film take it to a whole new level and is a highly recommended experience, especially if you can get your hands on some actual Tangerine Dream to roll up — but feel free to substitute your flower of choice.

We’re stoked to premiere the Tangerine Dream II art film on The Hundreds, so give it a watch below, and then you can find our interview with Alex Wiley and Adam Leisure following the movie.

DUKE LONDON: How did the art film come together? Had you two worked together before?
ALEX WILEY: I met Adam a few months ago and we were meeting about doing some tour visuals. We were thinking of making a full length film for another project, actually. But it was meant to be a first person experience of someone listening to the album for the first time while riding public transit. That was essentially my creative input, Adam really made the film. I had this idea of where I wanted it to go but Adam turned it into something tangible and real. I’ve always thought it would be cool to have a full-length visual to run with an album but I had never been able to do it before, so it was a really interesting process and it exists now.

ADAM LEISURE: I was really gracious to have the opportunity to work with Alex and Chris Evans and John, who are all such visionary artists. From the jump, this project was an exploration of what we could create that would be relevant to people watching and listening. We sought out to create an experience where the viewer can inhabit the actual album and be the subject of a documentary. The whole art film is designed to be a piece that is relatable to everyone who’s on this journey we call life. We used this duplicating theme throughout the film and used loops and repeated sequences to illustrate this point that life is unpredictable and sometimes loops back on itself while also expanding outwards. What makes a place like Los Angeles so beautiful is that there are so many different people coming together, so we use the train as a metaphor for the veins of the city, bringing everyone together. The underground aspect of the train at the start represents the beginning of our journey, while the beach at the end of the train ride signifies the limitless potential we possess as individual beings and as a community.

When you were making Tangerine Dream II, did you have the visual concept in mind and treat the music as a score, or did the music make you feel later on that you wanted a full visual component?
ALEX WILEY: I kind of always treat the creation of my music like I’m scoring a movie, it’s just part of my process that helps me. This is definitely something like what I was envisioning while making the music for this album. I didn’t know we were going to have an art film, but when Adam and I started talking, it just came together. I was only about 70 percent done with the album at that point, so it was cool that I was able to finish the recording process with that visual in mind. All the train audio on the album is that actual audio we captured while making the film. It was cool because the two projects were feeding into each other, and it made it feel like one thing. And we wanted it to feel like listening to the album in real time, so five minutes of the album would be five minutes on the train, rather than have it be highly edited.

I’ve always thought it would be cool to have a full-length visual to run with an album but I had never been able to do it before, so it was a really interesting process and it exists now.

ADAM LEISURE: From a technical standpoint, I’ll speak a little bit on what we had to do to achieve what Alex was just talking about. We wanted to achieve a first person experience where the viewer felt like they were in the film. We chose our camera systems based around that central idea. We used three cameras primarily to create this film. One was a pair of spy glasses that have a standard definition hidden camera in them. This allowed our main actress to truly give us her point of view without having to bring a whole film crew on the train. Beyond that, we used an iPhone for a lot of the shots because most of us take in the world around us through that same lens. We wanted to augment the POV shots with shots that you would actually see someone post. We thought those two camera techniques would help the viewer wear the shoes of the subject.

Had you ever seen any full length music visuals that helped inspire this process?
ALEX WILEY: The Frank Ocean Endless thing was not not an inspiration. Not necessarily the specific concept, but just the idea of having a passive and abstract freeform full length visual paired with the project.

ADAM LEISURE: I definitely drew inspiration from a film called Koyaanisqatsi, which is a Hopi word translates to “life out of balance.” It was actually the first film of that type, made by composer Philip Glass and director Godfrey Reggio. The way they made it was splitting up the artistic responsibility, where Glass scored it and Reggio cut it in a way that told the story of humanity as a whole, and our way of treating the planet had created a life out of balance. It’s a really dope movie and a huge influence on me for this. There were definitely parallels where we continued that film’s legacy by creating the score and the film concurrently.

How did you work together to make sure the two pieces felt like one?
ADAM LEISURE: We worked really closely on the entirety of the project. Alex and Chris were on set with me the whole time and in the lab with me in post-production. Alex wanted to make sure it felt more textural and have less fine details, so we tried to find organic textures around the city to theme the imagery for the film.

When you take this on tour, Alex, how will you translate this experience to a live audience?
ALEX WILEY: I think we’re going to have some narration, I’ll do some voiceovers in my “train conductor” voice and we’ll sprinkle them in every three or four songs as live interludes. I’m still working on it but it’ll be pretty cool. The super original concept from meeting one was based around the live performance and having a visual aspect to the performance. We wanted a whole live set to feel like an entire train ride, and each song would be a stop.