In 2014, while mourning the passing of two legends – Joan Rivers & Robin Williams – Jensen realized something troubling: He had never seen Don Rickles perform live. This is his essay about heroes and mortality. Yesterday, Don Rickles passed away.

When Derek Jeter recently played his final inning at Yankee Stadium, he hit a walk-off single to win the game in the bottom of the 9th inning. For those who aren’t big baseball  fans, that’s a situation so unbelievable I could only imagine it in one of those piece of shit Nicholas Sparks movies. Michael Jordan ended his career on the Wizards playing mediocre basketball, not making the playoffs and missing a breakaway dunk in the 2002 All-Star Game. It was like watching one of those Sara McLachlan ASPCA commercials but with the guy from Space Jam needing help. Basically, you can be a Jeter or a Jordan when you call it quits. Jerry Seinfeld or anyone from the TV show Heroes. No one wants to be Madonna with those weird veiny arms, dressed in Forever 21 gear and just trying to stay relevant with “shocking” moments. I always thought you either left on top or left too late, but then I saw my hero in Las Vegas this month, and I realized it’s not that cut and dry.

With the recent unexpected deaths of Joan Rivers and Robin Williams, I couldn’t help but selfishly be disappointed that I was unable to see either of those two comedians live. I considered Joan Rivers in The Muppets Take Manhattan one of the first times I uncontrollably laughed as a child, and Robin Williams shaped my youth the same way he probably did yours. Opportunities missed had me bummed, especially after seeing how many of my friends posted on Twitter about seeing either –or both – of them on stage at some point. While mourning these two legends, I realized something extremely troubling: I had never seen Don Rickles perform live. 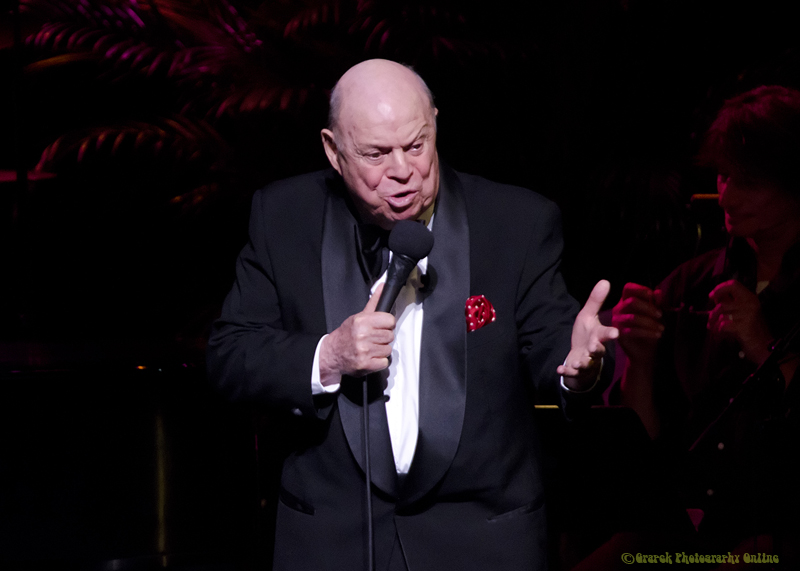 Rickles, now 88-years-old, is my comedic hero, and I put him on a shortlist of entertainers that will make me cry when they pass away (Vin Scully and Howard Stern round out that real uplifting group). My father saw Rickles perform a number of times in the Catskill Mountains, where my dad was a waiter in his early 20s, so he was quick to introduce his work to me at an early age. “Mr. Warmth,” as he’s lovingly called, is the master of crowd work, insulting audience members through attacks on race, appearance, and basically anything you’re afraid he’ll mention. And no matter what the man said, or how offensive he got, his infectious smile let you know it was all in good fun. “If I were to insult people and mean it, that wouldn’t be funny,” Rickles once said.  “There is a difference between an actual insult and just having fun.” His routine at Ronald Reagan’s 2nd Inaugural Gala should be shown to anyone who’s ever thought they were funny, just to show them they aren’t really THAT funny. Spike TV recently produced a televised event to honor the funnyman and they got Jerry Seinfeld, David Letterman, Tina Fey, Eddie Murphy, and Bill Cosby to participate. Considering Spike usually just airs a show about a dude who transforms crappy bars, that’s a huge deal. His quickness and lovable persona helped him become, in my opinion, the greatest talk show guest of all-time, but is mostly now known as the voice of Mr. Potato Head in the Toy Story movies. He is an American treasure, and still regularly performs in Los Angeles and Las Vegas, despite whispers of waning health. I knew that I could no longer wait. I didn’t want to miss my chance. I’ve actually talked about getting a Don Rickles tattoo, so yeah, it’s like that. I decided to make the trip to Las Vegas to see him live and eliminate that possible regret from my life.

As I took my seat in The Orleans theater, I started to feel the importance of what I was about to witness. Don always takes the stage with the Spanish matador theme, “La Virgen de la Macarena” playing, since he once said, “I always pictured myself facing the audience as the matador.” I was pretty sure I wouldn’t be able to keep my shit together once it started. The theater was filled by mostly an older crowd familiar with his Rat Pack days, but mixed amongst them were younger fans that have taken to his later work and celebrate his nostalgia. I was happy to see and catch up with graffiti legend Richie “SEEN” Mirando, who himself is a New York staple and as obsessed with Don as I am. He revealed that he had tickets to Rickles’s last scheduled performance at The Orleans, but it was cancelled for a reason never really stated, but I can now guess. 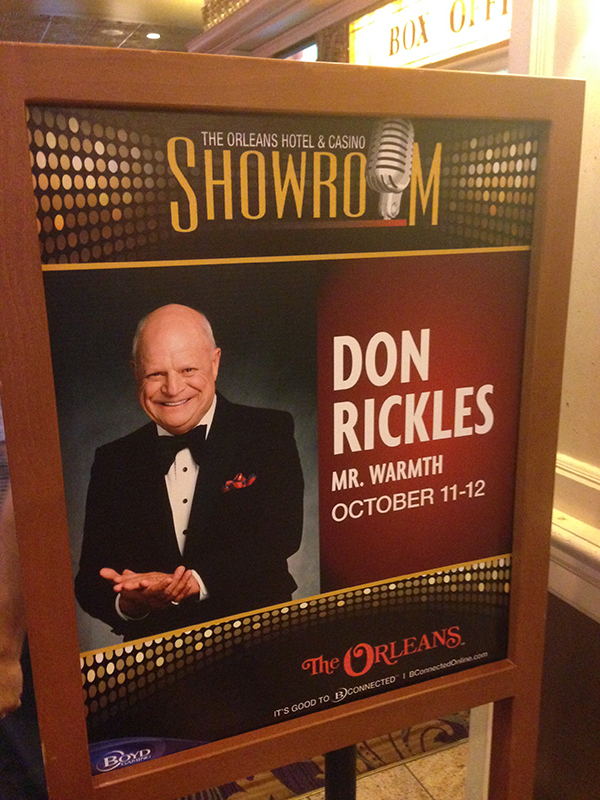 And after some music from the orchestra, a large group that would join him the whole night, the matador theme started and I was standing and applauding, crying just a little. In the middle of the stage sat Don Rickles, clearly older-looking than most of the audience had expected, but still with the signature presence that owned any arena he stepped into. He explained he had to sit because of a health issue (he pointed to his knee), but still tried to maneuver around the stage unsuccessfully a few times throughout the night. There were small patches of the show that revealed little to no wear, as he threw perfectly-directed jabs at the first few rows, thanking a man in shorts for dressing up. He told one Polish man he was happy to see him, because “Pollocks” usually stand in the corner facing the wall asking where the show is. Clips from his most famous appearances and routines played as the first break, which may have made the rest of the show slightly harder to watch. His voice would become overpoweringly raspy after 30 seconds of song – something he broke into 3-4 times over the course of the night. This made a majority of lyrics and later jokes completely inaudible. He’d take a sip of water and get a few minutes of clarity, only to fall back into a place where I don’t believe the audience understood anything he was saying. He also repeated a few routines, catching himself a little too late, which was the second time I teared up during the show. But no matter how flawed Rickles and his act became, when the man seated next to me tried to talk to me and insult the show, I have never come so close to punching someone in the face. 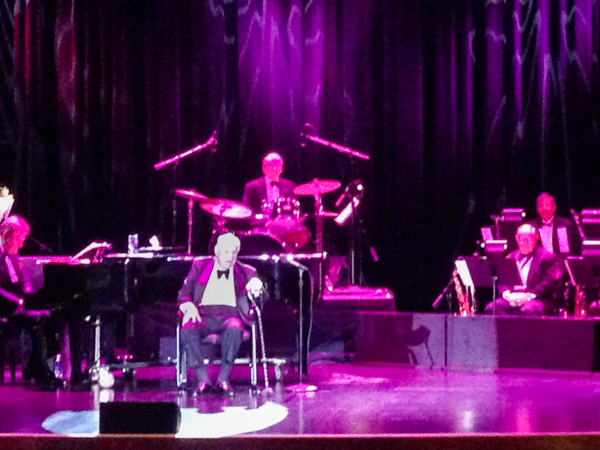 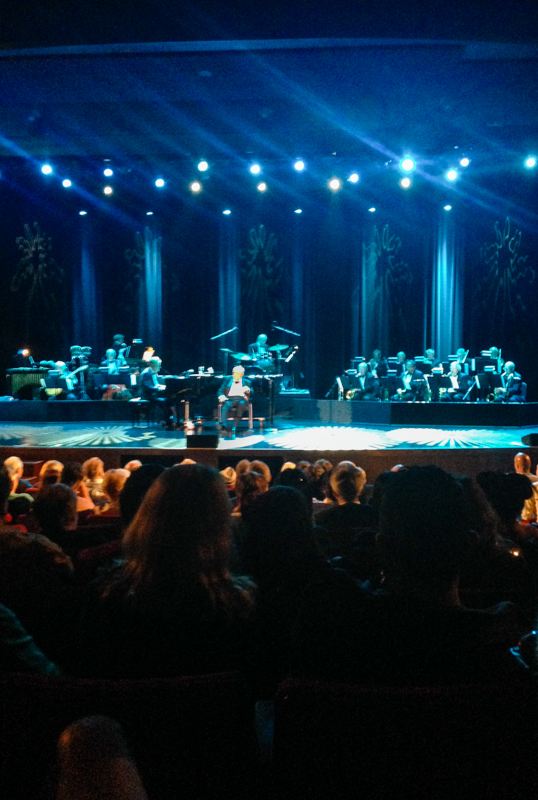 As much as I don’t want to say it, I saw a wildly older and more defeated man than I fell in love with on TV over the past 3 decades. I didn’t want to admit it as I walked out of the theater with my friend Matty, who made the pilgrimage with me for the same exact reason as I did, but it’s true. I fully ignored the other concertgoers in the taxi line as they badmouthed the performance and laughed at the steps he missed. I don’t want to disregard their feelings – as in most cases they paid the same premium price as I did – but I think they’re dead wrong. I wanted to turn around and say, “You have to be fucking kidding me!”

I attended “An Evening With Don Rickles” to pay my respect, to applaud him while I still could. When he announced he’d be appearing on Jimmy Kimmel Live! December 1st and returning to The Orleans in February at the end of the show, he added a “god willing,” which stung my soul. Seeing Don Rickles AT ALL, is better than never seeing Don Rickles. And just like that, I changed my opinion on “walking away.” Sure, watching Derek Jeter basically be carried off the field and into retirement was an unreal sight to behold, but just because Michael Jordan left the game in a slightly less triumphant way than he would’ve liked doesn’t make his journey any less important. He wanted to keep playing, so he did. And people wanted to see him. Let him make that decision since it’s his journey, and his alone. At one point, early on in the night, Rickles made the audience promise that no matter how old we get, we’d continue to keep working, forcing our brains to work hard. I’m sure that sentence was mocked by the jerks behind me in line, waiting to return to their hotels or homes, but I took it to heart. Cause we’re all gonna be there one day. We all paid to see Don Rickles, and we saw Don Rickles. And I’m so happy I did, because a lot of Pollocks stand in the corner, facing the wa... I said this already, didn’t I?