The Internet has been as good for streetwear as it has for other niche interest cultures. People get access to more brands, more information, more stores, more fucking everything. The world is smaller. Like a drone can deliver clean water and affordable medical supplies to a third world country, a guy sitting in his studio apartment in Nebraska can buy a box logo hoodie from 2003. Thank you Jesus. For the first time, people living outside of major cities can get an easy culture fix online. And while access to all this knowledge and ability to share should be helping the streetwear community thrive (in plenty of ways, it has: Grailed has created the first truly visible, stable secondary market menswear has ever seen, while streetwear and sneaker culture have permeated their way into the pages of GQ, Vogue, and the fashion industry at large), it’s also creating—as it does in the cultures of sports, politics, what have you—deeply rooted fan communities dedicated first and foremost to protecting what they fuck with.

Internet culture is constantly reinforcing our desire for instant gratification. We wait moments, not hours or days, for news. Really, the news never ends. It’s functioning at its purest and highest capacity when there is no real news to be had. We mainline new seasons of television in a day, and the end of every franchise movie features a post-credits scene for the next one, putting all the focus on anticipation instead of gratitude, instead of riding the thrill of the thing we just got. There’s no time to process or digest, and that encourages the worst in us: defensive, knee-jerk responses. It discourages discourse. We pick sides, sometimes needlessly, and don’t leave a lot of room for compromise.

And this is how hate starts to thrive. It’s why there’s no actual bipartisanship in government (e.g. the GOP refuses to hear Obama’s supreme court nominee), why sports fans beat the shit out of each other in parking lots after games, why gamers send women death threats, and why a Bape stan runs around New York assaulting people rocking Supreme. His shtick is completely based on an “us versus them” mentality and the in-the-new viral nature of the attacks. YMBape is streetwear’s Trump. He is a bully, non-content as content, and he’s a bad look for all of us. 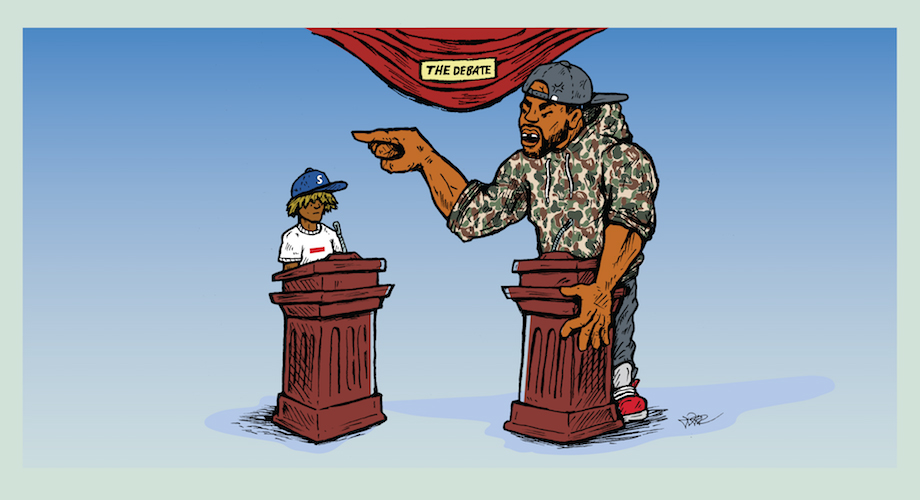 Obviously, YMBape isn’t pure, unadulterated evil like Trump—he’s just a one-dimensional ham. The Ape’s fleeting moments of fame won’t really have any true, longstanding impact on the culture, but he was a manifestation of the same malicious mindset that’s allowed Trump to flourish in his own. Like Trump, YMBape is an of-the-moment monster. In an age when nostalgia and collaboration are thriving, he’s pitting two staples against each other. One is experiencing a resurgence now that everyone who saw and wanted Bape 10 years ago can afford it; the other, a brand that has only recently crossed over, no small part in thanks to the optics focused on streetwear these days. Thirst for manufactured confrontation, it turns out, is as high as it is for limited collabs.

Trump’s voters, those of the “non-deplorable” variety (people who at least seem like they aren’t just in it for the blind and uninhibited display of hate), believe they’re bearing witness to a fiery harbinger of change, descending upon America to smite the unworthy and return the nation to some imagined dreamscape of former glory. In reality, a loudmouth who spent decades mastering the art of celebrity has shanghaied a flailing political institution—famous recently for enabling sexism, racism, and religious superstition—into doing his bidding. Trump supporters are so mad about right now that they don’t care what happened before Trump was running, and certainly don’t care to analyze what will happen if he actually gets elected. He’s just so hot right now. Viral videos are the same way, framed completely within a moment: no focus on potential setup beforehand or consequence afterward.

Streetwear doesn’t have elections, but it has videographers all over the place. It also has people willing to do a lot for fame: some guys will destroy a pair of Yeezys they could otherwise sell to pay a month’s rent, others will fight unsuspecting strangers for wearing a shirt. In the case of the latter, you get the Ape: a guy with a seeming love for OG streetwear culture, spewing vitriol at droves of Supreme fans, who’ve recently gained a reputation as ignorant hypebeasts and petulant weirdos with nothing better to do than spend days in line on a sidewalk—many of whom seem obnoxiously young to afford the ability to do so. And it’s not like he’s some jocular motherfucker—YMBape has malicious intent and you know it right away. He’s either baiting people verbally (when some random stranger starts talking shit to you in a crowded place, are you more likely to engage in an enlightened conversation, or clap back and try to move along with your day?) or straight up assaulting them by kicking their shit, knocking hats off their heads, and actually just shoving them. It wasn’t even creative trolling.

And not all press is good press. Let’s not pretend that in 2016 any legit company wants an unofficial mascot wheeling around town harassing potential customers. Burger King would not want someone dressed as the King attacking people eating McDonald’s. In fact, Burger King wants McDonald’s on the same block because it brings more people around. Bape wasn’t quick to denounce the Ape, but eventually did, referring to him as “disrespectful” and “a nuisance.” As many traditional Republicans have been steadfast in their denunciation of Trump, Bape knew cheap buzz was not worth its long term fallout (their denunciation hilariously names neither YMBape nor Supreme by name). If you’re them, the incidents are as embarrassing for the Bathing Ape brand as for anyone involved—probably more so.

We’re living in an age when people walk into movie theaters, elementary schools, and churches to gun down strangers and children. Inciting violence in public is less acceptable and more socially irresponsible than ever, especially when the people you’re attacking are members of the same interested party. But that’s what we’ve come to expect. Trump has “fellow Republican” Ted Cruz groveling at his feet, endorsing Trump despite the fact Trump insinuated Cruz’s father was involved in the JFK assassination and on more than one occasion criticized Cruz’s wife’s appearance. On the other side of things, plenty of Hillary supporters and Bernie supporters hate the shit out of each other. It’s embarrassing. The world is shrinking, potentially to our benefit, and we’re out here sowing the seeds of hate and dissent as efficiently as ever, often especially so with those who should be our closest allies.

Here’s the worse news: streetwear is not seen by many outsiders as a legitimate hobby/interest/pursuit—it’s frivolous bullshit. Over the past year, the only thing helping the streetwear culture cross over into the popular discourse is “which Kanye product are a bunch of internet trolls and desperate virgins lining up to throw money at this month?” Not a great look, and it’s more terrible for the next biggest story to be “fan of X brand goes viral for taunting fans of X brand, eventually gets his ass beat.” As if throwing endless paychecks at brands we owe nothing to didn’t make us look dumb enough. We need some good press.

But as out of hand as this whole situation was, it isn’t all bad. Things did not end well for YMBape. A bunch of guys wailed on him in the middle of traffic and left him crumpled against the side of a taxi. His shirt was turned partially inside out and pulled over his head. It was extremely embarrassing. A few days later, he was arrested in front of KITH, protesting as he was surrounded by officers and then cuffed while he was facedown on the hood of a Crown Vic. Like other videos he’d starred in, it was an undignified mess. God willing, we’ll be telling a similar tale about Trump in November.

“Monster” might be a little broad of a term—unforgiving and a bit of a deflection. If we’re categorizing them, Trump and YMBape could both fall “golem.” At the end of the day, they’re creations of the institutions they’re terrorizing. It’s where all the power comes from. Fifteen minutes of fame turns into something else, something that’s different than it was when it started, something we can’t control. We’re early enough in streetwear’s crossover into the popular zeitgeist that YMBape does not have to be a harbinger of worse things to come. He’s the first fully modern instance of “streetwear gone wrong,” an example for the rest of us. That he was bad for the culture did not mean he was not of it. His existence and demise signal just how ridiculous things have gotten.

I'm still an Ape nigga and I'm still #bangingonmychest 800 RT's and I'll violate the Bape store on the next drop.

A Ferrari enthusiast doesn’t park, hop out of his 430, and go down the block keying every Lamborghini he sees, with their drivers nearby, while his friend is filming the whole thing. That sounds crazy. It would make luxury car drivers seem even pettier and more wasteful to people not into luxury cars. And I hazard to guess that even if this did happen, the collective car enthusiasts of the world and the online publications they frequented would not be huddled around their computer screens sensationalizing the situation. The Ferrari guy would just be in jail, and other car owners would think, “This is why we can’t have nice things.”

But streetwear (like politics) might be too competitive for that. Consumers’ streetwear interests are based in regionalism, musical taste, budget, access, trendiness, pop culture obsessions, hobbies, and employment. These areas are too rich and too divergent to create an incident-free environment. The theoretical Venn diagram of crossover interests within streetwear is endless and terrifying, a labyrinth of horrors. So every now and then, we will fight. Throw in that we have to deal with—resellers, bots, bootleggers, and our parents telling us we are too old to wear graphic tees—and you’ve got yourself a real fucking mess. Sometimes, you get a troll dumb enough to attack people in the street. Bobby Hundreds
I finally watched Dawn of the Rise of the Revenge of the Planet of the Apes Strike Back, a special effects cereal bowl of one man’s borderline homoerotic bestial relationship with a gorilla.  And o...