The West LA Courthouse, better known as the, “Santa Monica Courthouse,” is as close as you can get to a historic landmark for skateboarding. The Rucker Park for skaters was a go-to spot and a proving ground for many during the golden era of street skating during the mid-’90s into early 2000s. Famous for having a multitude of ledges, an empty fountain, a four stair set, and a stage – made the Courthouse one of the most popular and iconic skate locations. Pros and amateurs alike from around the world have often made the pilgrimage to this spot to skate. Back in high school, my friends and I would make the journey to LA, often ending up sitting on our skateboards and watching as the locals and pros would do tricks that we only would see when the latest skate video on VHS would be released: nollie tailslides, nollie heel flips to nose manuals on the stage, and every flip trick imaginable down into the fountain.

Many memories from this skate mecca are still stuck in my mind from Eric Koston’s part in Girl’s, “Goldfish” circa ’93 to Ronnie Creager’s part in World Industries, “Trilogy.” This location has undergone its trials and tribulations for skaters, from having it skate-proofed with knobs on each ledge and on the stage, to the removal of the fountain. The courthouse itself had its courtrooms closed due to budget cuts back in 2012.

Which brings up this year’s Go Skateboarding Day, where the question was raised: “What if… Nike re-opened a celebratory skate location to celebrate?” to the response, “Why not? And why not West LA Courthouse.” The wheels kept spinning, and with the help of the city, the spot was revitalized with the removal of the knobs and a fresh coat of paint for the weekend. The push continued, and this past Friday, the city along with Nike has reopened the legendary location as a public skate plaza.

Freshly painted and un-knobbed ledges are now buttery smooth, artwork by Geoff McFetridge adorns the stage, and skateboarding is now legal. The reopening event featured Nike pros Eric Koston, Paul Rodriguez, Theotis Beasley along with a few other skaters that helped immortalize the location along with city council members.

I arrived just as the sun was setting to see the newly painted ledges.

The stage at the West LA Courthouse is such an iconic piece of skateboarding history and even more so now with artwork by LA-based skateboarder and artist, Geoff McFetridge.

The skate community rallied together to witness the re-opening.  Skaters such as Sean Malto, Theotis Beasley, Daniel Castillo, and Richard Mulder were amongst the many that attended. 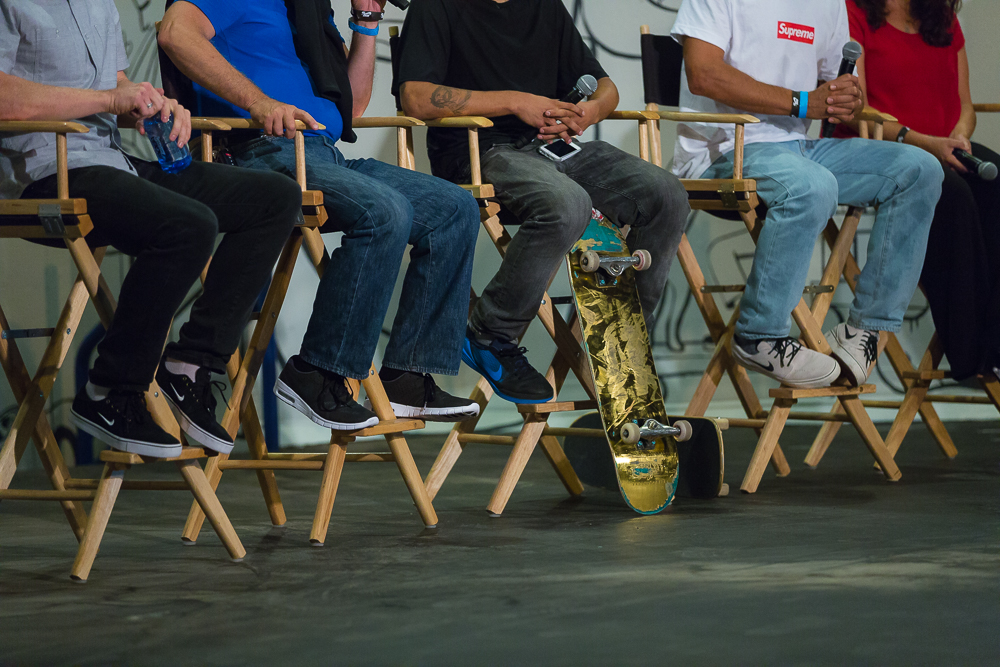 One of the best street skaters of all-time, Eric Koston, addressed the crowd on what it meant to be re-opening this classic spot.

West LA Neighborhood Council Chair, Jay Handal, alongside Nike SB athletes, Eric Koston and Paul Rodriguez were part of the instrumental group to help bring skateboarding back to the courthouse.

A collection of the many styles of Nike SB’s were spotted from the signature Paul Rodriguez, “Citadel,” to Nike SB Zoom Stefan Janowskis.

Since I arrived a little late I missed out on the opportunity to shoot more action.  So here are a couple shots courtesy of Nike SB shot by Axis Photography:

Van Styles chimes in on the importance of public skate plazas, namely JKwon plaza in Koreatown, Los Angeles: “R.I.P.” aka “ripping in plazas.”