Through the Viewfinder :: Andrea DoSouto

Through the Viewfinder is a new photography series where we ask photographers to share the stories behind a few of their favorite photos.

Andrea DoSouto is one of the most interesting photographers that I know. Born in the small fishing and agricultural town of Galincia on the coast of Spain, Andrea began shooting at 16 when she was still in high school. Her friends were all skateboarding and rapping at the time, so she began documenting the lifestyle and culture that went hand-in-hand with that. At 18, Andrea decided to spend the summer in Barcelona, where she fell in love with the city and decided to stay and study photography—and would later go on to complete a post-graduate program in photo journalism. She lived between Macba and Parallel—two of Barcelona’s most famous skate spots—which allowed her to hone her skills shooting the locals and learning valuable techniques from visiting photographers. At the time, Barcelona was the number one destination for skateboarders in the world—which allowed Andrea to create a network of friends from all over the globe. 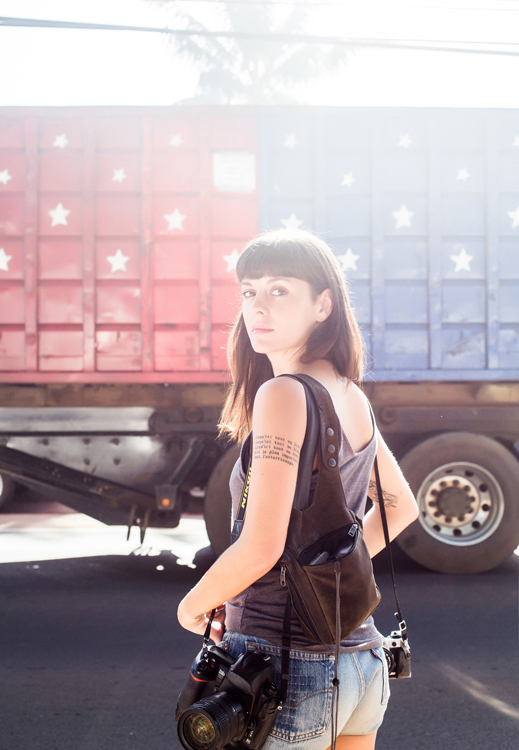 When she was done with school, Andrea began traveling on skate trips with friends, and, eventually, her photos started popping up in magazines. Despite living in an ideal place, making it was far from easy for her. Being a female shooting a male-dominated culture caused people to not take Andrea as seriously as she would have liked—but she persevered. Eventually, Andrea made her way to Los Angeles where she would travel back and forth for many years before settling there in 2015. Currently, Andrea is an RVCA activist and shoots freelance for a variety of brands in both skateboarding and streetwear. Andrea’s next big project consists of compiling a book of her work from the past 10 years in 2016.

Being a female that grew up shooting skate and street culture, Andrea has a unique eye that shows in her work. We sat down with her to get the stories behind a few of her favorite photos—all of which have their own tale to tell. 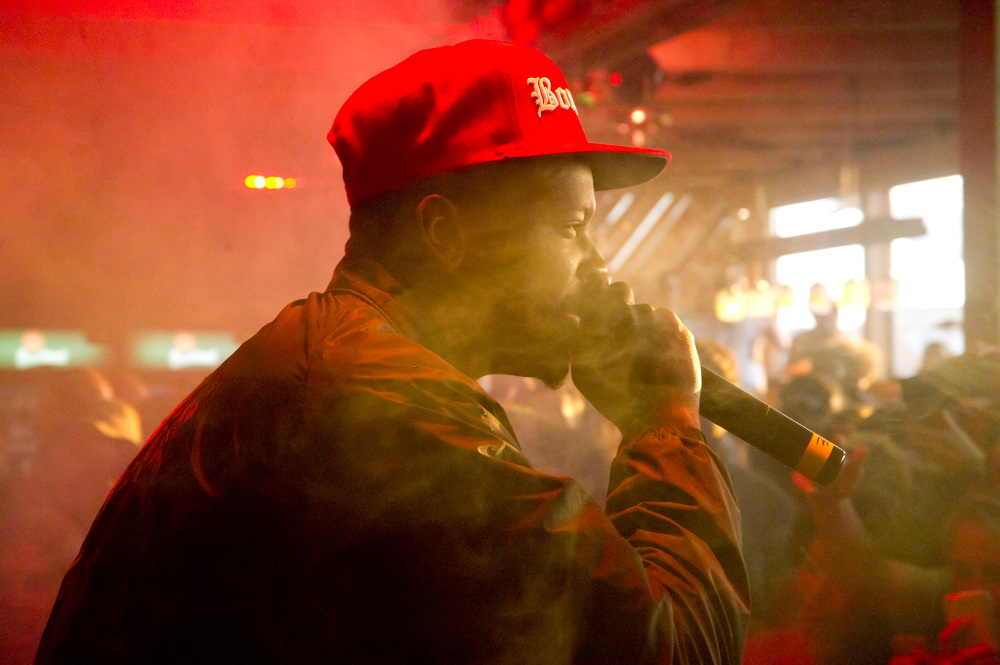 RVCA did a capsule collaboration with YG in 2014, and I had been traveling in Europe for RVCA to shoot all of the skateboard events. YG happened to have a show with RVCA in Berlin during the Bright Tradeshow. I had just come from the Mystic Cup in Prague. It was raining, and they forgot to rent me a room. I showed up with two huge bags at the venue where the concert was happening. I put my bags in the back of the bar, made my way to the stage in front of everyone, and hopped up and got the shot. It was crazy to roll in like that, but I knew I needed to get this photo. 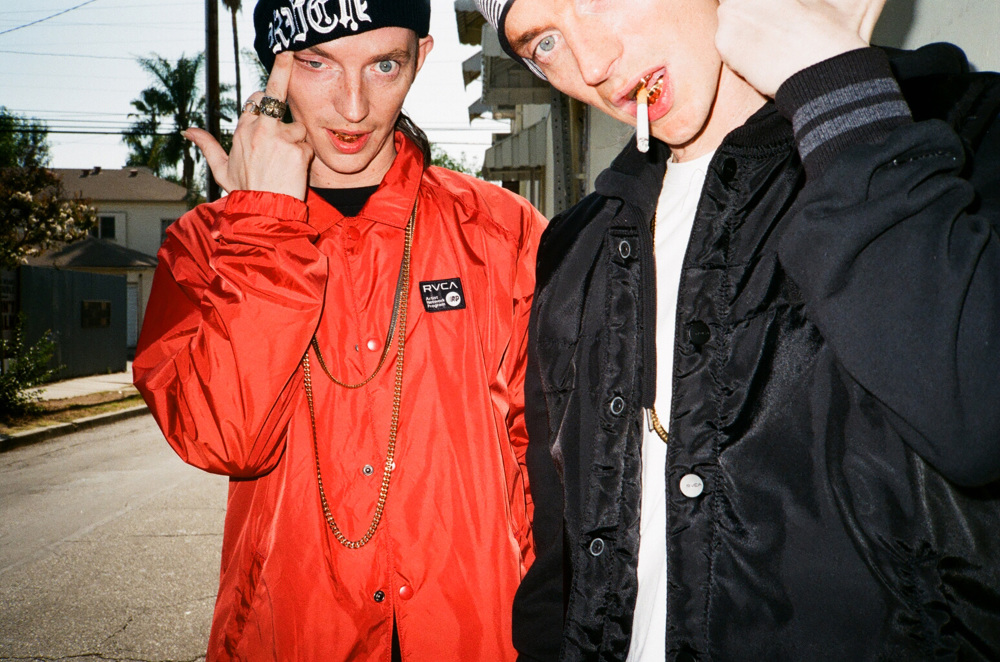 This one was kind of crazy. I was having a goodbye party because I was going to Europe for the summer. I told everyone to all come to Kibits and get some drinks. A lot of random people showed up, but the most random of all of them was definitely The Twins. They just wilded out at the bar, and told me my stuff was cool and that we should meet up and get some photos. A couple of days later, I met up with them on Fairfax and made a little RVCA package for them and we just walked around and got some shots. They flirted with every girl in the store, and invited me to a hotel party later—they’re wild. 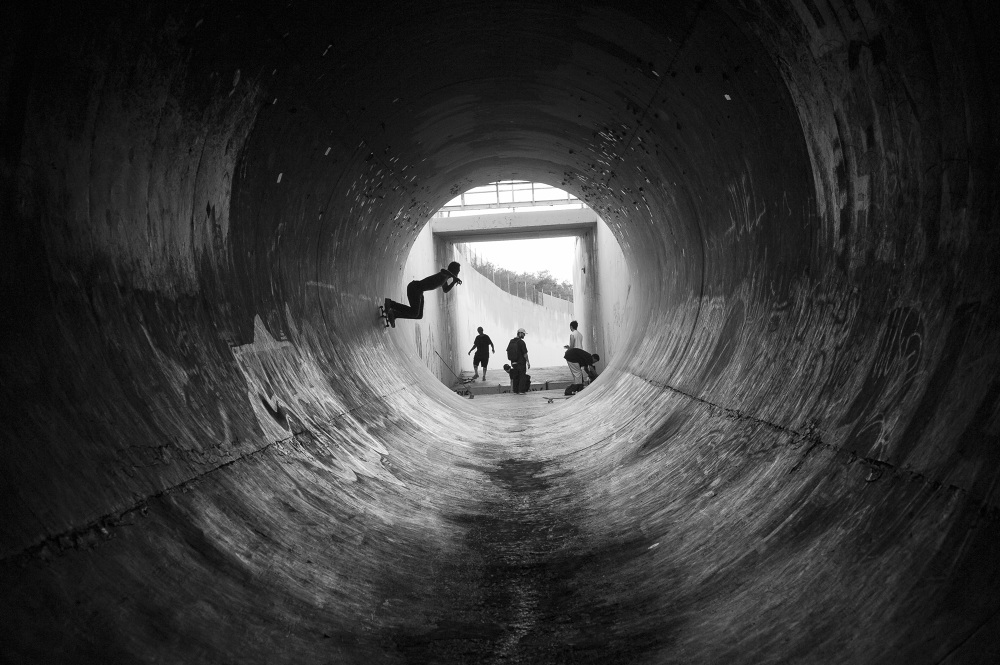 The guy in the fullpipe is this guy Steven from Venice. He mainly does more modeling and stuff like that, but he also skates. Some of the guys from Supreme and Crooks and Castles had their Sunday free, and they all wanted to go explore this place. It was pretty crazy because you have to jump this really big gap to get to the pipe. Before we went, they asked me if I could jump the gap, and I was like, “Bro, I’ve been jumping stuff since forever. I’m probably in better shape than you are.” We went and I was probably the second one to jump it—but they were all struggling. One of them actually hurt himself, and we thought we would lose him in the hole. He actually couldn’t skate after that, and we had to sort of carry him on the way back. It was cool though, we brought some beers and put hot sauce in them and had a nice Sunday at the pipe. 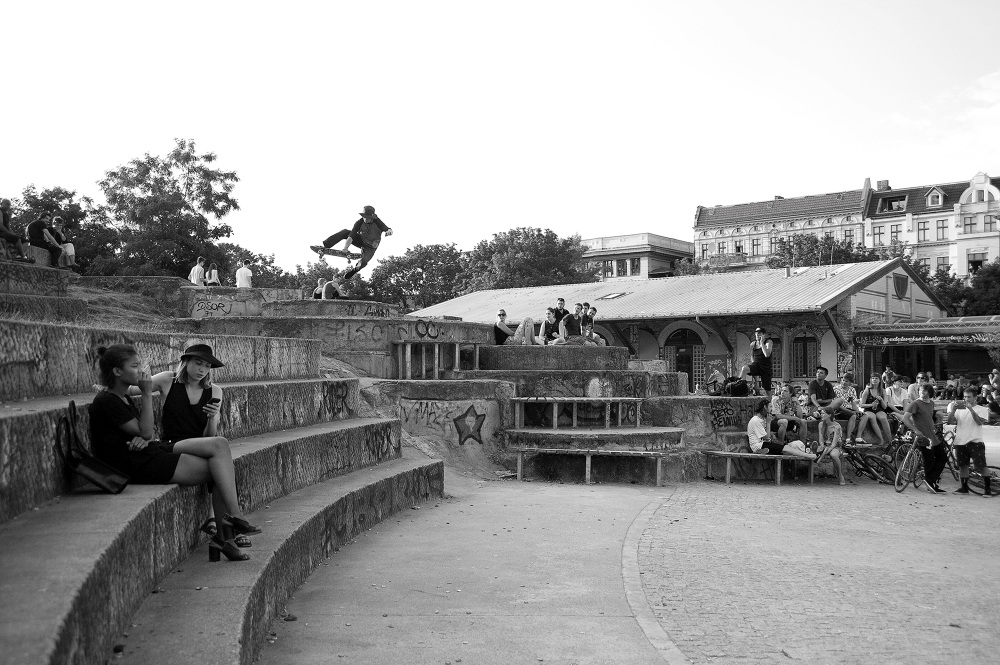 This was in Berlin. Sessions in Europe are way more open—just a lot of people hanging and going from one spot to another. In Berlin, they have a lot of bicycles. You can’t really skate from one spot to another, but you can go on bicycles. People in Europe are more socialized about plazas and open space—people just hang out when there’s good weather. So, this was one of those plazas in Berlin where people meet up during the summers. You can’t tell from the photo, but the ground is really rough—so, that’s a really hardcore trick to do there. This was during the last hour of light, and Oscar wanted to get the trick because he had always wanted to do that there—so we ended up getting it with all of the people hanging out in the background. 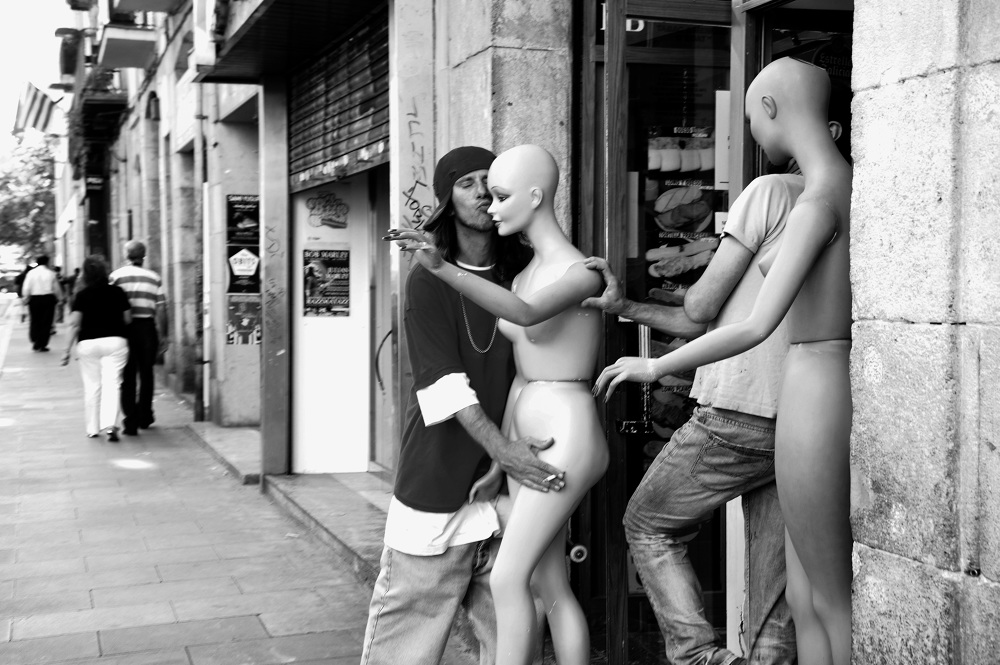 Tom was staying at my house for a couple of months—that’s actually the street that went straight to my house. He was pretty inactive for a while, but he would always come to Barcelona and we always got along really well. One day, I got a message from Tom’s friend saying that he wanted a girl to shoot his cover, asking if I could do it. So, we spent a good amount of time together shooting. He has a really English humor—he also loves women, and, like most guys, he expresses that often. We were going to a spot or maybe coming from skating, and these guys just happened to be taking the mannequins out and getting new ones—Tom ended up posing with that one. I always have my camera on my arm, so I just captured the moment. 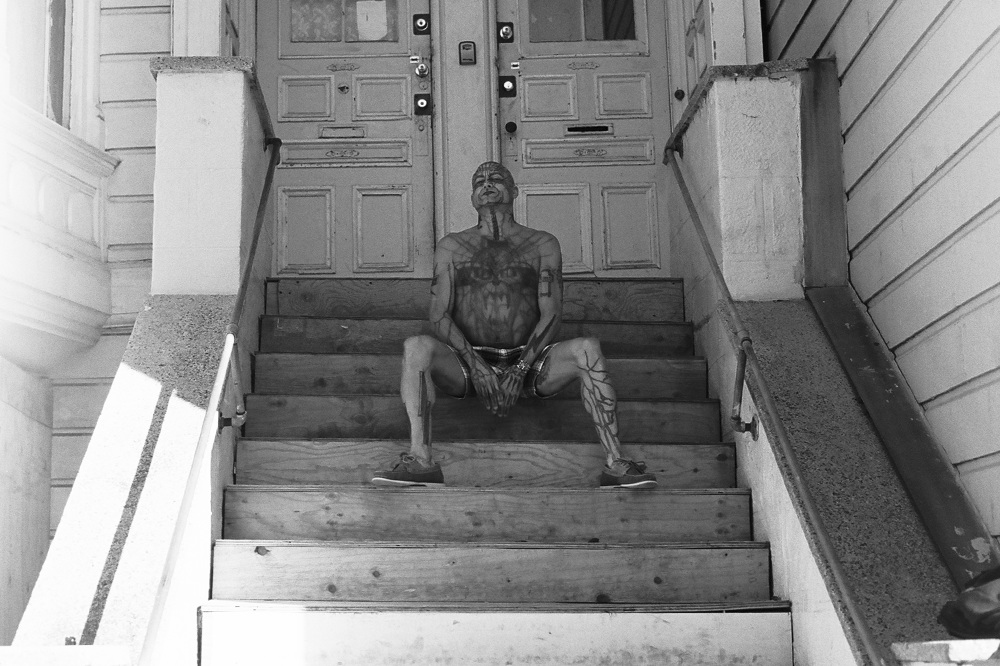 I was staying in San Francisco. One summer, Ando from FTC rented a room in my house and bunch of the San Francisco guys came and stayed for a couple of months. I became really good friends with them, so I was going back and forth between LA and San Francisco. I was hanging out in the Mission and I saw this guy and thought, “I need to get a photo of him!” I always approach people in a certain way. I studied photo journalism, so I’m really conscious of what I should shoot and shouldn’t. I just went up to him and said, “Man, what are you doing here? You look sick!” I was also shooting film—which is kind of better because you don’t have to show the photo and have them say, “Delete it, I don’t like it.” I asked him if I could shoot a photo and he said, “You know what, I normally don’t like anyone—but there’s something about you. Let me sit here, and you can get a shot.” Then I went back to my friends and they were like, “Oh my god, we always see that guy but nobody ever messes with him or talks to him.” When they saw that I was shooting a photo they were like, “How the hell did you get that shot?!” 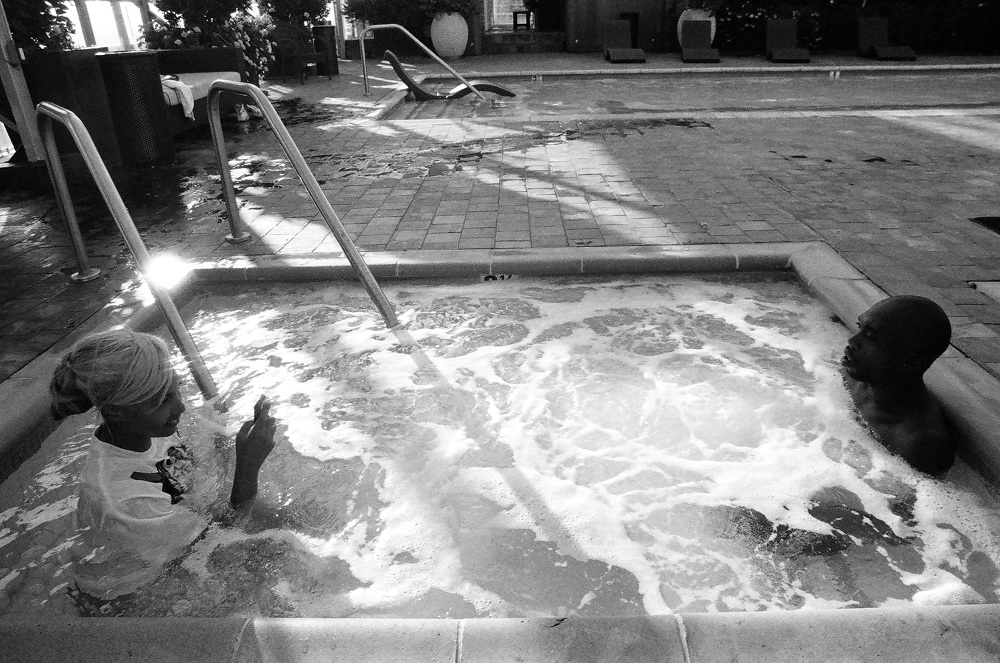 I’ve known Stevie for a while, he used to come to Barcelona. When I used to bartend, he’d come to my bar. He was actually one of the first ones pushing me—saying, “Hey Andrea, if you ever want to come to the States—I can help you.” When I moved here, I was living downtown at first. His apartment on Wilshire was really close, so one day he invited me over. I went over and he was there with a few people, including these girls. We went up on the roof and they got in the jacuzzi, and I had my camera—so I just shot the photo. 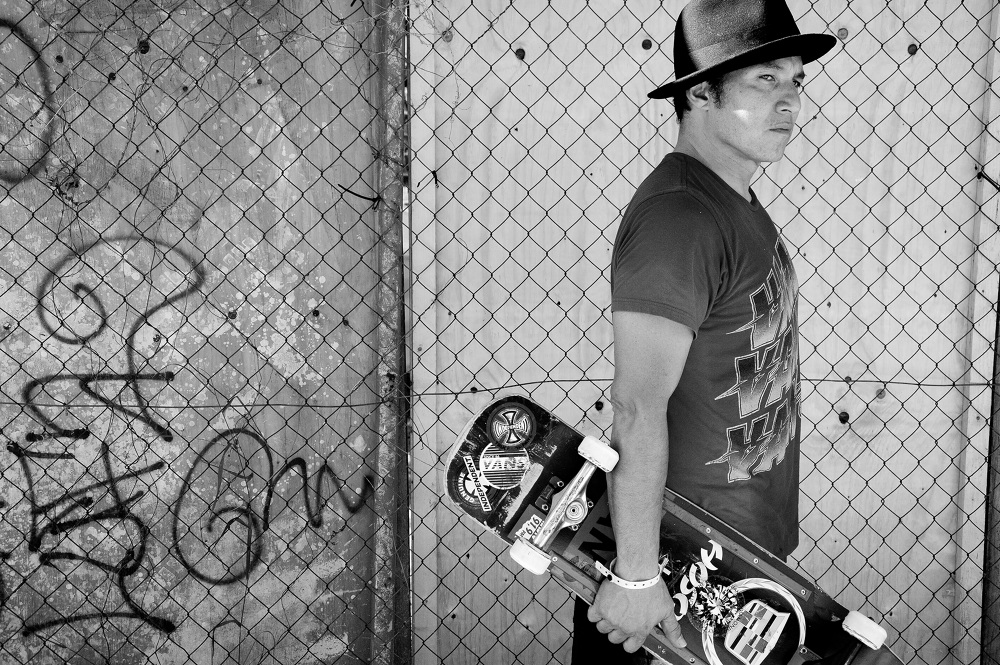 This was when I was at the Mystic Cup in Prague. They did a bowl contest with all of the legends. Christian actually won that contest. It was really cool because you got to see a bunch of the old school guys still ripping. Prague is really small, and a lot of my friends were there—like Greyson Fletcher was at the contest too, and he skates for RVCA. I always had a lot of admiration for Christian. I talked to Greyson, and he told me to just come and talk to him and ask if I could get the shot that I’ve been wanting for a long time. I talked to him, and he kind of remembered me from other contests that I shot where he was skating. We talked for about a half an hour—just sharing ideas and stuff. At some point, I asked him if I could get a portrait and he asked me where. I saw that spot, and I told him to stand there and look away from the camera—and that I wanted the board kind of showing. I got maybe four photos, and one was this one—and I was just really happy with it. Through the Viewfinder :: Behind Patrick O'Dell's 12 Favorite Photos

Leland Ware
"Epicly Later'd" creator and photographer Patrick O'Dell shares some of his favorite skate photos that he's personally shot over the years and the surprising stories behind them. Andres Tardio
"I watched this guy literally run past me. I didn’t know the police had formed a line behind them to box him in. So, he ran down and I manually focused. As soon as he ran down the frame, I just sna...
HIDE COMMENTS