Deep Cover (1992) is one of my all time cop favorites to come out of the crime-fixated late-’80s film noir Hollywood. While New York focused on the decadence of the crack epidemic through the classic New Jack City (1991) that came out a year before (used by Giuliani), Los Angeles-centric Deep Cover released in ’92 focused on the flip side of the coin: A cop combats the city’s drug trafficking and splayed out temptations of man through the eyes of Laurence Fishburne’s character. Couple that with the transformation ill-gotten riches will take you through via the lawyer played by Jeff Goldblum (chaos homie from Jurassic Park).

It had the depth that Colors (1988) lacked, or maybe I’m just a young Sean Penn hater – though I do got love for Tom Hagen.

What most people raved about besides the movie, though, was its soundtrack – specifically the title track by Dr. Dre and a relatively unknown artist by the name of Snoop Doggy Dogg. Rapping about killing dirty cops at the time was very controversial – as Ice T could tell you – but the way Snoop Eastwood told that story was just so smooth. The horns and the P-funk-esque bassline set a chill down the spine. This was the start of the Long Beach take over. 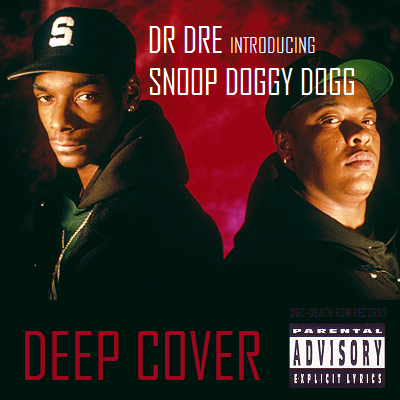 Long Beach is the biggest city in America without its own county. Can you believe that? Of course, not every city of 500,000 shares one of the biggest ports in the world within a financial titan like Los Angeles. While there’s always that stigma of being viewed as the little brother of neighboring LA, a quick look would reveal how grossly underestimated the collective input of the beach city has had on the musical makeup of Southern California.

War was founded and recorded here. The ska revival that many attribute to Orange County cut its teeth in the backyard party scene of Long Beach. But it is in the West Coast Hip-Hop sound that the influence of Long Beach is most prevalent and visible.

Three young men who met at Long Beach Polytechnic High School would later change the hip-hop world. And bring their friends along for the ride because as they say it ain’t no fun if the homie can’t have none. 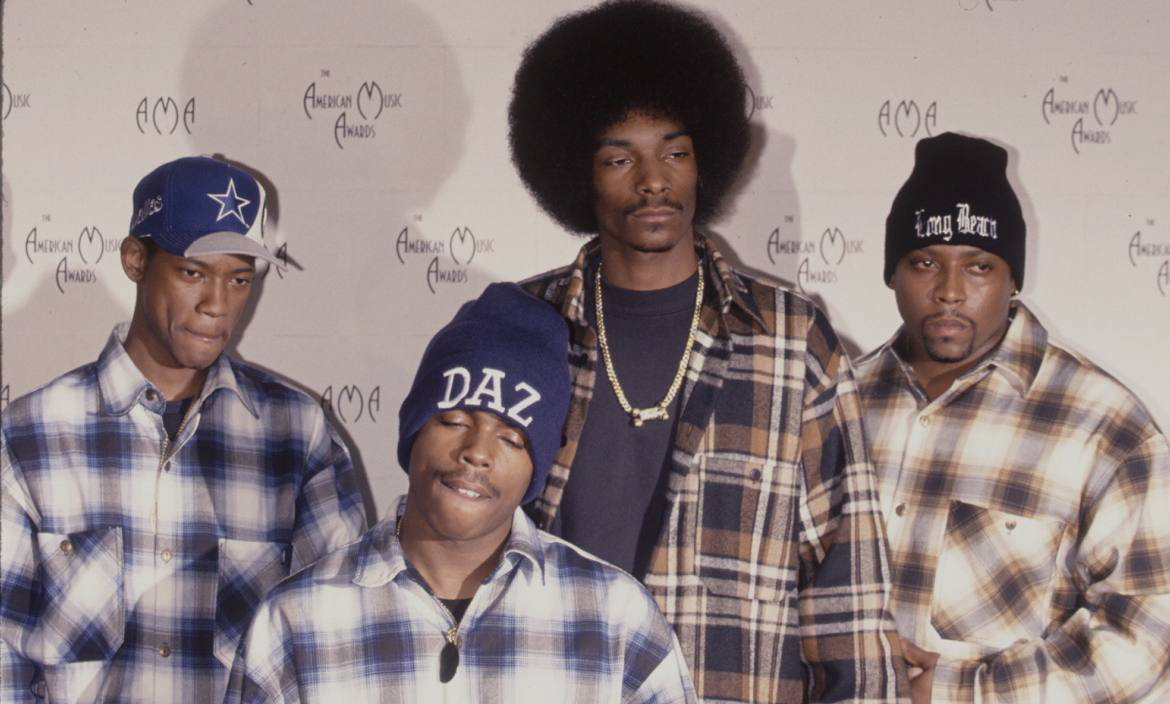 Snoop Dogg, Warren G, and Nate Dogg, who formed the group 213 – while very talented – were lucky enough to be connected to one of the hottest producers in hip-hop: Warren’s older brother Dr. Dre. Nepotism works wonders at times.

Fresh out of the Ruthless Records camp after financial disputes with Jerry Heller and Eazy-E that former partner Ice Cube prophesied about a few years before, (on “No Vaseline“) Dre was forming a new label called Deathrow Records with partner Suge Knight. This became the magnet for Long Beach artists.

While The Chronic became known as the centerpiece for what was to be labeled by music critics as the G-Funk sound that Dr. Dre would become famous for (although Above the Law would say otherwise), many in the local scene would call it what it really was: The rise of the Long Beach sound. MCs from Long Beach showcase on every single track of the album that would eventually be their launching ground on the new “LA” label – from the ubiquitous summer jam “Nuthin But a G Thang” to even the quintessential early ’90s ode to misogyny “Bitches Ain’t Shit.”

Young people and survivors of Reaganomics gravitated towards this new hyper-masculine street realism being displayed in tracks like “Lil’ Ghetto Boy,” as well as “Deeez Nuuuts.” Rappers like RBX, Snoop Dogg, Tha Dogg Pound, and Nate Dogg served as the meat and potatoes of The Chronic. And it sold wonderfully. Over 10 million records to be exact. How you like them apples Jerry? 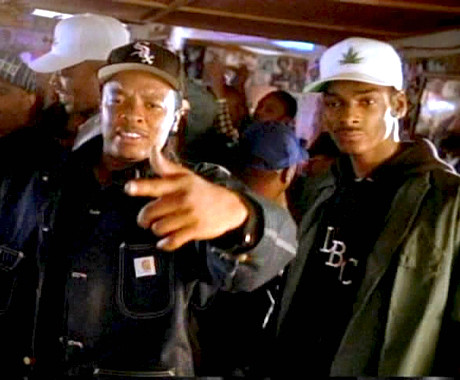 Having worked so hard in making The Chronic the classic that it was in ’92, Snoop and Dre teamed up and reworked the dynamics and space boogie range of George Clinton into the gritty basslines and hard-thumping synthesizers that the new G-funk sound had become known for.

When you’re the first in your city to blow up, you have to come correct. And what better way to do that then “What’s My Name“? The joint that played everyday on KDAY thanks to Julio G and showed Snoop rapping on top of local favorite VIP Records, a popular icon in the black community in Long Beach – the place where he and many of his now-famous friends cut their demos set a definite mark for the city.

From the depths of the seas back to the block, the honey molasses-soaked voice of Calvin Broadus enraptured fans from all over the world and finally separated the sleepy port town from being lumped together with the talent coming out of the more popularly-known Compton.

A quick look at the liner notes gives production credit to Dr. Dre, although it is mostly alleged that the album was almost completely ghost-produced by Warren G and Snoop’s cousin Dat Nigga Daz (later shortened to just Daz, a member of Snoops crew Tha Dogg Pound).

This set the stage now for major labels to send out their scouts, scrambling through the streets of the beach city to snatch up the next best thing. Former Def Jam chairman Lyor Cohen (and Dame Dash’s close friend) loves to tell the story of how on his first visit to the Long Beach home of young rapper Warren G, he found on the turntables a Michael McDonald record and knew he was going to sign the young man to the East Coast stalwart.

From that record came the brilliant sampling of “I Keep Forgettin’,” which was transformed into the West Coast classic “Regulate,” the story of a carjacking in Long Beach.

Riding off the success of “Regulate” and “This DJ,” he released his first record Regulate… G-Funk Era in 1994, which debuted at #1 on Billboard and ended up selling over 3 million copies. The album showcased local acts that would soon make a name for themselves, such as the The Dove Shack with their summer ode to the city “Summertime in the LBC“, and The Twinz who had a local hit on KDAY with “Eastside LB.”

Suge capitalized on the productivity of these young hungry MCs from the city and quickly released Tha Dogg Pound’s Dogg Food the following year in ’95, highlighting the feud between Eazy-E’s Ruthless Records and Death Row, as well as the swagger jackers in the industry (we lookin’ at you, Jermaine Dupri) with the funk-laced single “What Would You Do.”

Tha Dogg Pound, consisting of Kurupt and Daz, were definitely viewed as the hardest group to come out of the later Death Row years, and with Dogg Food, they set out to prove it. The haunting keys of Daz mixed with the raw lyrics of Kurupt proved to be one of the best combination plates to come out of Louis Burgers.

In a hip-hop world polarized between East and West, Tha Dogg Pound poured a gasoline canister on that fire with their hard-hitting epic “New York, New York” (produced by DJ Pooh better known as “my mama gave me that chain” from Friday). Featuring a video which found them on location in the city, knocking down the landmarks of the Big Apple Godzilla-style, Kurupt lyrically massacres and calls out all East Coast opponents. The film trailer was even shot up during production of this video.

“Let’s Play House” with Nate Dogg and Miche’le is an underrated cut. “I Don’t Like to Dream about Getting Paid” tells the story of a ex-con trying to maintain in a world where opportunities are limited. And it wouldn’t be a real DPG record without some raunchiness exhibited through “Some Bomb Azz Pussy” (the legendary Tha Dogg Pound tour in Japan is still talked about to this day).

Their fiery temper proved to music critics that – though mired in controversy – the Death Row label could still depend on its Long Beach artists to sell a few million records. It would be one of the last G-Funk records to be released.

The shareholders protests that led to Time Warner divesting from their hip-hop investments – as well as the violent controversy of the East vs. West Coast war perpetuated by white media and the respectability politics of black social figures – (C. Delores Tucker) led to the decline of the G-funk genre and the Long Beach City that raised it to fame. Nate Dogg’s album release was delayed with the imprisonment of Suge Knight. Dre left death row to found a new label Aftermath. Snoop released The Doggfather before leaving to become a member of New Orleans legendary No Limit Top Dogg. It was the end of an era. 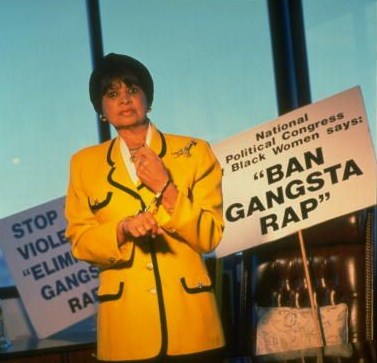 But for a brief period in time when people said “The West Coast,” what they really were talking about was Long Beach. And in the immortal words of our fallen warrior, “Nobody Does It Better” than the LBC. Justin Davis
Before Death Row Records, the world had only felt a small dose of what the West Coast was capable of. Justin Davis discusses the top 6 ways Death Row changed the game and taught us lessons about th... Senay Kenfe
Senay sits down with Kurupt for a look into the storied history of one of hip-hop's most talented and humble emcees to every play in the game. Here, he shares what he learned from the greats, and h...
HIDE COMMENTS