Notes for a Theory of Booty :: 10 Artists to Watch at Superchief's "Booty Worship" Show

Booty Worship, a group show with a whopping 90 artists, is opening at LA’s Superchief Gallery on May 2nd. The show got me thinking about booty – the word that has seemed to explode in popular culture over the last few years. What does this new “booty worship” mean for women? Does it mean that your ass has become the latest marketing technique to sell the sexualized female body? Big booties are no longer relegated to rap songs and their culture – it is the new way to sell an image, to commodify a body. Is capitalism’s warm embrace of our booty empowering to othered body types and cultures? Nicki Minaj, Iggy Azalea, etc. certainly used it to their advantage. It seemed like every pop song in 2014 referenced booty. I can’t blame any woman for using her body to take command. Maybe a woman still needs to be viewed as a sex object to get ahead in this world, but is the power of our bodies to produce sexualized images the kind of power we want? Can the ass symbolize a more powerful and all-embracing sexuality? Feminism has often been called a privileged white woman’s club – does the rise of the booty change this, or does it just further disempower the women we stole booty culture from?

Anyway, booty politics aside, Booty Worship does celebrate the female body in a positive, if not rigorously thoughtful way. The large number of female artists included in the show makes me think that the booty illustration offered at Superchief isn’t just a more-relevant embodiment of the classical female nude. These images are created for a female viewer just as much as for a male, and at its best, the show puts the female body in a rightful place of power. Maybe the big juicy ass of the future hasn’t yet shoved aside the old tired phallus of the past, but the young artists featured at Superchief are reimagining our media and its stereotypes to celebrate girl culture, youth, and all of our bodies.

And if you want to literally celebrate the booty, check out the show’s opening on Saturday, May 2nd from 6pm-midnight at Superchief Gallery LA, 739 Kohler St., Los Angeles, CA 90021.

Goodbag’s work for the show is one of my favorites. Amazingly skilled at embroidery and imagery. It’s a clear and well-executed reference to the construction of the sexualized female body. 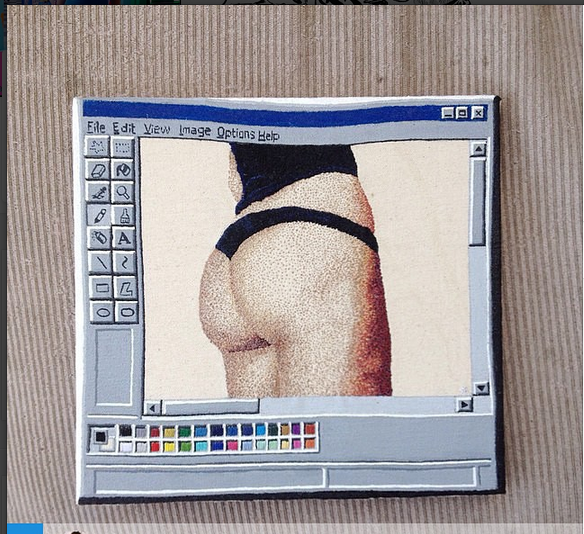 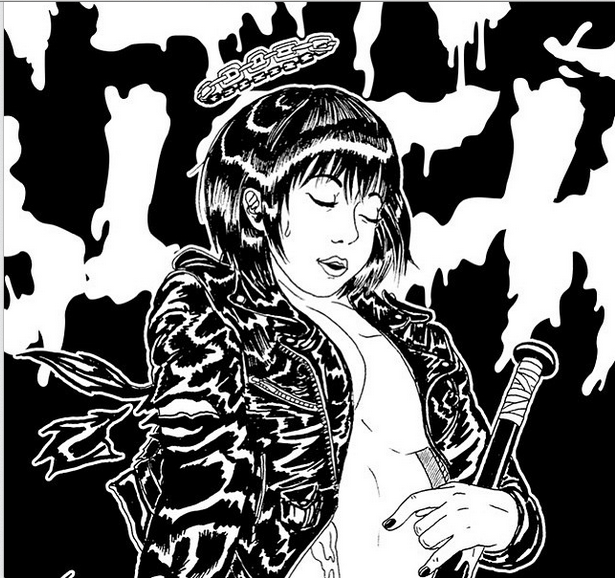 Manga-inspired figures populate his surreal illustrations of daily life on the street. The subject matter of crimes, fights and 1980s hotties creates an interesting clash with his stylized maximalist drawing style. 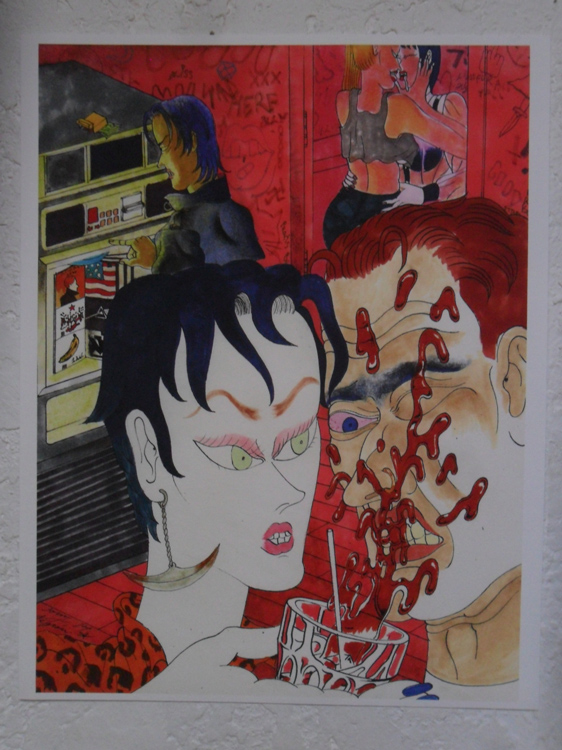 Hyper-hyper detailed sketches of girls and their objects. My favorite is her series of graphite portraits. She features injured girls with off-putting childlike beauty in staged glamour poses. They remind me of the pain of girlhood and performing glamour and captivating with the strange beauty sad girls seem to have. 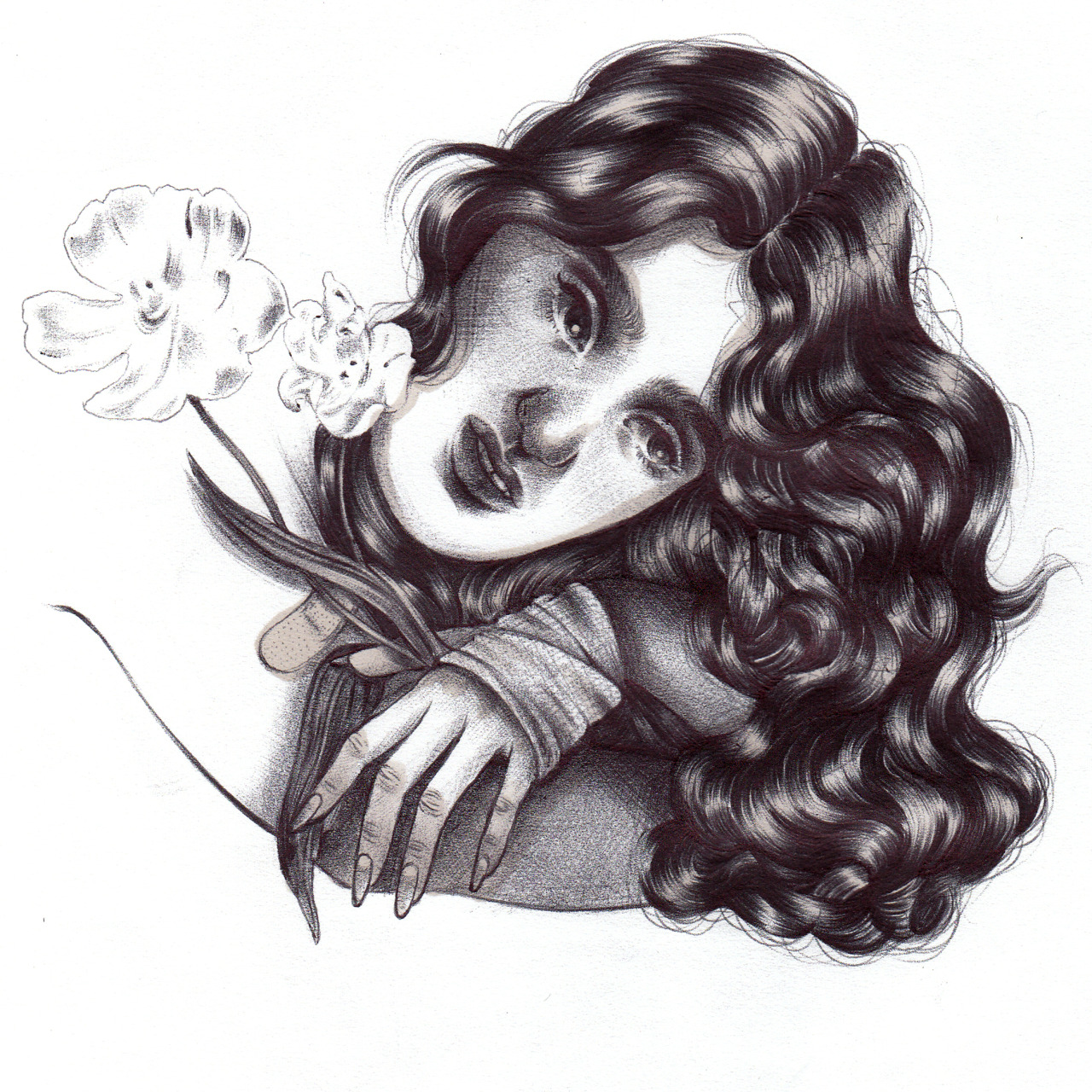 Mcginnis specializes in drawings and paintings of queer cartooned bodies in bright 70s kinda way. I love his super graphic take on the body and his perverted interpretations of beloved icons. 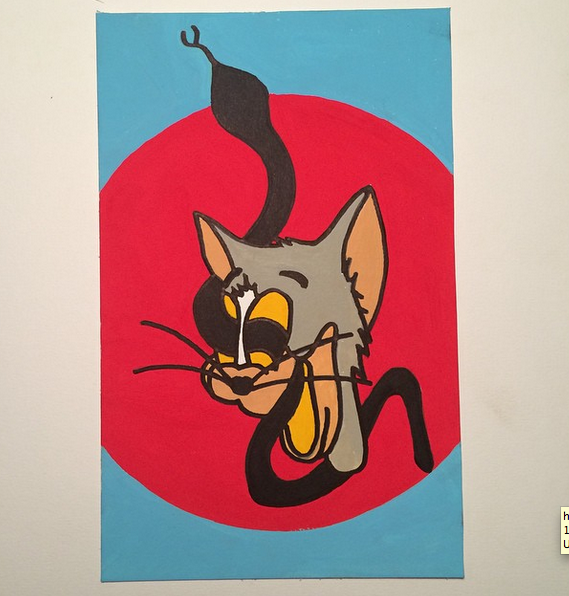 More beautiful embroidery from a female artist. Varrone draws from all sorts of sources including muppet’s fetish (?) art history (the image bellow is taken from a Diane Arbus photo), and beach bums. 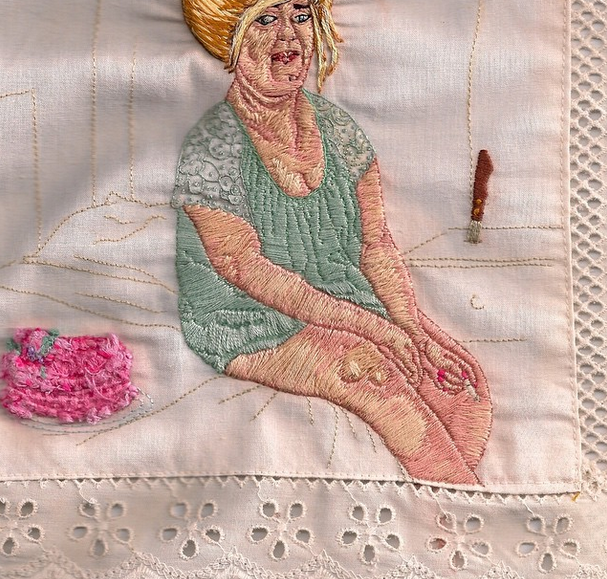 An illustrator and artist, specializing in hand drawn-type artworks. Hill’s work is very very different from the other artists featured here but I appreciate her weird super graphic take on ’80s design (and maybe some variation goes a long way). 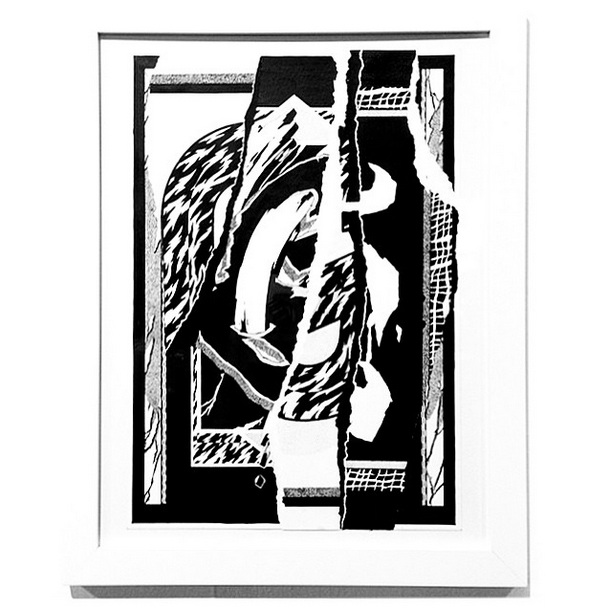 Cañero makes grotesque portraits of hot girls and weird ass, with still lives of disembodied butts. Her work addresses the contemporary life of super sassy girls. I love her sense of humor and her asses are pretty sweet and juicy too… 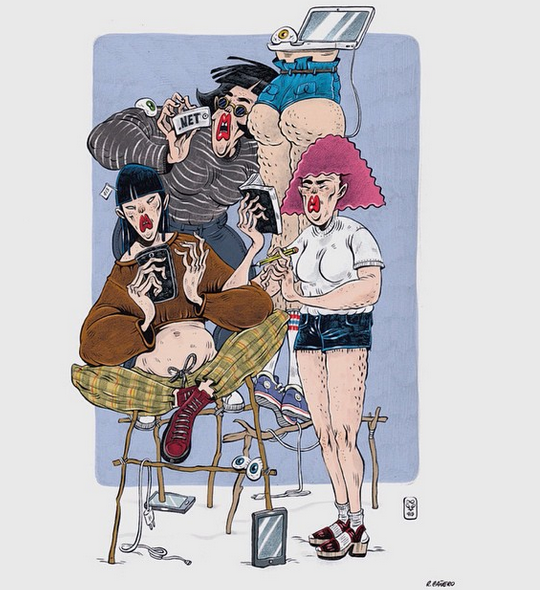 Thank god for the return of embroidery in contemporary art. Thompson takes what was once a craft used to keep women and their creativity in check and turns it on its head as a hyper-sexualized new way to show tattoo-style illustration. 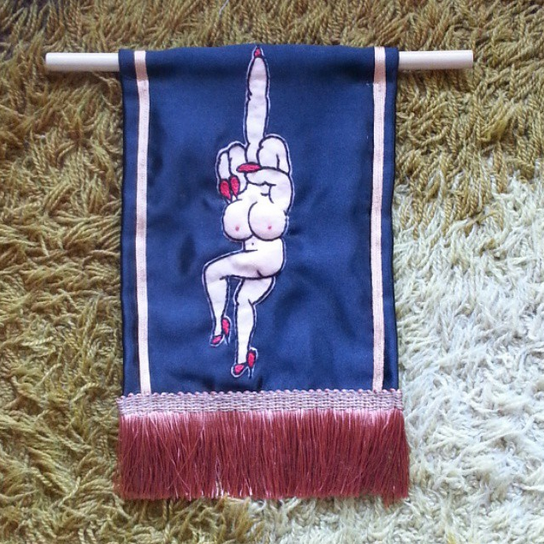 The Instagram of this bicoastal gallery is pretty great to follow. They frequently post lots of work from the many artists they show, giving you a piece of the gallery on your phone when you can’t make it to the physical location. Booty Worship is only one of many awesome group shows that you can find at Superchief’s Downtown L.A. and Brooklyn spaces. 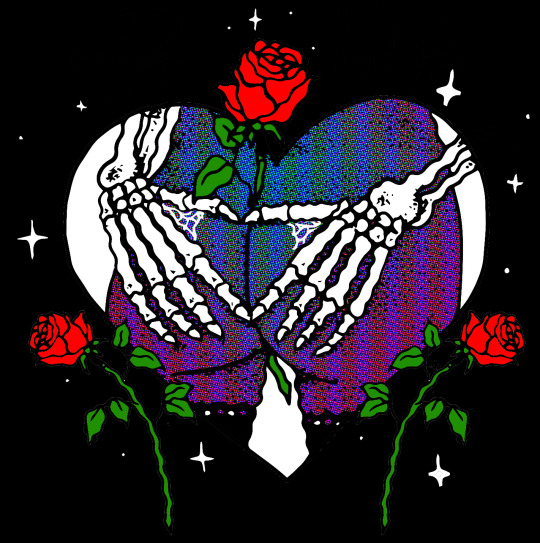 The show will be up from May 2-30.
The gallery is open Thursday, Friday and Saturday from 12PM-5PM or by appointment – Info@Superchiefgallery.com. Body Anxiety :: An Online Exhibition and a New Voice for the Selfie

Katie Rosenthal
Katie explores the online exhibition "Body Anxiety," curated by Leah Schrager and Jennifer Chan, and focusing on the female body as it exists online, and explains why the Internet is still a "battl... Katie Rosenthal
Katie visits Karl Haendel's UNWINDING UNBOXING, UNBENDING UNCOCKING at Night Gallery and describeds how Haendel "captures the strange idea of buying who you are." Only in L.A. :: When Juicing Meets Contemporary Art

Katie Rosenthal
Katie visited Michael Parker’s "Juicework" show expecting ceramics, but was instead confronted with a room of people making juice – and a surprising takeaway on collective labor.
HIDE COMMENTS