Do you still have no idea who or what the hell the Suicide Squad is but are too ashamed to ask? We got you. Zach Norris has compiled a mini-bio of every anti-hero you need to know to get through this DC Comic Universe film with your dignity intact:

After mixed reactions to leaked photos and cell phone footage, the Suicide Squad trailer hit the web and had the internet going more nuts than Paul Wall could ever hope to. Margot Robbie looks great as Harley Quinn! There’s a shiny purple Lamborghini with Batman on the roof! Will Smith! Jared Leto’s Joker! There’s so much craziness going on that it’s easy to forget that the Suicide Squad is a lesser known title from the DC Universe. It’s seen many iterations and it’s had various characters shuffled in and out over the years. We decided it might help if we dropped a bit of background info about the characters that are showing up in the film. Some of these characters have been mainstays in the Suicide Squad since its inception, while others are new to the squad for the film. A handful of them I was familiar with through their involvement with Batman (Joker, Quinn, Deadshot, Killer Croc). Outside of those guys, I had to dive into the DC Comics Wiki to learn about the characters I wasn’t in the loop about. Here’s my honest attempt to scrounge up mini-bios about each character – where they’re from, what they’re about, and what role they may play in the film. 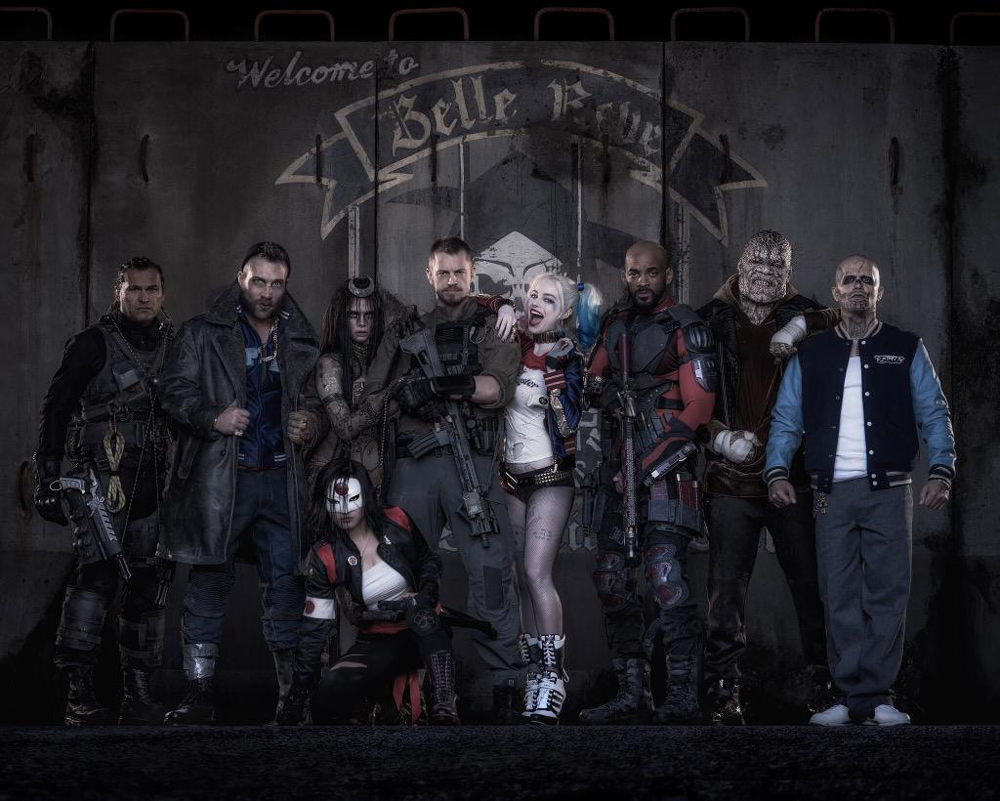 Dr. Harleen Quinzel had barely begun her career as a young psychiatrist at Arkham Asylum when she became infatuated and obsessed with The Joker – at least, that’s one origin story. Another has it that The Joker manipulated and brainwashed her into being his partner in crime. We don’t know how the film will spin it, but either way, Harley Quinn has become one of the most popular female characters in comics (even though she was initially introduced in Batman : The Animated Series). She’s beautiful, good with guns, a skilled gymnast, more intelligent than she lets on (she’s a doctor), and will do whatever it takes to make Joker happy. That alone makes her one of the deadliest members of the Squad.

Floyd Lawton aka Deadshot
Played by Will Smith

In the DC universe, Deadshot is a mercenary who is regarded as the world’s deadliest marksman. He uses his otherworldly firearms skills to aid the Suicide Squad in whatever deadly way he can. His backstory is a tragic one. When he was young, he accidentally killed his brother trying to protect him from their abusive father, a traumatic experience that resulted in Deadshot having a disregard for human life – including his own. As an assassin, he is the consummate professional. If he’s being paid to kill, he kills. With Will Smith (almost everybody’s favorite actor) portraying the character, I find it hard to believe he’ll play the unyielding hitman, but I’m interested to see how they’ll mold his personality.

Waylon Jones aka Killer Croc, has one of the most heartbreaking and hardcore origin stories of all Batman’s bad guys. Bear with me though, it gets a little deep in the Sci-Fi here… Waylon was born with a specific form of atavism (look it up) – a weird biology thing where your DNA has really old genes in it. Croc’s atavism appears to have a link to reptiles, which accounts for his appearance, abilities and partly for his actions. He’s part human, part crocodile. You’re wondering where the heartbreaking part is. Check it. As a child, Waylon was raised by his aunt. She verbally and physically abused him because of his appearance. One day, he got tired of it and ate her. Pulls at your heartstrings right? Who knows if we’ll get that from the movie, but I’m already slightly disappointed in his size. I dig the decision to use makeup instead of CGI/VFX, but Croc looks a bit smaller than he’s usually portrayed. Besides that, he looks pretty badass. Here’s to hoping we get to see him eat someone!

Adding a bit of a supernatural element to the squad, Enchantress is a sorceress. She gains her power when her soul is bonded to an evil entity who sometimes takes over her body and powers. She’s later stripped of the evil force, but her powers remain. She can control magical energy, which allows her special abilities like healing and teleportation. She can control non-living objects via telekinesis and can also walk through walls. We’ll see if the movie deals with her double identity issue, but even if they don’t, Enchantress is sure to be a force to be reckoned with. She’s definitely one of the better looking members of the squad, being brought to life by Cara Delevingne doesn’t hurt.

El Diablo is a guy with a tortured past who’s taken off death row and forced to work for the Suicide Squad. When the squad enlists him, he’s waiting to be executed for burning down the house of rival gang members. Unbeknownst to him, there were innocent women and children in the home. His power comes in the form of pyrokinesis, the ability to create and control fire. There’s not much of him in the trailer, but it does look like his character design is a ripoff of Rick Genest’s tattoos. He does have tattos in the comics, but they’re not as skeletal as the movie version appears. I hope Zombie Boy is getting paid.

To be 100% honest, this guy sounds boring. Military training and peak physical conditioning are what sets this guy apart from the rest… The rest of what? America? Rick Flag is an expert in military tactics, strategy, demolitions and combat. He sounds like a leader type, but he also sounds “normal” – which most of the squad is not. He probably does crossfit and reads Tom Clancy novels when he’s not playing anti-hero lackey for the government.

Tatsu Yamashiro, or Katana, was just a normal girl who liked martial arts who showed a particular proficiency with swords. After killing the man who murdered her husband, she discovers that her husband’s soul had become bonded to the mystical sword he had been slain with. The sword grants her enhanced power and allows her limited communication with her dearly departed. Couple the magic sword with some new training and she’s now a powerful, sword-wielding, badass samurai. I back it.

As his name would have you lead you to believe, Slipknot is a guy who is good with ropes. So good in fact, he creates his own special ropes and uses them in various ways to do various bad things. Unless he’s working for the Suicide Squad which then makes his bad things kind of good, or at least, bad things done for what may be a good reason. Slipknot formerly worked for a chemical company, which is where he developed his durable ropes. He’s also had training as an assassin. I wish I knew more ways to make this guy sound like a badass, but I’m at a loss. I’m sure he can handle his own, but a huge part of me wonders how this guys is taken seriously when he’s up against say, Wonder Woman, who has her own badass rope. I guess we’ll see.

??? aka The Joker
Played by Jared Leto

I don’t think I need to give any backstory here, but even if I wanted to, I couldn’t. To some, including The Joker himself, he doesn’t have a concrete history. His thoughts on the subject : “Sometimes I remember it one way, sometimes another… If I’m going to have a past I prefer it to be multiple choice!” Though his origin has been reinterpreted countless times, the commonly accepted one is that of Alan Moore’s infamous 1988 graphic novel, The Killing Joke, which follows a failing comedian who agrees to help gangsters break into a chemical plant in promise of enough money to support his pregnant wife. The criminals force him to dawn a red mask and call himself The Red Hood. During the heist, Batman accidentally knocks him into a vat of chemicals, forever disfiguring him and creating our beloved super villain. Again, that’s just one way his past has been told.

We love him ‘cos he can’t be figured out. He’s evil, cruel, sadistic and murderous purely for the sake of being those things. Heath Ledger famously and brilliantly delivered the most powerful performance of the character on the big screen (props and respect to Jack, but Ledger BECAME The Joker). Now it’s Jared Leto’s turn to show us another version. I’m not a fan of his appearance – the tattoos and silver teeth are lame – but I have faith in Jared Leto to pull off the next level craziness of The Clown Prince. (*Semi-Spoiler Alert*) My odds are that Joker is the main bad guy in the film, and that the squad is assembled to stop him. That’s just my speculation though. Only time will tell and we have quite a bit of that before the movie drops.

From Hip-Hop to Comics :: The Art of Making "DMC"
HIDE COMMENTS