From this very quote, I instantly fell in love with YouTube star and cuisinière Auntie Fee, and started to watch compulsively each new episode of her no holds barred YouTube cooking show back in 2014.

Filmed by her son Tavis, it struck a chord with me because here was a chance to immerse in a world of pure freedom, away from the snobs of haute cuisine, where the absence of crescent roll could simply be swapped for “any cheap-ass doughnut, whatever, it don’t matter,” according to Fee. Whether she was cooking “something sweet for the fucking kids” that she had “no motherfucking name for, shit,” or drowning a gang of shrimp into an ocean of budget frying oil, Auntie Fee’s cooking was always point-blank, spot-on. Unapologetic comfort food.

“Was,” because the great Felicia O’Dell just passed away on Sunday, at 59. 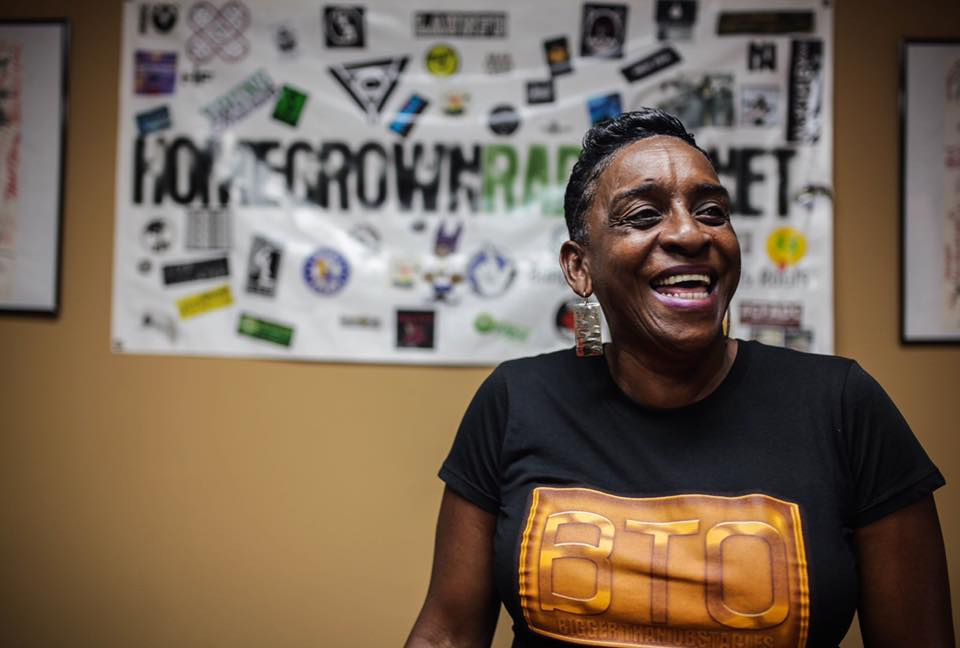 Just last week, she had dropped the funniest Facebook video, where she was getting her Escalade back from the pond, willing to drive away in it... only to realize that whoever stole it had removed the motor and transistor. With her so fresh in my mind, the news of her death just can’t register.

But anyway, back to 2014: when Auntie Fee, also known as Chef Sista Girl, surfaced to give a purpose to my culinary life, I knew I had to interview her for my blog at The Hundreds—after all, Auntie Fee was melangé-ing the two things any French honest homme like me is fascinated with: food making with a dash of down home hood truths for extra crunch.

How was I gonna get in contact with her though? With my LA street smarts was limited to bare bones basics (I might have forgotten to pay at In-N-Out once), my connections with South Central were as thin as my chances to survive after inhaling—as did a guest in the “Auntie Fee and hers desert with Daym Drops” episode—34 shrimps, 4 pieces of Sizzler’s toast, and 4 Kool-Aids.

However, on a bright day of December a few years ago, the Gods decided to smile upon me: in a quickly deleted public Facebook post, a family member declared that Auntie Fee was having a New Years’ Eve party at her home, that she was going to cook, and that everyone was invited, and, well, “here’s the address.” Promptly screen-shooting the gaffe for I knew the unbelievable moment was to disappear as fast as it appeared, I kept the address, just in case I’d innocently be driving through the South Central area of Los Angeles some day.

The occasion occurred a few months later. Wrapping up an interview with avant-garde jazz/reggae legend Jamaiel Shabaka for Wax Poetics, I realized that the location I had so preciously tucked away in my phone was only a sweet ten minutes drive away. Let me go check...

By the time I reached, LA traffic et al, it was pitch black. I parked on the side of the house, not sure if I really should ring the bell. Was that even the actual Auntie Fee lair? Thankfully, a blinding ray of light pouring from a window helped me. Three giant light stands inside the kitchen couldn’t lie: something was being filmed in there. As I made my way towards the window in question, the light went off and I heard “cut, cut, cut!” 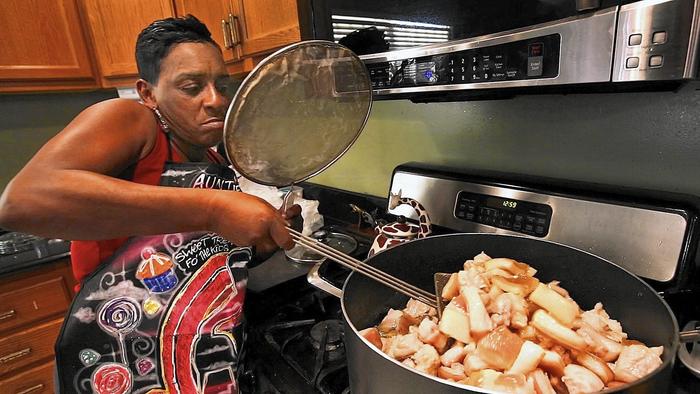 And then I saw her.

Backlit and glistening in the last photons of what I came to find out was an LA Times video feature, she had the allure of a sacred icon. Auntie Fee. In her kitchen. I timidly asked from the street and with a fence between us: “Excuse me? Excuse me? Are you Auntie Fee?” As if handed by the Holy Spirit in person, a reply was mused from inside. It exceeded my wildest dreams:

“Who the fuck are you, white boy?”

Score! “I am a French journalist willing to interview you for The Hundreds!” I replied. The look on her face at the time was one I will never forget.

“What the... come to the back!” she shouted after a few seconds. To anger succeeded curiosity now: as she came out of the back porch, a few nephews, son, and sisters gathered around me. Here was my time to effectively explain who the flump this white boy was. And, incidentally, what the hell this he was doing here, etc. Or, to put it in abrupt layman terms, what the general fuck.

I virtually cleared my throat as I remember thinking, here’s my chance to either get an interview, or to end up as “dumb good mac and cheese.” In order for the first option to manifest, I knew a lot of explaining was ahead. First and foremost, before even getting to the interview request, two main interrogations surfaced from the anxious crowd—how did I find the address? And was I by any means, err, a disguised representative of the law enforcement services?

After five minutes of syntaxic struggle, a stunned silence hit my attentive listeners. What I dearly would prefer to remember as deep attention probably had more to do with the perplexity induced by my sweaty-palmed, Inspecteur Clouseau-style spitfire word delivery.

Easing up into a conversation after the initial awkwardness, I managed to explain what The Hundreds was, and scored big points by showing a post I had just done about Polo boosters of the 1990s. I had done okay.

Still, though, the main question remained. One of the nephews objected: “Are you crazy? You just barge a house in the hood after dark?!” The crowd erupted in laughter, and so did Auntie Fee. It seemed I had won their hearts.

After quickly brushing off the possibility of LA-Times-type compensation (“They just gave her 3 G’s for the interview today!”), the promise of an appointment, free of charge, was made. Next thing you know, Auntie Fee was on the late night show of “What’s his name again, Jimmy Kimmy or some shit?”, became a renowned, and busy, TV star, and I was back to Marseille, France. We never got to meet again.

Before I jumped back into my Volvo wagon (yes, I am that white), Auntie Fee gave me these last words of wisdom, ones that could be useful to any other French bearded man as myself seemingly lost in South Central at night: “I wanna see you walk to your car to make sure you won’t get shot, folks don’t joke around here. But they probably wouldn’t fuck with you, they’ll think you’re a bum or something.”

For this advice, and the rest of these stellar 15 minutes, I just wanted to thank you. Rest in Power, Auntie Fee.