“All of my work carries an underlying theme of duality,” says our friend, LA-based Melbourne artist MEGGS. Duality. Order vs. chaos; mortality vs. immortality; overindulgence vs. decay. As one of the founding members of the legendary Melbourne street art collective Everfresh Crew, David “MEGGS” Hooke comes from a familiar background in skate, graf, heavy metal, and – likely because of his love for good vs. evil dichotomies – comic book art. Similarly, he straddles both the fine art world as well as the street art world, and his current exhibition Spoiled Rotten includes a new body of over 40 new works he made during a 5-week residency in Detroit. Spoiled Rotten is inspired by the spoils of Detroit past and its new revivals – it’s another instance where themes of conflict and co-existence seep into MEGGS’s work. Resourcefully utilizing fallen urban detritus like signage from old billboards and abandoned buildings, MEGGS says, “In Detroit, it feels that where traditional industry has failed, creativity and resourcefulness may grow, building on this loss and decay to its advantage.”

Spoiled Rotten will be shown at Inner State Gallery in Detroit until this Saturday, October 11. “This city continues to spark creativity in me,” he wrote on his blog. In a few weeks, he’ll be back in Detroit to adorn another massive wall with his work. Below, we were able to exchange some words with MEGGS on his latest works, abstraction, decay, and new life. 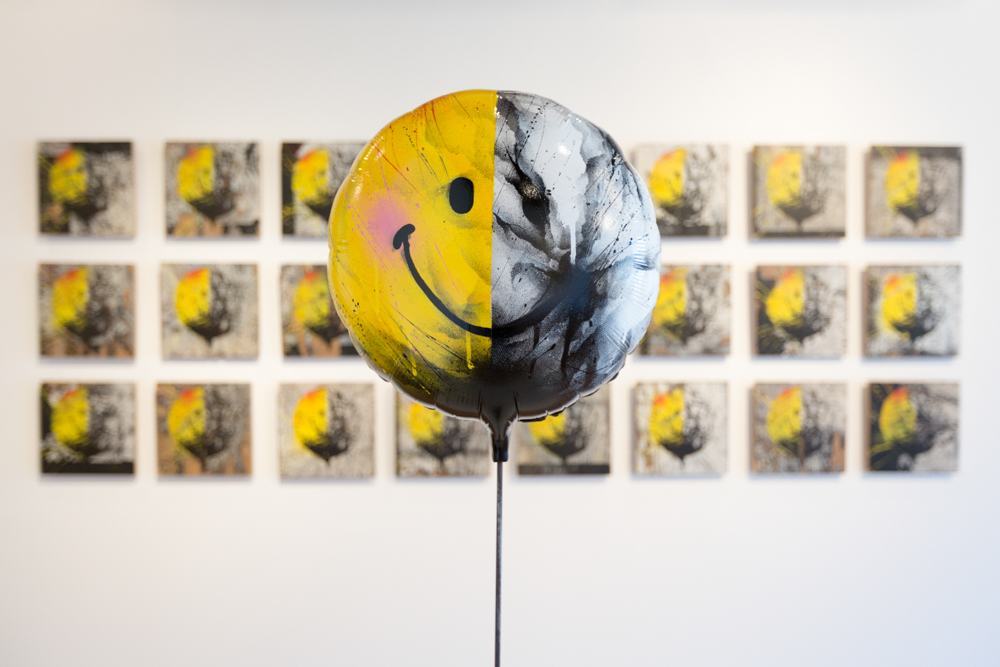 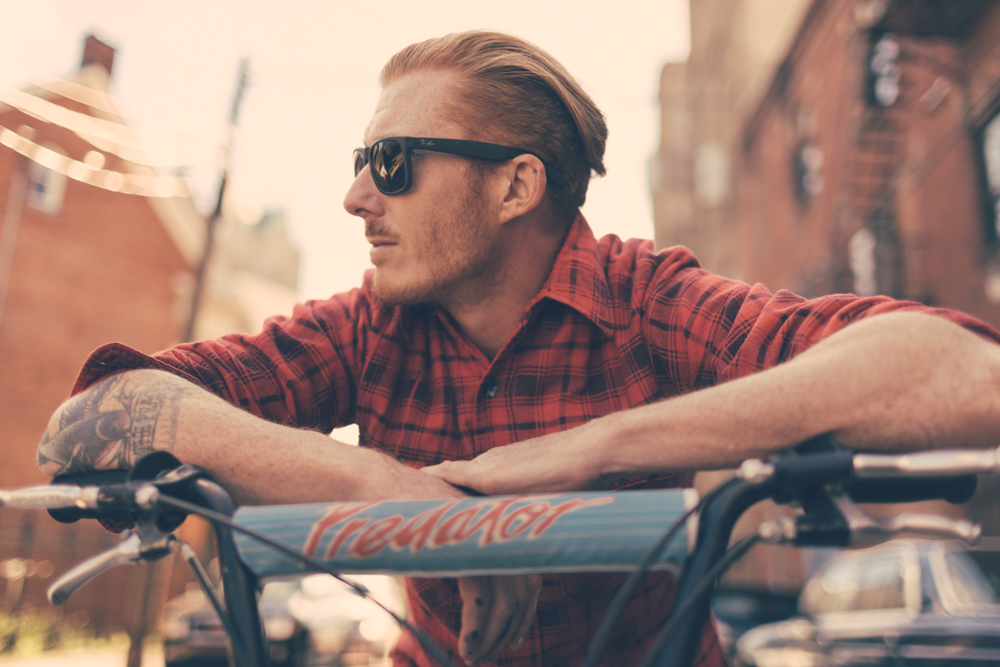 ALINA NGUYEN: Where do you usually find the themes you want to tackle in your work?
MEGGS: All of my work carries an underlying theme of duality, whether it’s good vs. evil, luxury vs. struggle, hero vs. villain, etc. For each exhibition, the specific ideas for theme and body of work can come from various sources depending on what’s inspiring me at that particular time. I am finding more and more that, in both my gallery and mural work, the theme is inspired by the environment and place in which it is being painted and/or shown.

What aspects did you take from Detroit that you put into Spoiled Rotten after spending five weeks there? Tell us more about what you mean when you say “the duality of Detroit.”
The duality of Detroit lies in the extreme gains and losses of the city that was once America’s richest and is now its poorest. Grandiose buildings sit unused next to boarded up houses and empty lots that display the extremes of mass cultural growth and loss in plain sight. Detroit has lived and died through one social extreme to the other, which, for me, makes it the pivotal city of transition from American dream to American nightmare.

Through the ups and downs of profits and losses, culture can survive and evolve to reflect its people and environment. In Detroit, it feels that where traditional industry has failed, creativity and resourcefulness may grow, building on this loss and decay to its advantage. For example, many Detroit artists before me also used discarded materials – an obviously abundant Detroit resource – to create pieces and frame pieces. The content of my paintings and textures were inspired by the urban decay, and the characters reflect both Detroit and classic American pop-culture icons. 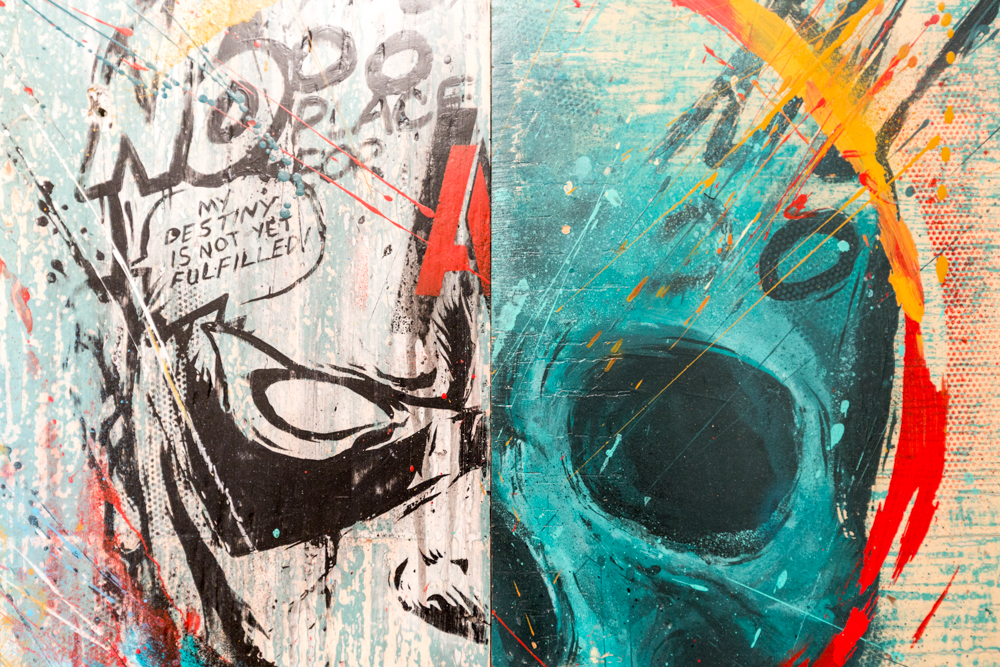 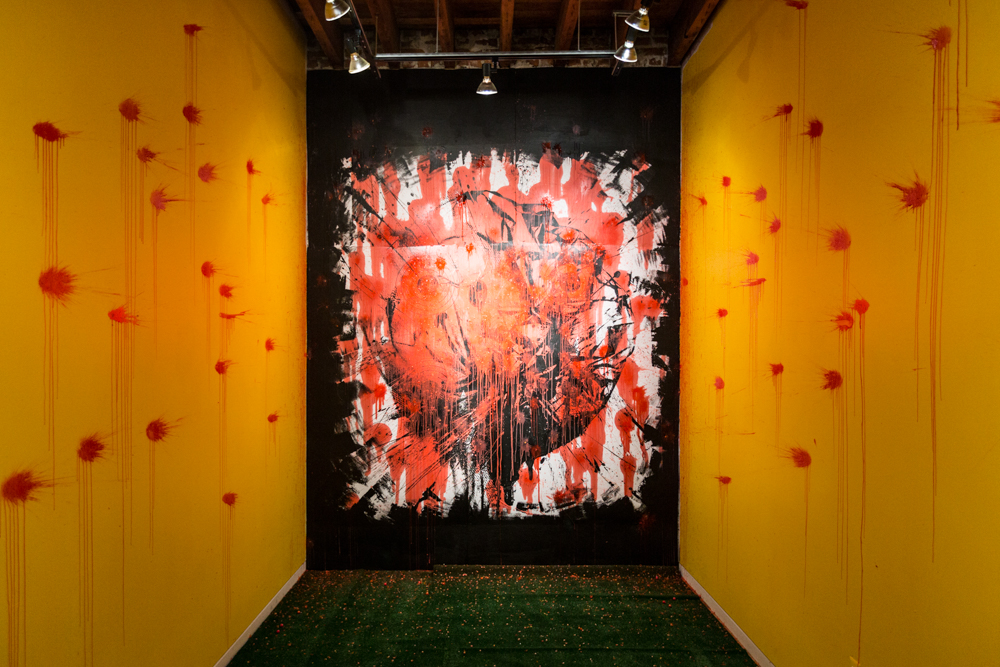 What’s something particularly interesting that happened during your stay?
Having heard a lot about the dangers of the city, the most interesting thing for me was how there are now pockets of creative energy and people making the most of their situation and building something new. It is also a welcoming place and there are tons of enthusiastic, like-minded, and proactive people that come into the city to build on it too.

Do you think you were able to get across more points by having Rafael Batista sculpt your pieces? Did you learn anything from him? What was it like seeing your work sculpted?
Working with Rafael enabled me to bring the hero balloon image from the show into a 3D life form and expand on the artwork. It’s exciting for me to include sculptural and interactive elements into a show, as I think it helps people to connect with the work and makes the gallery a more inviting and involving experience than just pictures on walls. Street art is fundamentally about its environment, so when I create an interior space I want to make it an artwork environment as much as it is an exhibition of artworks. 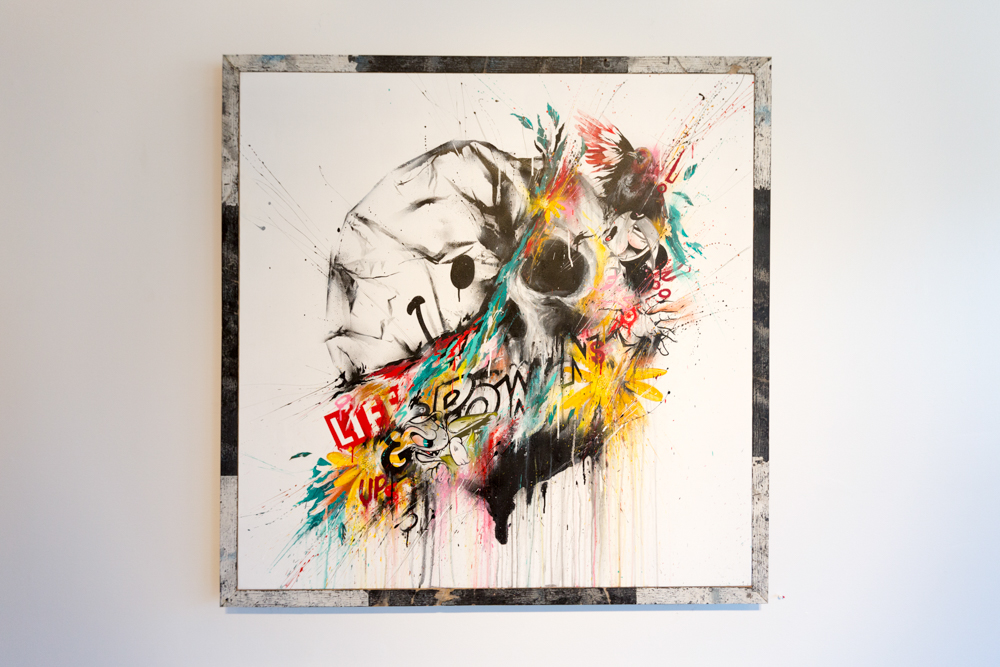 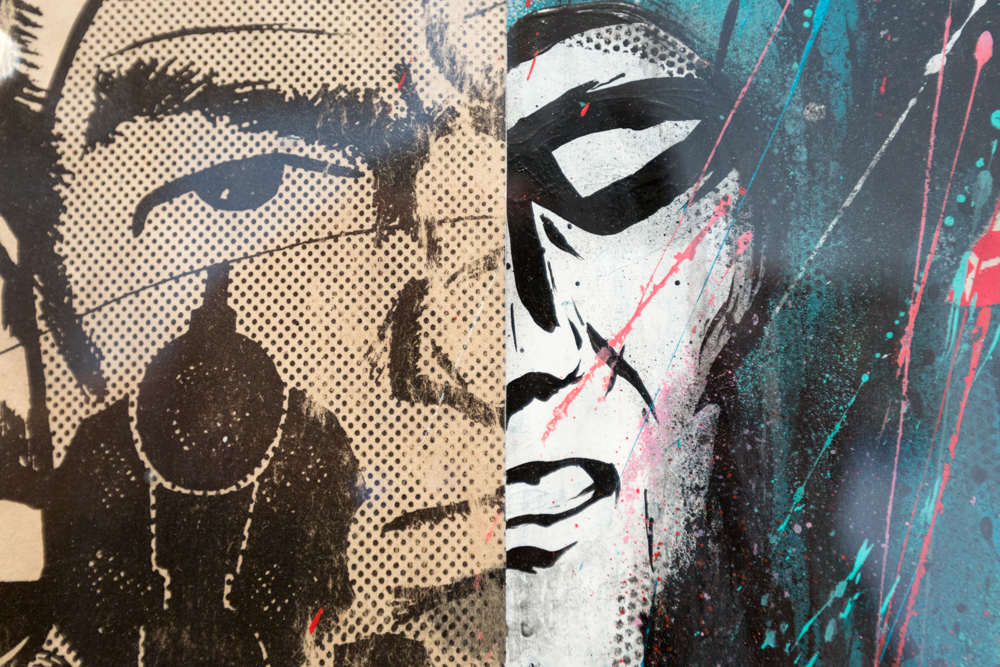 What is it about decay that you’re drawn to?
I love texture and color, storytelling, and captured moments in art. I love abstraction and the unique beauty in the randomness of paint and drips and splatters. Decay in its natural form is a combination of these things. To me, things like rust, drips, cracks, etcetera, are aesthetically beautiful, but essentially reflect the environment and tell the life story of a place and/or object. Forgotten places like abandoned buildings are really fascinating because they reflect a personality of past, present, and future. 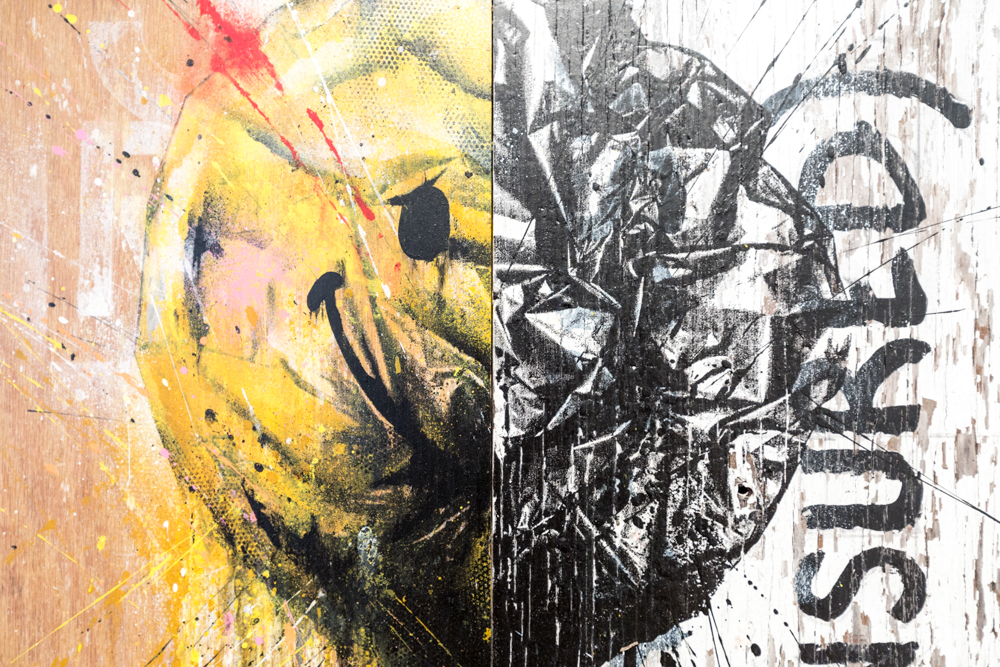 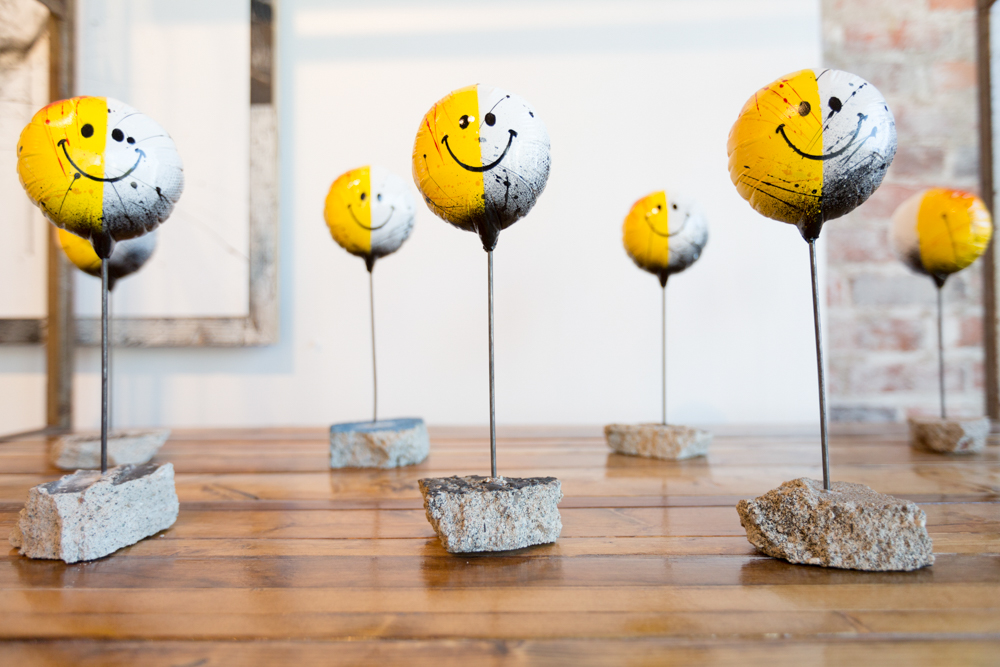 Can you tell us a bit more about how you sourced the signage and materials from dilapidated buildings and billboards? What do these pieces represent to you?
One of Detroit’s most abundant resource, right now, is discarded materials and crumbling structures. I find urban exploration fascinating, so we visited a few abandoned sites around the city just looking for materials and surfaces that inspired me and could be re-built into new surfaces to work with. It’s kind of a double-edged sword in Detroit, as re-using materials is a great way of recycling and telling the city’s story, but scavengers deconstructing structures to reap materials to sell is also a destructive and dangerous element around the city. I believe that finding reusable materials and building new things from them – especially in the form of new art and furniture – is a way of celebrating what’s uniquely Detroit. These are materials that would otherwise end up in a landfill. One of the most interesting depictions of this is Tyree Guyton’s Heidelberg project, which has transformed empty blocks into a sculptural landmark. His art is built entirely out of discarded materials, such as toys and shoes, which highlights the loss and celebrates a community spirit. 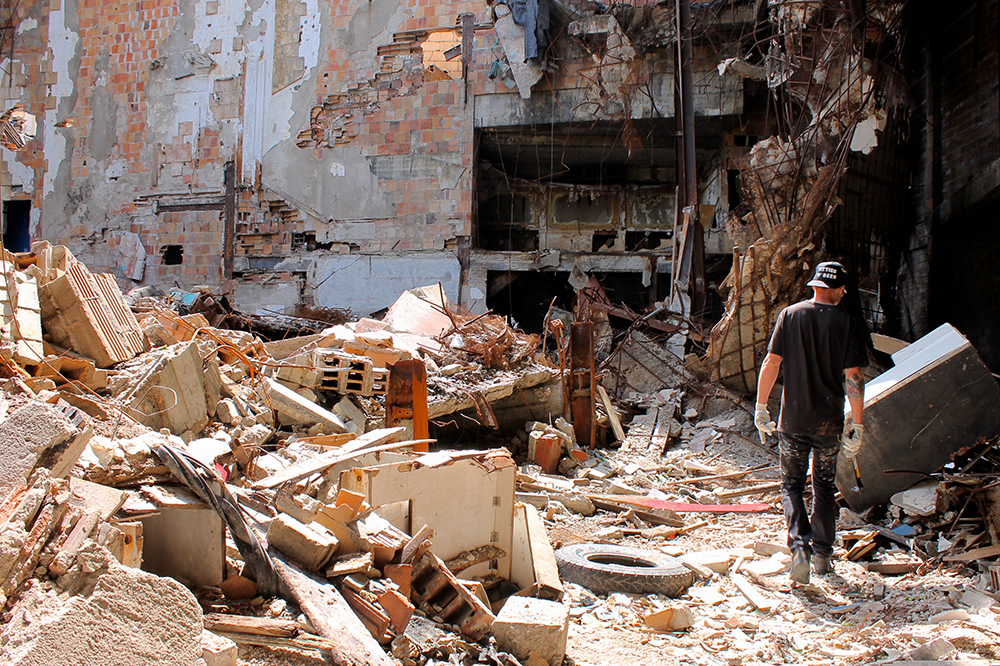 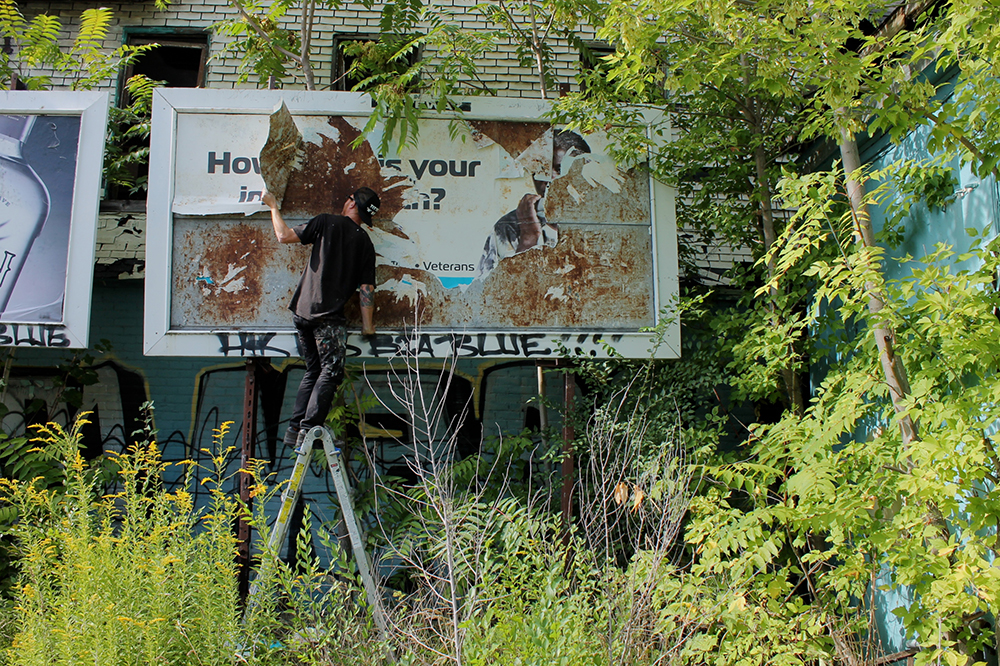 What do you look for in a finished piece of yours?
I’m on a never-ending search for the ideal balance between form and abstraction, the beauty of both textural randomness and deliberate strokes. I consider a piece finished when I have come as close to this point as possible, or I’ve gone past the point of no return. 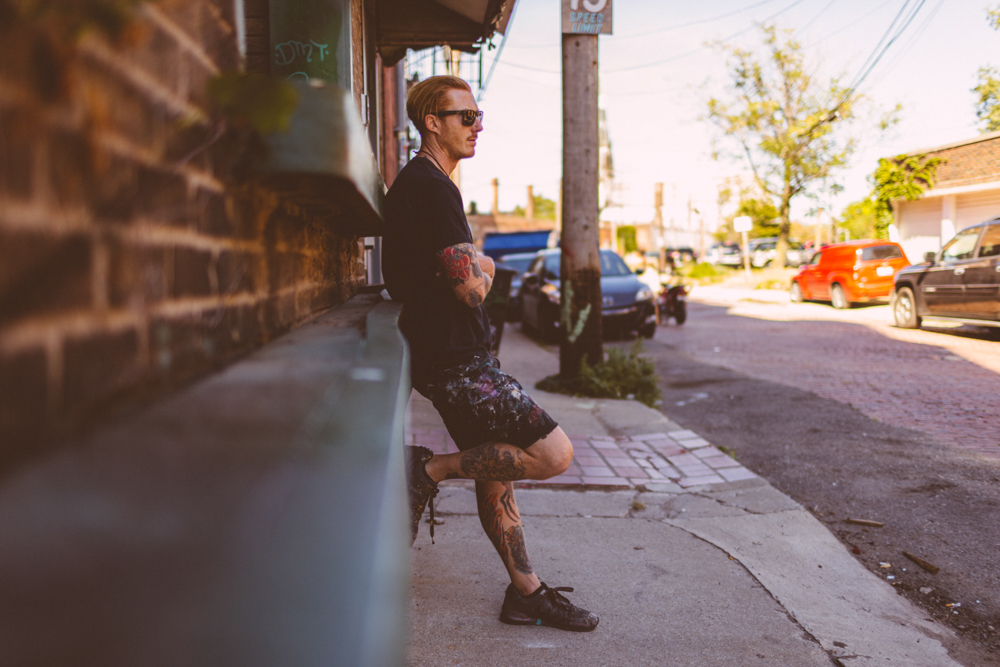 Spoiled Rotten will be shown at Inner State Gallery in Detroit, until this Saturday, October 11. Artworks that haven’t sold out are currently available for sale on 1xRun HERE. Images above shot by Jeremy Deputat and Miya Tsukazaki. Special thanks for Todd Knaak for his assistance on this article. Callum Preston
Greetings friends. This post serves as both an introduction of myself and an unveiling of a new studio space that I have been working on with friends for the past months. First off, ME. I’m honor... Bobby Hundreds
I’d always heard of Meggs, but didn’t get to fully appreciate the depth and breadth of his work until I was in Melbourne a couple years ago. Back when I was speaking at Carbon in Australia, I beca... Kazie Holiday
We’re not bragging (except for maybe a little bit), but The Hundreds’ HomeBase is really coming together. It’s surreal to admire an artist from afar, and then to watch that very same person throw u...
HIDE COMMENTS