Before Jeff Bezos and Amazon, the concept of a one-stop shop for literally everything one could possibly desire was limited to whatever was crammed into the Sears Roebuck catalogue. Even then, the wares on offer were humdrum to say the least and a far cry from the hyper-specific itch scratching that we demand from our e-commerce experiences today. The lone exception to this dearth of product variance came in the form of the fictional company that supplied the entire Looney Tunes cast with whatever fantastical product best served the gag of that scene.

Primarily patronized by Wile E. Coyote in his Sisyphean quest to capture and eat the Roadrunner, the mail-order company ACME spent decades shipping its cartoon customers all manner of products. Their panoply of items for sale ranged from sensible housewares to Geneva Convention-violating weaponry. In true capitalistic form, the fictional corp abstained from letting conventional ethics get in the way of a sale.

With a collaboration that tugs on the very threads of reality, IRL company The Hundreds has partnered up with this imaginary institution for a line of merch that would even make Bugs Bunny want to throw on a shirt (The Hundreds X Looney Tunes ACME releases this Friday). But believe it or not, this is not the first time the ACME universe has seeped into our own world. So, in celebration of the new products, here’s a list of some of ACME products that actually came to fruition. 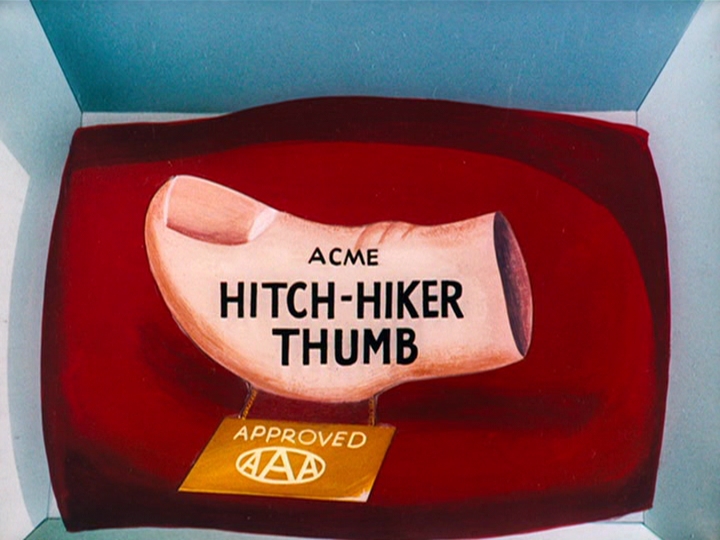 Back before catching a ride with a stranger was as easy as tapping an app, folks indicated they needed a ride by giving a thumbs up on the side of the road and praying a serial killer didn’t pick them up.

ACME’s comically-enlarged thumb product served to increase its wearers visibility and the not-so-impractical gag was even replicated in Pee-Wee’s Big Adventure. Today, though hitchhiking is now illegal, one can still buy novelty versions of the product that would likely confuse anyone under the age of 30.

A simple concept bound to yield painful results for their wearer, these skates are the quintessential ACME product that showcase the blue-sky concept zaniness of the Warner Bros. golden age.

Naturally, Johnny Knoxville, the closest we’ll ever get to a flesh-and-blood Tex Avery character created and tested a pair of real-world rocket skates for 2002’s Jackass: The Movie. Though he didn’t careen off into the Grand Canyon like his coyote counterpart, the results of this experiment were about as painful and unsuccessful as you might imagine. 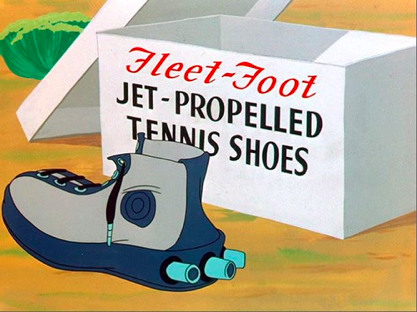 ACME’s footwear division remains unparalleled and, in another Roadrunner episode, Wile E. Coyote decides to test the entirely nonsensical notion of catching up to his foe on a wheeled pair of cross country skis. 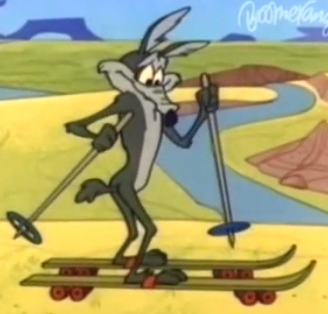 Astonishingly enough, and in the most, “seriously, white people?” twist imaginable, not only has this idea manifested in the real world, it’s become a full-fledged sport with leagues, competitions, endorsements and everything. 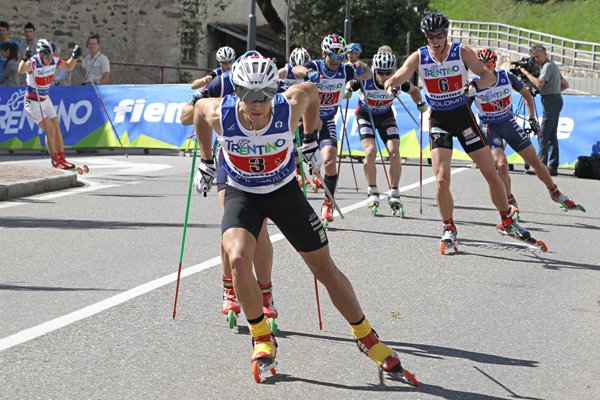 This is real. Photo: cccski.com

Despite Henry Ford’s assembly line and mechanized factories already decades in the past by 1960, the concept of a machine that could intake a product and spit it out, gift-wrapped, on the other end was the stuff of science fiction to the Looney Tunes writers.

Today, aided by computers and laser technology, these precision wrapping paper machines are a dime a dozen and a relatively perfunctory asset for larger companies. This one below is literally called the Giftwrap 3000.

It might’ve been fantastical when ACME initially conceived of these, but we’ve all seen Icarus by now. Pretty sure these are just HGH. 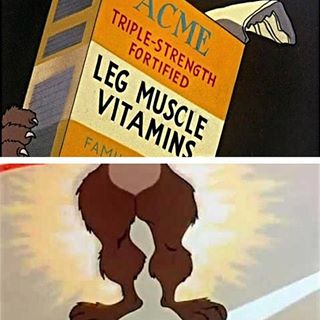 “Build a better mousetrap, and the world will beat a path to your door.”

This axiom held true for the ACME corporation and, in one of Wile E.’s more desperate efforts to snare his quarry, he purchased a humongous spring-loaded trap that, of course, wound up causing him grievous injury.

The man-sized mouse trap has since enjoyed a thriving existence in our world as a non-functional street art installation and as a terrifying working device that is almost guaranteed to kill someone.

A good portion of the coyote’s ACME purchases revolved around hiding himself from the roadrunner. At one point, he even went so far as to curl up inside a large, hollow artificial rock, which, presumably, was some real out-there future shit back in the 1950s. But as prognosticated a decade later in the film, The Graduate, plastics would be the world’s salvation before contributing in its demise. Before long, plastic rocks of all shapes, sizes, and sediments speckled well-maintained landscapes around the globe. 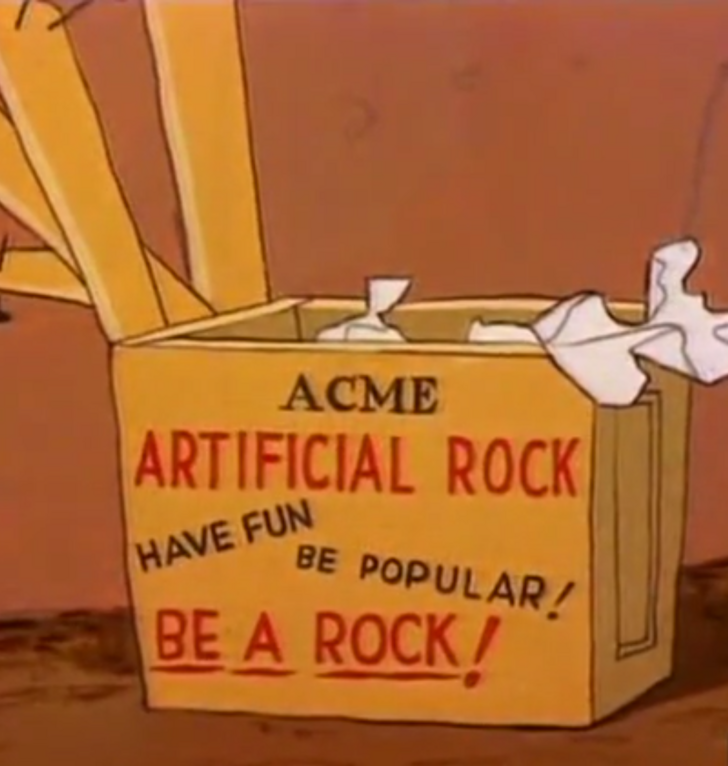 I suppose, if you really wanted to, it wouldn’t be too difficult to cut some peepholes and camp out in this big boy right here. But, as we are not living in a cartoon, such a move would be rather undignified.

Pioneering the way for future titans of fairway cheating like Donald Trump, Foghorn Leghorn once attempted to swindle an old college chum with these spheres of skullduggery only to have his plans quite literally blow up in his face. 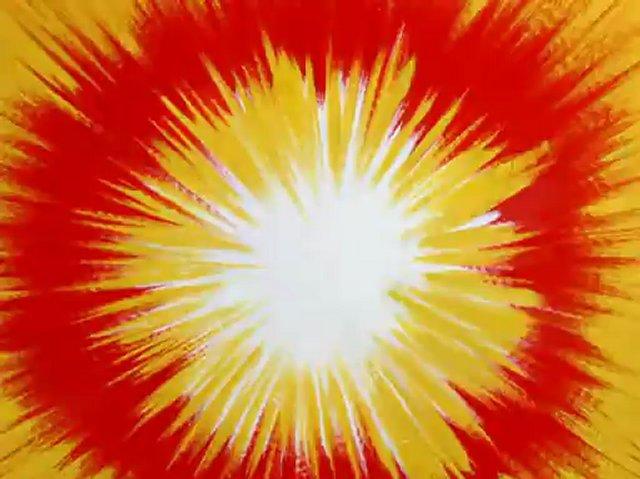 Similar trick balls on the market today, though these don’t pack quite the same punch as the ACME brand, instead disintegrating into little puffs of white dust that look as if your clubs have just elected a new pope.

No list of actualized ACME would be complete without a mention of the chain of Delaware valley grocery stores that shares the cartoon company’s name. While you may not be able to buy disintegration rays and rocket sleds at ACME Markets, they offer a wide variety of delicious pick-up-and-go prepared meals along with everything else on your weekly grocery list. And given the amount of money Wile E. Coyote has spent over the years in his fruitless efforts to catch his dinner, he might be better off just heading to an ACME market to pick up one of their affordably-priced rotisserie chickens.