KELSEY BROOKES :: THE SCIENCE & THE MYSTERY

Picasso had Marie-Therese, Warhol had Edie, and Koons had Cicciolina, but Kelsey Brookes has Acetylcholine, Histamine, Norepinephrine and GABA. These four neurotransmitters, which help regulate sleep, were the muses for his current exhibition, In Sleep: The Science and The Mystery, on view at Library Street Collective in Detroit till September 26.

Brookes’ interest in neurotransmitters stems back to his career as a microbiologist, during which time he tracked the West Nile virus and researched new ways to find viruses in blood bank donations. But in 2008, Brookes left this career to pursue fine art. “It was a slow realization that the path I was on was okay, interesting, and comfortable, but I wanted more,” he says. “Comfort is alluring, but ultimately it’s a dead end. I was young and wanted to shake things up a bit; see if this new worldview of self-directed destiny was in fact the way the world operated.”

Though Brookes chose art, science still shapes his work, as evidenced in his new exhibition. Neurotransmitters are represented in his signature style – colorful semi-psychedelic clusters and radiating patters – though there is more use of negative space. “Sleep implies a loss of our wakeful consciousness and I wanted the paintings to reflect that loss,” explains Brookes, who expands on in this, and more, in the following interview with The Hundreds.

I read that you were once a Microbiologist. What kind of research were you doing?
The first job I had was at the Centers For Disease Control and Prevention Arbovirus lab in Fort Collins, Colorado. My team and I were collecting blood from birds and testing it for virus. At the time, West Nile was a new virus in the U.S. and we were tracking its progress state to state as it moved west. Later, I moved to San Diego and worked for a Diagnostic BioTech Company called Gen-Probe. I worked in the research department coming up with more accurate, cost effective, and automated ways to find virus in blood bank donations.

And after that, you would come home and paint?
Yep, after work and especially on the weekends. Whenever I had a free second I was painting or surfing.

How did you go from being a biochemist to an artist?
The fall of 2005, I think, was when I quit. Nothing monumental happened that day. It was a slow realization that the path I was on was okay, interesting, and comfortable, but I wanted more. Comfort is alluring, but ultimately it’s a dead end. I was young and wanted to shake things up a bit; see if this new worldview of self-directed destiny was in fact the way the world operated. 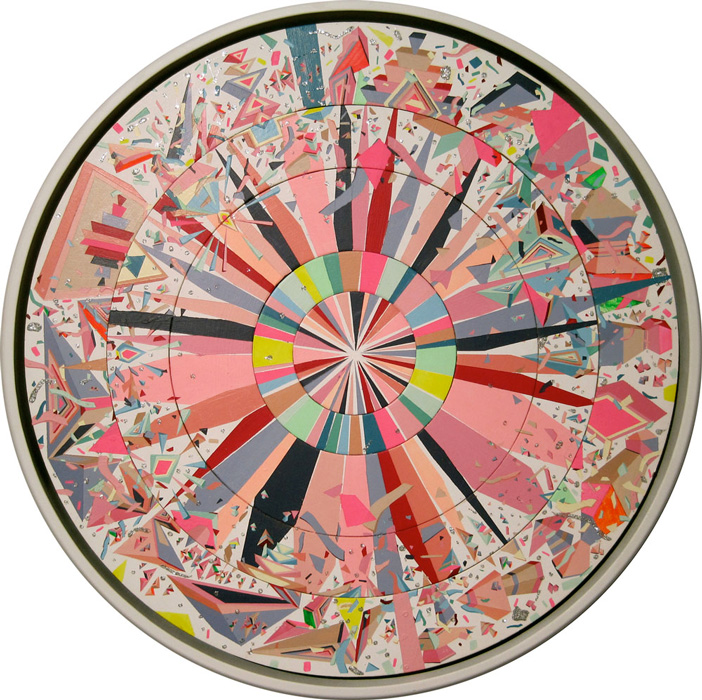 Besides biochemistry and molecular structures, what are you most inspired by?
The subjective feelings elicited by focused aesthetic visual experiences (symmetry, color, shape, and how that makes one feel). Trusting what that teaches me but also testing that against opposing views and instincts on the same topics.

Since your first solo show in 2007, how has your work changed?
The colors are the same but everything else has changed. The figure is gone, the background and foreground are gone. I have removed as much as I possibly can in an effort to focus. This focus now reveals some amount of truth about our world and what is at the core of intentionality and conscientiousness.

Further, molecules have a sort of rudimentary set of behavior patterns, which – at the level of a single molecule – are relatively predictable using the laws of physics and chemistry. When these molecules are en mass and organized everything we see and know is created. From space shuttles to emotions, molecules, and their behaviors make this world.

How much of your work is planned beforehand and how much is freehand/spur of the moment?
If I am painting a molecule then the layout of the painting is already done. I just have to scale it up and transfer it onto the canvas. After that, everything is a combination of instinct and accident, just like life. 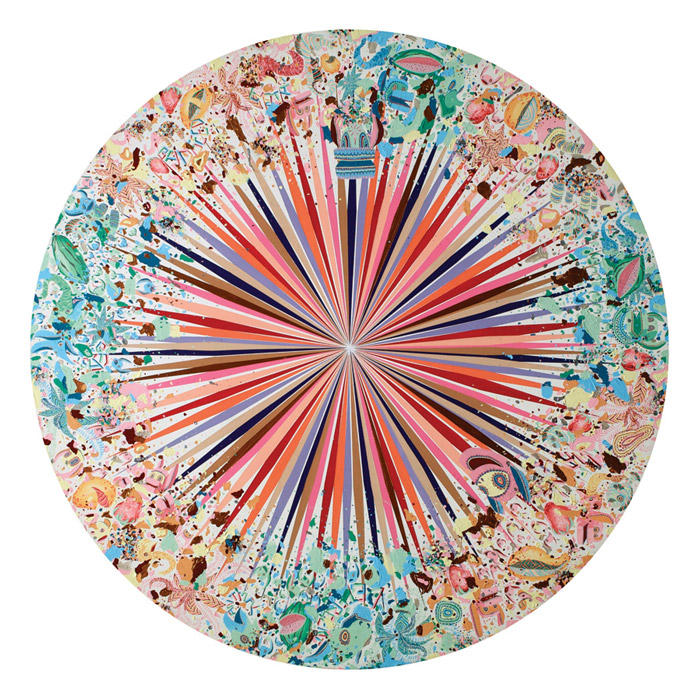 Your current show at Library Street Collective looks stunning. Can you explain the title and how it relates to the work in the exhibition?
Thanks so much! The title of the show is Sleep: The Science and The Mystery. The concept of the show is sleep. I have four neurotransmitters in the show – Acetylcholine, Histamine, Norepinephrine and GABA – that help regulate sleep in different ways, and a collection of more aesthetically-driven circle paintings. Also new to this show was the use of negative space. Sleep implies a loss of our wakeful consciousness and I wanted the paintings to reflect that loss.

What’s next for you?
I have two shows in mind. One about plants and some of the hallucinogenic molecules derived from those plants and another about poisons and venoms. They are fighting it out right now in my head to see which one gets created first. 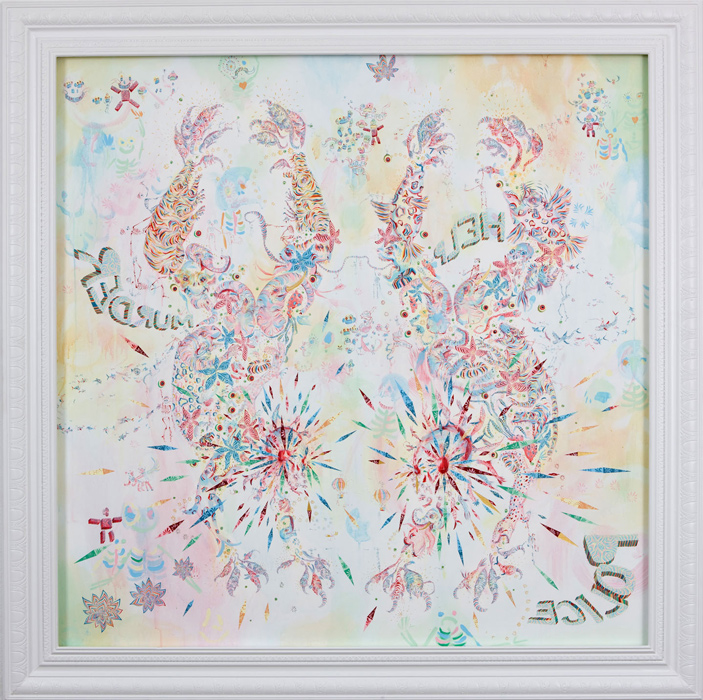 Best piece of advice?
“Your path is your Guru,” and this little piece of advice from Chuck Close: “The advice I like to give young artists, or really anybody who’ll listen to me, is not to wait around for inspiration. Inspiration is for amateurs; the rest of us just show up and get to work. If you wait around for the clouds to part and a bolt of lightning to strike you in the brain, you are not going to make an awful lot of work. All the best ideas come out of the process; they come out of the work itself. Things occur to you. If you’re sitting around trying to dream up a great art idea, you can sit there a long time before anything happens. But if you just get to work, something will occur to you and something else will occur to you and something else that you reject will push you in another direction. Inspiration is absolutely unnecessary and somehow deceptive. You feel like you need this great idea before you can get down to work, and I find that’s almost never the case.”

You can see Sleep: The Science and the Mystery at Library Street Collective in Detroit until September 26.