How Artist Woodrow White Uses Humor to Confront Our Monsters

There’s much to learn about humanity from Woodrow White‘s paintings. Some of them are profoundly humorous—a behind the scenes still on the set of a monster porn set, for instance—but humor is often rooted in truths behind our weird psychology: fear and ego-driven denial. Through a kitschy backdrop of movie sets, his series “Behind the Scenes” seems to reveal the insecurity, vanity, and illusions behind image-making. Woodrow’s most recent body of work represents a narrative process of exploration into these aspects of the human psyche that lead us to create and consume such images. As someone with a strong background in illustration, animation, and set design, he, in his own words, “experiments with the failure of the illusion, examining the nexuses of narrative, history and artifice” during “a time when all trust in images has been lost.”

Woodrow currently has work in the four person group show, “Hanging Gardens” at Downtown Oakland’s Athen B Gallery, alongside new works by Andrea Joyce Heimer, Michael Olivo, and Kate Klingbeil, who we interviewed earlier this month. The last day of the show is today, so if you’re in the area don’t miss it. 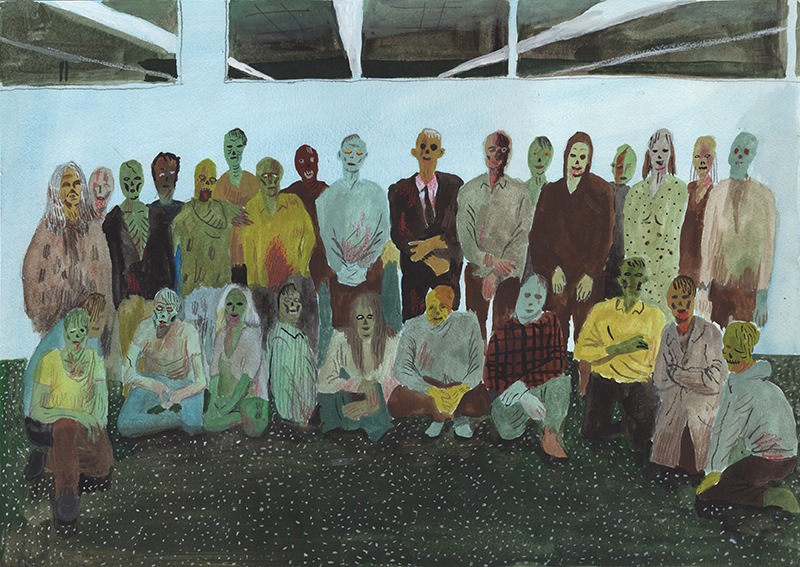 Brock Brake: What other ways do you express yourself creatively besides paintings?
Woodrow White: I’m also a freelance illustrator, and I draw in my spare time. I’ve done cartooning in the past and have made a few short films. When an idea for a project comes to me, it often tells me specifically how it wants to manifest itself. So I dabble in a lot of other mediums of visual art according to the needs of each project.

When I visited you in the studios, I noticed that you were listening to various podcasts. Which ones do you regularly listen to? Do the conversations you listen to influence the work you make?
“How Did This Get Made?” is a hilarious podcast. Each episode involves these three professional comedians sitting around talking about a terrible movie and its troubled production. “I Was There Too” is a series of interviews with extras or tiny-bit actors from famous films and their experiences on-set. “You Must Remember This” is a series of hour-long stories about Hollywood in the twentieth century. Often times it reveals how grim and seedy it all was. Come to think of it, a lot of my favorite podcasts are about filmmaking. Growing up in Los Angeles, I’ve always been fascinated with the physical process of creating a movie and the blood, sweat, and tears involved. Definitely informs a lot of my subject matter. 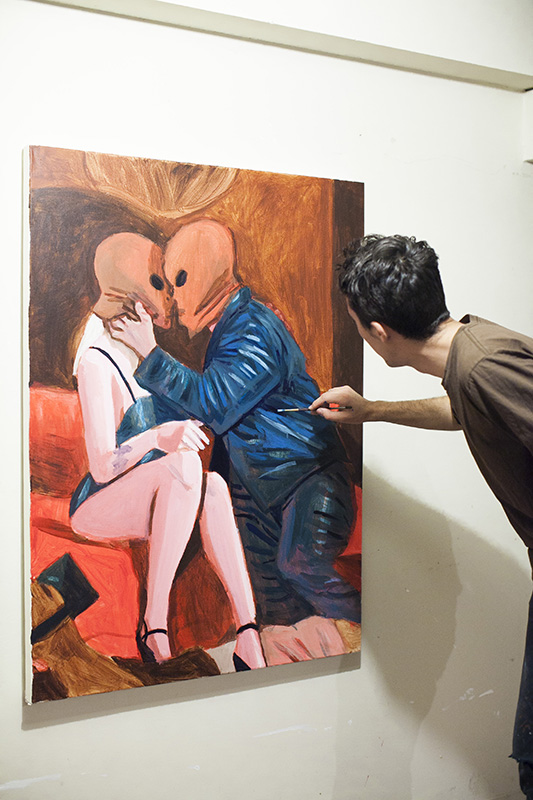 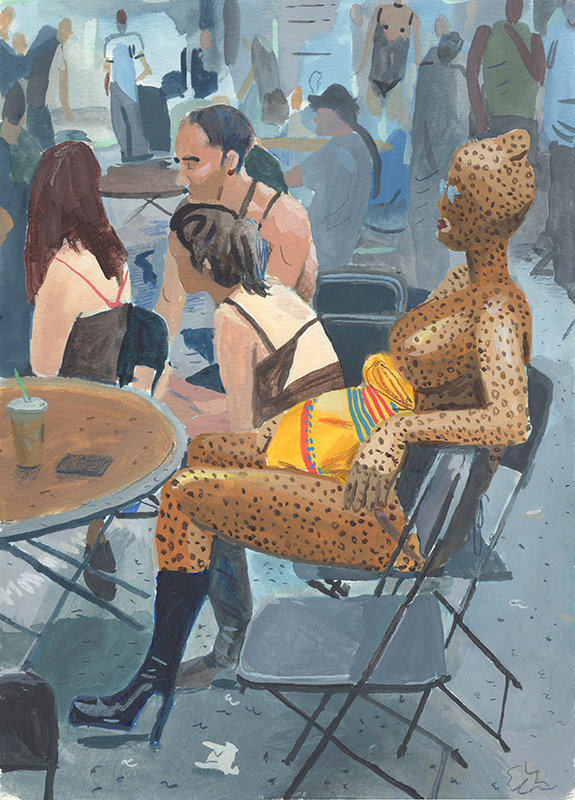 Your works depict monsters sometimes. Please elaborate on this choice, or instinct, to depict monsters engaging in very human activities.
I like the concept of the monster because it’s a very human projection of our fears and desires, masquerading as something otherworldly. Most of those paintings are actually depictions of humans dressed like monsters. I like to leave indications of what’s underneath the costume, like exposed skin, to break the illusion. Their pedestrian activities drive that even further. I prefer to paint from everyday life, and I find most surrealism to be self-indulgent and flat. But admittedly, I enjoy drawing from my imagination. So humans in monster costumes engaging in human activities are a kind of compromise for me. I get to keep my paintings grounded in the real world, while also letting my imagination play a little. For example, Bigfoot is fun to paint. But a Bigfoot impersonator? I think that’s so much more compelling. 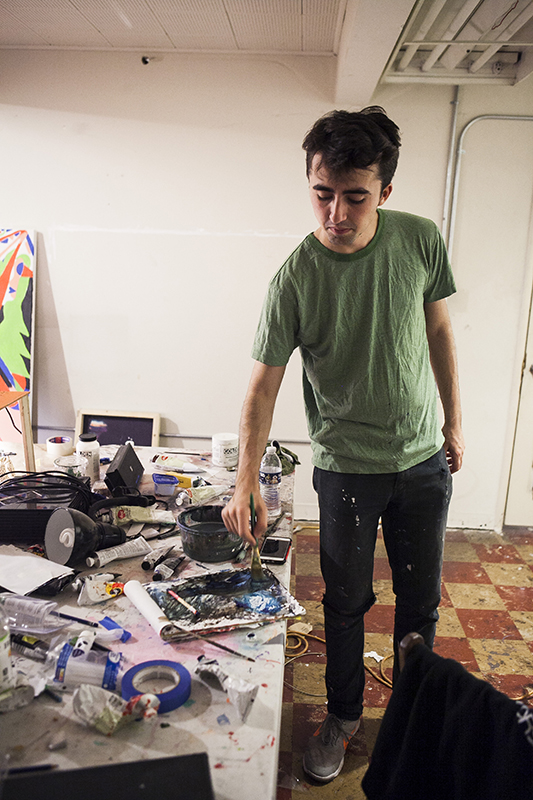 Please talk about your piece, “Not To Be Reproduced.” We want to know what it’s about and what it’s inspired by. What is the meaning of the title, to you?
I was looking at René Magritte’s work, specifically his painting “Not to be Reproduced.” It’s the one depicting a man with his back turned to the viewer, facing a mirror,and the reflection is the back of his head instead of his face. I began to think about how screens are our new mirrors, and how less strange that painting is in relation to today’s technologies. It’s so easy nowadays to view ourselves in real-time from any angle just by positioning a camera. So I conceived the painting as a twenty-first century response to Magritte’s painting. I used Donald Trump as my subject because he’s been haunting me recently, and he’s also a perfect example of a person who’s taken advantage of screen culture to make himself appear menacing and larger-than-life. My appropriation of the title “Not to be Reproduced” also adds another meaning—don’t imitate this man!

“[DONALD TRUMP IS] A PERFECT EXAMPLE OF A PERSON WHO’S TAKEN ADVANTAGE OF SCREEN CULTURE TO MAKE HIMSELF APPEAR MENACING AND LARGER THAN LIFE.” 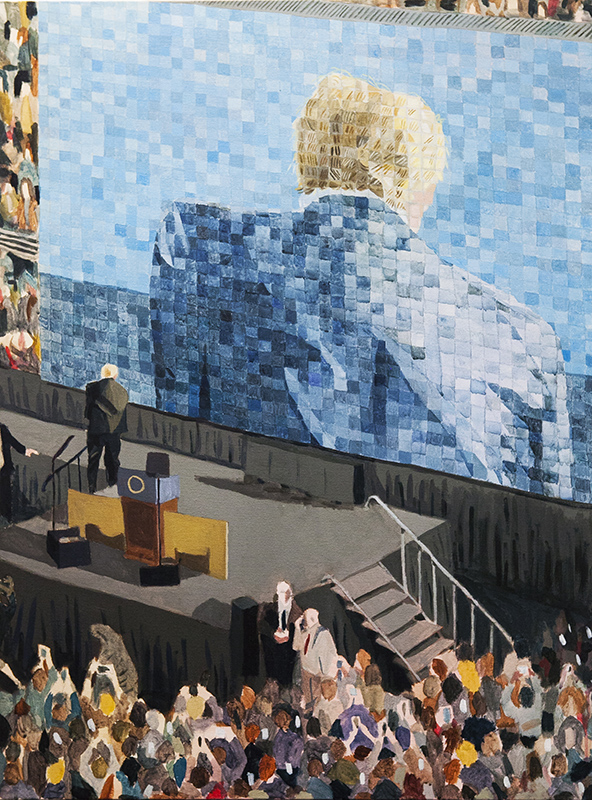 A lot of your work for “Hanging Gardens” is rooted in today’s culture. For example, three bikini monsters posing with their selfie stick, the grim reaper taking a break from sign twirling to check his phone. Can you elaborate on this imagery and how today’s technological culture becomes relevant in your work?
It goes back to what I was saying earlier about the illusion of the monster, and how much it’s broken when the monster engages in some banal activity. It’s just a very new banal activity. I also use modern electronic devices as a sort of signature of our time period. I think painters strive to make their paintings timeless, but there are elements which will give away their age. Especially if you’re a figurative painter. Not too long from now, paintings depicting newspapers will look ancient. It’s inevitable, and there’s nothing wrong with that. You’ll often hear in rap and hip-hop songs the artist exclaiming the year the song was recorded. They’re like snapshots of that era. 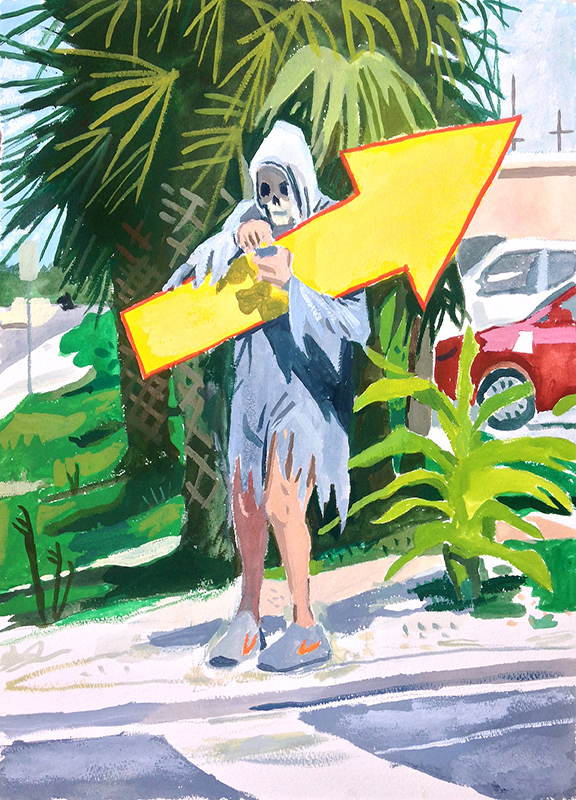 One piece in particular, “Man Cave,” is sort of graphic. Can we ask how you came up with this idea? Or, more specifically, why the idea of a man enjoying himself alone became a painting for your audience to experience?
It began with how much I hate the term “Man Cave.” It’s an ugly example of how fragile the male ego is, that we need this safe space to act out our often graphic masculinity. I think we call it a cave because we’re secretly conscious of how prehistoric the concept is. I was also thinking about Plato’s Cave and how the Man Cave is an extension of this allegory—Plato’s Cave representing any limited worldview we’ve been born into and refuse to leave. The virtual headset, on the other hand, is less of an allegory and more like a literal version of Plato’s Cave. It’s like watching a movie, but you’re trapped. Even if you turn away you’re still watching, because the screen is strapped to your face. And now they have virtual reality porn. Porn’s been around for a long time, but it’s always been an act of voyeurism for the viewer. Now virtual reality’s convincing you that you’re actually having sex from a first-person perspective. But you’re not actually there, you’re just jerking off in a dark room. Caves within caves within caves. 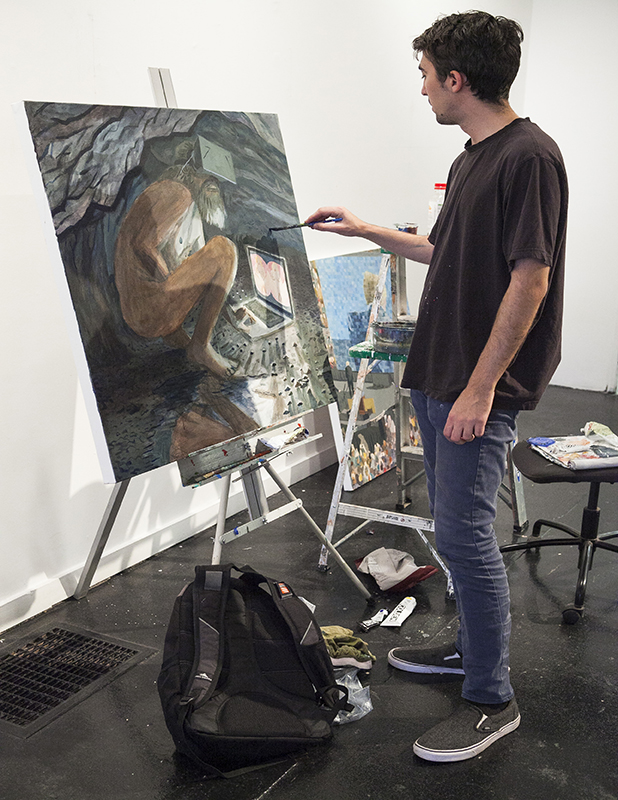 You’ve been back and forth between LA and the Bay Area for some time now. How would you compare the art communities between the two cities?
LA has a much larger art scene with more opportunities for different types of artists. Oakland’s is much smaller, and I never thought I would find a suitable art community here when I first left art school, but to my surprise, I have. Both cities are great. You just have to dig deep. 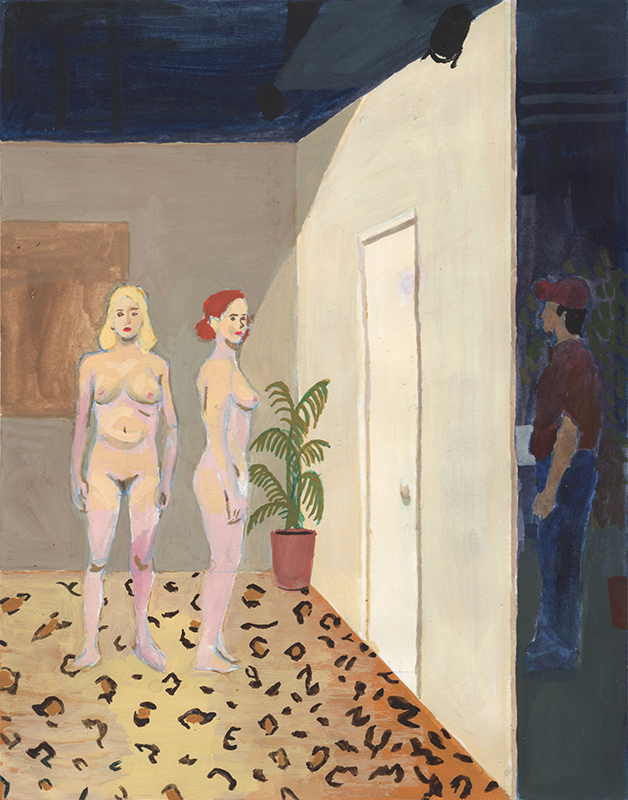 What are your hopes for the future—personally and professionally? Do you have any goals for your career or something you are working towards in your life?
I want to keep making art for the rest of my life, whatever that looks like. I once read Picasso describing how finishing a painting is like killing it; taking its soul. I agree with that. I get antsy whenever I stop creating things for long periods of time. So to constantly be in the process of making is very life-giving for me. And to do it as a profession—it’s amazing! Brock Brake
"I have been told to not speak about my work, that the work should speak for itself. The more friction the work causes, the more I feel I have to make it." Kate Klingbeil's unapologetic work. Q&A with Artist Ken Kagami :: Art, Humor, and the Obscene in All Objects

Tasos Gaintatzis & Marina Legaki
A Q&A with the artist Ken Kagami, whose simultaneously perverted, innocent, and whimsical art juxtaposes objects from the world of adult and child in humorous and often understated ways.
HIDE COMMENTS