Perhaps you’ve seen a Ferragamo Falcon in the wild, dive-bombing beak first at a coiled Valentino Viper, their supple leathers and delicate embroideries entangled in a fashion house fracas. Or, perhaps, you’ve listened to Guapdad 4000, the Oakland rapper and nattily dressed amateur zoologist, who discovered these exquisite specimens in the silken recesses of his mind. Though he’s only released a single mixtape, last December’s Scamboy Color, Guapdad 4000’s self-mythology is rich––rich in alliteration, rich in finessing and scamming (“finnaming”), and, when the mood strikes, rich in the details of life hectically lived.

“Finamming” is played as a joke, but it isn’t, really. With both parents in and out of prison at occasionally overlapping intervals, and with his siblings and grandmother in need of care, Guapdad turned to shoplifting, credit card swiping, and fencing stolen goods. His rap career only began in earnest when, tired of the boom-and-bust cycle of petty crime, he took a bus to Los Angeles with $20 in his pocket. With songs like “Scamboy” and “Big Ass Baby,” he’s found a constructive outlet for a colorful personality informed by the antics of Mac Dre. The Ferragamo Falcon is poised to soar, the Valentino Viper has its fangs bared. 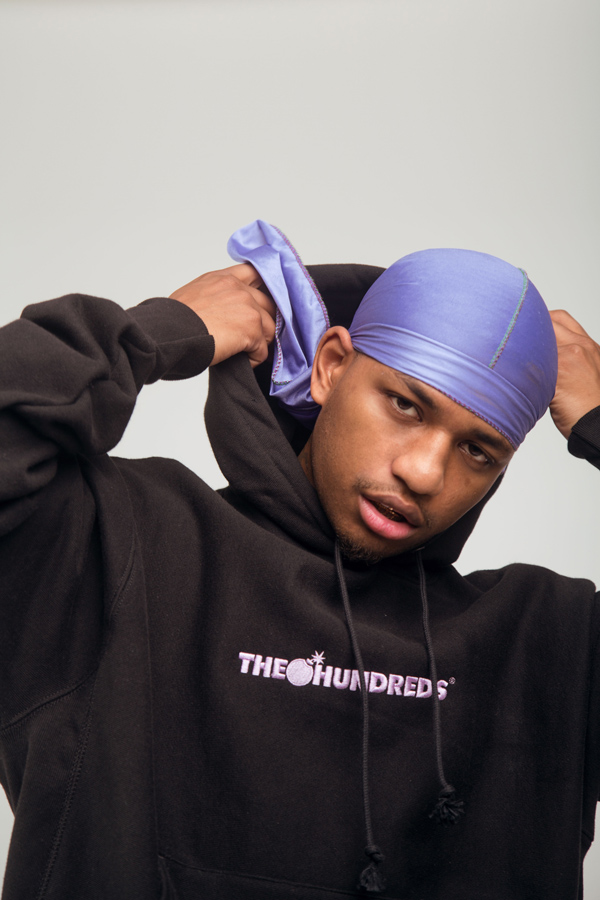 TORII MACADAMS: What does the Bay Area sound like to you?

GUAPDAD 4000: What does the Bay Area sound like to me? It sounds like a lot of pimpin’, a lot of struggle, but a lot of celebration. The Bay Area is the type of place where we really celebrate wins and losses.

What is the natural habitat of the Ferragamo Falcon? Does it share an ecosystem with the Valentino Viper?

The Ferragamo Falcon resides in the Versace Skies. He’s able to Moschino Metabolize certain Prada Particles that it may or may not come in contact with, and that’s how it maintains its sustenance. But sometimes just for fun, he might fly down, hover over the Margiela Mountains and wait for unsuspecting Jewish or Indian dudes to scam on.

Is a falcon your spirit animal? If not, what is?

A falcon is not my spirit animal. I am my own spirit animal. Guapdad 4000 is a universal spirit animal that everybody should tap in with. So just go ahead, focus your Armani Aura, and then you can feel my presence.

What is the proper method for worshipping the god Mac Dre?

The proper way to worship the GOD that is Mac Dre is honestly to play it at ridiculously loud volumes. If you’re into narcotics, I suggest you go ahead and do some ecstasy. And if not, just pour up some Hennessy AKA hen and have yourself a good time. You wanna go ahead and get out the car at every stop light, make sure that other cars around you know that this is the automobile that you chose to operate tonight, and you’re doing so very irresponsibly.

What is the feeling of successfully completing a scam?

The feeling of successfully completing a scam is actually hella crazy because it’s a rush. You feel like you just—you’re fucking Danny Ocean, Ocean’s Eleven, baby, we to the top!

If you had to choose one album to take to a deserted island, what would you choose?

One album to take with me on a desert island, umm... [shakes head] Dark Fantasy, Kanye West.

What financial advice would you give the younger version of yourself?

Financial advice I would give old me… STOP DOING THAT SHIT! STOP IT!

If you could pickpocket anyone who would it be?

If I could pickpocket anyone right now, it would be somebody with some sort of like Platinum Visa—no Black Card, that’s too much security. But just somebody with maybe like a $50,000 limit, I’d just go run it up, you know what I’m saying, fuck it up.

How would you describe yourself to someone with no knowledge of rap?

If somebody never heard rap music and I had to describe myself, I would probably be: What happens when you take a Versace gumbo pot, you throw in Dragon Ball Z—the first 3 arcs, all on Blu Ray in original Japanese—in there, some Hennessy, and a Oakland Raiders jersey? It’s gonna taste like Guapdad 4000. Oh, and then after you plate it, of course we gotta plate it on all Versace plates. It goes good with some type of vintage merlot. And uh, sprinkle some pimpin’ on the top.

Honestly, the line between internet and rap fame is so faint that it’s nothing but a veil of publishing. That’s it. Internet people don’t really get publishing but I feel like at this point, the Vine, the Youtube, the Twitter, the Instagram personalities got more of a long-lasting fanbase because they got the youth, as opposed to rappers and rap songs who got shorter attention spans. Like, if you can get the youth to really pay attention to you permanently, like some of these Youtube dudes do, then they get to have people grow up with them, as opposed to rappers who we’re used to songs being hot and and not anymore.

What are the differences between Los Angeles and the Bay Area?

The main difference between the LA and the Bay is the Bay Area is a hub for intellect and creativity. LA is the hub for industry and execution.

Do you derive special powers from your durags?

The durag is a holy crown, only to be donned by the chosen kings. You gotta be the waviest of the wavy to equip the silk to the scalp. And that’s what I do. The powers that it give me is the power to Margiela Manipulate any soul that I come in contact with, while I got it.

…So the frontal tie, I’m always distracting you. That let me know how I can play the game. So I’m always distracting you with the frontal tie, I’m moving the Balenciaga Bangs, oh my god, I’m shaking it like a white boy, you don’t know what’s going on, you don’t take me seriously, and I hit you with that flavor, HAH! Sneak attack. So that’s really the ninja tie.

“The durag is a holy crown, only to be donned by the chosen kings.”

The side tie, it dangles. It’s always not in my face, but it’s in your attention. It also serves as a distraction, but it’s really more mind control. I don’t have to sneak attack you, I can dangle it, let it shake [shakes head], oh my god, what is this? Hermes Hypnotiser. What you want me to do? Anything that I say. And then the classic back tie, it’s just sexy. The Balenciaga bitches love it, and anything they love, I love. Really it’s more of the other way around. They gon’ love anything I love, but you gotta be fair, right? By Any Memes Necessary :: KA5SH on the Culture-Pushing Art of Making Memes

Senay Kenfe
In a world poisoned by fake news, there's only one medium of truth left: The Meme. We talked to memer KA5SH on the divide between black and white Twitter, ownership, and where content creators stan... Torii MacAdams
"[Writing] got me out of a lot of trouble... The paper was my best friend." A conversation with one of the Bay's most underrated MCs (and one of our personal favorites) Young Gully. Senay Kenfe
A key figure in shaping Houston's music scene in the past decade, and a champion of DIY, we caught up with first-generation Nigerian-American rapper Fat Tony before his tour with Epitaph Records' T... Torii MacAdams
"The camera’s just an extension of my body. That’s what I do." You may not know Chi Modu, but if you love rap, you love his photography. We caught up with the photojournalist & hip-hop document...
HIDE COMMENTS