So on December 18, 2015, while the world was shitting itself over Star Wars, Netflix released a little cartoon that shattered those brave enough to give it a chance.

At first glance, F is for Family looks like a Family Guy or a The Simpsons wannabe. But a few minutes in, you’ll find comedian Bill Burr and Michael Price’s animated series has nearly nothing in common with those. Maybe The Simpsons a bit. F is for Family uses a post-Vietnam War ’70s setting to dissect a family of five (voiced by surprising heavyweights Laura Dern, Justin Long, Bill Burr, Sam Rockwell, and more) in an uncomfortably real fashion. The apoplectic dad, Frank Murphy; the lost mother, Sue Murphy; a rebellious teenager; a nerdy elementary schooler; and an adorably psychotic daughter make up the house. Each of which give fully-realized insights to the intricacies of an American family waiting for any form of assuagement, only given humor by the fact that they’re a cartoon. And yeah, they say funny shit. You’ll feel uncomfortable.

Spoilers ahead, but, come on.

Each of the 6 episodes serves as a vignette to explore different realities and characters of their world, but together make one cohesive storyline. Episode one, of course, is dedicated to mapping the relationships and family’s state of mind, while defining Frank as the lead. Just as importantly, it establishes the show’s knack of using a sitcom formula to dig deeper than one would typically dare; in the same vein as Louis C.K.’s new Horace and Pete. Watch Horace right fucking now by the way.

Due to its ’70s setting, conversations remain unfiltered and offensive without being overly crude—material like this is integrated into side comments that don’t have intended malice but are rooted in the times. For instance, Frank’s favorite show, Colt Luger, features a white Steven Seagal-like character taking down the city’s underbelly, which of course is “infested” with every other ethnicity. His catch phrase being, “A man’s gotta do what a man does.” But since the show is only three hours in its entirety, it opts to put the setting slightly in the back seat with a road map, letting the character’s drive. Each family member has at least one scene that personifies Bill Burr and Michael Price’s evaluation. Not to say there’s only one moment per character. 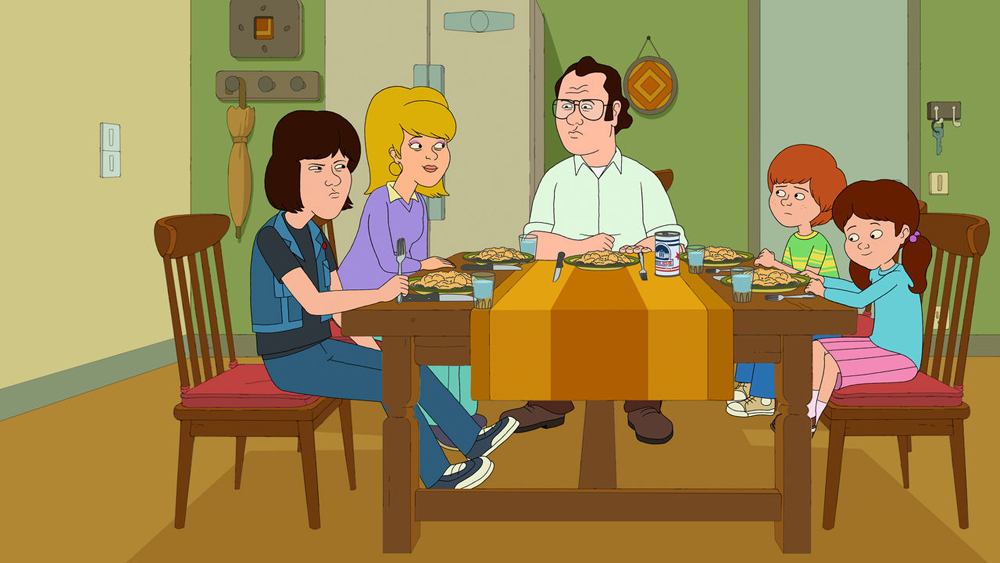 Susan Murphy, voiced by Laura Dern, has some of the most emotionally impactful moments, but probably the fewest lines and plot-driving contributions. But at the same time, that’s kind of an unorthodox character development method unto itself. Her lack of a defining presence taps into the family gender roles of the era. Laura Dern’s nuanced voice acting is so cleverly understated that you might misconstrue her words for filler. It’s more how she talks—with her soft-spoken, tragically quivering voice—than what she says. Her moments are usually reserved for silence.

In fact, some of the silent moments in the cartoon speak the loudest. Sue, other than helping around the house, tries to fight off her quiet hopelessness with a little Tupperware-packing “hobby.” In one heartbreaking scene, she sits at the dining room table putting together Tupperware packages, with only a dripping faucet, a silent dog, and her own forcibly optimistic narration as a companion. She finishes and says, “Now I got the whole day to do whatever I want,” (or something) right before bursting into tears so obnoxious, she covers herself in the Tupperware she was packing. This is where F is for Family shows its expertise. It’s almost hilarious at first—you understand what’s happening, but it’s still comical. Most shows would leave the scene there, having said all they need to. But Bill and Michael force you to watch this woman bawl for twice as long as you want to, driving all the humor out of the moment, reminding you that she can’t leave the scene either. And it doesn’t even end there, her cries drive even the dog out of the room, who she begs to come back by tantalizing it with the only thing she has to offer, leftover cheese. The show delves deeper into her lack of a purpose and ennui, even going as far as to give her an opportunity for the part-time job she’s been craving, only to have Frank secretly deny her access because he doesn’t want to run the house or cook. He just wants peace. Because “A man’s gotta do what a man does.” 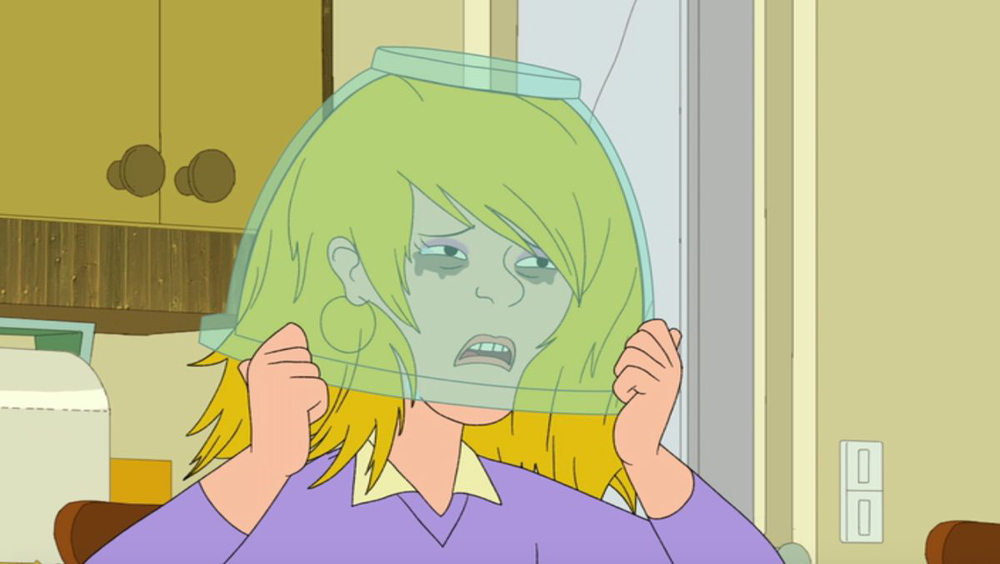 Kevin Murphy, played by Justin Long, is at first glance your typical rebellious fuck up. But a closer look reveals a cliche heart of gold presented in an understated and original fashion. He’s constantly jumping in front of his father’s bullets, protecting his younger brother, Bill, and struggles with trying to make good grades and love his family. And even once his father manages to get him tickets to his favorite “stoner” band, he comes decked out in a lame cape ready to rock, but the band gets booed offstage to make way for the cooler Led Zeppelin-types. He’s a genuine-hearted nerd who resorts to brutish tendencies as a defense to his father’s misguided abuse. When his dad lies about sending him to the military for behavioral correction, both Frank’s unrelenting rage and Kevin’s sensitivity come to the surface. As if the news weren’t enough, Frank says, “It’s a win-win—you’re done with school, and we might get a nice folded flag out of it,” through Kevin’s promises of being a “good boy.” It’s fucking hilarious. Once it’s revealed that he’s just being dragged to Frank’s job at the airport (where he, for the first time, defends his father from an elderly lady chewing him apart customer service-style), their relationship seems to be mending. But the car ride home actually examines Frank’s point of view a little more: Kevin expresses his shock at the humiliation his father must endure, and doesn’t stop expressing it. The frame lingers on Frank’s silent and stoic face as he just takes every well-intended reminder of his lackluster life, a life given up for the person dishing out the blows. “A man’s gotta do what a man does.” 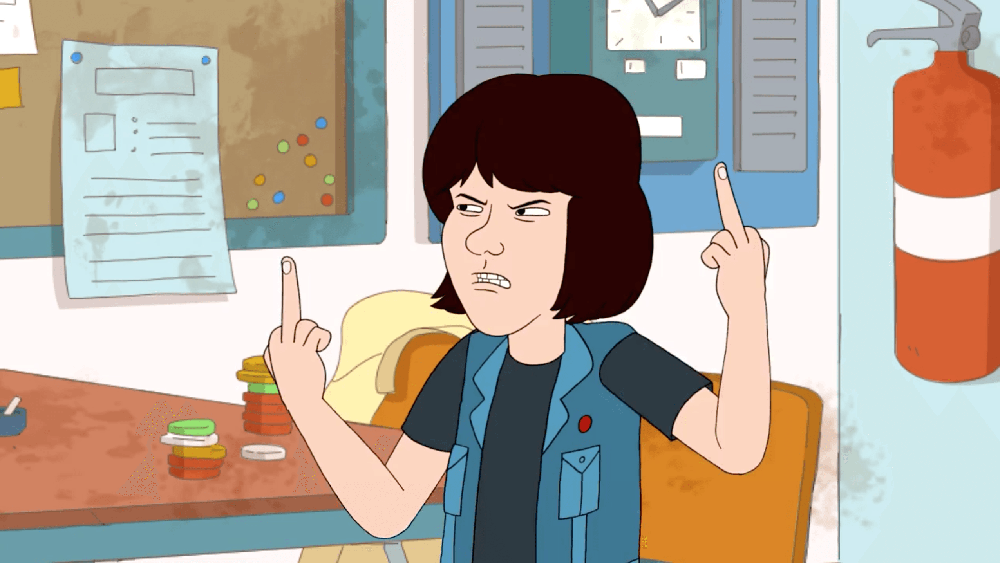 Bill Murphy, brought to life by Haley Reinhart, is the second youngest of the family. His role in the show is like a backwards Scout Finch-type, where his family’s dark complexities and hidden agony are used as paint—him, a blank canvas. He’s an innocent kid, picked on by a bully, loves his little sister, and just wants to hang out with his dad. He’s illustrated best when he finds himself forced to avoid his parents by hiding under their bed. What ensues is one of the most organic and painfully exposed marital arguments ever put in a cartoon—where the Frank basically talks shit on each member of the family in a way that’s only to be heard in an adult argument, lest it be taken in by a child’s ears who can’t grasp context or Frank’s level of sincerity. Sue unveils her contempt for her husband right before they hate-fuck directly on top little Bill’s silent, crying head. Even though everyone tip-toes around him, thinking they’re keeping adult secrets, he’s wildly aware and absorbing adulthood’s harsh realities without guidance. Like when he’s forced to go to the football stadium’s bathroom alone (where he sees the grown men puking and pissing all over each other) because his father is trying to impress his boss so that Bill can eat. Because “A man’s gotta do what a man does.” 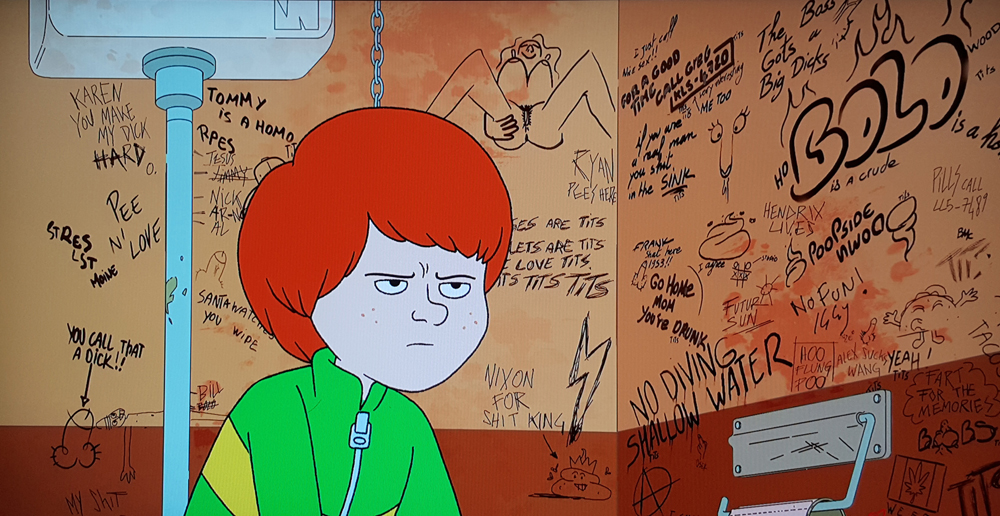 Maureen Murphy is played by Debi Derryberry, and is probably the least focused character of the family. Through six episodes, all she really serves is a look at how the troublemaker goes unnoticed because she’s “daddy’s little girl.” Other than that, she’s used more to drive Bill’s character study. She has her moments—which the A.V. Club covers so damn well (much like the rest of this article to be honest)—like when she hurts herself and says to Bill, “I can walk, but I still want you to carry me.” Because “A man’s gotta”—okay, that one doesn’t work here. 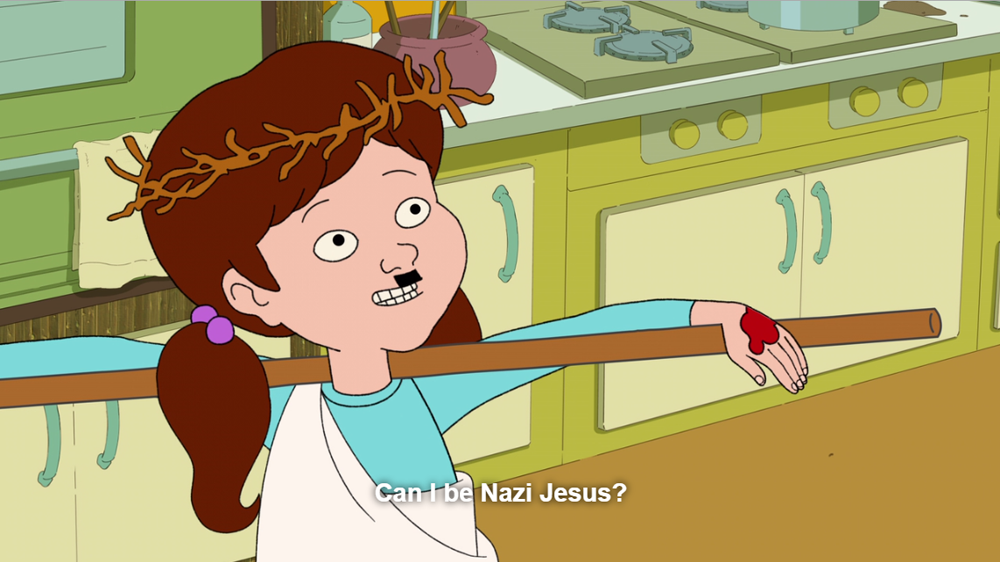 Then of course, there’s Frank Murphy, the story’s hero/anti-hero voiced by co-creator Bill Burr himself. His entire existence is epitomized in the title sequence: He starts out wearing a collegiate gown, ascending into a beautifully psychedelic sky full of promise before, mid-flight, a draft letter and rifle bound themselves to him. Then bills, a baby, and before he knows it, he’s lost his hair, vision, gained weight, and is literally wading through a sea of broken adulthood paraphernalia only to fail in his objections and end up falling from the sky into a house unhappily surrounded by his family. So he’s pissed.

He’s without a doubt the most fleshed out character, to the point that you know his ticks by the end of episode one. While every segment is filled with close examinations of Frank, it’s the show’s final Christmas moments that really wrap it up. After having successfully mediated a compromise between the striking union and management at his airport job (a task plaguing him from the get-go), Frank still gets hilariously fired. He arrives back at his house and, from the outside snow, watches the Murphy’s revel in Christmas cheer; by this point, his family is as close to “fixed” and “happy” as we’ve seen them, thanks to a family brawl against Bill’s bully’s family, Bundy style. He doesn’t want to ruin this rarity, nor does he know how to explain that their life is basically going to go to shit. So he stands outside and utters the final words of the show: “You can do this, Frank,” paired with a deep breath. Almost immediately, he follows it up with a, “No, you can’t.” So what does he do? He does it anyways. “Because a man’s gotta do what a man does.” 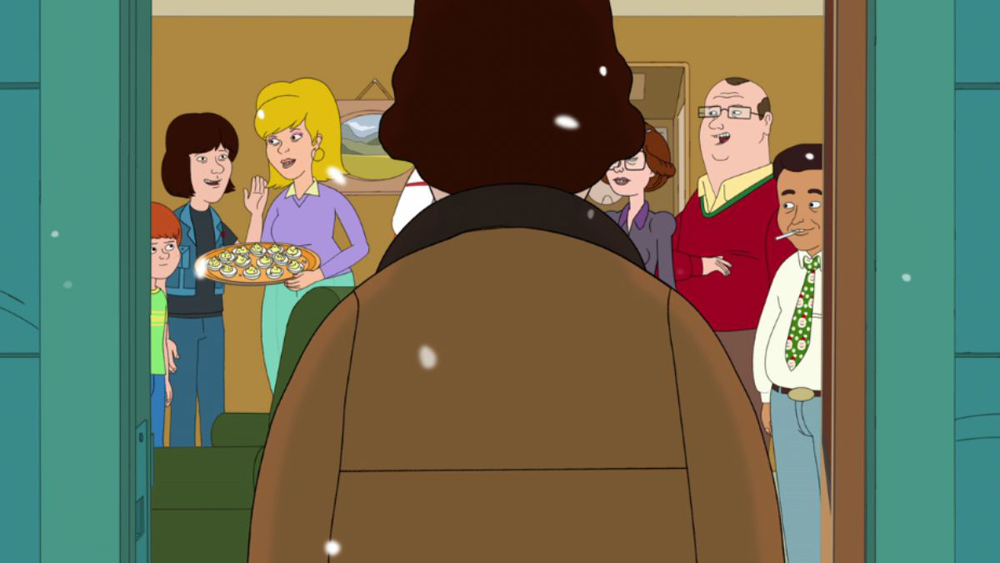 Duke London
Before we release our highly anticipated collaboration with Lee Jeans, we spoke with the person in charge of balancing tradition and technology at the 130-year-old American institution.
HIDE COMMENTS