THIS ARTIST LIVES VICARIOUSLY THROUGH A CHARACTER HE CALLS "STINK"

In Evan Rossell’s pieces, paintings and illustrations, a happy, hairy monster named Stink gets to have all the fun. He can be seen climbing out of a hole in a brick wall, painting graffiti on the back of a llama, and carrying the boulder from Michael Heizer’s “Levitated Mass” on his back.

“It’s safe to say the characters represent myself and my friends, just doing what we do best,” Evan explains. “Sometimes though, when I paint my characters doing certain things, it’s almost a way of letting out the frustration that I am having at that moment. For example, when my character Stink is spray painting a wall, it means that in reality I wish I was doing that same thing.”

Raised in Southern California, Evan created his characters in high school as a way to pass the time in class. “During my senior year, I finally found the courage to take my doodling to the next level and began painting, and that was really where my characters began to take life,” he says. “With all of the excitement and new mediums, I just couldn’t stop drawing and painting, which inevitably led to me having my first art show and eventually gave name to my main character, Stink.”

Since then, Evan’s work has graced walls, galleries and magazines, and has become sought after by collectors (we particularly love his recent commissions on skate decks and surfboards). In this interview with The Hundreds, Evan discusses how SoCal impacted his aesthetic, his progression as an artist, what he needs in his studio at all times, and what he has coming up next. 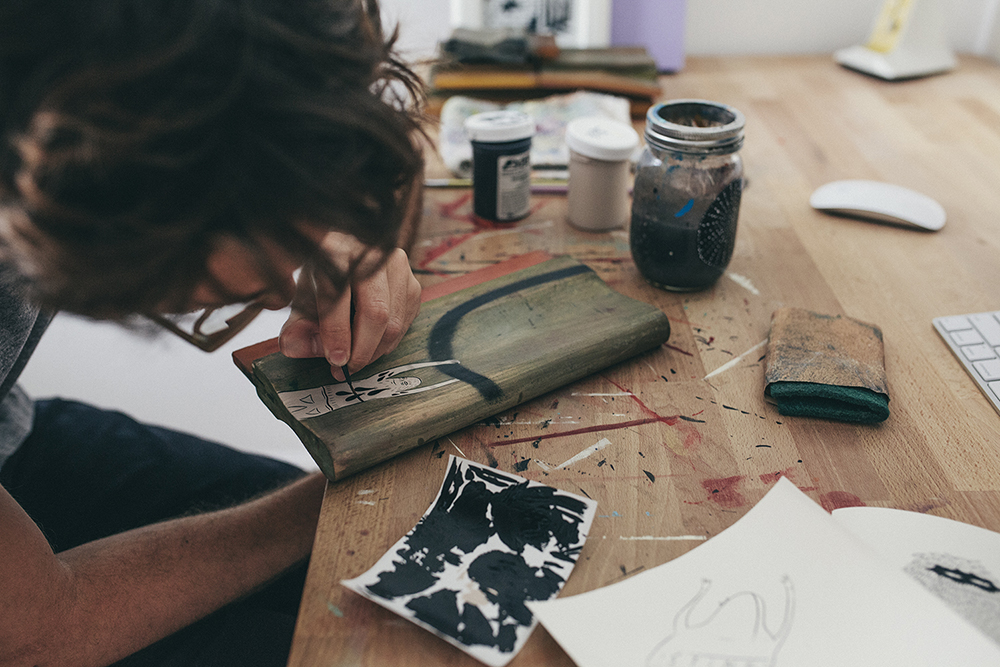 ZIO: You’re from Costa Mesa in Southern California. How do you think SoCal impacted your aesthetic?
EVAN ROSSELL: Growing up, there were so many things to do. You could wake up and go surfing, then two hours later go skating at the parks, then at night go to the city if you felt like it. Growing up in California presented me with so many opportunities that I would have never had in the other states that I lived in. Yeah, they were great, but they were nothing like Southern California. Having so many places at my hands allowed me to meet so many different people and explore different hobbies, so that I could grow as a person and make life friends and connections in different industries. Did you go to art school or were you self-taught?
I did not go to art school. However, in my senior year of high school, I took one basic commercial art class taught by Matt Harward. He seriously was such a rad teacher, not just for teaching art but also for truly teaching me about being confident in myself and to not be scared to show the art that I was experimenting with at the time. He also taught me to not be afraid to fail, because failures always teach us how to become successful. His go-for-it mentality worked for me and it gave me the push that I needed to actually commit to doing artwork as my career and to realize it wasn’t just a silly hobby. Shortly after graduating high school, the encouragement my teacher impressed upon me allowed me to comfortably begin learning and experimenting with different styles and mediums, which progressed to me building a style I can now call my own. 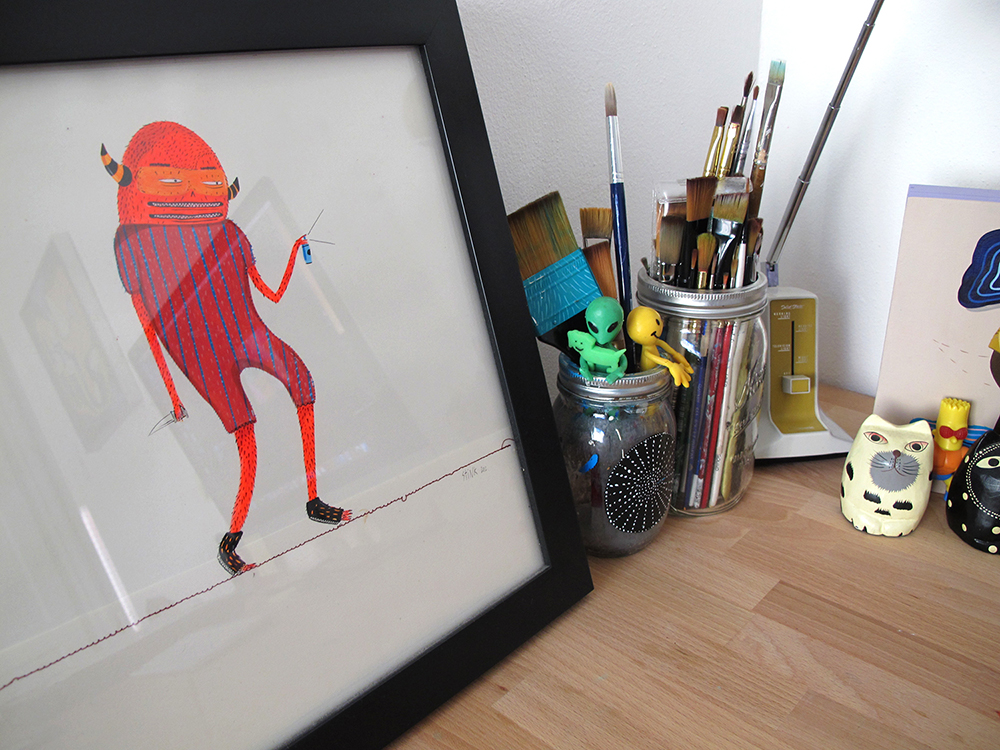 When and why did you first start making your characters?
High school wasn’t really my favorite place to be, so to pass the time in class I’d doodle nonstop on my classmates’ binders, shoes, my homework, you name it. So I guess you could say I first started experimenting with designs that resembled my character in high school, probably around 2004. During my senior year, I finally found the courage to take my doodling to the next level and began painting, and that was really where my characters began to take life. With all of the excitement and new mediums, I just couldn’t stop drawing and painting, which inevitably led to me having my first art show and eventually gave name to my main character, Stink. 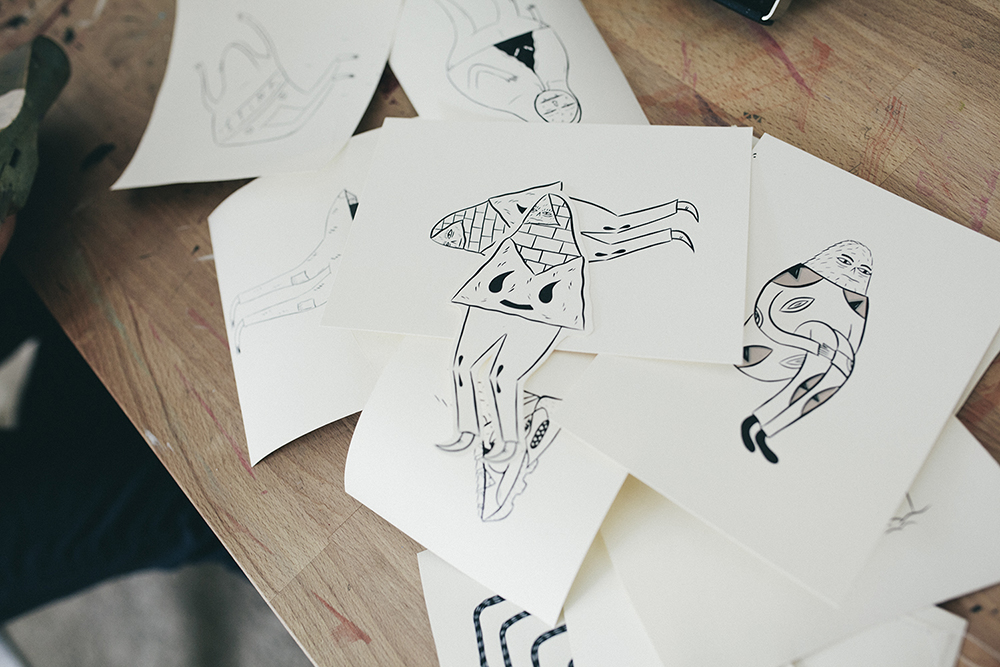 Who are the characters in your work? Are they supposed to represent you, or people you know?
Often in my work, you will see my characters doing fun things like skating, surfing, riding bikes, hanging with friends, or you will see them getting into trouble like spray painting and putting their crew name “Hairy Fools” on the city walls. It’s safe to say the characters represent myself, as “Stink,” and my friends, just doing what we do best: cruising, panting, surfing, skating and exploring. Sometimes though, when I paint my characters doing certain things, it’s almost a way of letting out the frustration that I am having at that moment. For example, when my character Stink is spray painting a wall, it means that in reality I wish I was doing that same thing, but instead, Stink gets to have all the fun! 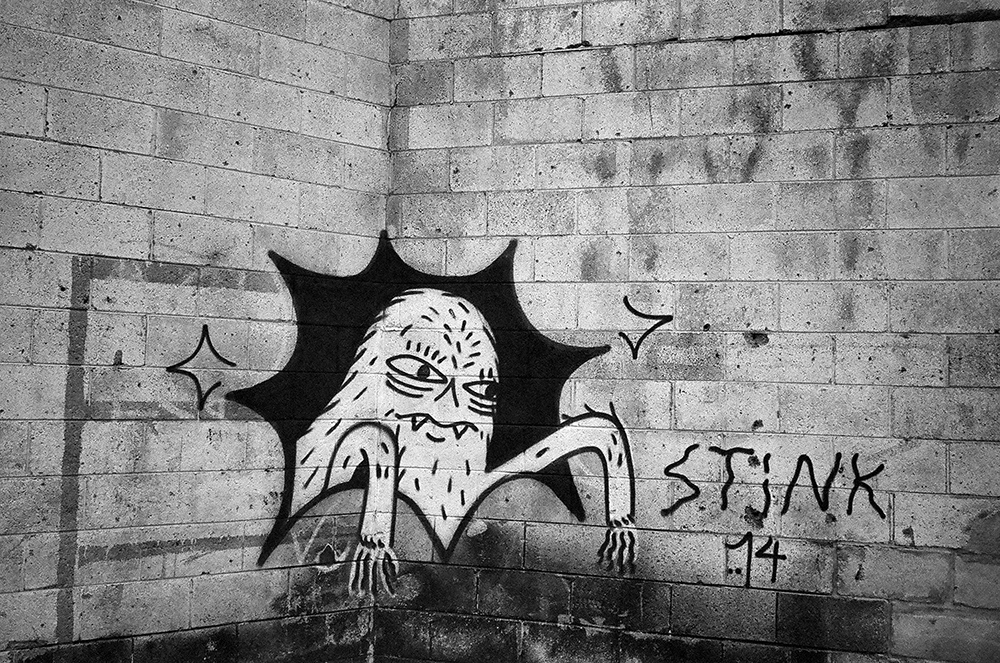 Can you tell me a little about your studio?
I enjoy working out of my house at the moment; it’s where I sleep, eat and create. Life as an artist is about convenience. Convenience just makes it that much easier to create, and also because I find myself taking a lot of little breaks throughout the day, so my room is just the perfect place for that. I could be painting all day and just decide to take some time to look at some old books/zines, or have a snack while listening to some records, or I can go outside and skate around for a bit. Doing these things just keeps me from burning out, you know? Plus, my room is a reflection of me and all of the things that I’m into at the moment so it’s a great space to stay inspired. A lot of my room’s décor, as well as my bedding, are thrifted. Each piece in my room has a cool story of its own and reminds me of all the fun places/vacations I’ve been on when I found them. My room is the smallest studio you could think of but it just works, and for now I’m happy with my space. But I do think in the future I would like to have a slightly bigger studio so I can store more surfboards, canvases, zines, and all my stuff. 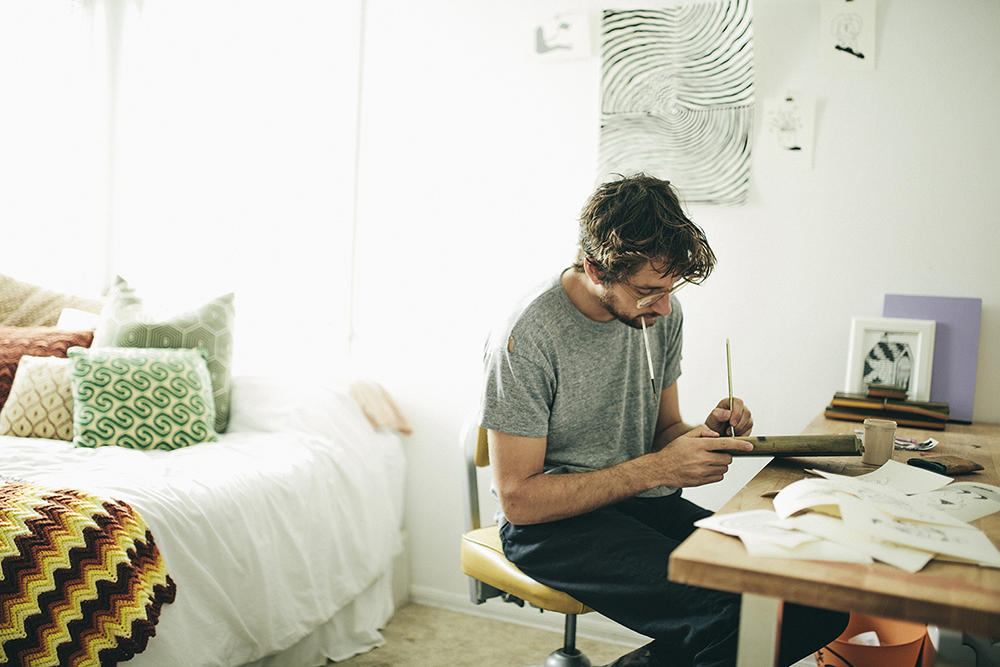 What things do you need to have in your studio at all times?
I need surfboards, skateboards, watercolor, spray paint, acrylic, a variety of paper and canvases, good brushes, a record player, a sewing machine, a computer, and all my vintage knickknacks. 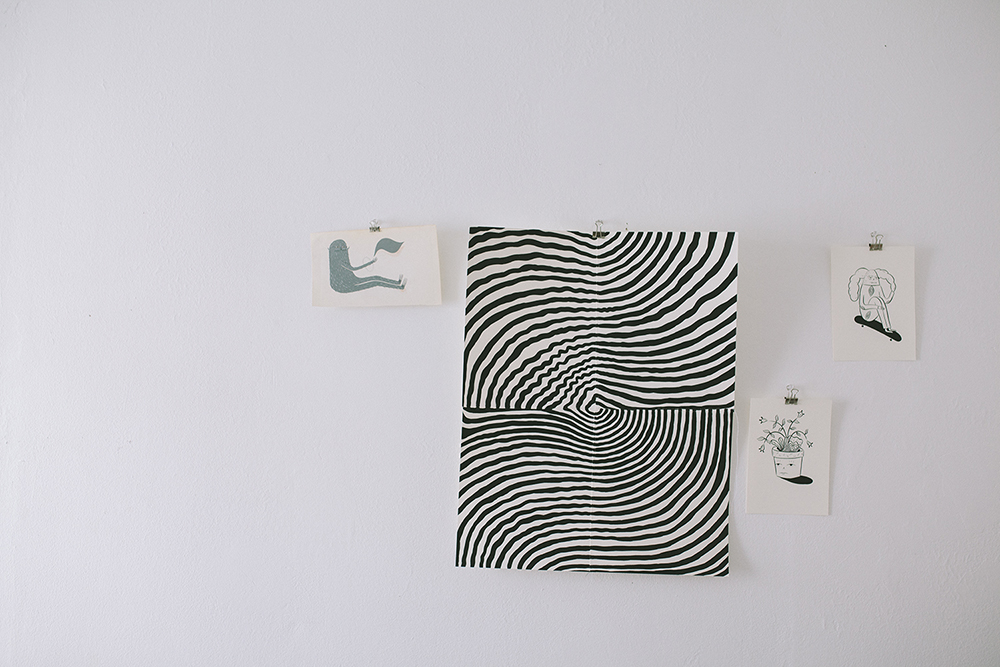 What kind of music do you listen to when you’re working?
I’m always changing what I’m listening to and I really have no preference. But for this week’s playlist: Yung Lean, Travis Scott, Herbie Mann, Ariana Grande, Freckles Band, Pia Mia, Nick Waterhouse, Devendra Barnhart, Allah Las, A$ap Ferg, and Young Thug. But my new thing is putting on Netflix and listening to a show I’m super into, a random movie, or stand-up comedy. 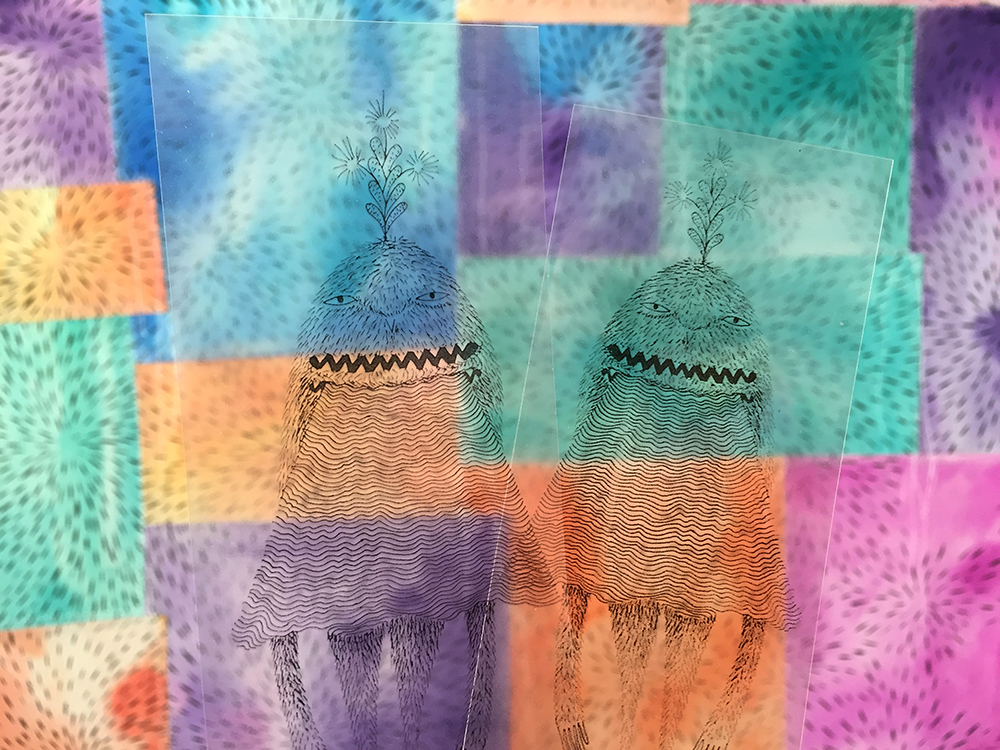 What do you have coming up? I noticed a painted skateboard deck on your instagram – are you planning on releasing a limited-edition deck?
I just released my own Signature Line of “Evan Rossell” beanies that feature my hairy watercolor pattern. I have some fun commercial and personal stuff coming up in 2015. I’m releasing a new zine in January, which I’m super excited about because I really haven’t released a zine in about a year. So go cop that!

I’ve also been doing a lot of commission work for collectors and that’s been really fun because a lot of the pieces have been on different mediums like skateboards and surfboards. Also, I have recently started selling originals in my online store, which is different from my usual T-shirt and zine selection.

If you could have anything you wanted for Christmas, what would it be?
A house in my name. Tasos Gaintatzis & Marina Legaki
Stefan Marx is an artist based in Hamburg, Germany. Stefan was educated by skate culture in his early teens, and is now the creator of a vast artistic universe, characterized by humorous line drawi... Tucker Gerrick
There’s a lot to say about a guy like Todd Bratrud. He’s a man of many qualities; ranging from quirky, brilliant, to reclusive and extremely driven. With being one of the most sought-after artists ... GET HIGH OFF WORK :: JAY HOWELL'S "COME DOWN EASY"

Mac
In a quest to find some reason to leave work (Ben scares me, and the media room smells like BO X Funyuns X taco-meat), I headed over to Jay Howell‘s new exhibition at Slow Culture. Yeah, the same S...
HIDE COMMENTS