Of all the intricate details that make up the fluorescent-colored anime characters of artist Eunpyon, it’s the sweat that stands out the most. Not their many layers of clothing and labels; not their numerous facial embellishments; not the dozens of accessories. It’s the sweat. “People always ask me why they’re always sweating,” she tells me from a frigidly air conditioned coffee shop in Metro Manila. “It’s because the Philippines is hot! If you want to look good, you gotta sacrifice your comfort.”

We’re sitting in a clean, bright shop tucked into one of the city’s many mega-malls, looking at the iPad Pro she creates her work on. The scene in this sterile oasis of commerce is a stark contrast from the crawling traffic and troubling poverty just outside its property, where the temperature has been averaging in the high ’90s this summer. 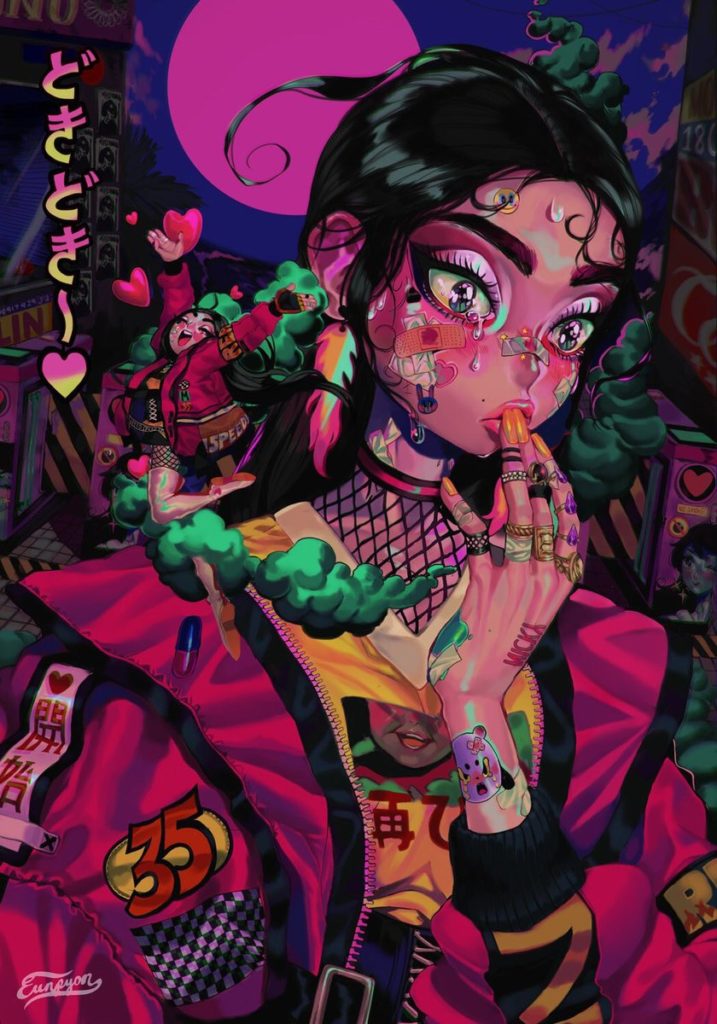 While Eunpyon—a 21 year old raised in Laguna, a province on the outskirts of Manila—is a high fashion and street style connoisseur, she recognizes this is a realm that’s unattainable for most of those in her country, where an average family makes $425 a month. So while the girls she illustrates are dripping in expensive couture culled from her Pinterest boards, she likes to place them in everyday settings. Characters adorned with rich clothing eat street food off a stick. A couple bathed in Gucci-inspired wares lounge in an abandoned mall. A student pauses in front of corrugated metal roofs. Despite the city’s troubles, she still finds beauty in the scenery and a warm feeling in knowing that it’s close to home. Pairing these sides together brings the disparate worlds closer and makes the clothing feel more accessible. She also feels the aesthetic contrast is exciting: “I like the contrast between brand new and expensive with low budget. It creates more visual interest and a richer narrative. Like light and dark. It almost makes it feel achievable.”

An image inspired by a spot right outside her school is arguably her most powerful one yet. Not only is it one of her most detailed pieces, which often border on the baroque with their intricacies, it also elevates Manila to the level of a character in itself. The girl in the image shields her books from the profuse sweat, while jumbled stacks of informal housing foreground towering condos in the distance. It’s a sight that captures many of the highs and lows of the mega city in one place.

Eunpyon’s campus at the De La Salle College of Saint Benilde is a waving piece of starchitecture designed by Ed Calma, which climbs through the haze like a jagged stream of metallic data. Artsy students file in and out all day, weaving through the congested street out front. A newly opened wing features a tall glass wall with seating pods, where students can see out over the nearby stream depicted in the painting. Informal housing balances precariously on stilts over the brackish water (in the world’s densest city, even waterways are fair game for housing). 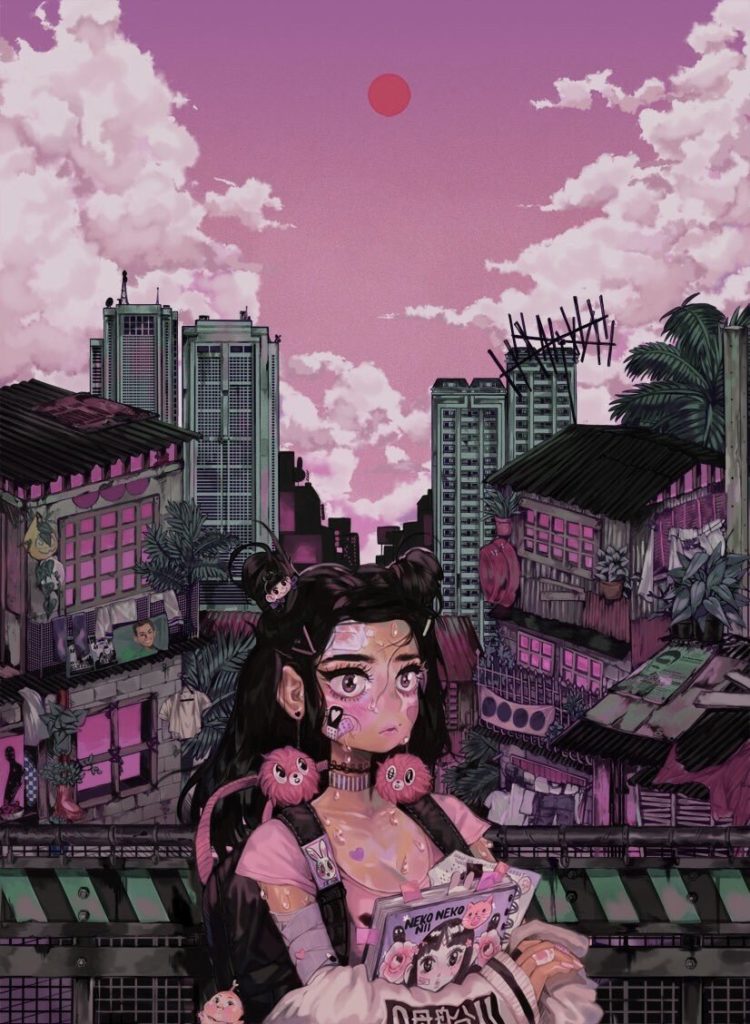 In her painting, the houses are covered in campaign flyers. “It depicts how strong the political influence is, where even something as precious as your home, the campaign posters cover it,” she explains. The local elections had actually just passed, and there were indeed flyers everywhere. The campaigns are intensely local, covering districts that can be as small as a four block radius. Side streets are still swathed with the faces of candidates, on flyers ranging from professional, full color vinyl ads, to black and white photocopied pieces of wheatpasted paper. 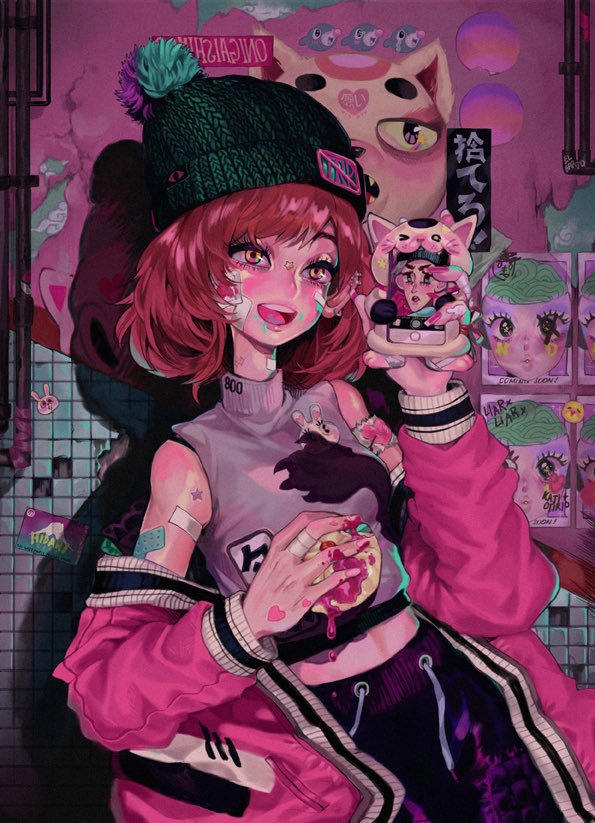 Her style resembles a water color painting, and while she did start sketching in color with that medium, she didn’t intend for the similarities to follow into her digital work. But the goal is to look organic. While she sometimes she sketches in pencil first, her work is entirely digital otherwise. These days, she’s been drawing on the iPad, but she began with a Wacom tablet, so she’s teaching herself this new tool. While some of her pieces have intricate backgrounds, she always begins with the characters first, following a stream of consciousness until she feels they are full enough of life to be finished. There might not be complete labels on her character’s clothes, but they are often inspired by real pieces; she just would like to avoid the possibility of getting sued. 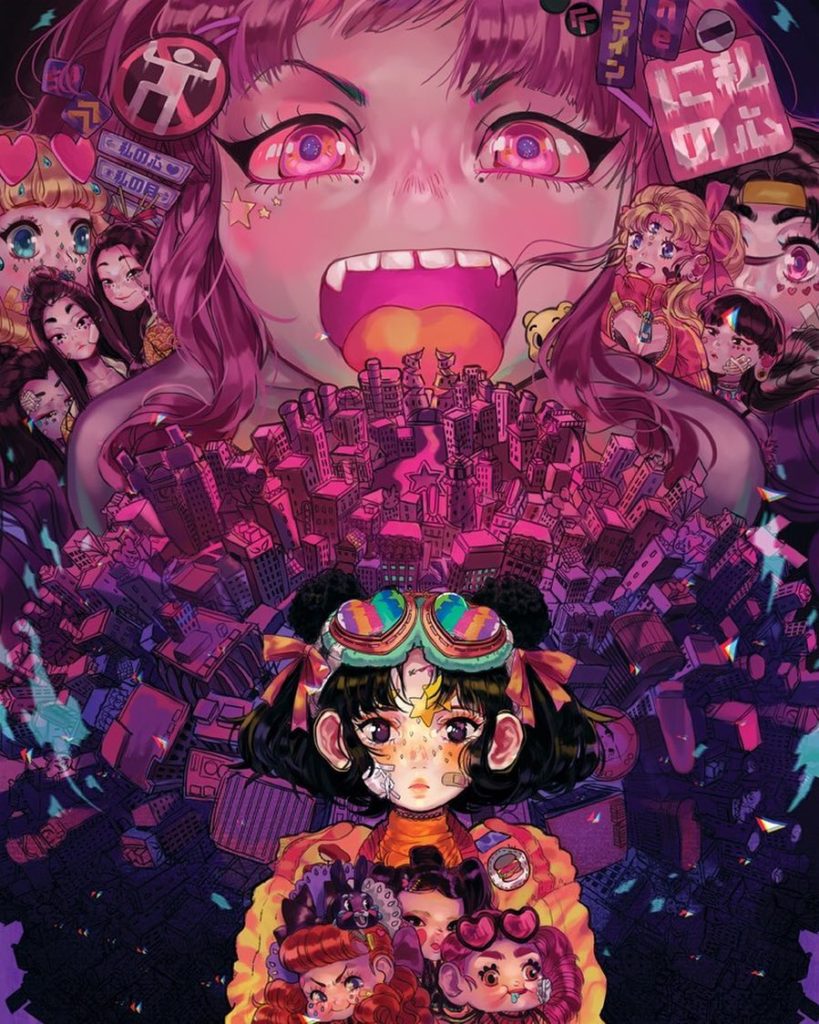 Fashion is integral to Eunpyon’s work. It’s always been a part of her creative life, and it’s inseparable from her artwork. But she’s very thoughtful about it, considering ways it could be more egalitarian. This is a city where bootleg Nike and Supreme is sold everywhere from street corners to highway overpasses—old ladies and construction workers wear it. She sympathizes with the need for affordable, stylish clothes, but wrestles with the need to give designers their rightful due. “A lot of people dis fast fashion, and I know it’s not good for the environment and everything, but how do you get clothes?” she muses. “I think the best way we do it is by going to thrift shops and supporting indie brands, people who sew with heart.” The Art of Fighting :: An Interview with Artist & Illustrator Gian Galang

Mike Steyels
With aggressive brushstrokes, hardened textures like weathered rock, and stark monotone colors, Gian Galang has developed the perfect style to portray a world of violence and physicality. From ulti... These Photos Offer a Vibrant Peek Into Cuban Street Life

Mike Steyels
"The aging grain of their film is a character itself, drawing out the feel of an island living within a time capsule." Alex and Rebecca Norris Webb's photos of Cuba are now on exhibit in Miami.
HIDE COMMENTS