In honor of Duckwrth blessing the Spitset stage this Friday, October 21st, we’re revisiting our interview with the young talent, published previously on The Hundreds blog in September prior to the drop of his critically acclaimed I’m Uugly project. RSVP for Friday’s Spitset at thehundreds.com/spitset. All free everything, 21+ only.

When I arrive at photographer Graham Walzer’s Highland Park home to meet Jared Lee, he’s fiddling with his iPod in a patch of sunlight in the backyard. He removes a chain adorned with colorful block letters that spell D-U-C-K-W-R-T-H, his musical moniker and his mother’s maiden name (he removed the “O” for reasons of “visual hierarchy”) and shakes my hand. I’m immediately taken with his energy—he’s constantly moving, as though existing itself is an art in which he must constantly create. When I ask his age, he makes me guess, and I guess correctly—28 (I sense a proximity to Saturn’s Return, particularly when he tells me the events preceding his upcoming album). As I’m a parody of myself, I follow-up by asking his astrological sign. He’s a Taurus, but relates more strongly to his Chinese zodiac—1988, Year of the Dragon. I ask what resonates.

“We’re lucky motherfuckers, one,” he says. “Very involved in our image.” He runs his hands along his arms, then spreads them widely. “Our scales have to be shiny.” 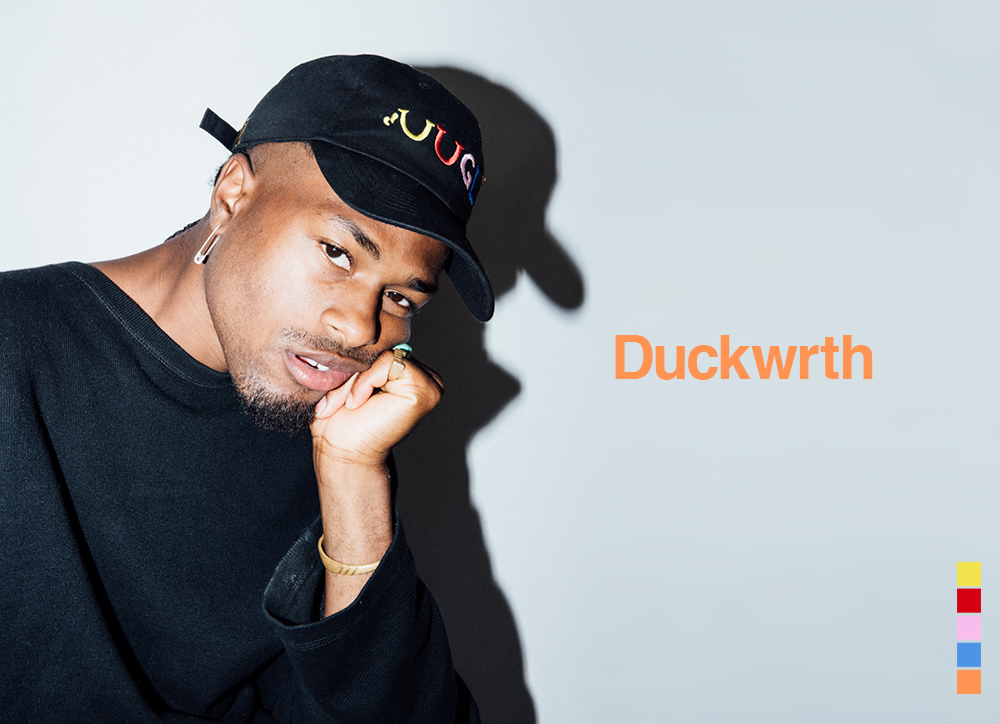 Accordingly, throughout our afternoon together, Duckwrth cites specific fashion shows—“Chanel Spring 2016”; “Yves St. Laurent Fall 2014”—as though he works at Vogue. He wears leopard print pants adorned with handmade patches, held up with a purple leopard print belt. His primary style inspirations are skate culture and 1950s-era rockabilly—his shiny scales are melded from a variety of influences. Pink is his favorite color at the moment: “I feel like it would taste good.” I’m not surprised to learn that Duckwrth has synesthesia, the neurological condition where the stimulation of one sensory pathway (like sound) leads to an automatic experience in a second sensory pathway (like sight)—put simply, he “hears colors.” His upcoming album I’m Uugly, he tells me, is very “cool colors”—blues, purples, and pinks, with the occasional splash of orange.

“My dragon comes out when I perform,” Duckwrth tells me, but I see it right now. In fact, I see his dragon the entire time I spend with him, particularly when he moves his arms in a sinuous wave, as he does frequently in the “Get Uugly” video. As Graham, Duckwrth, and I walk around Highland Park to take photographs for this article, Duckwrth is constantly moving his body in ways that make interesting lines in space (he later tells me he gets his best ideas while moving—walking or skating: “I will thrash some shit”). We walk by a donut shop and he buys two, which he appears to choose primarily for their appearance (and the fact that they’re available sans gluten—he’s intolerant). He eats them quickly in between striking poses in front of a red brick wall. After the donut shots, he insists on having Graham photograph him jumping. His energy is kinetic, spontaneous—a fire breathing dragon.

Duckwrth’s ways of movement remind me of his music, which KQED called “ethereal, yet tenacious.” In the car on the way back to South Central, where Jared grew up and moved back in January, Duckwrth plays me everything from hardcore ‘80s punk group Bad Brains, to post-minimalist composer John Adams, to his own music. I’m thrilled that when I ask what’s on his current rotation, Duckwrth names himself (I almost always ask artists whether they blast their own music—lord knows I would—and Duckwrth is the first to answer unapologetically in the affirmative). 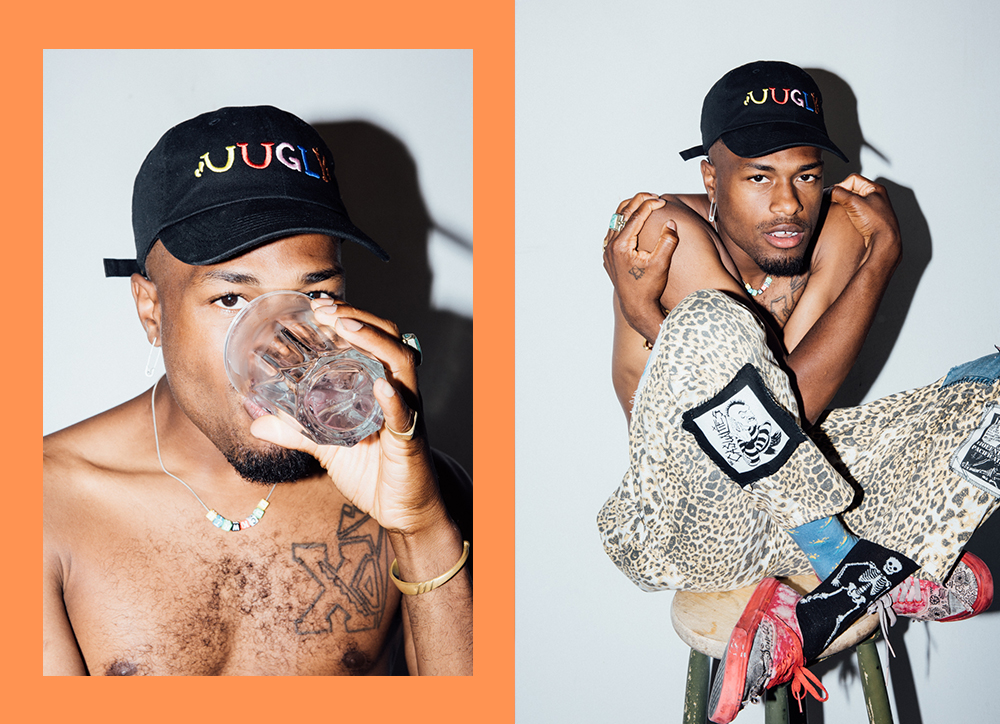 Duckwrth is pretty high on himself at the moment, but it hasn’t always been that way. The name for his upcoming album derives from the fact that he was an in an ugly place when he made it. He was originally working on an album called Supergood—a radiant and vibrant project to oppose all the dark events currently happening. But the songs weren’t coming together. He iced a crowd. He was having trouble financially. He would catch the bus to record sessions at Paramount; get out of the sessions and it was back to real life. He decided to refocus his work and “the visual scape of ugliness took off.” In particular, he committed to accepting himself—all of himself. He told Be Street: “Acceptance of flaws, acceptance of downfalls. [E]verything wasn’t really working out for it, and at one point I said out loud ‘man shit’s just really UGLY right now!”

The project is still uplifting, he assures me, but the language is tweaked to cater to the times. “The language of today is a bit more on the sad side,” meaning “I can’t be all hype—I’m not Pharrell.” But Pharrell certainly comes to mind, particularly in my favorite track “Rare Panther/Beachhouse,” which melds Skateboard P’s vivid wordplay with Frank Ocean’s indulgent croon. Anderson .Paak, who Duckwrth met while recording with Honolulu-based producer Carmack and later toured with, also comes to mind, sharing what NPR called .Paak’s “kaleidoscopic mix of influences.” The finally conjures the vivacious energy of Andre 3000, whose melodic flow I believe Duckwrth most mimics. When I convey this, he smiles widely, explaining that Outkast is a major influence and he “would like to continue that lineage.”

“I’m portraying the character that I’m supposed to be from the perspective of the people who say, aren’t you well spoken[?], it’s like playing a duality role, it’s trippy.” -Duckwrth to JuvieMag on the meaning behind the “Well Spoken” video.

While Duckwrth’s sound, like his style, borrows from a variety of inspirations, he also has that sui generis quality inherent to all great artists. Raised in a Pentecostal home, Duckwrth’s childhood was very sheltered—he was unaware of music outside of classical, jazz, and reggae until he was a teen. “I really just created my own little world when I was young,” he told KQED, “and I never left.” He also attributes his unique point of view to his ten years in the Bay Area, where he studied graphic design (he still designs logos and branding for other artists) and afterwards helped found an art collective called “Them Hellas.” Unlike LA, he explains, the ultimate goal in the Bay is not to be a celebrity, which “makes creation pure.” 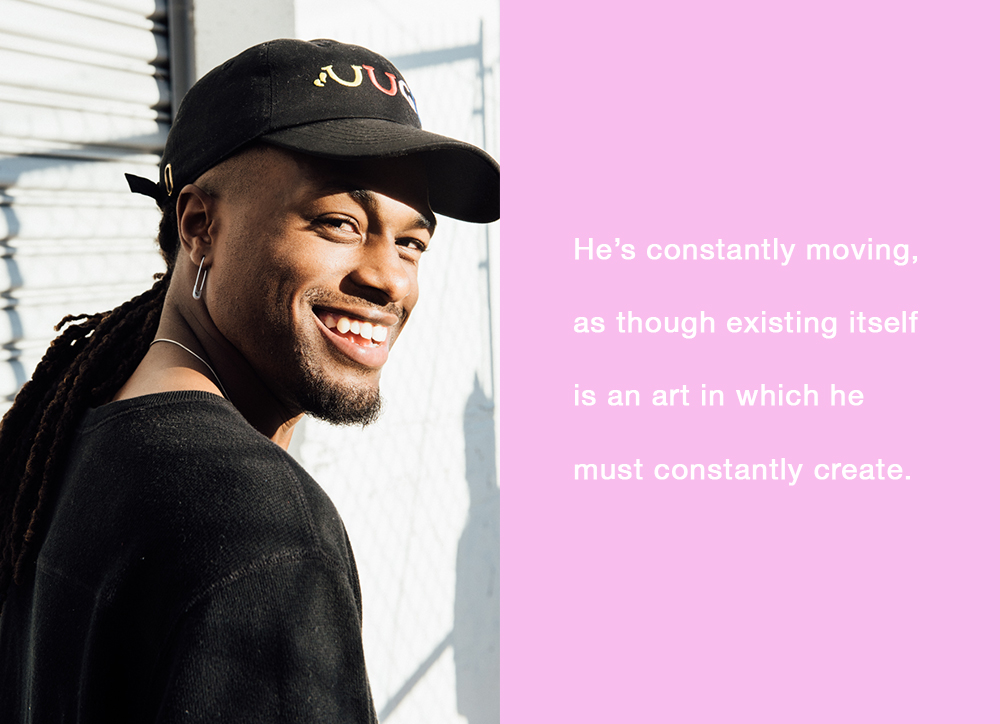 That said, Duckwrth is not opposed to immense fame. I ask him if he has a dream record label and he says Republic. I ask who is on that.

“Rihanna,” he says matter-of-factly. [Rihanna is actually on Roc Nation]

But Duckwrth’s not interested in fame for fame’s sake, he tells me, but rather only insofar as “to influence culture.” His message is one of positive energy and self-care. “The best thing you can do for yourself,” he told The Come Up Show, “is to love and accept yourself.”

I’m Uugly is out now on iTunes. You NEED to Listen to Duckwrth's 'I'm Uugly' Album, We're Not Joking

Kat Thompson
"It's a rarity for me to hear something and suddenly feel so moved, overwhelmed, and compelled to write in praise of it." Our Editorial Assistant Kat's experience listening to Duckwrth's gamechangi... The Hundreds Staff
From “creepy classical ballads” his dad played him to a Jimi Hendrix song that gives him a flashback high every time he hears it, rapper/singer DUCKWRTH lists 5 songs that most influenced him.