Ayo Virtual Reality :: Is VR for Video Game Systems the Next Big Thing?

Chances are that when you step foot inside any retail location these days, you’ll be greeted by the common sight of dozens of people peering down at their mobile devices with their necks and heads contorted so that they look like a draught beer tap. Whether people are texting, surfing the Internet, playing a mobile game, or pulling up an app to pay with, life today is lived bouncing between one’s device and the task at hand.

Although devices like the Apple Watch have curbed this to some extent, there’s absolutely no indication that we’re moving away from our technological immersion. In fact, the rise in popularity of augmented reality games like Pokémon Go suggests that our virtual world and real lives are one day going to be one in the same. 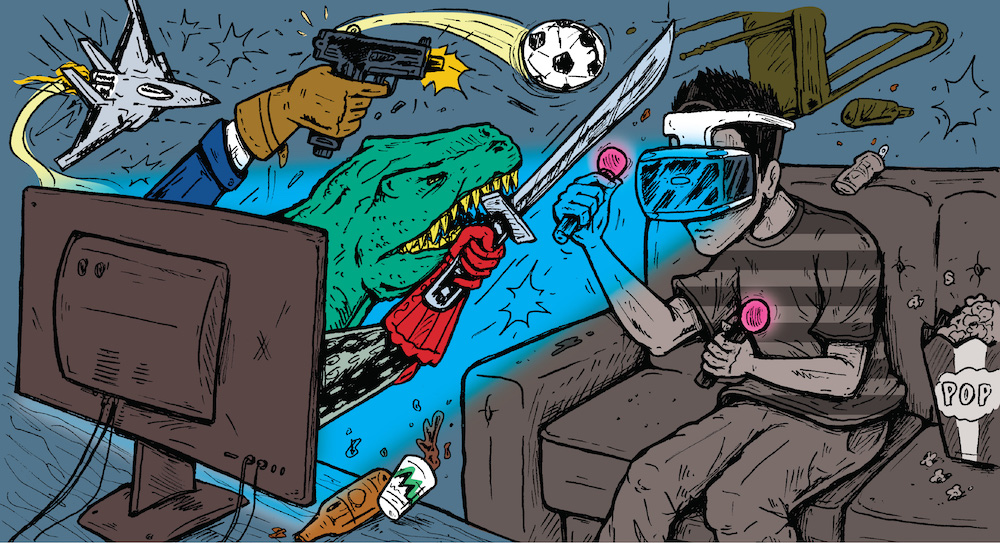 Despite our propensity for mobile enthrallment, we still haven’t gotten to a point where we’ve gone full cyborg – complete with items and gadgets that will make us all appear like Johnny 5 from Short Circuit. But that day could be fast approaching thanks to the introduction of virtual reality headsets into the marketplace.

2016 will prove to be the year that the likes of Oculus Rift, PlayStation VR, Samsung Gear VR and the HTC Vive will have taken the medium mainstream.

Like many first generation products, the videogame realm will prove if something is a fad or not – like the Power Glove, Toyo Stick, Nintendo’s Virtual Boy and Sega’s Master System 3D glasses which appeared in the ‘80s as a flickering headset that recreated the effect of 3D in a private setting.

Research firm, SuperData, has predicted that virtual reality devices are going to account for $3.6 billion USD in revenue in 2016 alone based on projections that consumers will purchase 16.8 million mobile VR devices.

Yet, many are still skeptical – both for their relevance and their look on people’s faces.

“New rule, stop trying to make this [VR] a thing, said Bill Maher in March of this year. “Nintendo tried it, and NASA. And this loser and these schmucks and this asshole. It’s like Marco Rubio. If it was going to catch on, it would have by now. And besides, there’s a much cheaper device to place on your head to escape reality,” he said, referencing a beer helmet you’d see at a frat party or at a football tailgate.

If Bill Maher is the naysayer, than Facebook’s Mark Zuckerberg is on the opposite side of the coin. In 2014, he purchased Oculus for over $2 billion USD and provided “validation” for others considering making investments in the space.

“We’re going to focus on helping Oculus build out their product and develop partnerships to support more games. Oculus will continue operating independently within Facebook to achieve this,” Zuckerberg said at the time.

Oculus has since grown from 75 employees at the time of the acquisition to more than 400 today.

“Facebook got everybody else off their ass,” said Octavio Herrera, co-founder of Lucid Sight, a startup building VR games. “It’s not a coincidence that HTC’s product is awesome. That Sony’s product is awesome. You can’t be lazy when there’s serious competition from Facebook. It raises all ships.”

“Virtual reality is the next innovation from PlayStation that will [shape] the future of games,” said Sony Computer Entertainment Worldwide Studios President, Shuhei  Yoshida.

Since the Oculus deal was announced, the number of venture capital deals and total dollars invested in VR and augmented reality have both tripled, according to CB Insights. Last quarter, investors made 42 VR and AR investments totaling nearly $240 million USD. There were just 37 VR/AR investment deals made in the year prior to Oculus’ deal with Facebook.

But it still begs the question, is VR going to be the future of gaming, an extension, or something that falls in the middle? Because not every guy or girl who enjoys picking up a controller and beating someone at Madden or Gears of War is going to be comfortable with going “full geek.” I’d liken the choice of VR to Robert Downey Jr’s advice to Ben Stiller in Tropic Thunder regarding acting. It’s never good to go “full anything.”

Sony benefits from the fact that more than 35 million people already own a PlayStation 4, the device necessary to run the headset.

WIRED’s initial test run of what is now simply referred to as “Playstation VR,” notes, “the $399 PSVR is the first of an emerging ‘middle class’ of virtual reality: in both price and performance, it splits the difference between high-end, PC-driven headsets like the Oculus Rift and HTC Vive, and mobile solutions like the Samsung Gear VR and Google’s new Daydream View. More importantly, the PlayStation 4 game console that it connects to has sold more than 40 million units worldwide. That’s an enormous opportunity: If even a fraction of those 40 million homes bring PSVR into their living rooms, Sony will win the hardware wars of the first generation of consumer VR—and win handily.”

I believe that if people are willing to strap devices to their faces, they want the best. Thus, Breaking Bad-enthusiasts will view things like Google Cardboard and Samsung Gear VR as cheap “half measures” – despite the fact that both platforms work with both Android and iOS devices, and there’s a lot of content available.

In a separate exploration of VR possibilities, WIRED noted the “cheap” connotations, saying, “imagine the VR experience of Cardboard and Gear VR as being seated in a swivel chair that’s rooted to the ground—you can look up, down, and around you in every direction, but you can’t move around in 3D space.

That’s the reason why some people are shying away from calling the 360-degree experiences on Gear and Cardboard ‘VR.’ They’re reserving that moniker for the near-term future.”

Sony’s main rival in the gaming space, Microsoft, currently has an agreement with Facebook’s Oculus VR to provide Xbox One game controllers with each Oculus Rift headset, and to let Rift owners stream their Xbox games to a virtual living room.

“Would we ever do our own VR device? We could, if we thought we had something unique to add,” Phil Spencer, head of Microsoft’s Xbox division, said in a February 25 interview. “I don’t think the unique add is to plug into the Xbox One console. That’s not the magic unlock to me.”

Instead, Microsoft is focusing on something more akin to the aforementioned phenomenon, Pokémon Go, with their “HoloLens” which lets users interact with computer generated objects that appear to exist in the real world thanks to a pair of transparent waveguides instead of at a display.

While Google, Samsung, Oculus and Playstation have all entered the fray, there are still mysterious projects and entities that could prove to continue to reshape the marketplace. Magic Leap, a mysterious startup, has secured $800 million USD in funding and seems to think that Microsoft’s HoloLens is truly the wave of the future. Conversely, the Avegant Glyph headset seems to think all consumers need is more of their cell phones – albeit correcting the aforementioned “cell phone hunch” by presenting a pair of over-ear headphones which you can tilt over one’s eyes to let people watch video from their phone while it’s tethered to it.

The biggest problem with VR right now is that the technology aspect may have actually eclipsed the entertainment people will be able to enjoy while wearing the headsets.

“The dirty little secret about VR is that the hardware has run ahead of the content,” says René Pinnell, head of Kaleidoscope VR, a production studio that hosts an international VR film festival.

As the Wall Street Journal notes, this is a not an uncommon problem for new products that will eventually revolutionize the marketplace.

“We have seen this before,” the Journal stated. “Look at the early days of television. RCA, which pioneered the technology, created NBC, the first national broadcast television network. RCA couldn’t sell its televisions without content, and the content couldn’t be delivered without RCA’s devices, so RCA did both.”

Thus, the makers of the VR technology are being urged to deliver from soup to nuts. In June 2015, Facebook pledged $10 million to fund virtual-reality games. In April 2016, HTC promised $100 million to an “accelerator” program to create VR content and software.

This year there are some notable games being released should you want to ride the VR wave from the very first moments. Standouts include 100ft Robot Golf which is billed as a combination between a fighting game and a golf game, which sees players control giant robots as they play golf and destroy cities. Edge of Nowhere is a third-person adventure game in the vein of Uncharted and Tomb Raider which is an Oculus Rift exclusive.  EVE: Valkyrie combines the expansiveness of space with dogfighting. Finally, according to Game Rant, “Oculus is counting on Lucky’s Tale to be to the Oculus Rift as Super Mario Bros. was to the NES [because] it comes packed-in with every Oculus Rift headset.

John Riccitiello, CEO of Unity, a company that provides tools that help developers make apps and games, believes in both the pros and cons of VR – perhaps the best embodiment of the technology at this precise moment.

“While I believe a lot of folks are working on the next killer app, that app is not there,” he said, adding, “It’s a once-in-a-generation technology that’s so compelling it literally changes everything.”

As the saying goes, “seeing is believing.” But it remains to be seen how we want to view the future.