I am a huge fan of Brett Flanigan for more than just his art. If I was going to trust anyone to show up on time for a project and be responsible, to always keep their cool while I’m freaking out, or to make something out of nothing, it’s Brett. Even when he broke his ankle skateboarding mid-way through constructing a large-scale sculpture, he still maintained his cool and focused on what he needed to do to get the project done.

During a rainy stretch of days where we couldn’t work on the sculpture, he last minute headed over to Reno, Nevada, to paint two murals inside the entrances of their University’s Fine Arts Building, returning just a few days later to finish the plaza piece. This all went down with a freshly broken ankle.

He is mysterious yet upfront; hard to explain. There are definitely intriguing paradoxes present in who he is and it certainly translates to his work. It’s familiar, but different. Composed, but loose. Simple compositions with complex details. It’s an orderly chaos—but with a method to the madness. His disposition is so calm, yet his work is so energetic and vibrant. Without any further ado, meet my friend Brett. 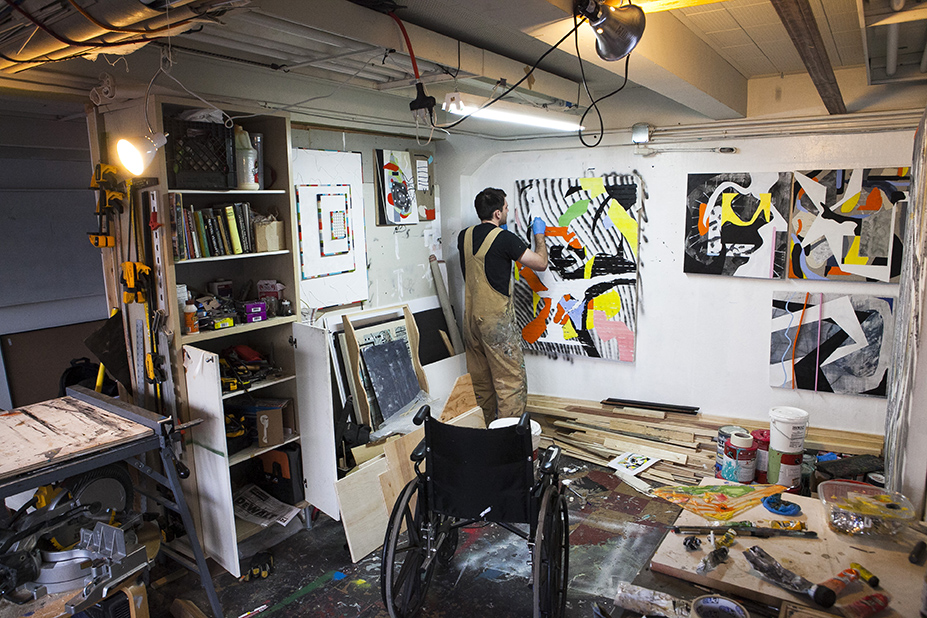 BROCK BRAKE: What are the things you’re abstracting in your paintings? Landscapes, music, portraits, feelings, or are they something less literal?
BRETT FLANIGAN: Right now, I’m not really interested in representing any thing that already exists visually. Rather than a depiction, it’s more of a decision making process based on what sort of thoughts are running through my mind on a given day.

Do you have any kind of formal art education?
Not in the institutional sense. I read a lot, I go to lectures. I make it a point to continue to learn as much as I can without taking on the debt that accompanies a traditional American art education. I get excited when I hear about projects like the new Black Mountain School, that are more fluid and less profit-based. I like to be in a critical environment too, so I try to find that among artists that I respect. It can be so easy to surround yourself with sycophants, especially on the internet. 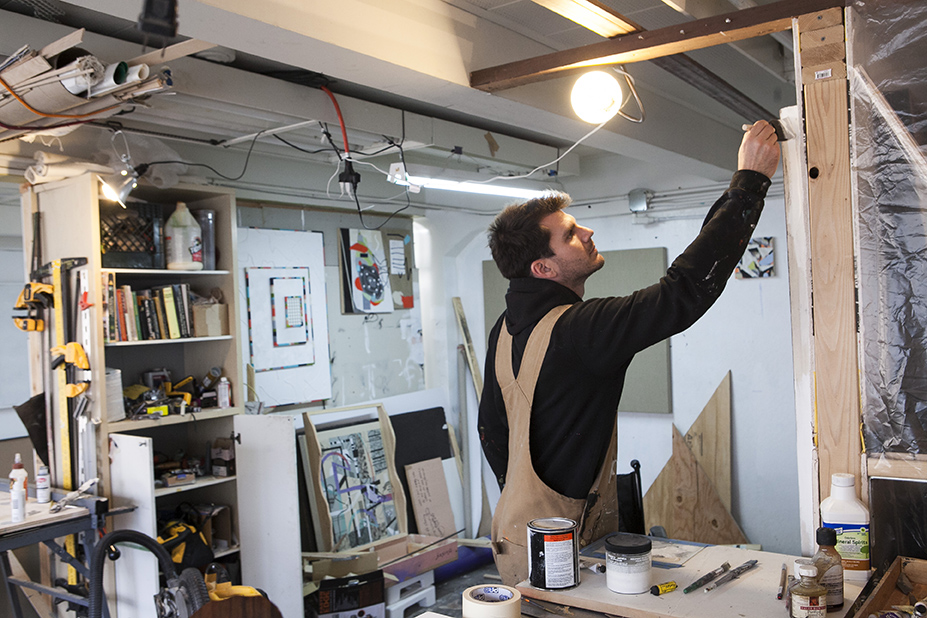 How would you explain your creative process?
I think my most successful work is made without having any sort of plan, aside from choosing the materials that I’ll be using. I make a move and see what direction that pushes me in. The time I spend thinking about the next move usually increases exponentially as the piece progresses. I don’t try to fix my mistakes anymore. I just embrace them and use them to see how they affect my decision making on the next moves. 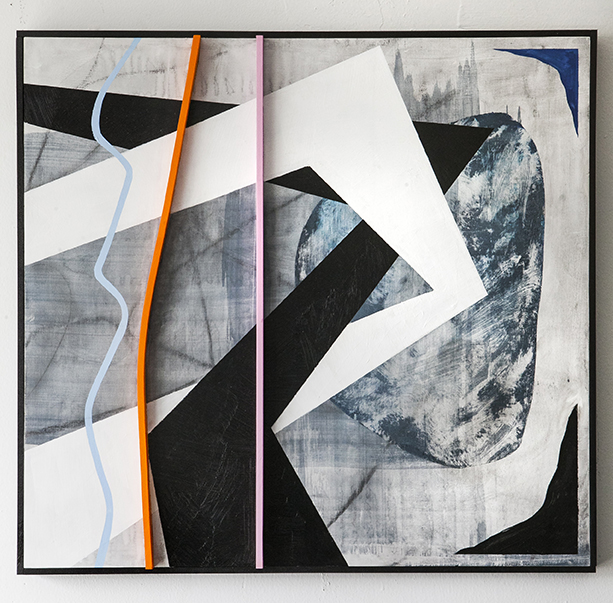 How do you feel about texture and color in your work?
They can both be very powerful tools when used in the right way. Over the past year or so, I have actively been changing the way I utilize both. I think that the urge to put a larger emphasis on texture in more recent work can be attributed directly to viewing so much artwork on a screen. When I finally see the work in person, there is a desire for it to be something more—for it to be tactile and to have subtleties that can’t be communicated through a tiny digital photograph. I want my artwork to be seen in person. I’ve been having a lot of fun lately getting more sculptural with painting and experimenting with different materials in order to create unique textures.

“I want my artwork to be seen in person.”

I’ve known you to hop a ride on a train or two over the past handful of years. How did you get into all of that?
There was a paper factory near where I used to live that always had a nice line of boxcars nearby. My brother and I used to go there on Sundays to walk the line and check out the oil bar monikers and do some drawings of our own. If you spend enough time hanging around trains, it’s only a matter of time until you realize these things move around the entire continent and you can too.

Can you explain the freedom that must come with such an epic ride?
It is a complicated feeling that I wouldn’t necessarily call freedom, being that you are totally at the mercy of the snake, with no assurance of where you are actually going or when you will get there. Although it is freeing to totally give up control and let fate work its magic. I think it is interesting that some people will use sleep deprivation, auditory driving, fasting, social isolation, etc. to induce altered states of consciousness. That sort of sums up riding trains for me. It can be meditative. Once I’m on, I don’t really try to do anything to pass the time, I just exist. You can really get to know yourself. 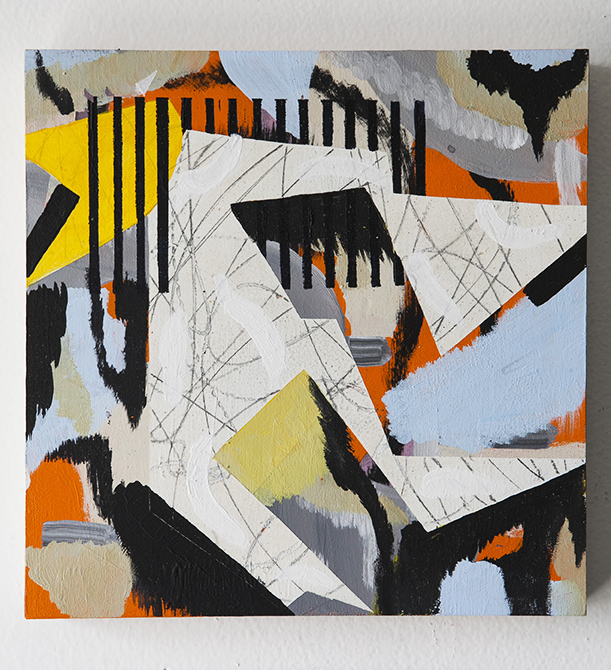 How would you compare the SF and Oakland art communities?
I don’t really draw a line between the two any more. I think they both have something that is necessary for the Bay Area art scene as a whole to function. At this point, most of the working artists I know can’t afford the current San Francisco rent prices, so pretty much everyone is working in the East Bay now. Both cities are changing rapidly and constantly in flux. They’re so easily accessible that I don’t need to choose one over the other. We’re lucky to have two very different major cities right next to each other. 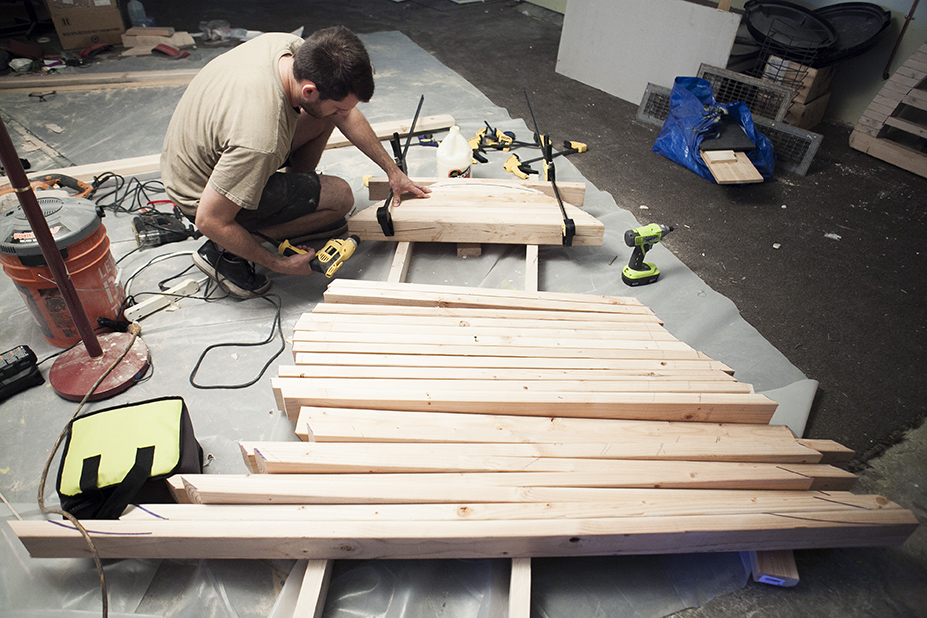 You were recently selected to work with Athen B. Gallery as a part of their Artist Initiative project with VSCO in Downtown Oakland. How did that come about and what was that whole experience like?
I had been thinking about large scale sculpture a lot so after being selected to receive the grant, we checked out this unused plaza area a few blocks from the gallery. The grant was originally intended to fund a mural, but I ended up pitching the idea of doing a sort of art plaza in that space, with a sculptural piece at the center but also including a ground painting and a mural on the surrounding walls.

“It was one of the most trying experiences of my life.”

I feel like public sculpture is rarely something that a younger/emerging artist gets the opportunity to do, so I was really excited when the project got approved. Right before we were set to start installing, I broke my ankle pretty badly and had to get surgery. I couldn’t postpone the project so I ended up putting in a solid 6 weeks of being at the plaza site every day, casted up and on painkillers, either in my wheelchair, or just sliding around on the ground (“slug mode”), trying to finish the sculpture as well as the paintings on the ground and the wall. I ended up doing most of the ground painting with a long stick while rolling around in my wheelchair.

Luckily, I have a super supportive group of friends who donated so much time and energy to come out and help me every day. It was one of the most trying experiences of my life. 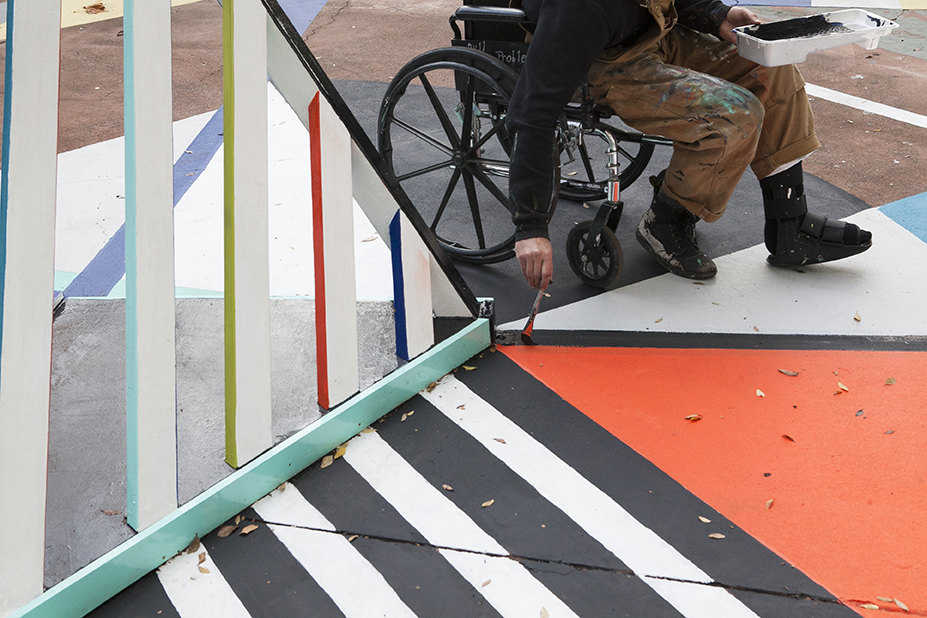 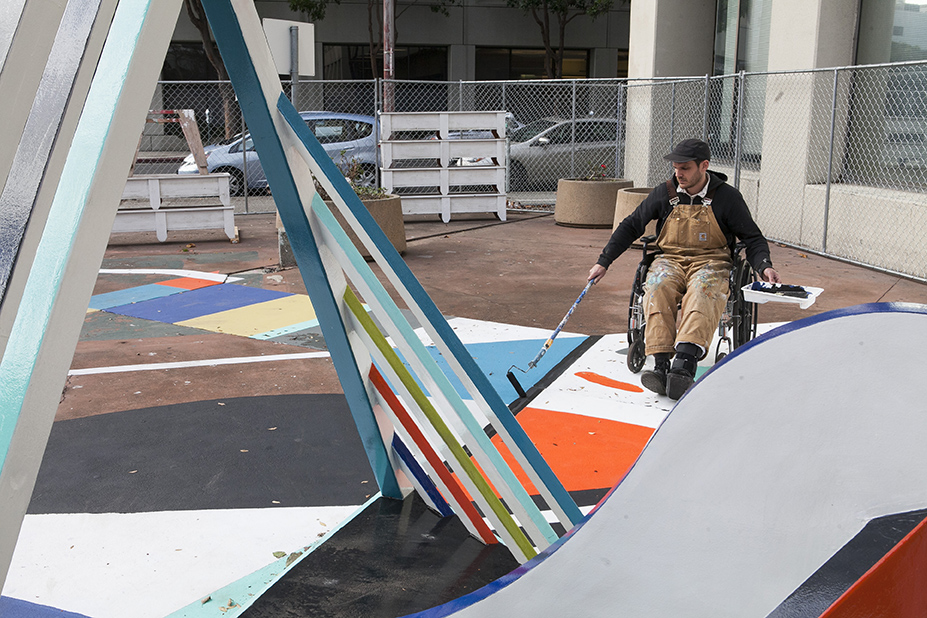 The studios you’re in have been bustling with people preparing for various exhibitions (including yourself) and a handful of traveling artists. How does that kind of environment affect the work you’re making? Does it make it busier, more chaotic?
No, it doesn’t directly affect the work I am making like that. It does get me excited to be in the studio though. It’s much easier to put in a 12 hour day at the studio when a bunch of your best friends are there doing the same thing.

What’s up next for Brett Flanigan?
I’ve been working on gallery shows consistently for the past few years, so right now I am taking a bit of time off from showing so I can take more risks and get loose and experimental with my next body of work. I am also beginning to work towards another public sculpture project that I am really excited about. 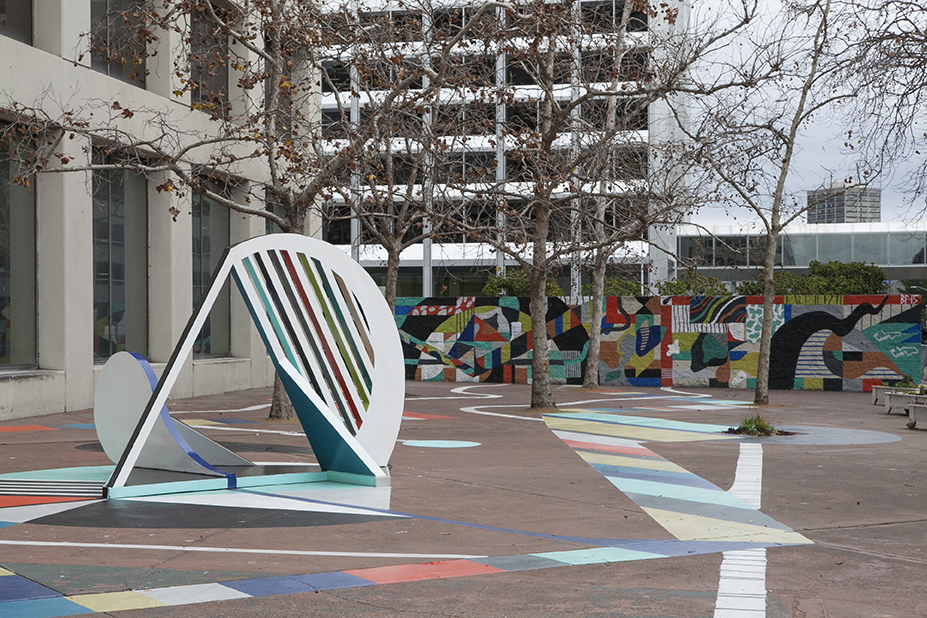