A Performance by the Drepung Gomang Monks

Last Sunday, I had the amazing opportunity to attend a performance by the Drepung Gomang Monks.

If you are not familiar with the term “Monk,” or Buddhism in general, it is a religion practiced in the Far East that has slowly made its way (with adaptations) to Western culture. A monk is a person who practices religious exercise, either to dedicate his life to serve all other living beings or to leave modern societies and live a life of contemplation. 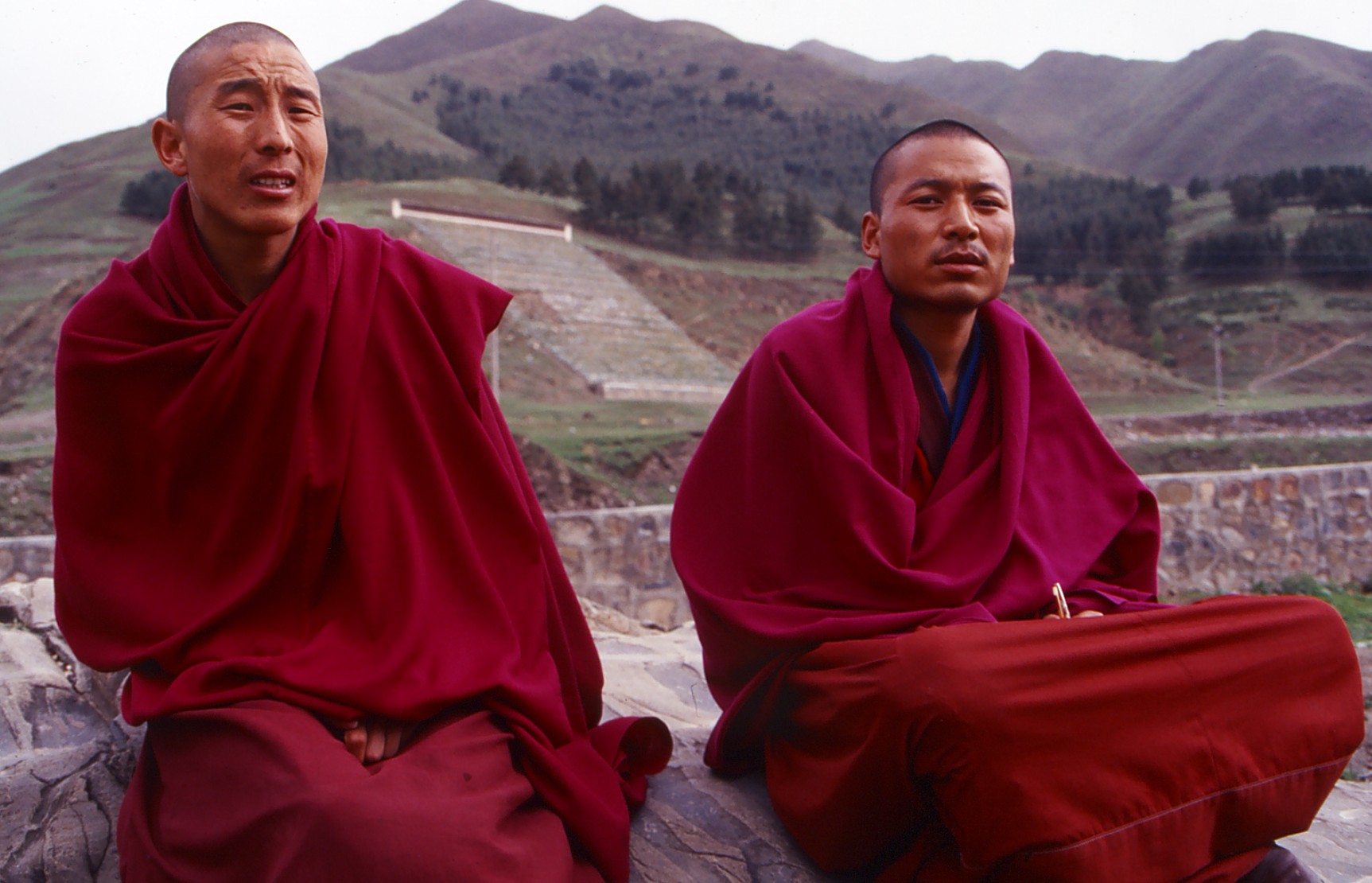 Spiritual in my beliefs, I like to dabble in understanding all of the world’s religions. Having a huge affinity for Asian culture since I was young, I was introduced to the practices and teachings of Buddhism when I was in high school, thanks to my big brother.

There are many kinds Buddhism, which vary in their approach and key points. Tibetan Buddhism is practiced in countries such as Tibet, India, Mongolia, Nepal, etc. It is placed under the Mahayana branch (the other main branch being Theravada), referring to the path of seeking complete enlightenment for the benefit of all sentient beings. Some main concepts of Tibetan Buddhism include ideas of impermanence, karma and rebirth.

His Holiness, The Dalai Lama, is the head of the dominant school of Tibetan Buddhism. In 1959, the Dalai Lama willingly left Tibet as part of the uprising against the communist country, China. 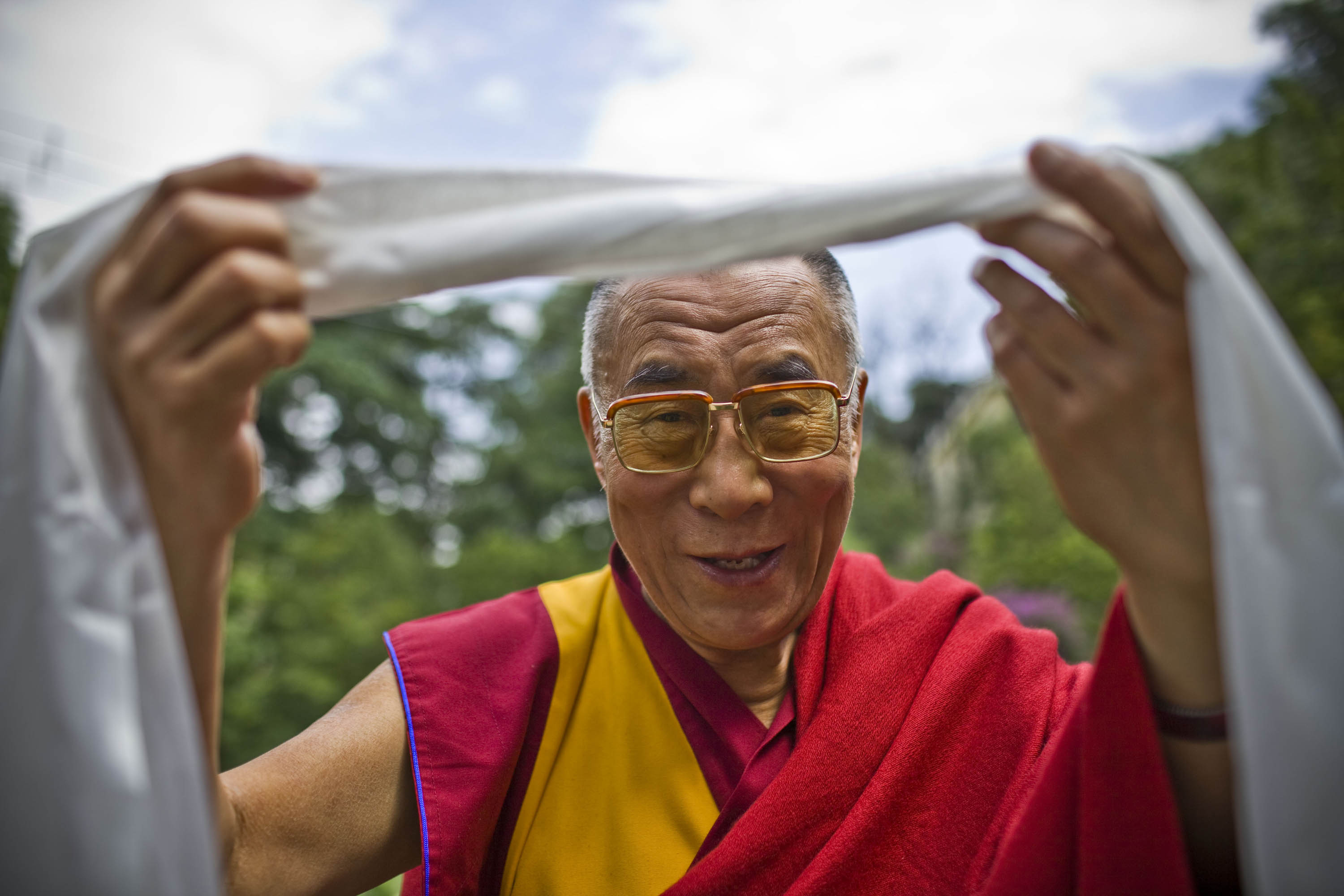 Since China’s control of Tibet pretty much changed the whole country, killed its citizens, and placed new rule over the people, many Tibetans exiled. To this day there are refugees living in other countries, majority of whom live in Nepal, India, and Bhutan, along with many Tibetans who continue to protest against China’s rule. 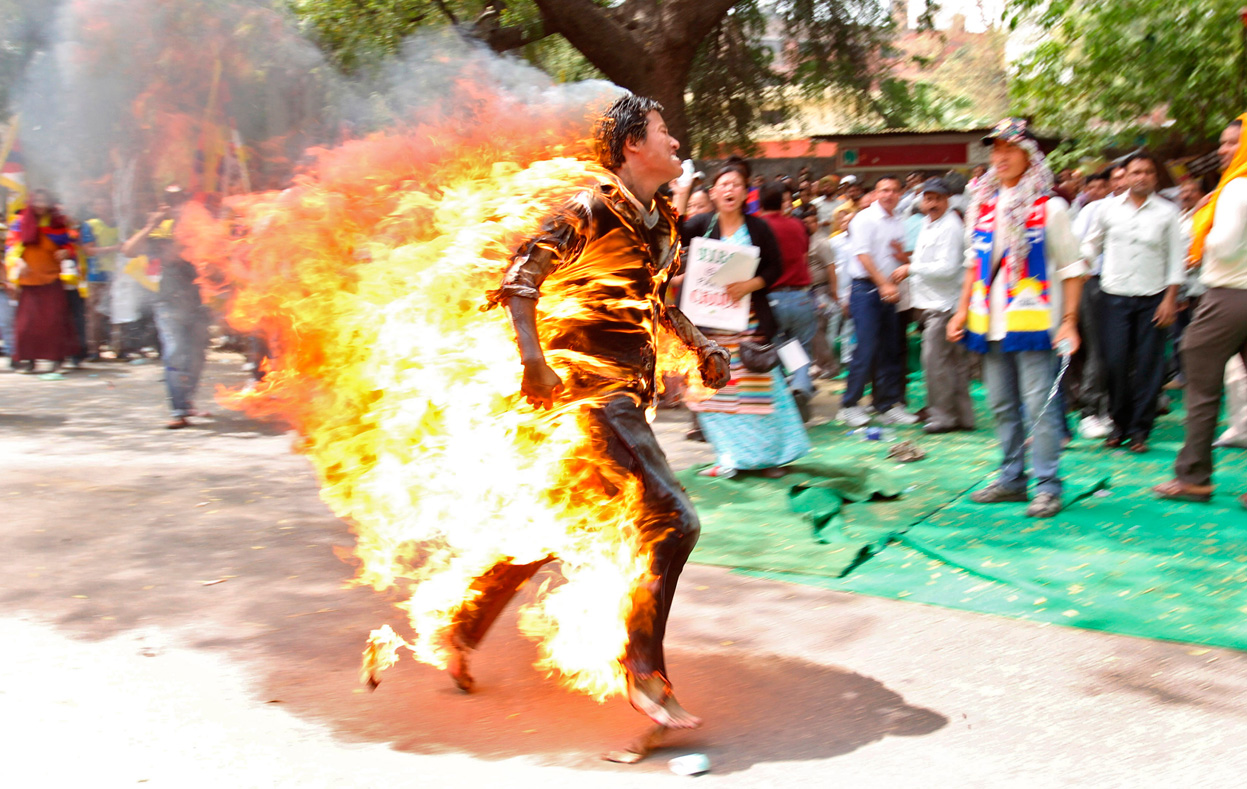 Self immolation, a form of protest.

Part of the reason the Drepung Gomang Monks go on tour is to not only promote world peace and share the beauties of traditional Tibetan Buddhism, but to also to help raise money and awareness of the thousands of Tibetans in exile.

Though this content might not be what you’re used to from me, i’d like to bring you through the beautiful performance just as I experienced it, while also explaining the meaning behind each act. I made sure to arrive early to get a good seat, right in the middle of the front row. I was overwhelmed by their mantras and performances, I left in tears.

The performance began with a Mandala offering, which is performed to enhance positive energy and purify negative influences. Next was the Tashi Shopla, the “Good Luck Dance.” 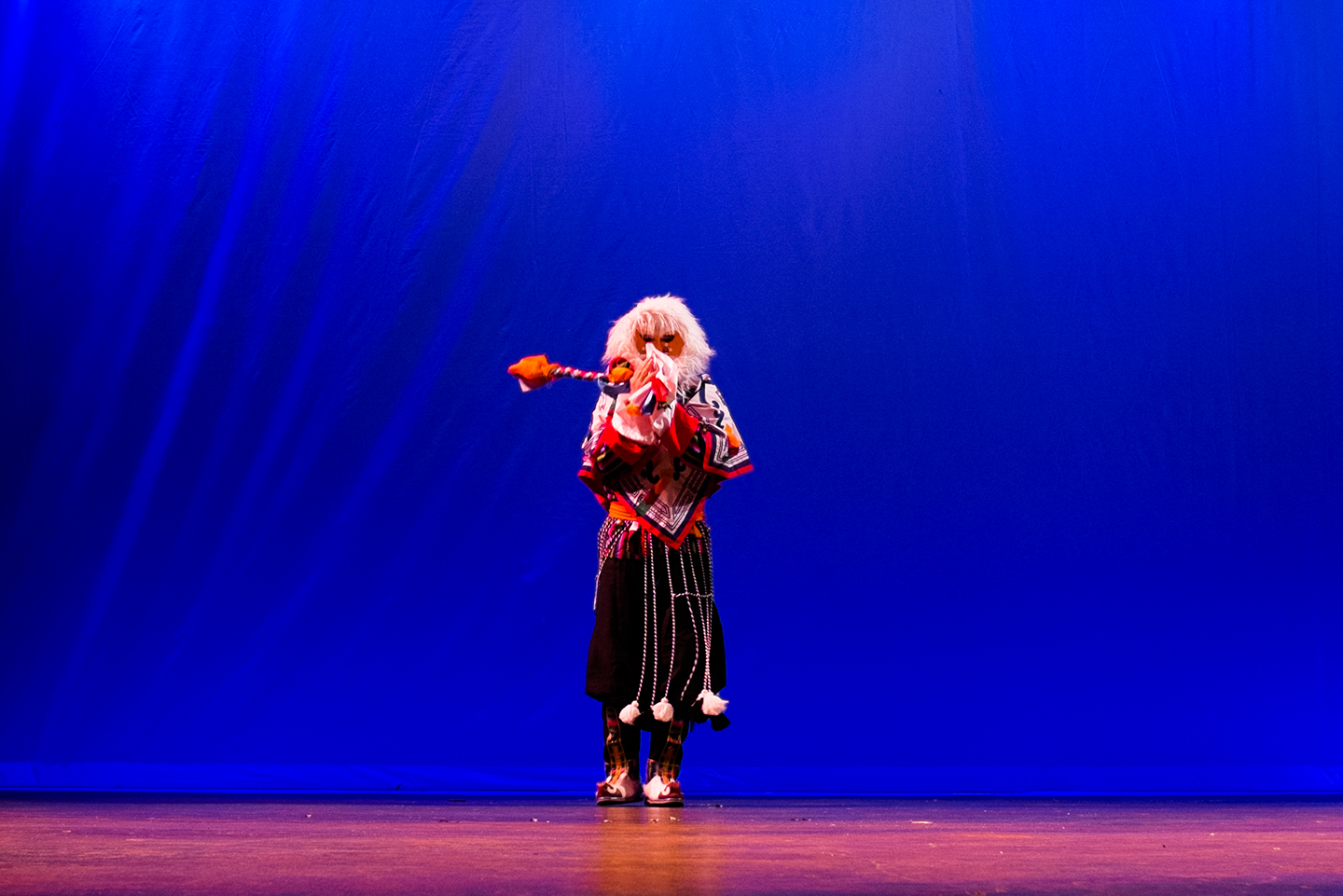 This dance is said to have appeared in the dream on the Fifth Dalai Lama. The striking yet colorful performer wears a white-beard mask to represent Saint Thanton Gyalpo, the founder of Tibetan opera, who reputedly lived 140 years and symbolizes good health. The dance is intended to bring good luck and omens, specifically to inaugurate special occasions. Next up, the Yak dance… 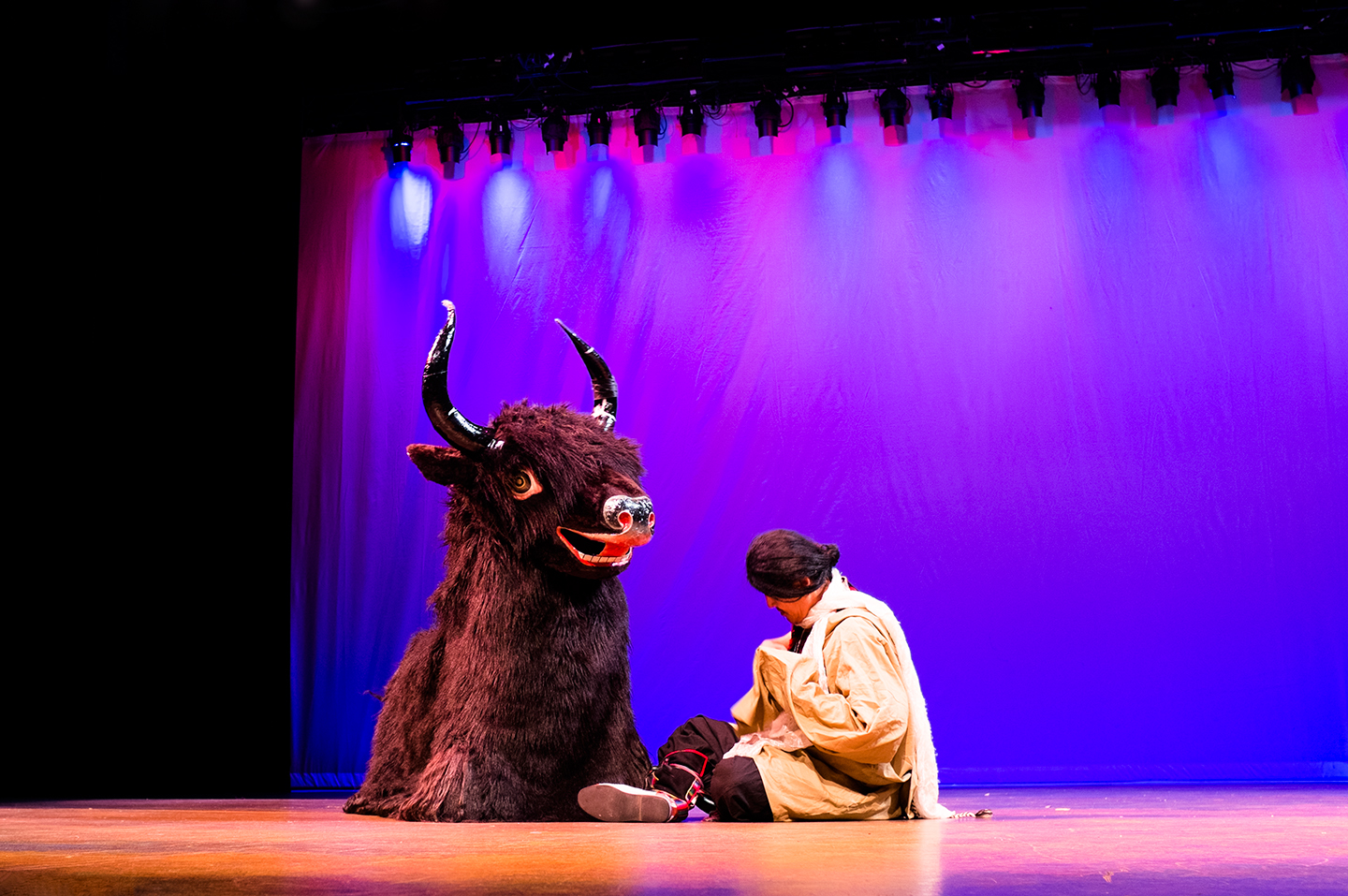 Tibetan Yaks are native to Himalayan Mountains of Nepal, India, and Tibet. They are highly adaptable to a variety of habitats and are very intelligent animals. They can climb altitudes of 20,000 feet and can carry 200 pounds of weight on rugged terrain, unlike horses. The unique animal is symbolic of the Tibetan spirit of strength and playfulness. Then, the Snow Lion appeared… 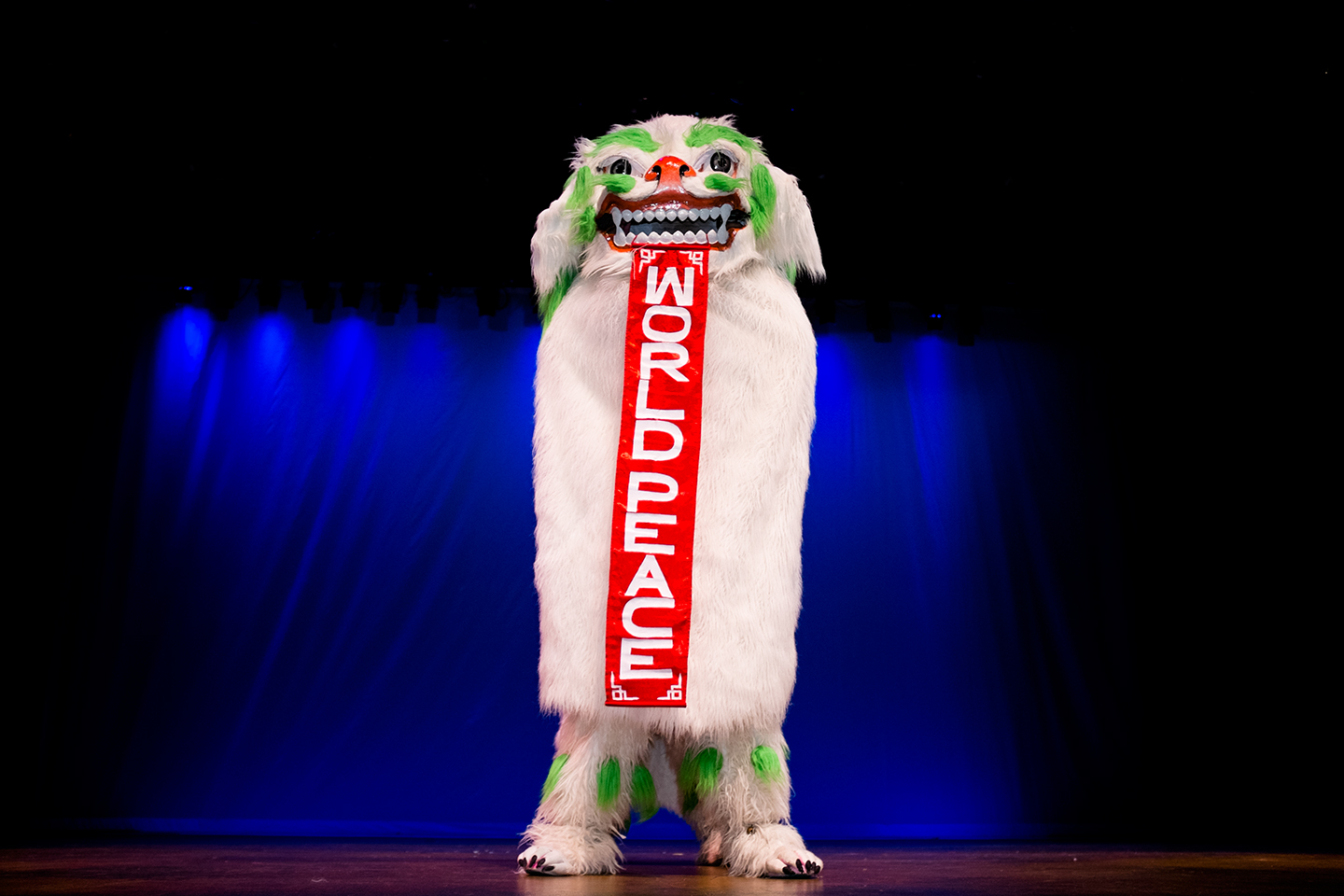 The Snow Lion is the mythological animal that represents Tibet (the snowy country.) This animal symbolizes the fearless but elegant quality of the enlightened mind. I couldn’t stop smiling as the Snow Lion bounced across the stage. Its image can be found in the Tibetan National Flag. The Snow Lion is the king of all beasts. It represents absolute freedom, roaming around with its eyes turned to heaven. 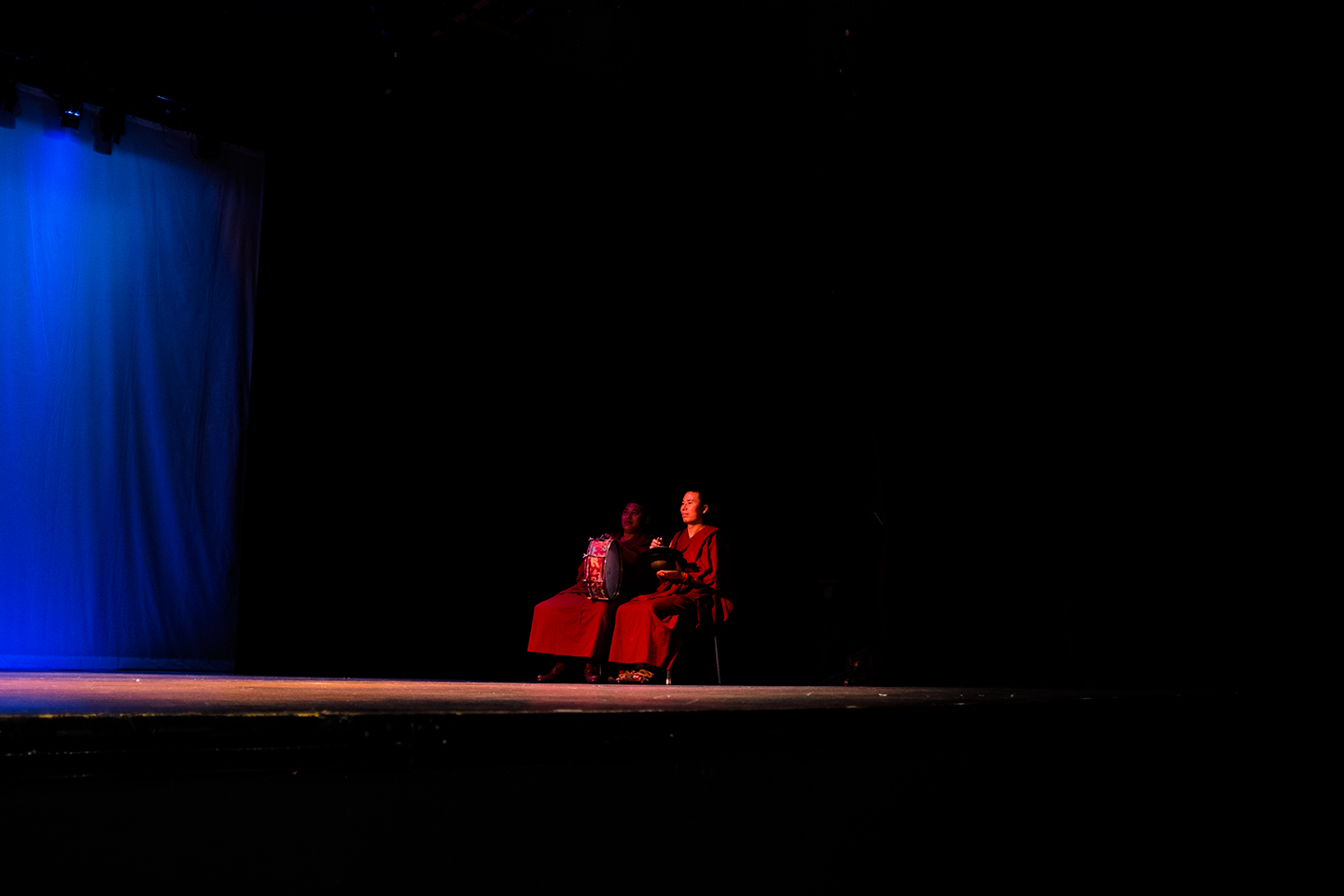 The monks playing deep sounding instruments to accompany the dancing.

The chanting of Chod. Chod literally means “to cut off.” This practice is designed to cut off all ego involvement and defilement. It is a prayer for loving kindness, compassion, and the mind’s enlightenment. This prayer is used when one meditates on selflessness and removes self-cherishing ego by visualizing the sacrifice of one’s body for the benefit of others. I know, it sounds sort of intense, but it is incredibly soothing. 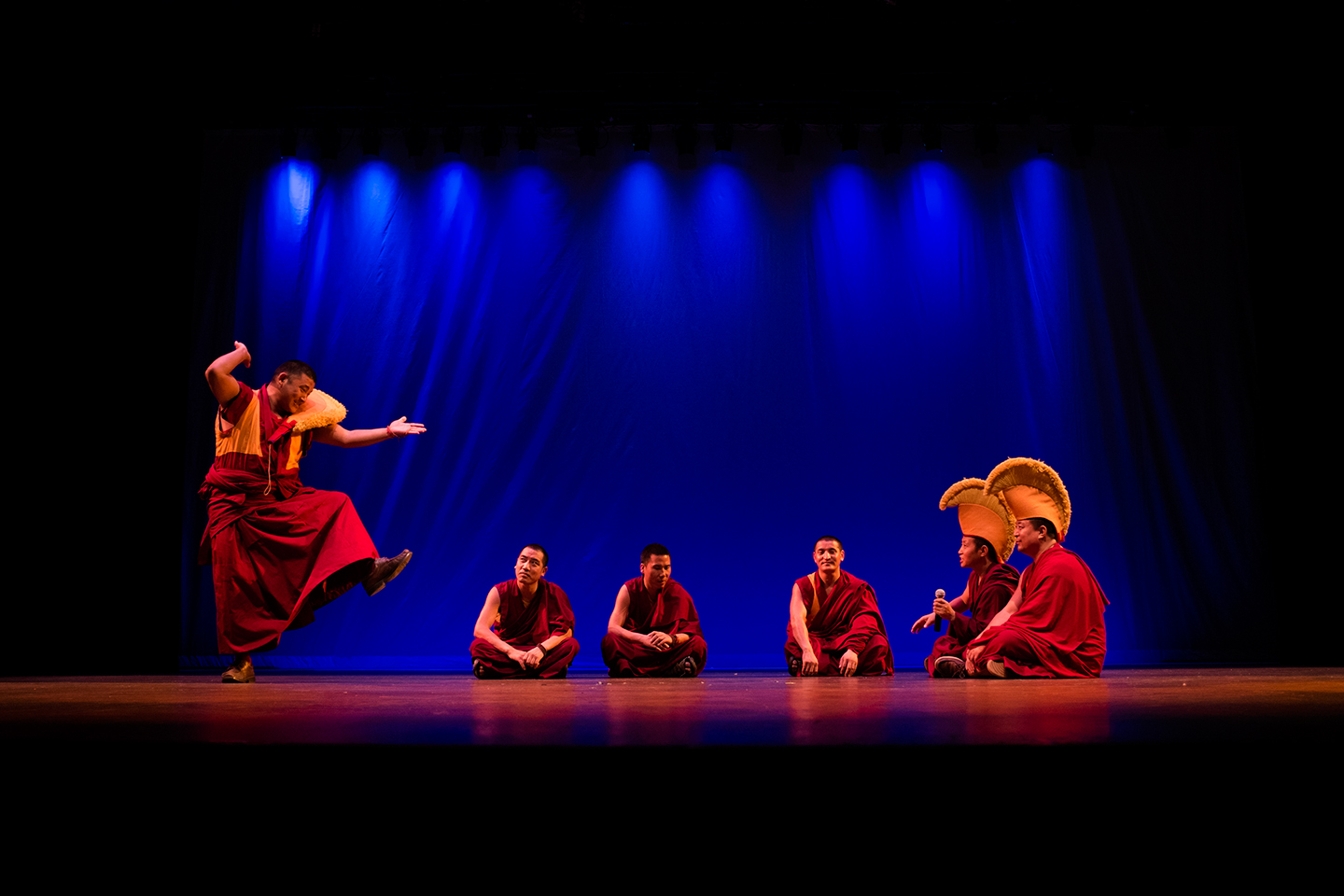 The final performance was the demonstration of the traditional Tibetan debate. The narrator listed a few words for the audience to listen out for with translations. As the monks debated with loud claps, yelling, and smiling, I found it hard to listen for those distinctive words. It was probably one of the coolest things to watch peaceful monks screaming loudly at one another. The practice of debate is the most important way to learn Buddhist philosophy. The main purpose of these debates is to defeat misconceptions in order to establish a correct view. 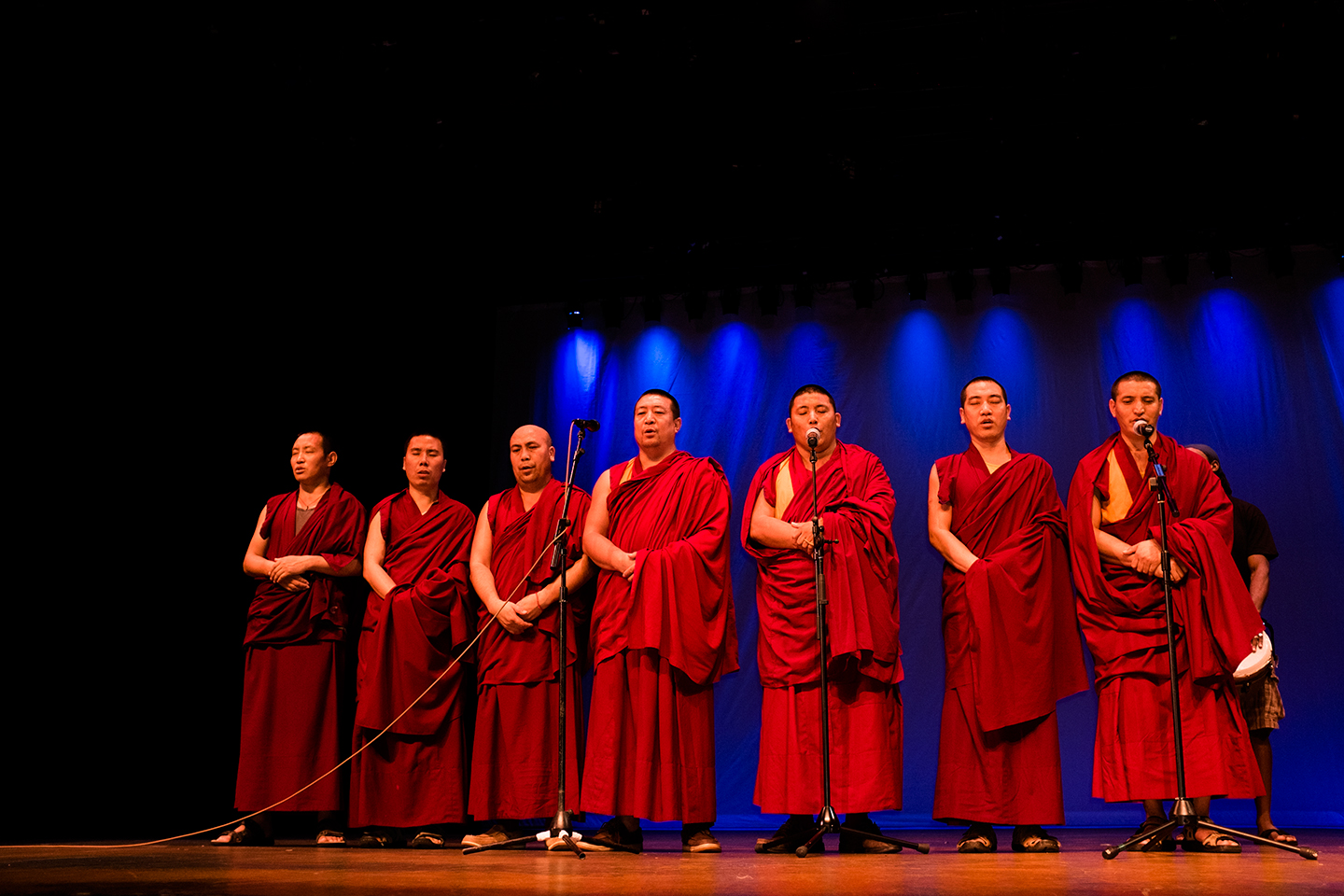 At the end of the performance, all of the monks came out to chant a final mantra with the audience, “Om Mani Padme Hum,” which translates to “Hail to the Jewel of the Lotus.”

Thank you to the ChakraSamvara Center in Miami Beach for hosting the monks for two weeks, it was an experience like no other. I hope the next time I see these monks that I am in India, or better yet, Tibet.