An Interview with Editor and Writer Doug Lussenhop

Described in a 2012 LA Weekly article as “short with light hair” and “mild-mannered and good-humored with minimal ego,” I found this to be mostly true when I met editor, writer, musician, comedian, and performer Doug Lussenhop/DJ Douggpound at his Highland Park house in the morning before work. I hadn’t eaten anything and stopped drinking coffee about two years ago, but humbly and gratefully accepted his proffer of coffee, which made me feel great and surprisingly “very pumped” for our interview.

If you’re familiar with Doug’s work, then you know he “loves 2 skate,” is very funny, and likes to use sound effects. He’s lent his particular style of oftentimes unsettling surrealist anti-humor through his editing on shows like Tim and Eric Awesome Show, Great Job!, Portlandia, and The Eric Andre Show. He has a dog named Boug (rhymes with Doug), a YouTube series called Pound House (Tim Heidecker called it “the best show on the Internet”), and he hosts The Poundcast as DJ Douggpound. Skateboard D likes to make people uncomfortable and the end result is usually funny. Because I am an unfunny person, I’m pretty sure I, in turn, made Doug uncomfortable during this interview where we talk viral videos, breakdancing, and loneliness X success (the greatest collab of all). 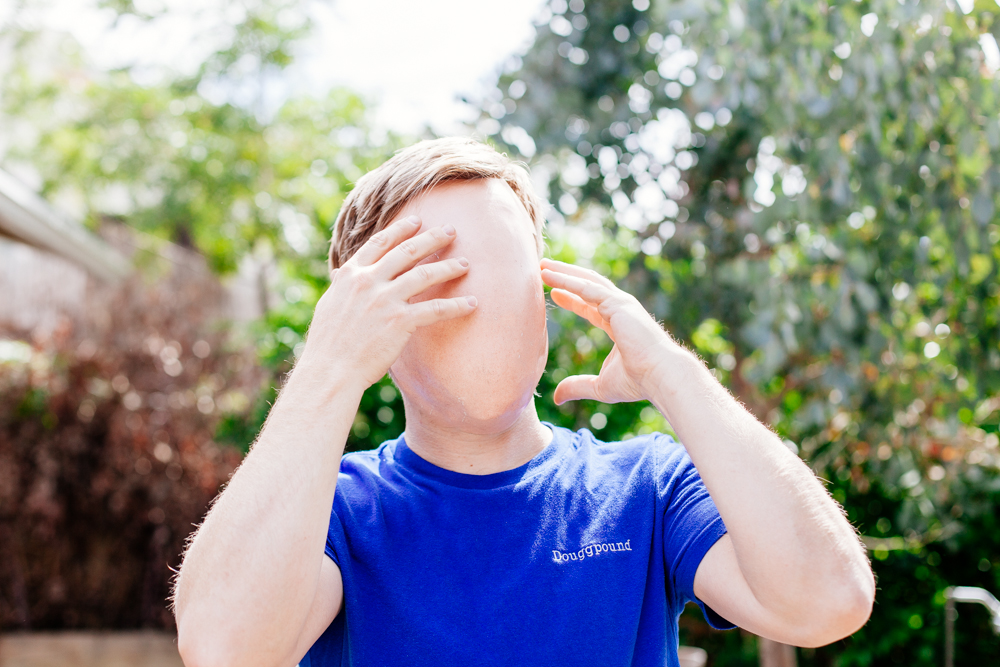 This mask was used in this Story pig episode that Doug edited and stars in.

Our photographer loves your dog. [whispers] Too much. I’m just trying to get to the heart of Doug. I don’t know how. I want to know what Doug is. I want you to show me.

Basically, when I was a kid I used to watch Monty Python on a black and white TV on Sunday nights. In my bedroom. That was in the late ’80s. I just found some free TV and I remember watching it in junior high school. I thought that was funny. My friend’s dad had a video camera and we started making videos. I guess it’s just like anyone’s story. You’re a kid, whatever you like, you gravitate towards it. And if you stick with it and just keep doing it, and if you’re lucky, and just keep doing it enough, you’ll get to do it for a job.

How did you begin to develop your editing style? I noticed sometimes you’re credited as like a fifth Beatle of sorts with stuff like Tim & Eric with your editing.

I don’t really agree when people say that! Well, with Tim & Eric, for example, I think it started the thing with “me as editor having a hand in how these shows look” or whatever, because early on, I would do just really screwy edits to make myself laugh. Almost as a joke, like look at this, look how stupid that is. But they would love it. They said, “Make it as weird as you want.” They would encourage crazy editing, so that opened me up. The sky’s the limits here now. Any rule of editing is out the door. We can make anything stutter or skip or loop. Like, once they started encouraging that, the creativity kind of like… started… flowin’. [laughs]

[Laughs] When did you first start developing that style of editing?

After college I lived in Chicago at an art gallery and I would do video screenings of my videos and my friends’ videos. And all of mine were silly. I would record like Fox News and re-edit it – I would take their opening theme song and make a beat out of it or whatever. This was like late-’90s. Like ’99, 2000, like ’99 to 2002-ish. Back in those days, my friend Eric Fensler made those G.I. Joe videos. I helped him edit the first four of those, actually.

My friend Dave Dobie from Heaven Gallery said, “We should put these online.” He made small little Quicktimes and put them on our site since there wasn’t YouTube yet. After a few weeks, they got that thing, where it got viral or whatever before the word viral was a thing. And our server crashed and our site got shut down. Then Hasbro gave him a cease and desist because of G.I. Joe. Which is ridiculous. Can you imagine nowadays getting some kind of cease and desist from making a YouTube video?

That’s so weird! The viral thing is interesting. These days everyone’s like, Okay, guys, [rubs hands together] for this campaign, we’re gonna make a VIRAL VIDEO.

I know. I hate that. They all wanna make a viral video. You can’t just make one, you know? A lot of viral videos don’t know they’re gonna be viral – like someone getting kicked in the balls or something or being an idiot on TV. They’re not planning on it. Once in a while they plan.

Well, did you see that fucking kissing video? The strangers kissing one?

[Laughs] I mean, obviously, they knew that was gonna go viral. It’s like a list on Buzzfeed. “20 strangers kiss each other.” “10 ridiculous facts that you never knew… sponsored by H&R Block.”

And you get to the bottom and the bottom fact is “TAXES CAN BE A LOT EASIER IF YOU USE H&R BLOCK.” It’s like [hits table], “Goddamn it. What about these other facts? Do I just dismiss every interesting thing? Because it’s all interesting stuff!”

I hate when you see those things and it tells you the emotion you’re gonna feel before you look at it. Like on Facebook it’ll be like “Top 20 Most Mindblowing… Pools – Number 5 Will Blow You Away” Number 10 Will Have You Crying! And 20 Will Make You Shit Yourself! Top 10 Saddest Puppies. The 3rd One Will Make You Tear Up. By 5, You’ll Be Full Blown Crying. By 10, You’ll Have Slit Your Wrists. Because they’re so sad… these puppies.

Oh, look at that hummingbird on my little thing. That’s cute. 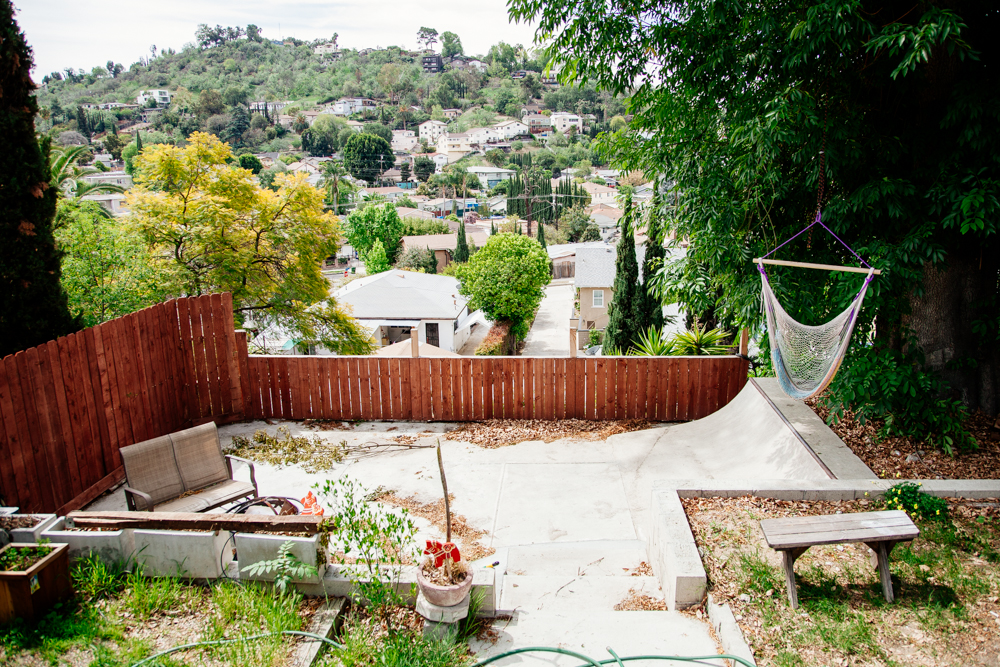 You mentioned that you got “your start” breakdancing. Can you tell us more about that?

Yeah. [Laughs] My start. When I was a little kid, I remember breakdancing was popular in the mid-’80s. I got into it and my mom worked at a playground in the inner city of Southside Chicago. She’d take me to her work at this inner city playground which looked like a huge concrete jungle and I remember this guy Sergio would teach me how to… breakdance.

Yeah, shoutout to Sergio if you’re out there. Me and my friends out in the suburbs would get some cardboard out, bust it out in the garage and we would learn how to breakdance. I was friends with the older kids who were hip and down with house music and breakdancing. I was like 10. I was from the suburbs, but I got a little… taste of the inner city and I would come back and bring what I learned from THE STREETS… back to Downers Grove, Illinois.

That’s when I got my taste of performing. We would get our little group together and perform. We won this contest in a Burger King parking lot. We DESTROYED the competition. We had matching outfits – I didn’t, but the bigger guys did. They looked fuckin’ slick. We were called The Suburban Street Rockers. I definitely think that experience gave me like a bug of performing in front of people. I guess that’s how it started.

[Laughs] It planted… a beat. A beat – a beat was planted.

Were you always comfortable being on camera?

Well, also, in the early ’90s I had a cable access show. I’m too embarrassed to put it online. On that show, I never wanted to be on camera. Only recently did I start being on camera. I was too self-conscious. I would perform as a breakdancer, that’s dancing. But as a comedic actor, I felt too self-conscious about that.  It was a weird show of edited-together found footage and my friends doing sketches about food. This was after high school.

It was basically a product of being extremely lonely in the suburbs. Going to college and having like no friends. [Laughs] Because my good friends from high school all went away and I went to community college. I had like one friend.

You were one man with one friend and one camera and you just – you just picked it up one day and that’s how it all started!

I got a job as a wedding videographer, so I’d take the camera home at night and make my cable access show with it. I even edited my show at work. This was before Final Cut Pro. It was tape-to-tape editing in the early ’90s. I remember when Final Cut came out – for years before it came out, I thought, they HAVE to have editing on the computer. And when it came out, I was like, FINALLY, YES!

I think this is great. I mean, it’s just a heartwarming story of a lonely guy in the suburbs who had a job recording and editing weddings. And his dream of editing came true.

It’s really what it’s all about… If you suffered through a lonely young adulthood. Many years of being super lonely, you have to invent your own entertainment because what’s on TV is no good… except Ren and Stimpy. Starting off editing tape-to-tape probably made me a better editor, because everything had to be so deliberate. You couldn’t just copy-paste things. It’s linear. Now things are non-linear, you can just arrange it any old way. That probably helped.

If anyone wants to be a successful person… be lonely for a while. Oh, look, a hummingbird on the thing again!

What have you been working on lately?

I just directed these videos Esther with Hot Chicks. Have you seen it?

They’re super buzzworthy. They’re buzzworthy and upworthy. You gotta check these out. You will not believe number 2, it’ll have you in tears.

Watch season 1 and season 2 of Pound House and follow Doug on Twitter @douggpound. Listen to his podcast The Poundcast here.