Late last month, I embarked on a 3-day journey to cook for Urban Outfitters corporate in Philadelphia. My homey put in a good word with some of the company’s executives, so I wound up getting a chance to have a tasting in front of them in their home turf.  Since I had to rush back to the food truck in LA, I only had 72 hours.  I couldn’t be in Philly and not go to my hometown of NYC, ESPECIALLY in the summer time.  With just a carry on bag and a few disposable cameras, I did my best to eat and visit some of the most sought-after restaurants in both cities. Unfortunately, a lot of the disposable camera shots of the food were taken too close and came out blurry (and my finger makes a few cameos in the frame), so I hope you enjoy this visual recap of my trip regardless.

It took me 15 minutes to find this restaurant Zahav in Philly, because no street with cars goes up to it.  It’s tucked in a bunch of corporate offices.  It looks like a packaging solutions company from the ’80s.  Nevertheless, I was deeply impressed but the food, Israeli tapas, and amazing cocktails...

Pictured is Laffa from Zahav, an Israeli flatbread. Like pita, this one was cooked in a wood burning oven and served with a fava bean hummus.  I was getting in touch with my inner-Jew.

At Urban Outfitters HQ, you get a summer party with a go kart racing track.  Ahhh the perks – why do I cook food for my own company again??? 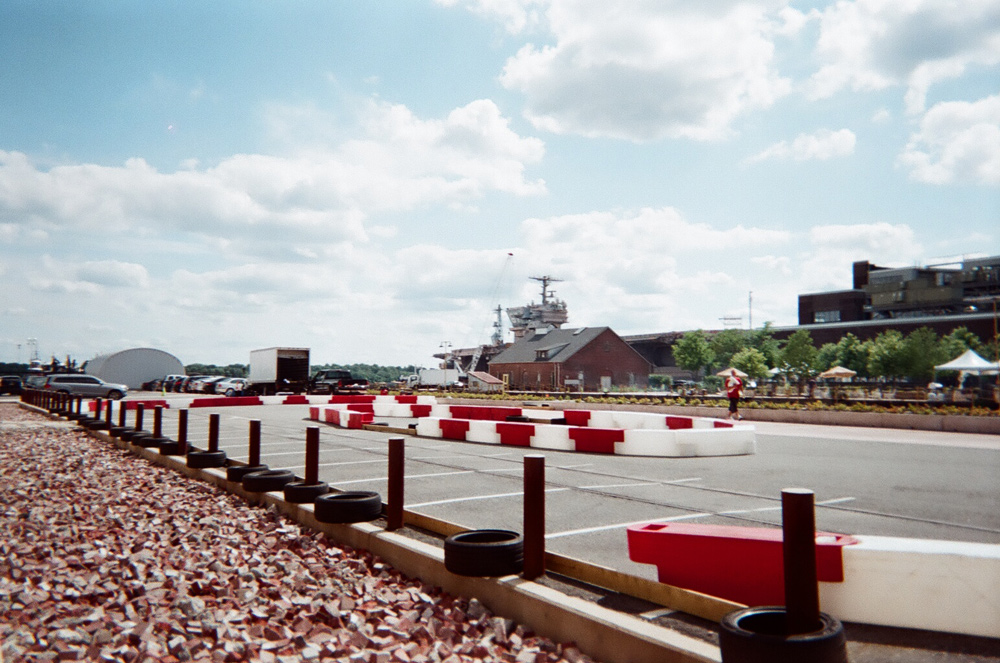 These guys wake up each day and make food for 1500 UO employees each day. That’s chef Steven right next to me. He is so much taller than everyone. That must be one of the reasons he got the Chef position. Kidding. He is a leader.

This dude moved from Jersey to cook in Philly. He helped me assemble 140 sandwiches.  I asked him to throw up the peace sign for the camera but laughed at my ass. East coasters.

Yep, we ran these fatty boom batties as a lunch special at the Urban Outfitters corporate HQ.

I was on the line for an hour for one day in Philly and then I’m out!!!

At the Urban kitchen, it is so massive and open, almost every cook has their own prep table. It’s virtually 5,000 square feet of kitchen, maybe larger.  No wonder this guy is so happy.  He is a great person and doesn’t have to sweat next inches away from another sweaty dude!

On the navel base, ships used to pull up and solid navy men would come off the ship and eat lunch. Now it’s a bunch of fashion-forward young women coming out of their Volkswagen beetle, drinking iced Americanos!

I was hoping so bad that the Free Range meeting was going to be on this ship! 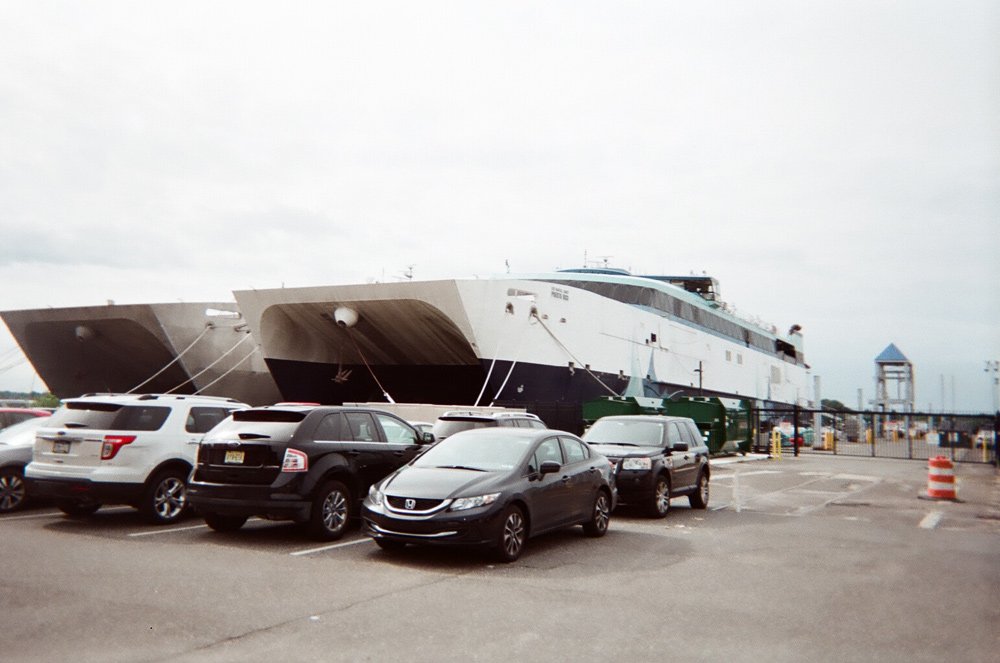 The homey Kyle Ng, got us a room in the General Quarters at Urban’s Navel Base. These houses are for important guests of Urban.  They are the actual homes that Generals used to stay in back in the day. Let me just say that the bathroom soap smelt ahmazzzzing (no homo).

The rust on this building was so intense and that basketball hoop looked so sad.  Should have brought my Kobes and a Spaulding to Philly.

Swaggy Halal guy stirring all that Halal meat, these guys have a line in Midtown NYC, all day every weekday. Crack chicken and crack sauce! 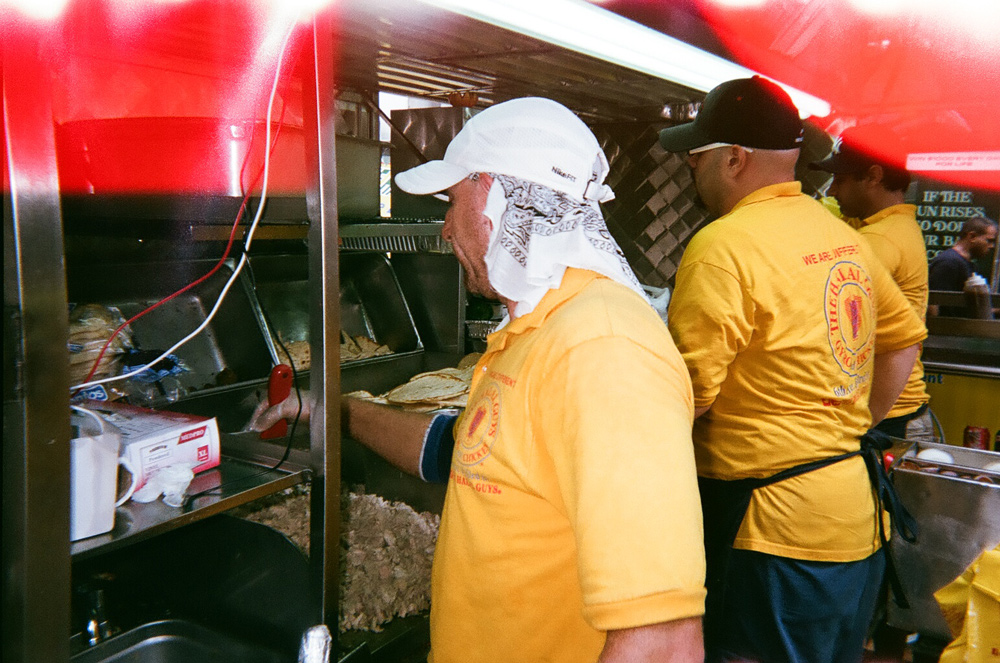 This is not even the lunch rush. This is the line at 4:00pm.

But I didn’t mess with Halal because I only had one day with the most special woman, my mom.  So I took her to a 7 course lunch at Michelin star restaurant, Le Bernardin. SOIGNE!!!

My mom is power lunching at Le Bernadine with her son who comes to NY like once a year and has to constantly deal with my brother wondering why he didn’t get the invite for lunch.  Sorry Bro!

This truck has been parked in the same spot on my childhood block for the past 25 years. Legacy! 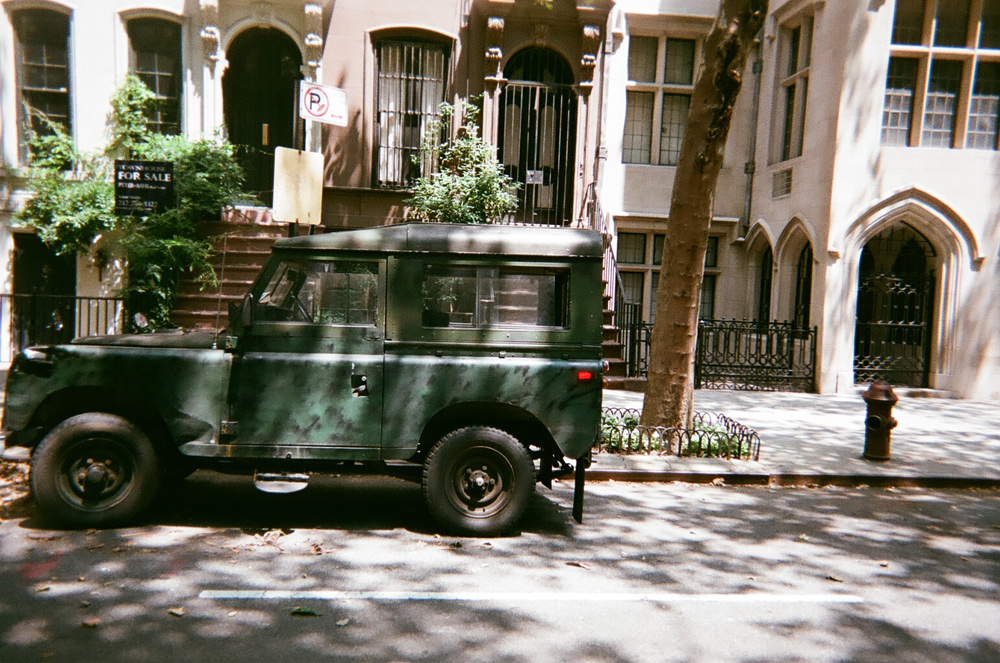 I woke up in my old bed and had to take a crap, but no one in the family told me that they tore up the whole room and a dude working on the pipes. I guess I have to hold it in until FAO Schwarz.

This spot on Orchard street in the Lower East Side, just opened 3 months ago. It is the café to the famed cured fish and bagel shop next to Katz’s deli. Russ and Daughters specialty store has been open since 1912. It is about time 102 years later that they open a café. I was super amped. Finally I don’t have to get America’s best bagel and schmear on the go. 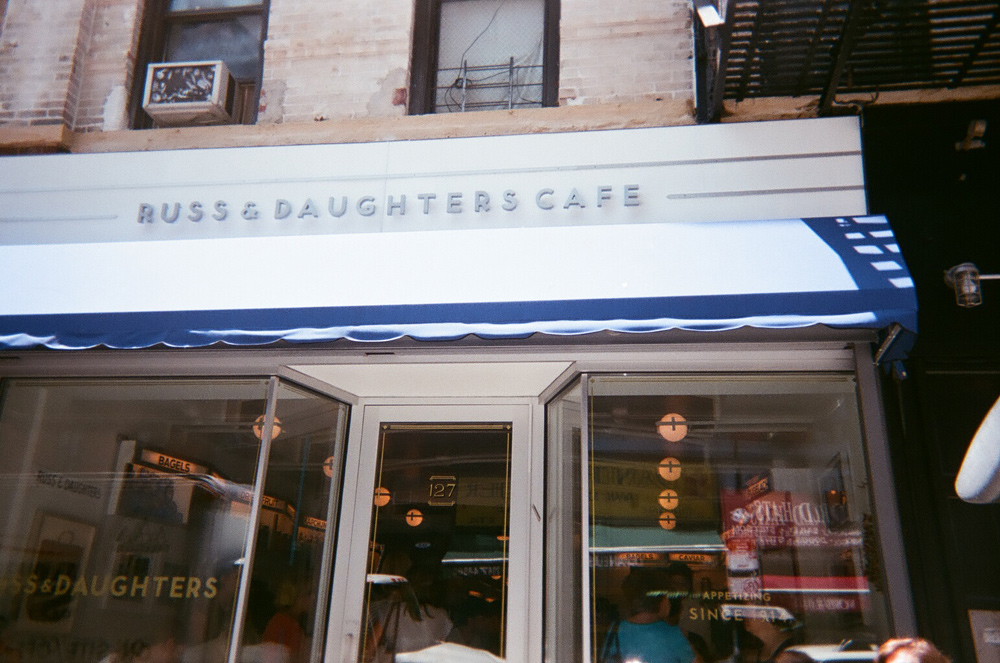 Love that classic look of the paper hats and all-white outfits, as the Russ and Daughter’s kitchen prepares cured fish plates and latkes. Bagel swag!

Pickled herring, everything bagel with nova, potted chicken liver and onions with toasted matza, latkes, and sturgeon chopped salad. Best European Jewish food that I have ever eaten. My mother was taking mental notes the whole time.

I love this shot of Russ and Daughter’s inside layout, the place has a great clean sleek white design with all the classic fixtures of an old soda fountain from the good old days. The signs and panels, the glassware, a slice of nostalgia from an older generation looks great.

Waiting for the F Train hoping that I would spot a Ninja Turtle!

This guy broke into my dad’s car so I can drive back  to NY before the sunsets in Philly, before all the Philly vampires come out to get me!

Federal Donuts is money and makes Paula Deen look like nothing. Federal Donuts is the casual quick concept by the same chef and owners of Israeli tapas restaurant Zahav and is growing fast.  There are 3 locations in the Philly area and one Philly stadium.  The concept is perfect: fried chicken, fresh donuts, and coffee. Nothing else! 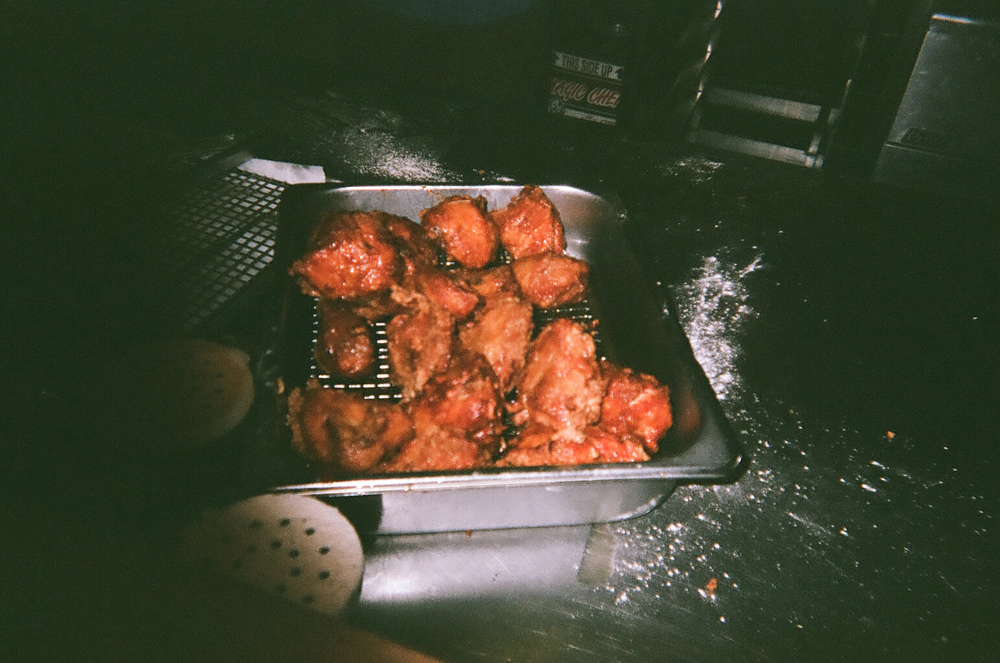 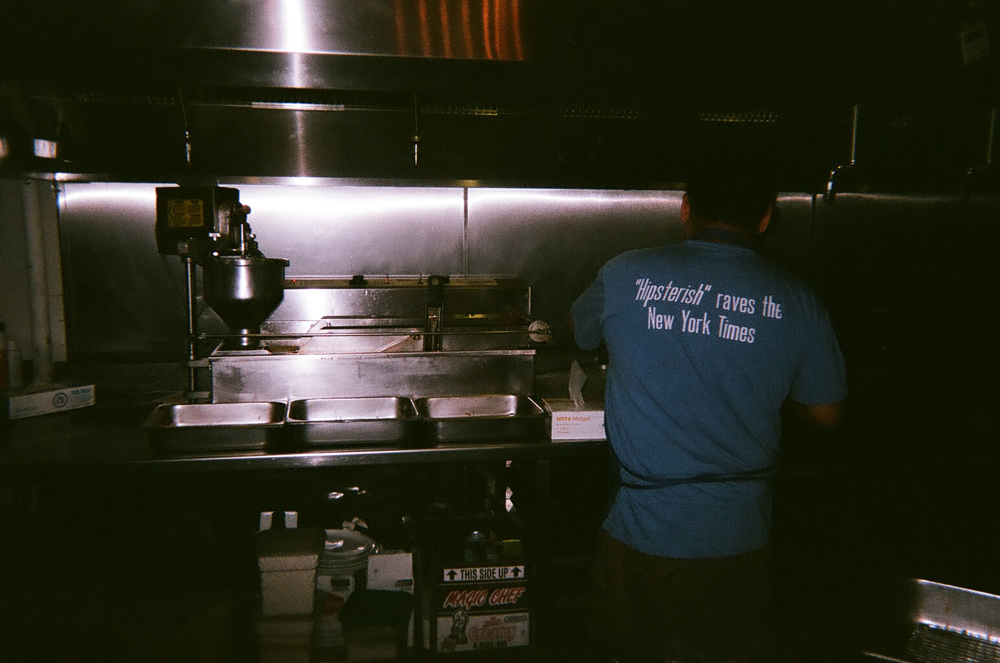 Kyle Ng/Farm Tactics. One of my best friends just worked two different trade shows in New York and rides with me out to Philly from NY.  I had to snap a shot of his ass sleeping. 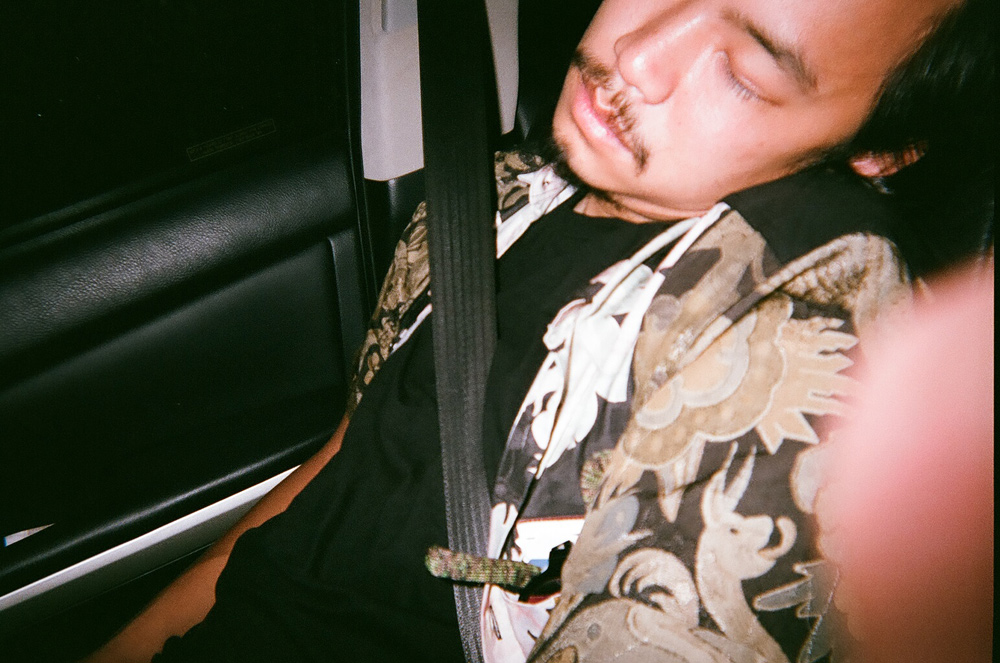