So I was perusing through The Hundreds Instagram yesterday and saw a post of Marvin The Martian staring menacingly back through the screen at me. This photo really stuck with me, there was just something about it.

Marvin is very, very angry. But you shouldn’t be, #TheHundredsXMarvin drops Thursday.

The graphic features a spherical shot of Marvin’s head, all shadowy and dark with eyes darting off to one corner. He looked familiar. Then, a commenter came from the clouds nailed it on the head.

“Is Marvin related to Adam Bomb? I see a resemblance here 🤔,” said @brokenpromisesco under the photo.

Wow, there really is a striking resemblance. And then, something else struck me as strange. The Hundreds co-founder Bobby Hundreds replied to the comment with no words but simply three sets of emoji eyes, a universal sign for “whoa hey look what this person said.” It’s almost like he wanted to respond to the internet person named Broken who was questioning the link between Adam Bomb and Marvin — but couldn’t.

What was keeping Bobby from commenting on the mysterious connection between the round-headed, seemingly-dangerous characters? And why were there three sets of eyes in his comment? Maybe there are three people sworn to protect the secret. Or maybe two people who both have their third eye open. Or possibly it’s one regular person, one person with their third eye open, and a cyclops.

No, it wouldn’t be that obvious. Or would it be? Whoever is behind this would probably want me to think that my first instinct is too clear a probability and chase down another more time-consuming lead, so maybe it is the most likely scenario after all. I don’t know, I forget what we were talking about.

Oh, the six eye emojis. Right. I have a theory about what’s going here but I’ll need to do more research and lay out all the evidence.

I mocked up a visual aid to show the similarity between Marvin and Adam. 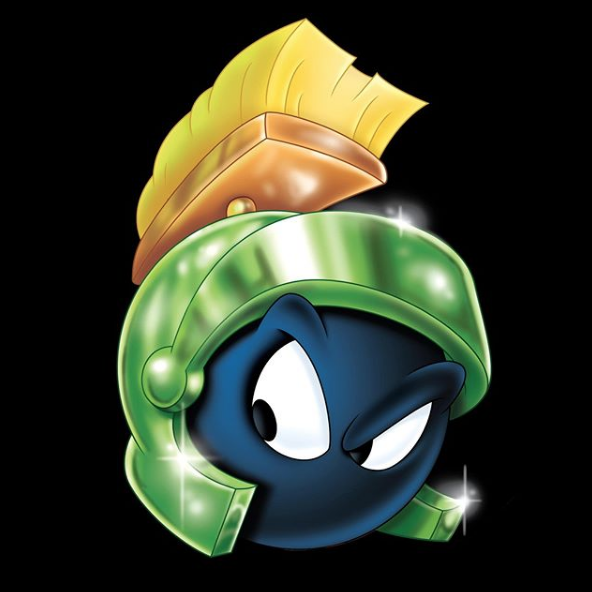 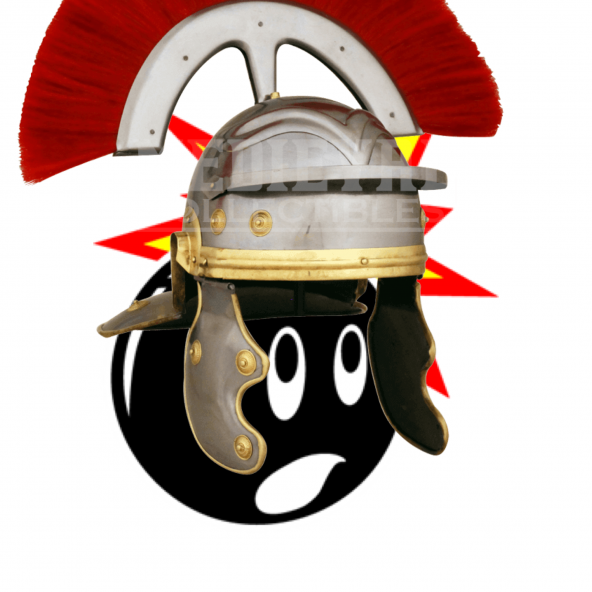 Now, while I doubt Marvin and Adam Bomb are related in the traditional familial sense, my extensive research leads me to believe that they could be related in other ways.

If we look at Marvin The Martian’s resume, he has been far more successful with his acting and merchandising than he has been with his plots to destroy Earth. In the more than 70 years since Looney Tunes fans were first introduced to Marvin The Martian in 1948’s “Haredevil Hare” cartoon, he’s continually proved ineffective at completing his master plan. We love him, but he sucks at blowing up Earth, plain and simple. Just stating facts here, everyone calm down.

And that’s only in the 70-or-so years we’ve known Marvin The Martian. He’s said himself he’s thousands of years old. And while humans are doing their best to destroy their planet all by themselves, the Earth is still technically intact, meaning Marvin has been striking out consistently for who knows how long? Maybe when the dinosaurs got taken out, that was the closest Marvin ever got to finishing the job.

So, at some point, it isn’t totally out of the realm of possibility that Marvin would have wanted to enlist some help, maybe collect some intel on this elusive Earth thing, the planet that had defeated him endlessly. Maybe he sent a spy down to Earth to see what kind of defense measures were afoot and what these Earthlings could have been doing to spare themselves all this time from not-so-impending doom.

Of course, Marvin wouldn’t create Adam exactly in his likeness as that would out him immediately as the mastermind of this whole operation. So, he changed him a little. Added a mouth, got rid of the body, etc, etc. But Marvin’s obsession with explosives just couldn’t be suppressed, and he still made the little guy into a bomb.

But did the timeline match up?

Looney Tunes: Back in Action, the live action movie that came out in 2003, may not have been the box office blockbuster that Space Jam was, but it did give Marvin another reason to come to Earth. The pre-production and rollout of the movie would be an amazing alibi if, perhaps, Marvin was actually visiting Earth trying to scout out locations and hosts for his interplanetary spy. It just so happens that a company called The Hundreds was formed in 2003 in Los Angeles, the exact same city that Marvin spent months in while working on the film.

Now, I know what you’re thinking. Adam Bomb didn’t make an appearance until around 2006, gradually appearing more and more throughout 2007-08 and beyond. But it just so happens that Warner Bros. announced in 2008 that Marvin The Martian would be the star of his very own live-action Christmas movie set to release in the not-too-distant future. Hollywood has gotten pretty good at pumping out CGI and live action mashups, but they still take a couple of years to create. This would have put Marvin in Los Angeles around 2006 to oversee the deployment of his little spy guy Adam Bomb. In 2012, a trailer for the Marvin movie leaked, proving that they had been “working” very hard on producing the film, however, it never saw the light of day. Maybe the movie didn’t need to come out. Maybe the mission was a success regardless.

Now, it seems weird that Bobby and Ben Hundreds would be involved in something so sinister as blowing up their own planet. No matter how annoyed they are with things that are going on all over the Big Blue and Green, it’s simply counterintuitive to disintegrate the whole thing. So, why would they agree to be the host family for Marvin’s brainchild Adam, here to gain intelligence in the hopes of destroying the planet?

To protect all of us.

Bobby and Ben are smart guys, like lawyer smart. They know what’s up. And nobody is more in tune with the toons. So, when Marvin approached the two of them to enter into this espionage agreement, they knew the Mad Martian was serious. He was bout it bout it when it came to blowing up Earth. In the interest of saving billions of lives, maybe Bobby and Ben knew they had to work with Marvin. They knew that if they turned down his request, he’d just go somewhere else, and they couldn’t trust that this “someone else” would handle the responsibility of protecting Earth as they would.

So, it is my theory, that they have been harboring Adam Bomb for the sole purpose of making sure he never blows up. Just like the hero Bugs Bunny manages to always extinguish Marvin’s Illudium PU-36 Explosive Space Modulator before it detonates, Ben and Bobby have taken it on as their duty to always ensure Adam’s lit fuse never reaches its final destination.

Though Marvin has been away from Earth for more than a decade, toiling away on his own failed plots, he’s still not pleased with Adam’s performance here on Earth, where the planet is still unexploded. So, he’s coming back. And guess who he’s using as his alibi again. The Hundreds.

He’s here for a “streetwear collab,” appearing on T-shirts and hoodies and dad hats, among other products meant to distract the sheep from the real reason for Marvin’s Earthly appearance. It all may seem legit, but I think after all of the evidence I’ve laid before you, it’s easy to see the true motive for Marvin’s visit to The Hundreds. He wants to know why he can even still visit The Hundreds on their home planet. To him, it should have been gone long ago. Marvin’s super not happy.

And you can see how worried Adam looks, even more so than normal. On Adam’s most recent appearance, a shirt called “Hidden” by The Hundreds, Adam is very clearly not himself. 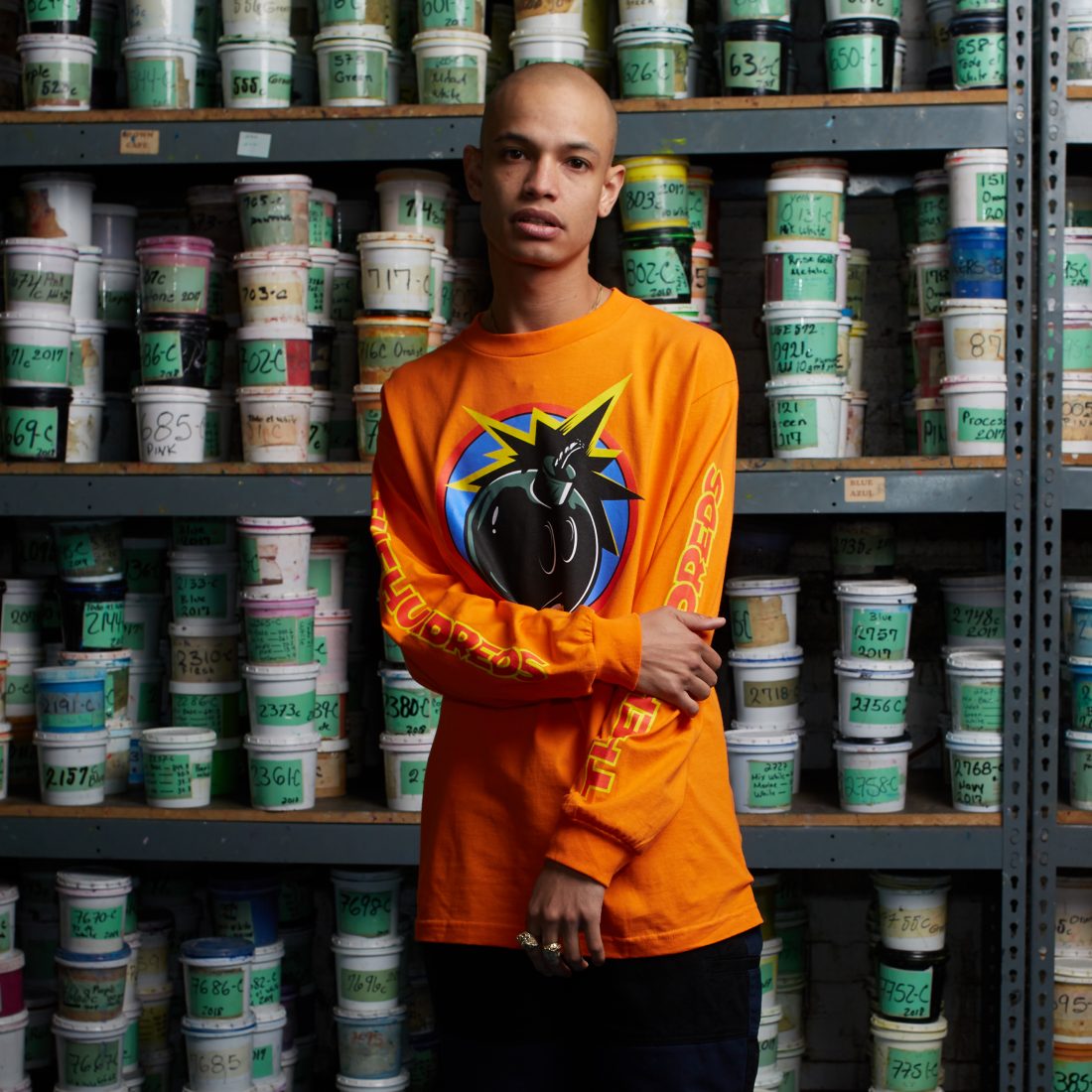 He’s hiding from the world, fearful for what his actual boss may do to him after this performance review. There have been so many false starts for Adam that he’s not even sure anymore if he can blow up and complete his mission. Poor guy has stage fright after all these failed attempts.

While Ben and Bobby are surely confident they can keep Adam from ever blowing up, a visit from Marvin undoubtedly makes things tense. That’s where the worried eye emojis come into play, I believe.

And who do the three sets of eyes represent? Bobby, Ben... and Adam, who has now become so accustomed to life in LA at this point that he can’t imagine ever decimating it. Sure, Marvin has made vacationing on Venus sound great, but Adam has developed lifelong friends on Earth. Plus, you can’t get tacos on Venus.

If we make the Marvin collab a success and act like we don’t know what’s going on between Marvin and Adam, maybe that will buy us another few decades of reprieve from the martian’s evil plan. The Hundreds Staff
On Thursday, May 23, The Hundreds will team up with Warner Bros. for The Hundreds X Looney Tunes: Marvin The Martian, a collaboration sure to make an Earth-shattering KABOOM. One of the most iconic... Kish Lal
It’s no fluke that Marvin The Martian’s Looney Tunes debut in 1948 on the cartoon “Haredevil Hare” coincided with a flying saucer crashing into New Mexico. While Roswell was said to be surreptitiou... Maxwell Williams
You don’t have to have a degree in Economics from Acme Looniversity to know that some of Acme's products are straight fire. Here are a couple of Acme products that writer Maxwell Williams wish exis... Maxwell Williams
From cameos in Animaniacs to Who Framed Roger Rabbit, we explore why the fictional mail-order company Acme Corporation might hold the key to the entire Looney Tunes world.
HIDE COMMENTS