Combing the Zoot Suit Riots and the Murder At Sleepy Lagoon

It was 1940s Los Angeles. Orange groves hung strings of citrus just miles to the south. Houses were popping up in the San Fernando Valley to the east. A jaunt to the Pacific lay just a few miles west. Young couples swooned over one-another, necking on those beaches, sipping bottled Cokes and puffing Lucky Strikes under blistering Southern Cali suns.

Los Angeles was in a boom.

Its greater metro area had a population larger than that of 37 states. Some 2.8 million Angelenos planted their flags and seeded their roots. There were Japanese, Chinese, Filipinos, Armenians, Italians, Blacks, and Mexican-Americans weaving into the sprawl, all amongst one another. The depression was over, and industries offered jobs, good-paying jobs. The stability felt tactile. Some sense of the promise of America being delivered. Actual prosperity a few turns of a wrench away.

But with cultural richness blossoming, one specific tragedy would pour floodlights over over the city, illuminating a bigoted mirk that crawled the social undercurrent of 1940s LA:

The Murder at Sleepy Lagoon. 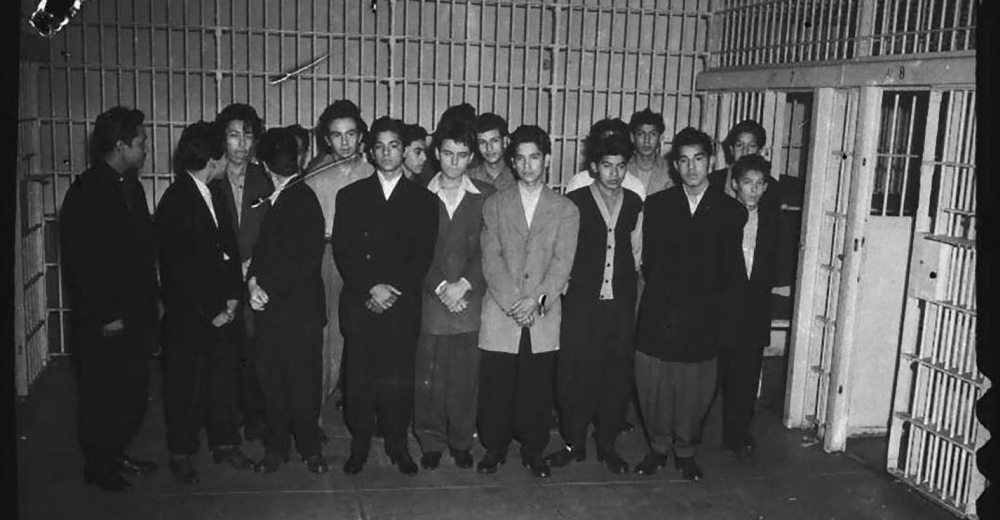 The beginning of the story goes a little something like this: In the wee hours of the morning on August 2, 1942—a Sunday—the police were cruising by a local swimming reservoir just south of Los Angeles, when they happened upon a twisted body in the brambles on the side of the road. That body was a man named Jose Gallardo Diaz, and the back of his skull was caved in. Not long after being rushed to Los Angeles County General Hospital, Diaz was dead.

The county coroner ruled death by repeated blunt trauma to the head, perhaps from spills on motorcycles. There was alcohol in his blood. But the cops had other suspicions—gang activity. Mexican gang activity.

If we review a timeline, the ’40s were a time of FDR, the infancy of the military industrial complex, and beginnings of the interstate system. The country was at war. The military was still legally segregated, as was much or most of public life. That is, it was before the widespread success of the Civil Rights Act, Kennedy, Dr. King, and the social activism of the ’60s.

Due to Diaz’s body having been recovered at Sleepy Lagoon—a popular summertime swimming-hole for young Mexican dudes—the cops followed their own narrative in investigating. And within days had rounded up 17 Mexican-American youths. Youths who were denied bail and proper access to attorneys. 17 youths all charged with the murder of Jose Diaz.

When historians and cultural anthropologists examine the veins of events that go on to shape history, what’s often unearthed is a cauldron with a few chance ingredients, that when combined, create something much larger than their separate parts. A specific set of ingredients that when all stirred, create a boiling, monolithic event. And this event comes spilling out into time, shaping culture and changing history.

Already in this pot: The war, a cultural milieu accepting of blatant racism, a boomtown, and a murder. 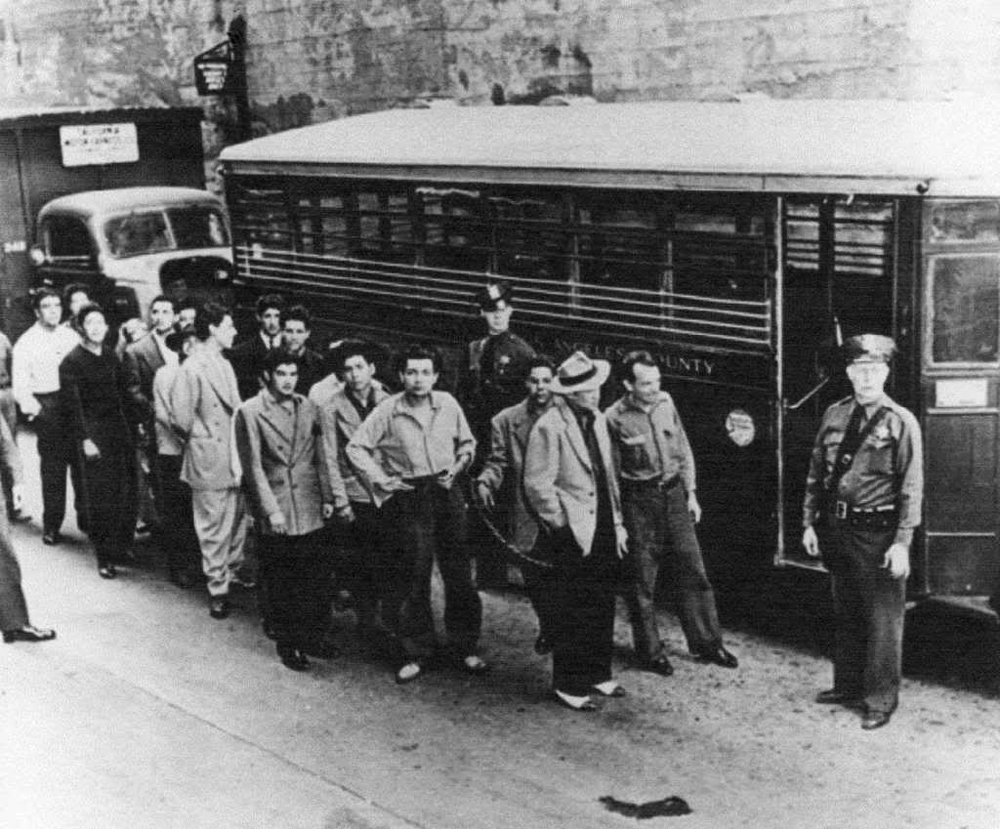 Immediately after their arrests, the youths charged with the crime are branded as belonging to the “38th Street Gang,” by the Los Angeles Evening Herald and Express. In the pages of the LA Times, they’re labeled as “miscreants” and “hoodlums.” But one particular aspect of the media’s focus really shifts the tides. They went after their style of dress: The Zoot suits.

Youth culture in the ’30s and ’40s was marked with Jazz on the jukebox, and the boxy Zoot suit. The look included billowing high-waisted trousers, reet-pleats, tapered narrow at the ankle, a long draping coat with protruding shoulder pads, and was topped off with a slick pork-pie hat (think Heisenberg), or a fedora with a single long feather. At the time, the Zoot suit didn’t demand Chicano/Pachuco subculture, but the Chicano/Pachuco youths demanded the Zoot suit.

At the request of the district attorney, Judge Fricke required that the defendants wear their Zoot suits for the duration of the trial, that the public may see what criminals wear. The media named the accused “Zoot suiters.” The public now had a brand to delinquency. The Zoot suit, a mark of malaise.

With the America’s involvement in the war in full-swing, and the wider (and whiter) public conscience fully soured on the Zoot suit look. The War Production Board—a government agency that oversaw industrial manufacturing—prescribed guidelines for a more proper American suit, under the guise of ‘wartime rationing.’ Its regulations for tailors and manufacturers required that all suits reduce the use of fabric by 26%, effectively criminalizing the manufacture of Zoot suits.

But with the demand for the look so high, it merely sent the manufacture of the style underground, with some businesses like L.A.’s iconic clothier, Greenspans, continuing to make the style in spite of the War Production Board’s guidelines.

So, after the regulations were in full swing, if you were a young man out with the tomcats looking slick on a Saturday in your boxiest suit, you were viewed as insubordinate. You were hoodlum, outside the law, un-American. It gave the lawman a reason to harass you. It gave the shopgirls and business owners a reason to mistrust you.

The trial of the Murder at Sleepy Lagoon in January 1943 provided the media carte-blanche to stomp the Pachuco sub-culture into the ground. With the war on the public’s mind, the landscape of fear and animosity created an us verses them consciousness.

As it happened, a Naval Reserve training school was parked just inside an ethnic Mexican neighborhood. Sailors clashed with boxy-suited youths. The thinking went something like this: We’re sailors, we’re fighting in the war for this country. We’re in our dress blues, reporting for duty, and we’re in our battle dress dying on beaches for Uncle Sam. Your uniform, your swimming legs and boxy top, is the look of criminal, of a coward, a Mexican hoodlum, the look of all the things that is wrong at home. We’re role-models. You’re a problem. We’re brave. You’re a yellow-belly. We’re heroes. You’re killers.

By May 1943, that tension spilled out into the beginnings of a proper full-scale riot. One June night, an altercation between a sailor and a Pachuco escalated into a brawl outside a bar in downtown L.A. The following day, hoards of Navymen swarmed Mexican neighborhoods in droves, carrying clubs, and batons, beating anyone they saw in a Zoot suit. This was the start of the Zoot suit riots, a culture-war of staggering prejudice and a tilted power paradigm. 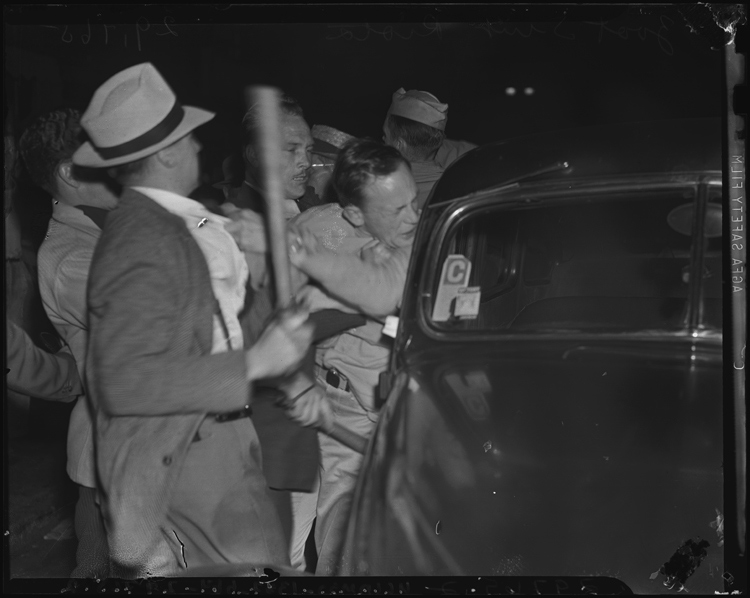 It was June 4, 1943. Sailors bussed out from the barracks by the truck full, cornering anyone who appeared to be a Pachuco. They savaged and bloodied boxy-suited youths, and anyone defending them, often times clubbing and stomping boys as young as 12. They stripped the young men of their suits, symbolically burning them in piles in the streets. They dragged young Chicanos from movie theaters and beat them under the light of the marquees.

By the time the media got a hold of the riots, if the Zoot suit wasn’t a tainted brand already, it had grown to be nationwide, spurring other soldiers and civilians alike, to take violent action against anyone in a Zoot suit anywhere. Arizona, Texas, Chicago, and New York saw unrest. The violence was reported with the expected tilt: the Navymen—the us, Zoot-suiters, the them.

The riots grew to be a media-colluded assault on entire group of people, where just a manner of dress was cause enough to pursue the destruction of the wicked. It was an excuse to root out the other. First Lady Eleanor Roosevelt remarked, “The question goes deeper than just suits. It is racial protest… It is a problem with roots going way back, and we do not always face these problems as we should.” It was an unofficially sponsored suppression of youth culture, powered by xenophobia, racism, and media bias. The perfect ingredients in a cauldron ripe for social disharmony.

Bobby Hundreds
Deep in the heart of South Gate, Greenspan’s has catered to the Southern California lowrider community since 1928. In this edition of Snapshots, Bobby Hundreds sits down with owners Evan & Josh... Kazie Holiday
The Hundreds is proud to present the "Chuco" jacket and "Zoots" pants, available in limited quantities at all flagship locations and in the Online Shop.
HIDE COMMENTS