Find What You Love and Let it Kill You :: Meet David M. Smith, Graphic Designer

There has always been the age-old argument of “where you’re from” defining who you are as a person. As I’ve grown older, I’ve realized that you are the person that you choose to be, even when it comes to choosing your creative avenue. Living in this day and age where getting into a subculture is as easy as a Google search, it sometimes takes away the discovery and innocence of it all.

Growing up for some is the complete opposite. Some of us had to really dig in and do our cultural research. San Francisco-based graphic designer David M. Smith aka The Blksmith’s story of how he got into graphic design is a perfect example of what it was like to find your passion solely based on curiosity and hunger. His story reflects his growth from an amateur to a now well-known professional graphic designer. Working with brands ranging from Element Skateboards to the Boston Celtics, he’s been able to leave his creative stamp within all aspects of the industries that he’s stepped into. I got a chance to sit down with David and to pick his brain about his graphic design work, along with everything else that led up to where he is now. 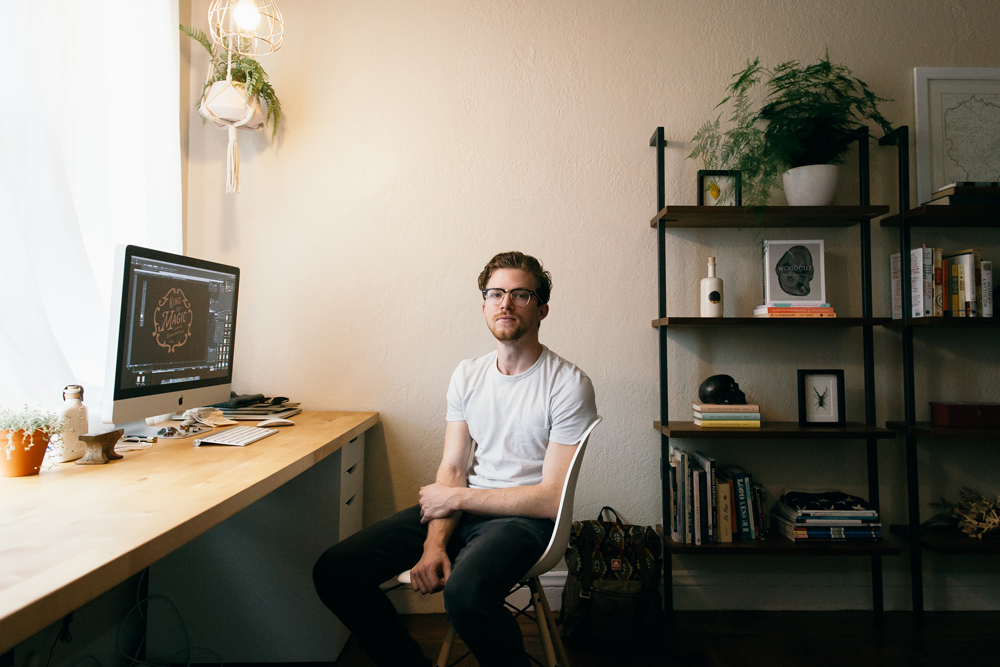 “YOUR ADDRESS ISN’T GOING TO MAKE YOU A BETTER DESIGNER. CURIOSITY AND WORK ETHIC WILL.”

BRIAN SIN: How old are you and where are you from originally?
DAVID SMITH: 25. Born and raised in Southern California. Originally from Temecula and moved to a little town in the Inland Empire called Yucaipa when I was around 11. Hated it there for a long time, but I guess it’s not that bad. Not a whole lot going on.

When did graphic design come into the picture?
I grew up the quiet art kid, and about 15 years ago, my older brother gave me a bootleg copy of Flash and Photoshop. That was the first big shift for me. I took as many art and design classes as I could while in high school and eventually went to art school like all the other cliches.

Did growing up in a smaller city have an affect on your design point of view?
If I was born a decade earlier, I’m sure that would of made all the difference. That wasn’t the case, I was lucky enough to grow up with the Internet. I don’t think the small town argument is as relevant anymore because of that. Your address isn’t going to make you a better designer. Curiosity and work ethic will.

Well said, I think the “where you’re from” perspective is a cop out mentality when really a lot of people have this burst of creativity in them without even realizing it.
It’s the moment when people do realize it that they start to shake things up. As long as you’re hungry, you’ll eat your way out.

In terms of what the most significant moment was—what was it that planted the seed?
One of my best friends at the time and I spent everything we had on a 6 color 2 station screen printing press and started a brand out of his garage. The brand didn’t last, but learning how to use my hands to print got me off. 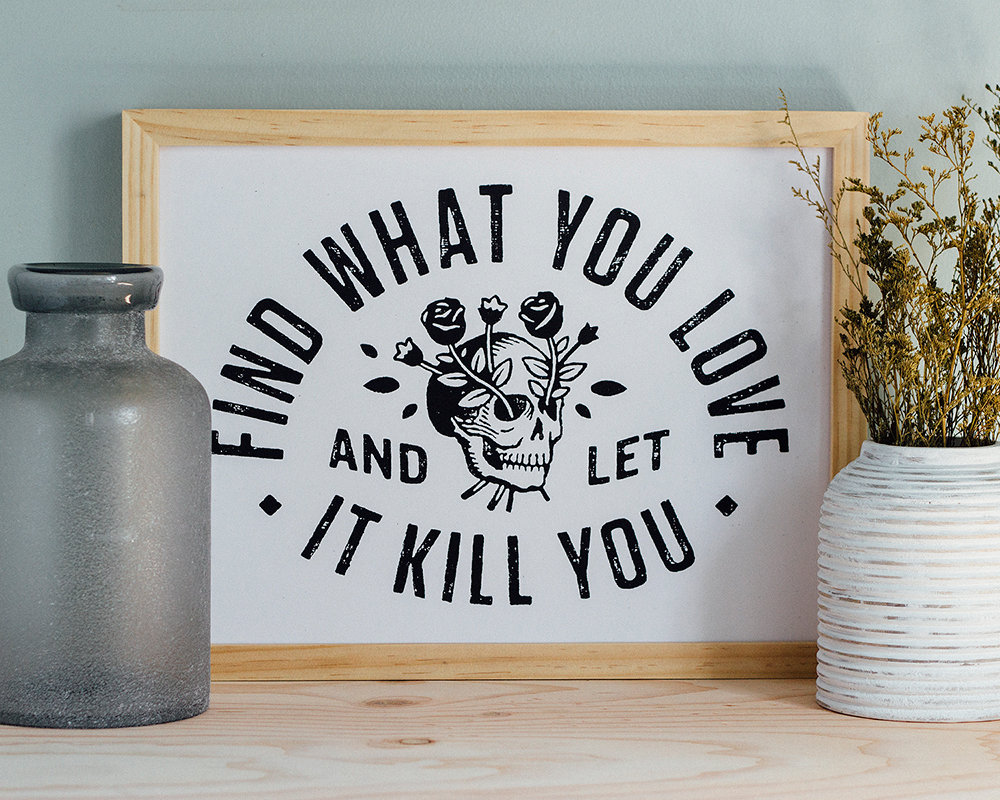 Did you have any early artistic influences when starting out?
I didn’t really develop a taste for artistic influences until I was older. TV, movies, skateboarding, books, and stories were my biggest influences. Watching cartoons, I’d get attached to the cool image that the characters had and wanted to make that one day.

For example when I’d watch Spider-Man, I’d just want to make my own hero, I didn’t really care who Stan Lee was at the moment. That kind of applied to everything, I was a dreamer… Now, my biggest influences aren’t even designers, they tend to just be anyone who is trying to perfect a skill and surround themselves with people who are better than them.

“I TRY NOT TO OVER-COMPLICATE MY FUTURE OR AMBITION ANYMORE. I’VE SIMPLIFIED IT TO ONE SIMPLE CONCEPT: JUST GET BETTER.”

That’s the beauty of inspiration, you never know in which direction it might hit you.
The hard part is listening when it does hit you.

I always felt like inspiration will come to you when you least expect it.
Exactly. I never knew I was being inspired. I’d just see something and ask, “How do I do that?” Then you try and figure it out.

Fast forward some years now, you now find yourself living in San Francisco. What sparked this decision?
I was done with art school and getting close to opening my own studio in Southern California, which was the safe plan. Then I got an email from Benny [Gold] about a design position and that was terrifying. So I jumped.

Were you able to make any type of creative advances by moving to a city full of creatives like San Francisco?
This is going to contradict my answer earlier, but it was major. Like I said before, I always believed in surrounding yourself with those who are better than you and this city is filled with some of the best. Back home I was one of the only creatives in our circle outside of school, up here you can’t walk a block without running into someone who has a gallery opening “on Friday.” It’s impossible for you to not be affected by that.

Has there been any drawbacks for working for brands/companies as opposed to freelancing?
There are always pros and cons with everything. For years, I was running my own ship and owning my schedule, once you’re on payroll you need to clock into someone else’s ship. I got really used to working late, I mean from dinner until about 3 in the morning was primetime. I miss having that. But on the other side, I believe you stunt your growth only working for yourself. You need mentorship on some level, or a framework that offers growth that you can’t give yourself.

I know some people might feel some sort of creative constriction while working under somebody else. Was it ever challenging trying to adjust to someone else’s creative vision?
Not at all. That’s one of the clear differences I’ve found between “artists” and “designers.” I love making rad stuff, but at the end of the day, it’s a job and I understood early on that I’m there to solve their problems, not my own. I’ve been lucky enough to work with/for very talented folks who I respect and saw value in learning from them.

So now you’ve been dabbling into creating some of your own products. Some of your more notable items such as the “Love Kills” pin. How’d that come about?
I’ve been juggling side projects and trying to make my own product since day one, but in the last few years, I’ve been approaching it a little more clearly. Pins are the new black now, which makes it a little less fun, but knick knacks never get old… Funny story about the Love Kills pin, it was made for a client that didn’t make the cut. I loved it too much to throw it away. I added the phrase to the artwork and placed an order. It has kind of turned into a mantra for heartbroken Tumblr girls, which never was the plan.

“I BELIEVE YOU STUNT YOUR GROWTH ONLY WORKING FOR  YOURSELF.”

If I’m not mistaken, there has been some people who have decided to get that graphic tattooed on themselves. How do you feel about having such a visible commitment by someone you don’t even know?
It’s odd. I mean, you make something and a complete stranger decides to marry it to their skin forever. I’ll never understand it. I appreciate the hell out of it, but they are crazy. 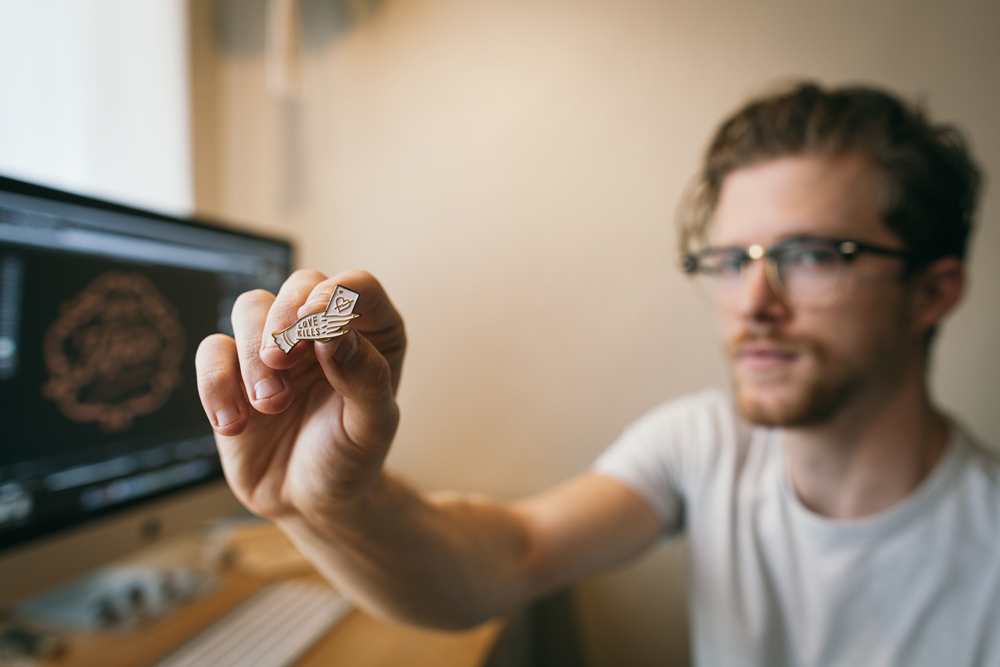 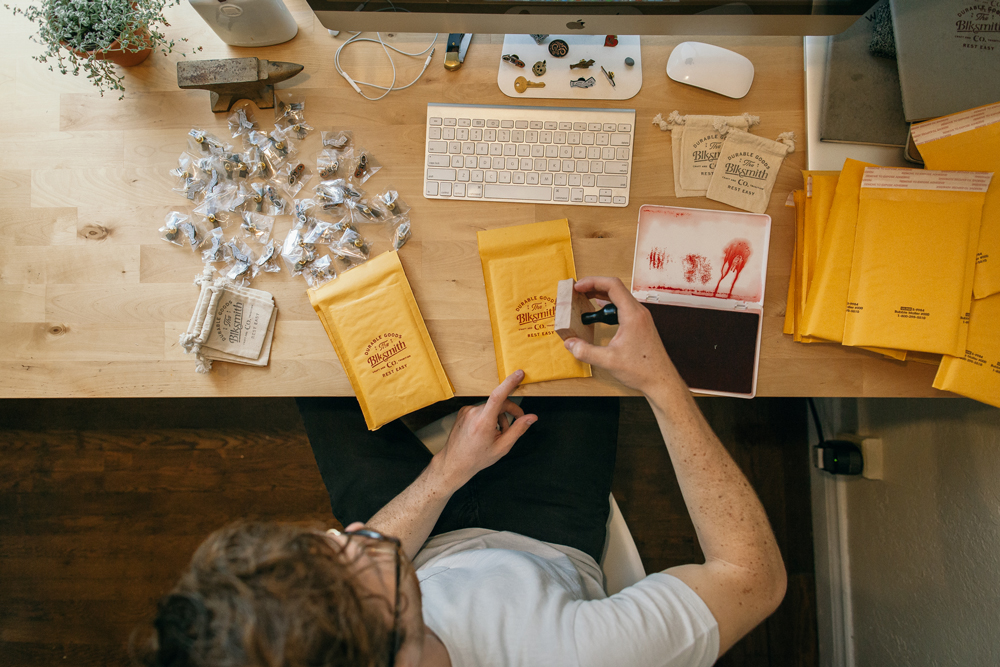 Now, with 2015 coming to an end, do you have anything planned for the new year as far as work goes?
I’ve been trying to figure this out lately, and I try not to over-complicate my future or ambition anymore. I’ve simplified it to one simple concept: Just get better. The rest will fall into place… I have a lot of exciting things in the works, probably more than I can chew. I think I like it that way.