Behind the Shirt :: The Story of D.B. Cooper & the Most Notorious Unsolved Airborne Heist

At The Hundreds, we love telling a good story—the type of story that keeps you on your toes and makes you sleep a little uneasy at night. In this edition of Behind the Shirt, we’re retelling a story that can be best described as James Bond meets Unsolved Mysteries meets... the Pacific Northwest? It’s an investigation that still remains the only unsolved air terrorism case in commercial airline history and the most costly inquiry the FBI has spent on for a man who had been on the Most Wanted list for 45 years. This is the story of D.B. Cooper.

New York Magazine’s contributing editor Geoffrey Grey said it best when he described why the mysterious man behind the airborne heist proved so intriguing: “Whoever Cooper was, and whatever his motive really was, he achieved what we all want and rarely have: the courage to be bold, and the guts to break free. Once Cooper’s caught for good, so are we.”

This tale begins the night before Thanksgiving in 1971. A man by the name of “Dan Cooper” bought a ticket at the Northwest Orient’s desk in Portland airport for a flight to Seattle—a ticket purchase that would never warrant explanation because traveling near the holidays is typical. However, Dan Cooper—or more commonly known as D.B. Cooper—did something that was quite unusual, and leaves us scratching our heads to this day.

A little after the flight took off, Cooper ordered a bourbon and soda and passed the flight stewardess a note. She absentmindedly slipped it into her pocket, assuming that Cooper was a businessman potentially hitting on her. Cooper then casually said to her that she should probably read the note, as he alleged he had a bomb in his suitcase and needed $200,000 in cash (in 2017 that would be approximately $1.7 million) and four parachutes or else, as he said, “I’ll do the job.” In return for the compensation, Cooper vowed that passengers would arrive to Seattle safely and flight crew members would get meals during refuel. After proper coordination with the FBI, money was given and the passengers were evacuated.

“Whoever Cooper was… he achieved what we all want and rarely have: the courage to be bold, and the guts to break free.”

To be honest, the story could have ended right there due to the sheer ludicrousness of the situation; a man takes hostage of a plane of approximately 40 people by handing a note to the stewardess while drinking a goddamn bourbon and soda.

But, as we know, life is stranger than fiction. Cooper ordered that all flight crew—except for the two pilots, flight engineer, and a flight stewardess—to leave the plane. Those remaining were intended to help fly him to Mexico City, with a stopover at Reno for gas. After takeoff, Cooper requested that the one flight attendant, who was with him, join the crew in the cockpit. Soon after, Cooper lowered the airstairs (the stairs used to enter and exit the airplane) and parachuted out of the airplane into the cold, stormy night—with $200,000 cash in hand.

And that was that. No missing body, no magical reappearances 20 years later. The FBI spent more than 40 years trying to find clues about where D.B. disappeared to, but there were only two: in 1978 there was an instruction card on how to lower airstairs found on the side of a logging road in Washington; and in 1980, $5,800 worth of the requested bills were found by an 8 year old boy in the Columbia River near Vancouver.

“The FBI learned of the crime in-flight and immediately opened an extensive investigation that lasted many years,” the bureau said on their website. “Calling it NORJAK, for Northwest Hijacking, we interviewed hundreds of people, tracked leads across the nation, and scoured the aircraft for evidence. By the five-year anniversary of the hijacking, we’d considered more than 800 suspects and eliminated all but two dozen from consideration.”

From the FBI’s page on D.B. – Left: Cooper’s J.C. Penney tie, which he took off before jumping out of the plane, which had a DNA sample; Right: A few of the stolen bills found by the boy in the Columbia River.

Overnight, this bizarre situation made Cooper a cultural phenomenon. Fifteen Cooper-inspired plane hijackings happened the year after (thankfully all were unsuccessful). Multiple books, TV shows, and movies used D.B. Cooper to create “what-if-I-survived” plot lines and even spun him into a fictional character who confessed his crimes. What’s even crazier is that there is a music festival in Washington completely dedicated to him for no other reason other than that Cooper is a badass. Even DOOM, who we collaborated with earlier this year, references D.B. in his song “Hoe Cakes” (“Average emcees is like a TV blooper / MF Doom, he’s like D.B. Cooper / Out with the moolah”).

There is something quite complex about Cooper. He was a gentleman’s robber who wanted the flight crew to have meals during the heist—a courteous hostage taker who tipped the attendants for the bourbon and soda he was sipping. These contradictions may make your opinion on him paradoxical as well: should we honestly be glorifying a man who did something so reckless?

A local resident who lives near the area where Cooper supposedly parachuted out of told New York Magazine that there’s something truly special, even heroic about him. “Folks are actually pulling for this man. That’s all anybody wants to talk about. I hear it all day long. ‘Hope he made it, he deserves it, hope he gets away with every nickel.’ Like he’s some kind of Robin Hood character.”

“Average emcees is like a TV blooper / MF Doom, he’s like D.B. Cooper / Out with the moolah.”

It’s as if people think about Cooper as a regular guy rather than, you know, someone on FBI’s Most Wanted list for a full 45 years, or a crazy daredevil who probably never lived another day due to the idiocy of parachuting out of a plane in a raincoat in pitch black night.

Well, if you’re still curious about what happened to him, (which you probably are!), we recommend watching Buzzfeed’s series: Buzzfeed Unsolved – True Crime, The Strange Disappearance of D.B. Cooper. It’s incredibly entertaining and they give some great in-depth coverage of what potentially happened to Cooper. In addition, Geoffrey Grey wrote a whole book called Skyjack: The Hunt for D. B. Cooper, and also penned a Sunday Review for The New York Times called “A Mystery We Really Don’t Want to Solve” which talks about the fandom, phenomenon, and possible suspects.

Our Fall 2017 “Seen” graphic T-shirt was directly inspired by D.B. Cooper: we used the FBI’s composite drawing of him and paired it with the mildly racist 1987 Bones Brigade cult skateboarding film, The Search for Animal Chin. HAVE YOU SEEN HIM, THOUGH? 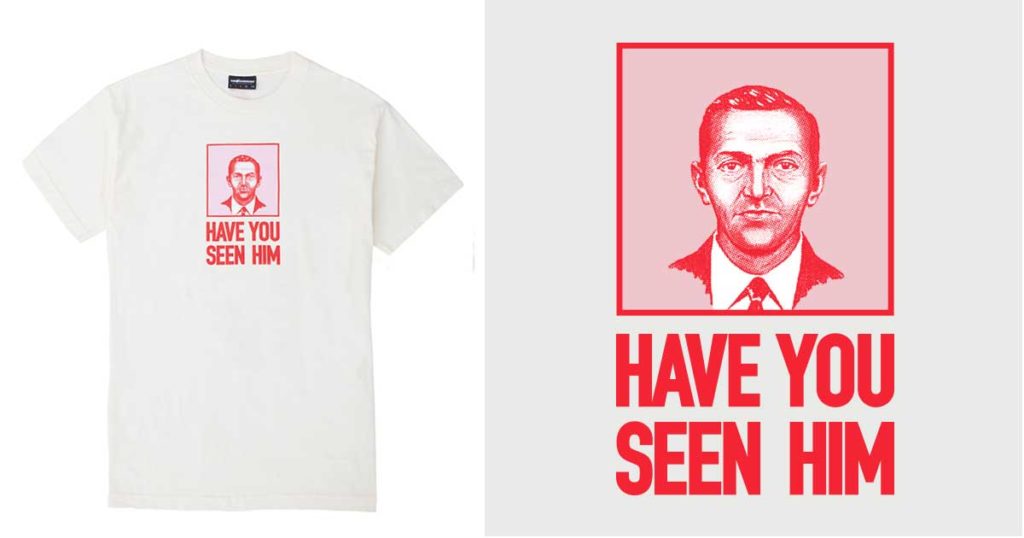 Words by Namrata Mohan, with help from The Hundreds Staff.