On Sunday, March 31, 2019, Nipsey Hussle was tragically killed. A close friend of The Hundreds for nearly a decade, Neighborhood Nip was senselessly murdered in front of the business and community he had worked so tirelessly to build up. The monumental loss will be felt for generations to come, as the impact Nipsey had on Los Angeles and the culture as a whole was impossible to quantify. The Hundreds family sends our love and deepest condolences to Nipsey’s family and friends and promises to continue telling the incredible story of this true icon and king, a role model we can all look to for guidance now and forever. THE MARATHON CONTINUES.

This article was originally published in April of last year, long before the election, when some of us still thought Bernie had a chance and the majority of us were still laughing at the very notion of Trump’s rise. We’re revisiting it today in light of the inauguration—a reminder that as a culture, we can and will fight back, and that our music will forever have a place in politics.

As we, as a nation, inch closer to the polarizing political battles waiting for us, artists from all over the spectrum voice their opinions on the issues at hand. Some use their platform to touch upon the police brutality rampant within black and brown communities across America—issues that have been especially highlighted this year by prominent cases in the media (Eric Garner, Tamir Rice, Rekia Boyd, Alex Nieto, Freddie Gray, and unfortunately many more). While others have made it blatantly clear which candidates they just aren’t rocking with (more on this below).

Hip-hop has never since the days of “Fight the Power” and the Stop the Violence coalition had a problem with not only articulating, but impacting the social injustices that many of its adherents are forced to experience living in this country. Rappers were some of the first celebrities to dedicate their art towards raising awareness and combating the AIDS epidemic that took so many lives in the ’80s and early ’90s . It was a very early campaign by many rappers that helped popularize and push the highly successful disinvestment from apartheid-era South Africa. Therefore, it should come as no surprise that artists today are following in the footsteps of the OGs before them, and helping usher—in their own way—opportunities for the new generation to reconnect with their activist roots. 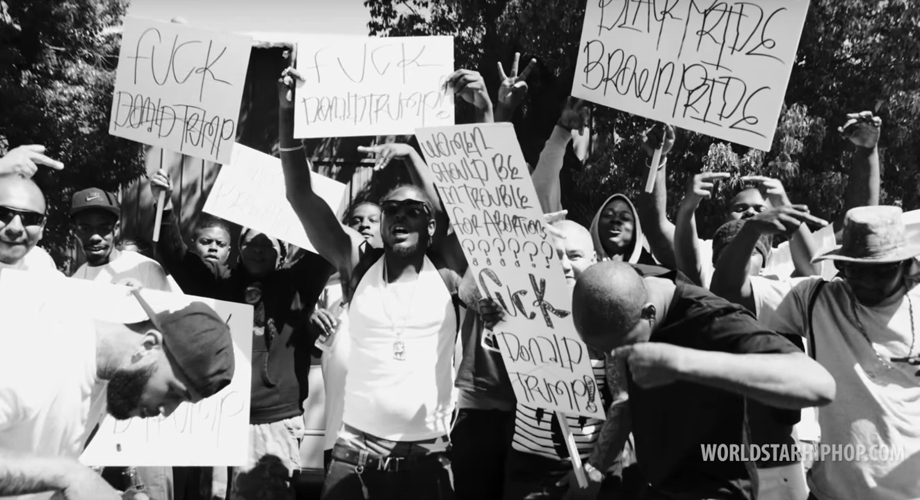 The growth of the former rebel genre has had it eschewing its South Bronx heritage for corporate accessibility to the establishment. This is more obvious now than ever as we see frontrunners pander and pose for pictures with rap stars in the hopes of channelling some youthful coolness and social capital towards political campaigns otherwise devoid of any connection with the young in America. Don’t believe us? Just look at how frequently rap endorsements are announced via the respective candidates’ social media.

To remind ourselves how much hip-hop will forever have a stake in politics, below are 5 songs in which rappers let it be known where they stand when it comes to major issues dealing with their community.

We all have a weird fascination with conspiracy theories, let’s be honest. Terrorist threats made me realize that the Carson rapper Ab-Soul might have frequented the same Illuminati forums late at night on a quest to discover what could explain what’s going on in this world that we live in. Jhene Aiko takes inspiration from a young Amil with the hook for this record. In the midst of Ab’s adventure through discussion boards from the late ’90s, his partner Danny Brown delivers a blistering performance detailing the limitations of his ghetto environment and a life of crime being the only options for a young boy growing up in his situation in Detroit.

Alls my life I had to fight, nigga

There is a very specific type of song that many have in mind when they think of a protest anthem. Maybe something folky, along the lines of Woody Gurthie or Pete Seeger. Or perhaps even more poignant and in-your-face like the dark tragedy that is “Strange Fruit.” This might be why some people were surprised that many within the Black Lives Matter movement adopted the rallying cry of Compton rapper Kendrick Lamar’s hit “Alright.” To do so, however, strongly ignores the artist’s musical genealogy and relationship to the influential Black Power movement of the late ’60s and ’70s that impacted our parents with anthems like James Brown’s “Say it Loud, I’m Black and I’m Proud” as well as the beautiful conceptual masterpiece that is Marvin Gaye’s “What’s Goin’ On.”

No other song breaking through the mainstream showed a more aggressive sign of the resilience of blackness than “Alright,” and the video directed by Colin Tilley and The Little Homies took it 10 steps forward. An album centered on blackness and self-love, and simultaneously held conflicting views on respectability politics—all of which perfectly encapsulate the current coming of age struggle between the young and older generations, within the fight for civil rights.

Hold up, I fuck with Mexicans

In the racially-charged environment that is the city of Los Angeles, there’s nothing powerful and beautiful to see young black and brown people from various gang and tribal affiliations coalesce together in the streets for our mutual disdain for one figure: Donald Trump. Very much a modern ode to the we all in it together message delivered by 2Pac in the classic “To Live in Die in LA,” the Blood from Bompton and the slim Crip from Crenshaw team up to drag the rude New Yorker through the ringer while marching through the streets of LA (a video shoot that was later shut down by the LAPD, it features prominent views of Fairfax, right by RSWD/The Hundreds Los Angeles). The two rappers let it be known that the streets are watching and don’t approve, as well as sharing their mutual love for the Mexican community vilified by the Republican frontrunner.

Bush robbed all of us, would that make him a criminal?

And then he cheated in Florida, would that make him a seminole?

As we witness the final months of the Obama Administration that helped shape the early adult years for many millennials, it’s very important to note the records of the time that really reflected the high feeling of hope that surrounded the freshman senator from Illinois. With lyrics reflecting the nationwide discontent felt by many Americans as they witnessed the collapse of the financial system towards the end of the Bush years, Jeezy and Nas with “My President” musically set the stage for the optimism expressed by many with the election of the first black American to the Oval Office. The Atlanta songbird from his appropriately-titled The Recession album dropped in 2008, which showcased his ability to juxtapose his grand role as the voice of the streets with his newfound advocacy for a less gray Obama. Wow, how the years have gone.

The young golden boy on Def Jam has no problem illustrating his frustrations with the Long Beach Police Department in this passionate diatribe against the abuse many denizens of these Southern California streets have to face when dealing with the police. Released off of his first project with Def Jam, produced by head A&R No ID with his own special place in rap history (“I Used To Love H.E.R.”), “Hands Up” finds Vince discussing the realities for many locked up within the American legal system; a system in which a police force finds itself fixated on the the maintenance of a high conviction rate rather than the upholding of the law. In the midst of his anger, Staples still finds time to acknowledge recent unarmed victims of this American epidemic.

Devin O’Neill
Today’s landscape often feels bleak for content creators. But Nipsey Hussle offers us a different story, focusing on his roots and community to built a solid foundation that will outlast the hype c...
HIDE COMMENTS