Christmas and horror are two great tastes that taste great together. Claustrophobia sets in around mid-December, when it’s frozen outside and you’re huddled indoors with volatile monsters you spend the rest of the year trying to avoid, so “Christmas Horror” as a genre was always going to happen. Starting with HOME FOR THE HOLIDAYS (1972) and running up through last year’s ALL THROUGH THE HOUSE, there’s a long and deeply checkered tradition for Christmas horror. Here are five films to settle in with when the nights start getting longer. 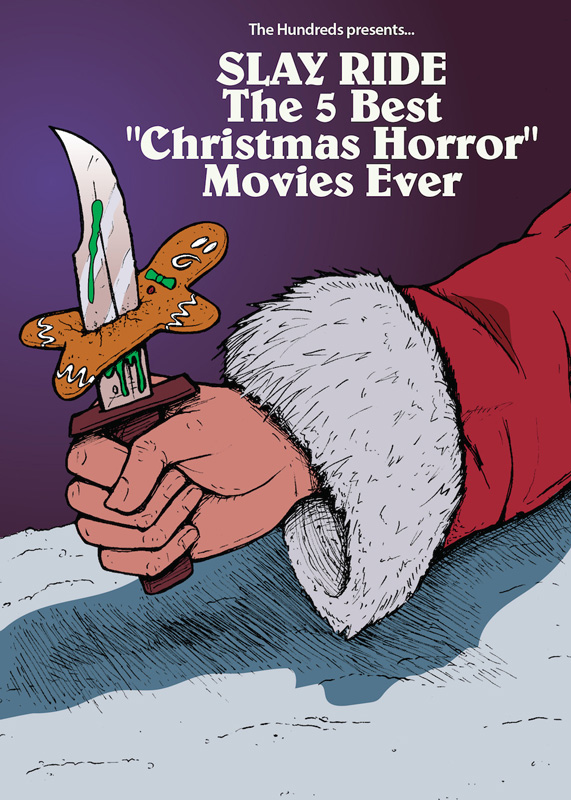 ELVES is the most shit-the-bed insane Christmas horror film ever made. I’m not even going describe the plot to you here. Instead I’ll just throw out some words: Nazis, alcoholism, pagan rituals, eugenics, sex scenes involving electrocution, candy cane murder, a film soundtrack made by a Ukranian jazz composer, and a fetus. Just classic Christmas movie stuff. I wish I could describe ELVES as being either good or bad, but it’s like trying to assign value to a burning van filled with bootleg Russian sex toys – it’s not on me to have an opinion about this rare and unique sight, you know? Plus you’ve got Grizzly Adams himself, Dan Haggerty, as a homeless cop moonlighting as a mall Santa and sobbing into stolen snack cakes. Force your family to watch this with you this Christmas. Do this for me.

TRICK ‘R TREAT director Michael Dougherty gave us last year’s KRAMPUS, thus solidifying his apparent position as “Dude Who Will Do Holiday Horror Shit Forever, Probably.” KRAMPUS follows a family as it contends with an ancient German holiday demon that attacks families who have lost their Christmas spirit and punishes them for not being happy. It’s a welcome departure from the: “donger dressed up as Santa Claus who started killing people” theme of the previous entries on this list, adding a bevy of supernatural holiday ghouls to aid Krampus in his unholy work—including gingerbread men, evil dolls, and a cross between a mime and the sandworms from Dune. KRAMPUS works in several ways that it really shouldn’t (not least the dialogue, which reads like it was written by committee), and it really commits to the horror aspect while acknowledging how fucking absurd it is. Spoiler: The ending contains the goofiest jumpscare you’ve ever seen.

I know what you’re saying at this point. You’re like: “Ugh, do a Christmas horror movie that took place after the Reagan administration,” and to that I say good point—let’s talk about how ALL THROUGH THE HOUSE is a perfect popcorn horror movie. The story follows a college student returning home for Christmas and unraveling her connection to the loads of Christmastime murders that constantly seem to take place in her hometown. You’d think she’d just stop coming home for Christmas, what with all the constant murder, but no dice. How many other Christmas movies can you name that feature hedge clipper castration? (No, really, because if you can name any others, send them to me immediately.) The gore is outrageous, the scares are fun, and the plot twists are so cartoonishly obvious that even while three sheets to the wind on rum punch, you’ll feel smug for having seen them coming.

Five words: greasy horror with a heart. An unstable factory worker begins to believe that he’s Santa Claus, which in his mind also translates to “the spirit of motherfucking yuletide vengeance,” and he murders a wide swath of naughty folks before getting his van chased off a bridge by an angry mob. There’s so much to love about CHRISTMAS EVIL, but my favorite part has to be the implication that witnessing a real-life reenactment of “I Saw Mommy Kissing Santa Claus” as a child will result in uncontrollable bloodlust later on in life. The end of the film is some magical realist nonsense that’ll burrow into your brain and ruin “The Night Before Christmas” forever. Watch the Lynchian holiday party nightmare scene from the movie here.

This is the greatest Christmas horror movie ever made, and never let anyone tell you differently. During Christmas break, a creepy phone stalker terrorizes a sorority and dispatches his victims while the corniest police department this side of the Haddonfield P.D. bumbles their way to the truth. BLACK CHRISTMAS was out here in 1974 making one of the best early-’80s slasher movies of all time, and even did WHEN A STRANGER CALLS four years earlier and four times better with “the call is coming from inside the house.” Margot Kidder’s a revelation as Barb, a sorority sister who’s 100% done with the killer’s bullshit, and the atmosphere of creeping terror is relentless. Most holiday horror movies succeed largely as a once-a-year novelty (much like Christmas music itself), but Black Christmas is up there with some of the best slashers ever made. It features a wide variety of wild kills, including plastic wrap suffocation, fire poker bludgeoning, and this stabbing with a glass unicorn.