PAY IT FORWARD :: CAITLIN CROSBY OF THE GIVING KEYS

A month or so ago, I was invited to speak on a panel amongst other entrepreneurs and community leaders.  I fielded questions about my career and shared wins and losses, but overall spent most of the time talking about all of the amazing things I get to see and do everyday.

But then it was Caitlin Crosby’s turn to speak. I’d heard of her name around LA; she being an actress and singer.  Caitlin started talking about her passion project, The Giving Keys, which is spirited around employing the homeless to engrave keys with positive words, which are then sold as jewelry and accessories.  It was a simple idea that spawned from an old hotel key that Caitlin used to wear around her neck.  She produced more to be sold at her concerts and fast noticed the necklaces outselling her albums at the merch table.  That was the first, of many, tipping points.

After enlisting a young homeless couple to join her mission, and seeing them establish a livelihood and residence off of The Giving Keys, Caitlin collaborated with the United Way, PATH, and Chrysalis to recruit a team of people off the streets.  Today, her pieces are sold in over 500 stores from Kitson to Nordstrom, with every notable celebrity brandishing their Giving Keys proudly, and a staff that gathers every day at their offices and workshop in downtown Los Angeles to continue paying it forward. 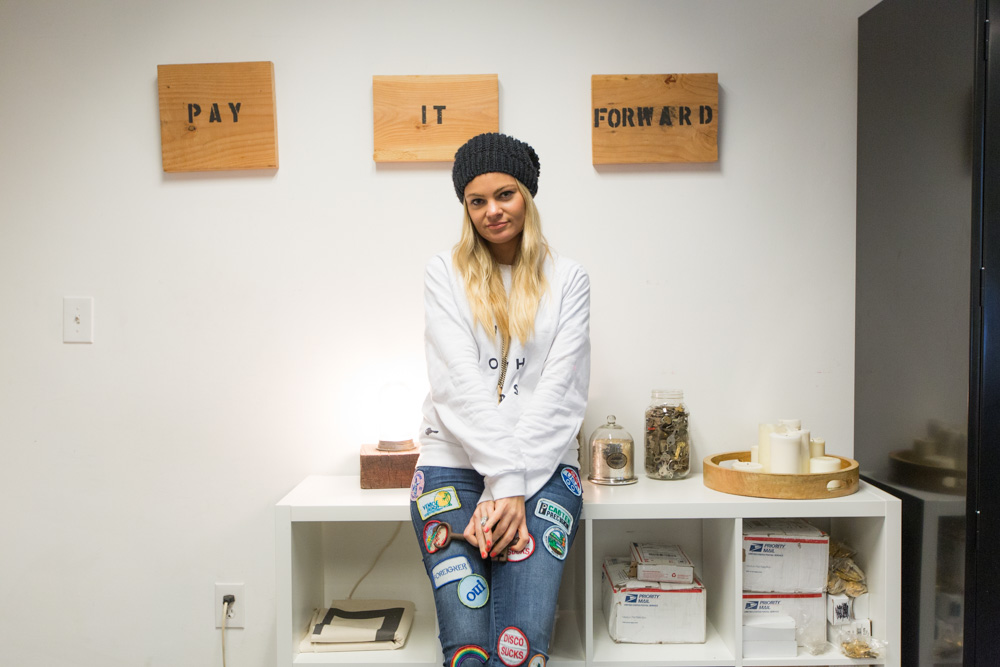 As the holidays near, it’s getting busy in the backroom, with the team hammering away ( literally) at orders for stores and customers. 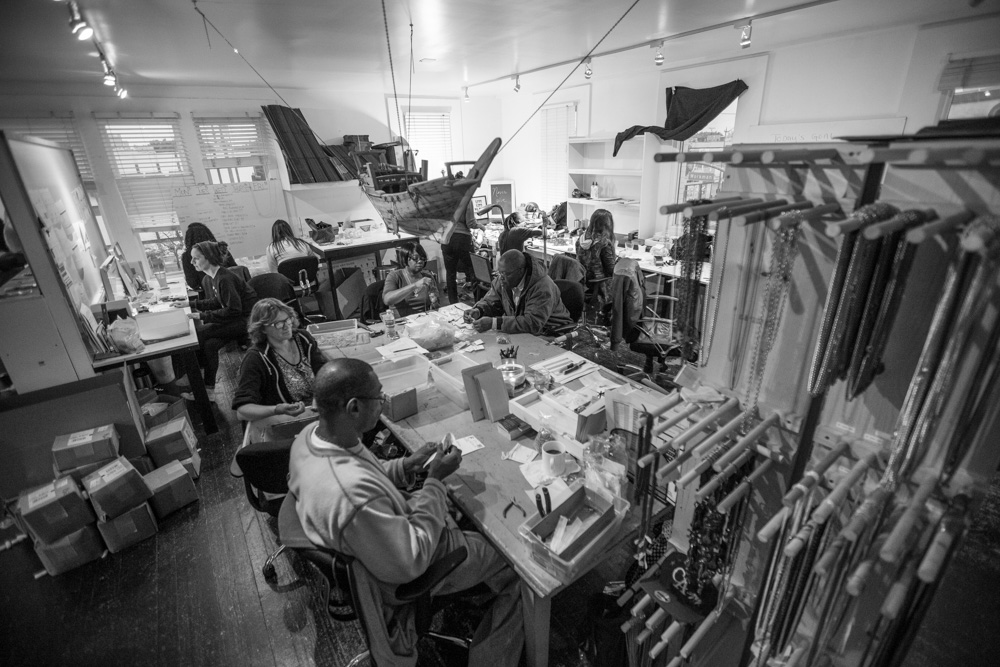 Every month, it’s on The Giving Keys to source upwards of 30,000 old keys into the room.  They use the Internet, eBay, and word-of-mouth to cast the net.  Of all the keys, only a portion are usable to be engraved upon.  Most are too shiny, haven’t been cut (therefore aren’t used), have the key company’s logo emblazoned on both sides leaving no room for customization, or even too “trendy.”  Like skeleton keys, which I guess – according to Caitlin – is like a thing now with necklaces. 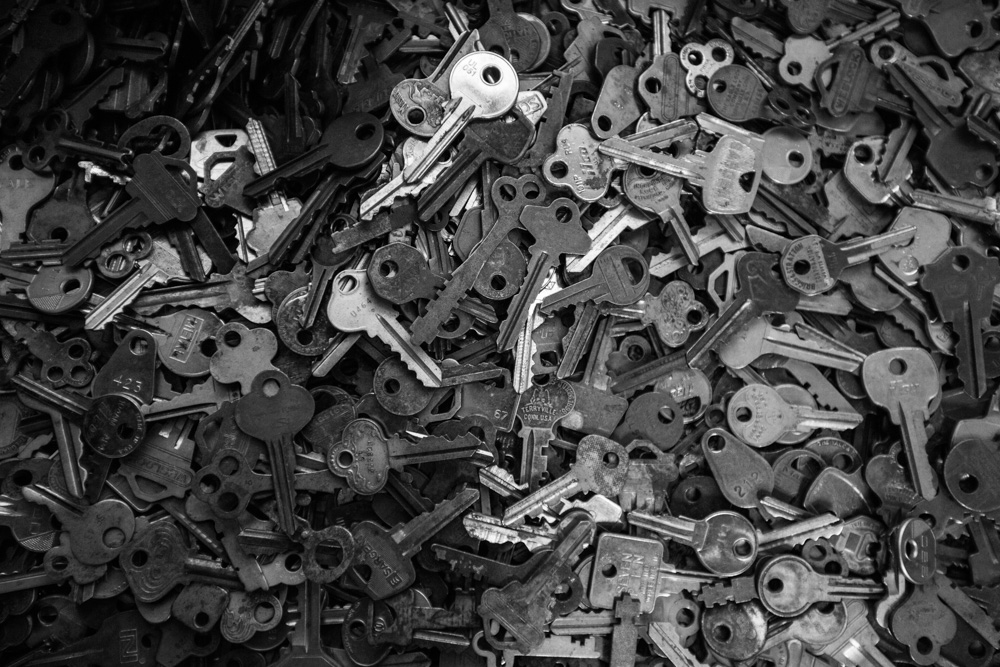 Caitlin and Mannix going over his orders for the afternoon.  Mannix is one of the head engravers here, which – as you’re about to learn – is a pretty intensive and skilled process.  It takes lots of training.  Most of all, as Mannix says, it takes mountains of patience (Which rules engraving out as a future career option for me). 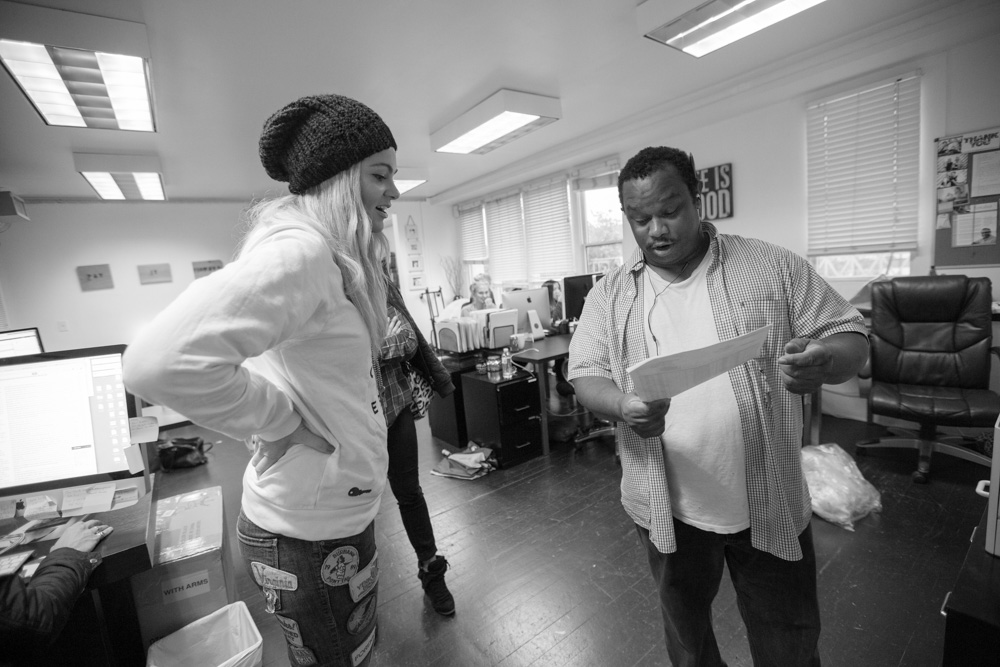 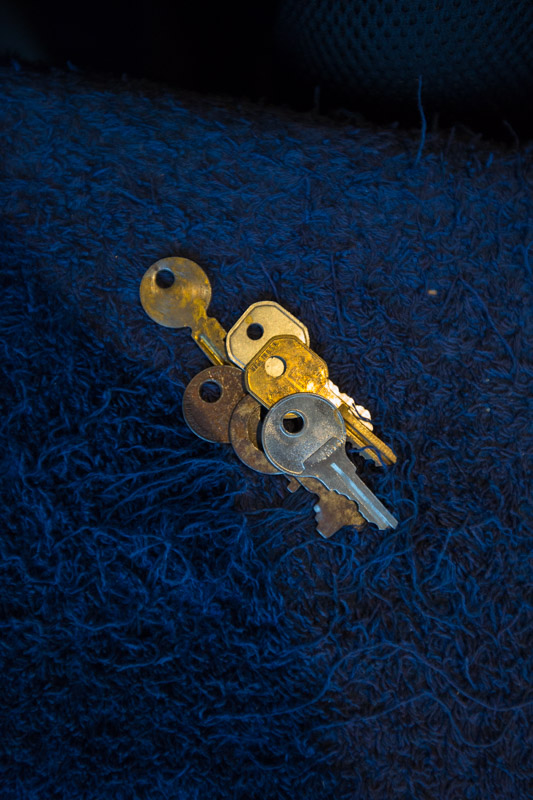 In the near corner of the workshop, Mannix’s “studio” is a makeshift bench overlooking a dark, rain-soaked LA street.  There’s a process by which he tackles each key, a trade secret I won’t give away.  But he pounds each letter into the target with precision. 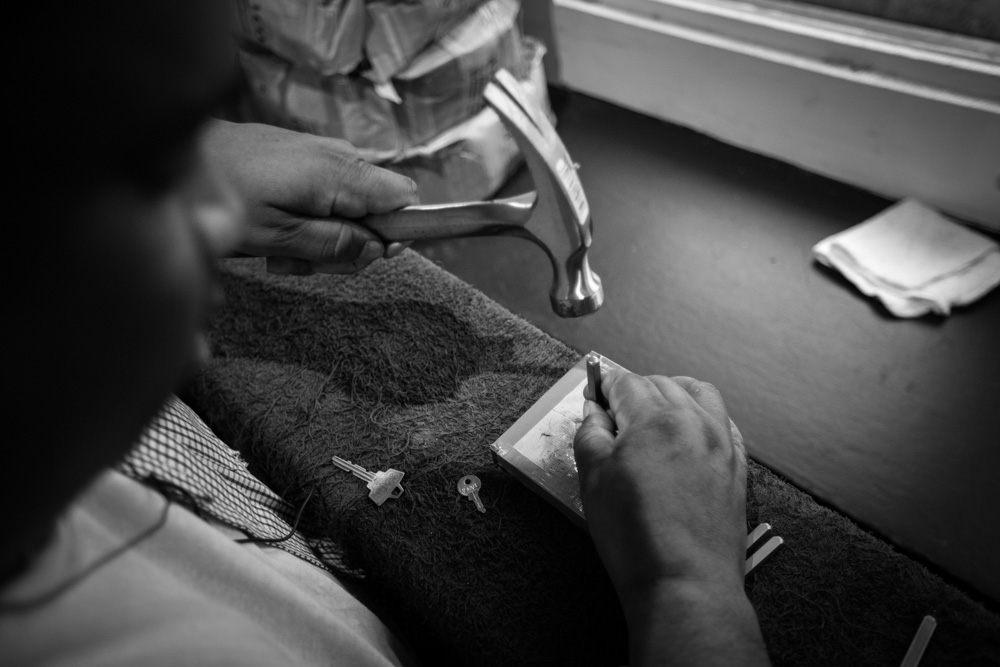 Each key is engraved with an inspired affirmation, something that speaks to the wearer.  Once you’ve incorporated the message into your life, you’re supposed to pass it on to someone else who you think could use it. 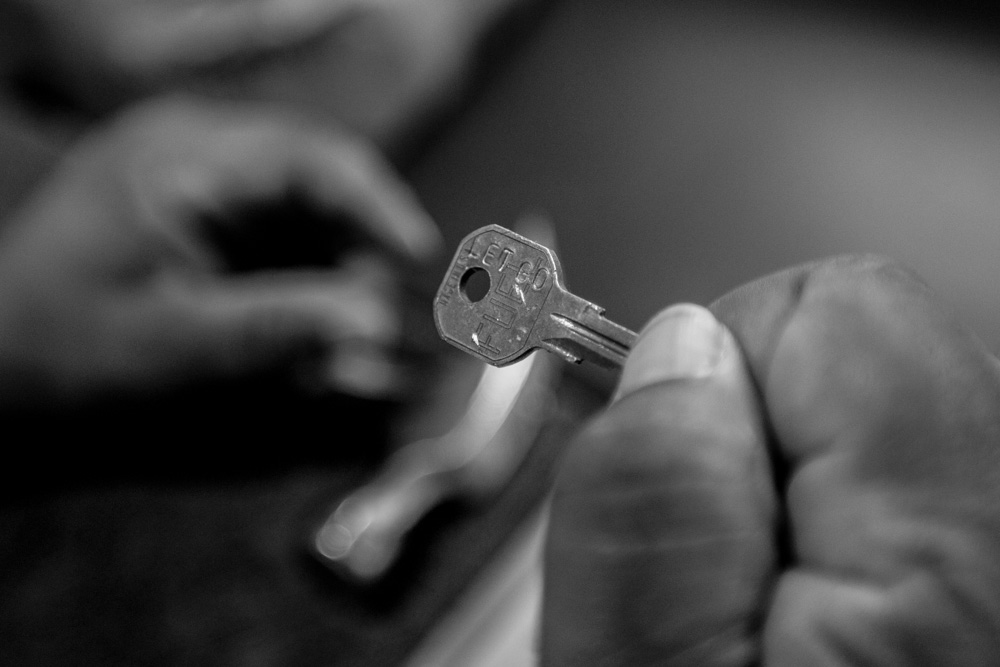 Everything is made by hand here.  Here is an example of POP that are on display in Nordstrom. 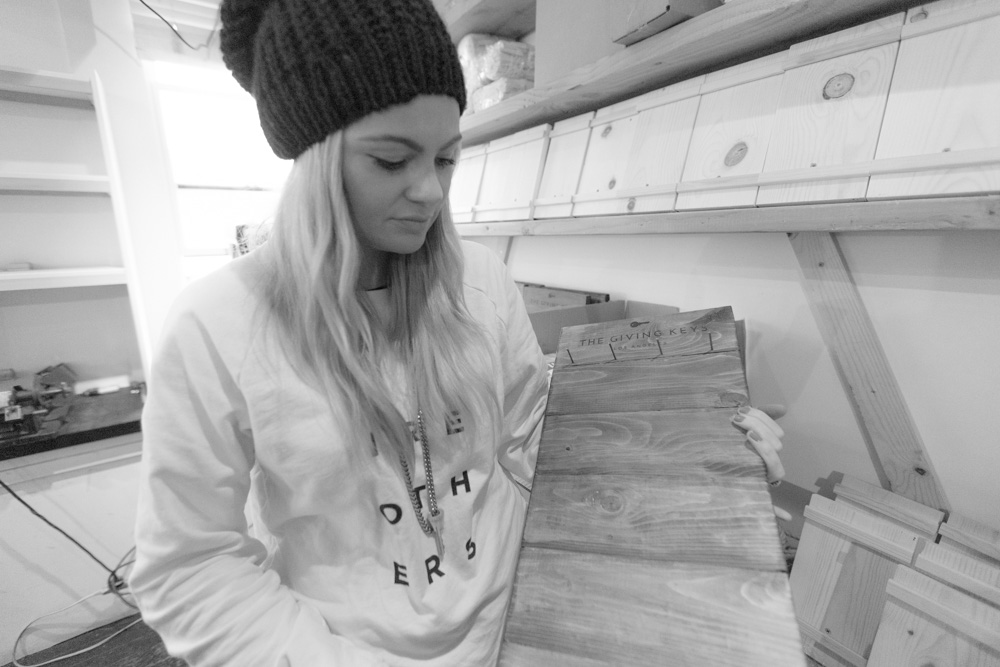 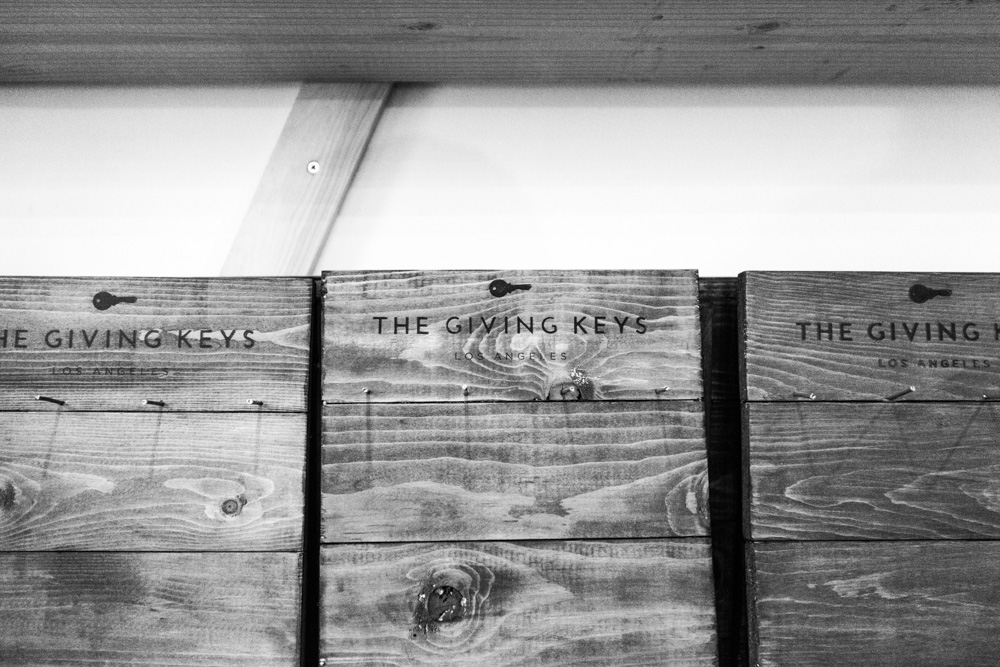 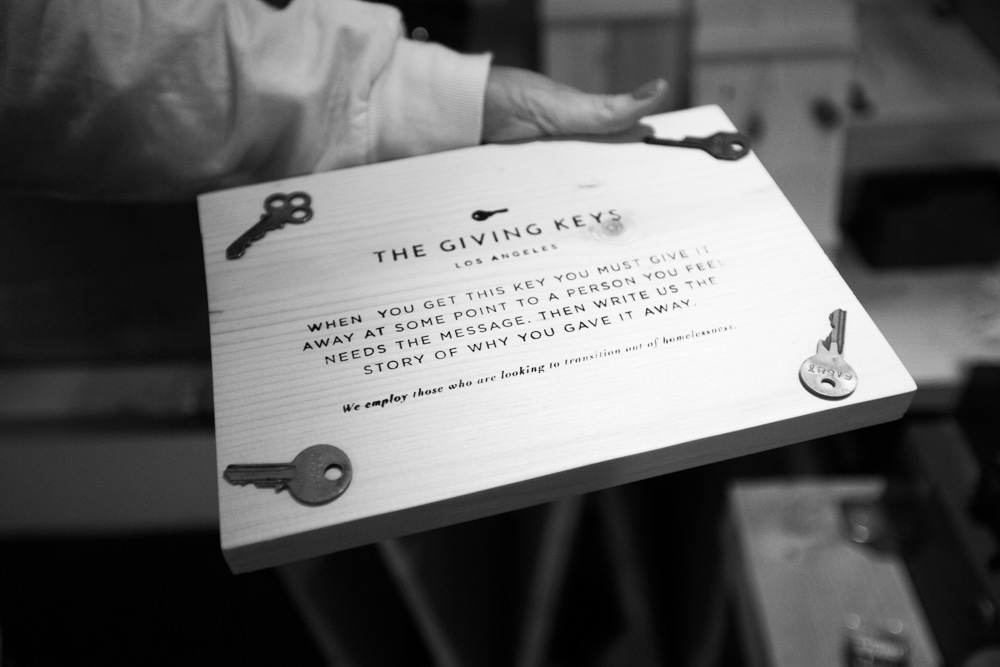 Kellie Williams is working on the Neverending bracelet.  She jokes that it has that name because the orders never end. 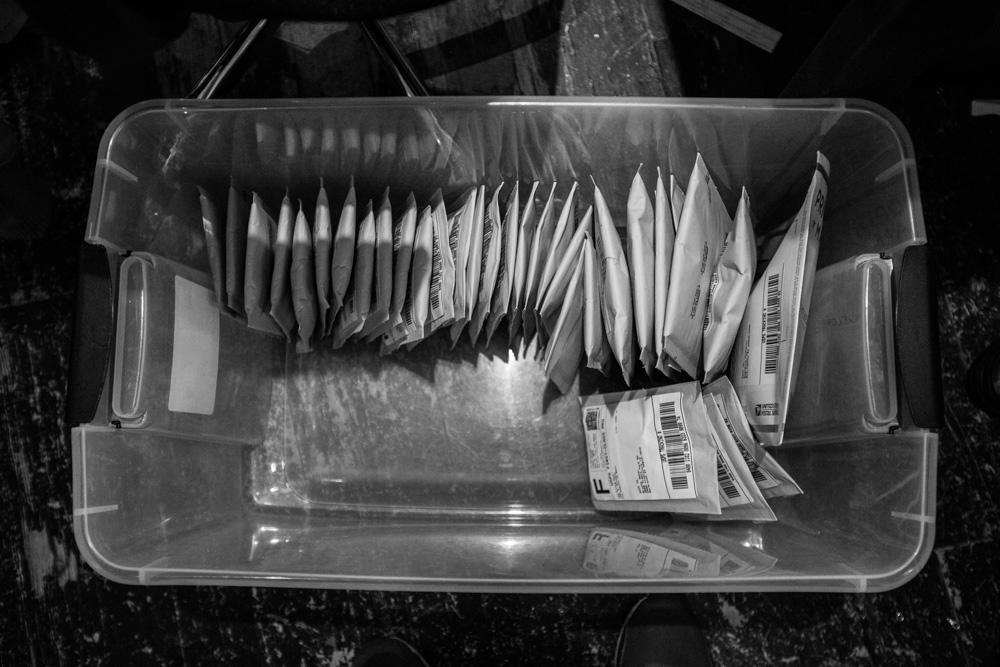 Good thing Kellie works fast.  It took her less than a minute to put one of those bracelets together. 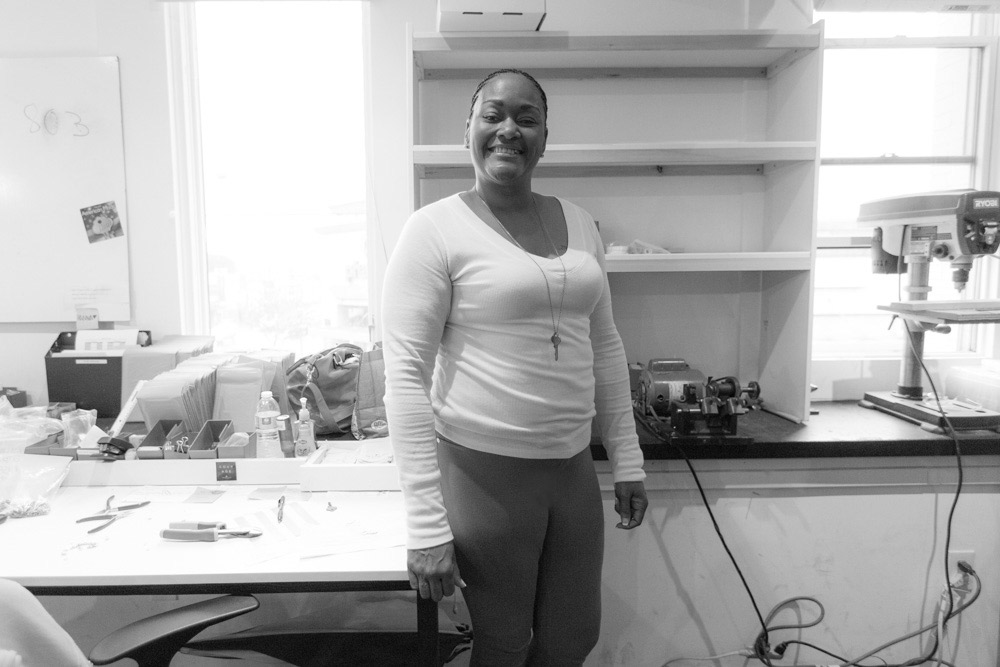 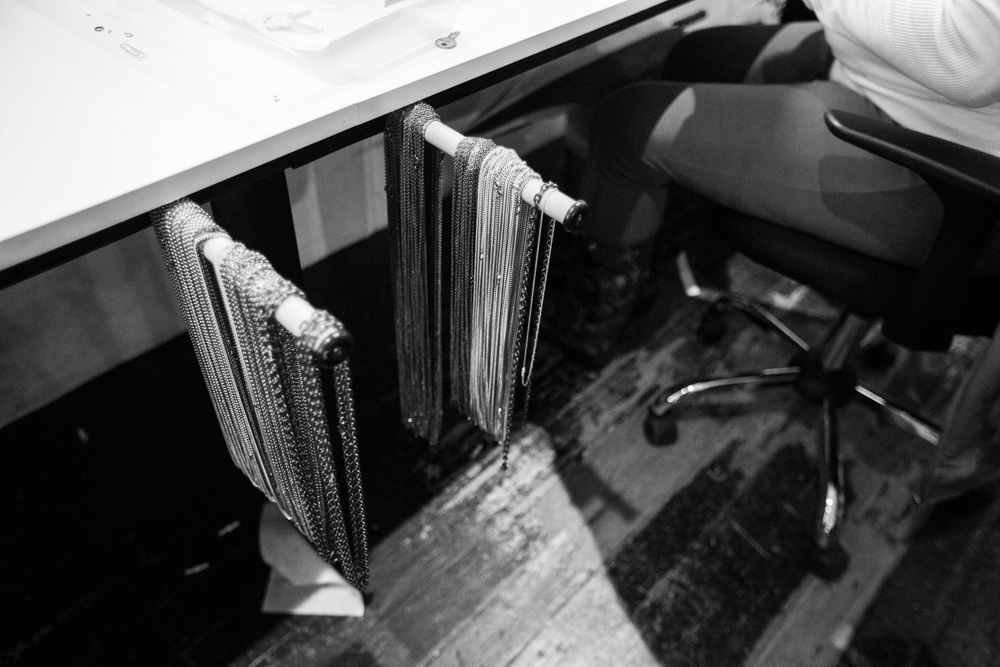 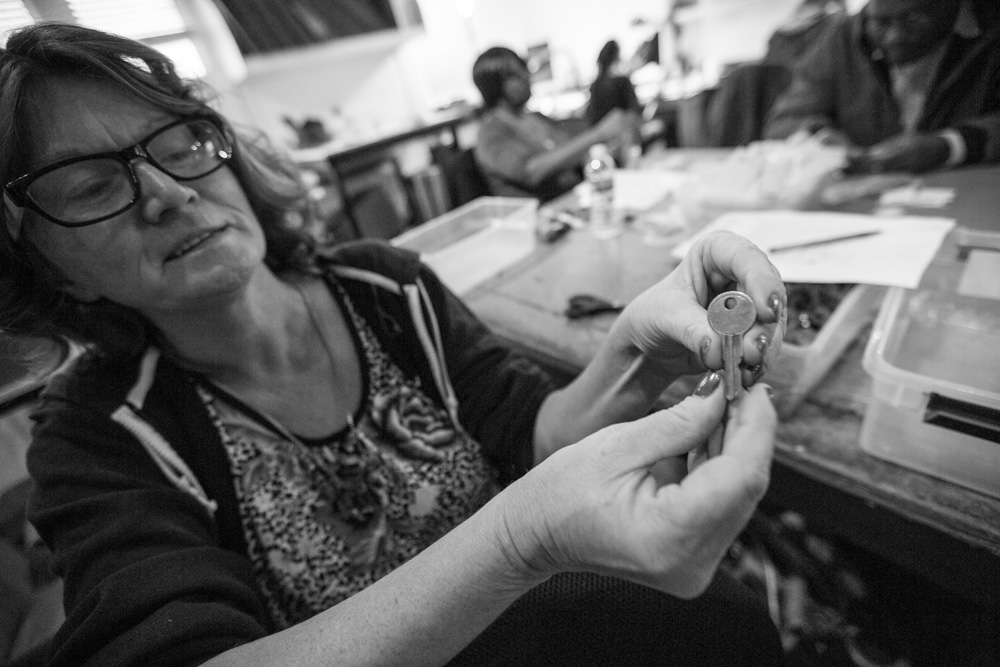 Darnell’s journey to The Giving Keys is chronicled on their website here, along with some other compelling stories of how Caitlin’s company has provided new lives for its employees. 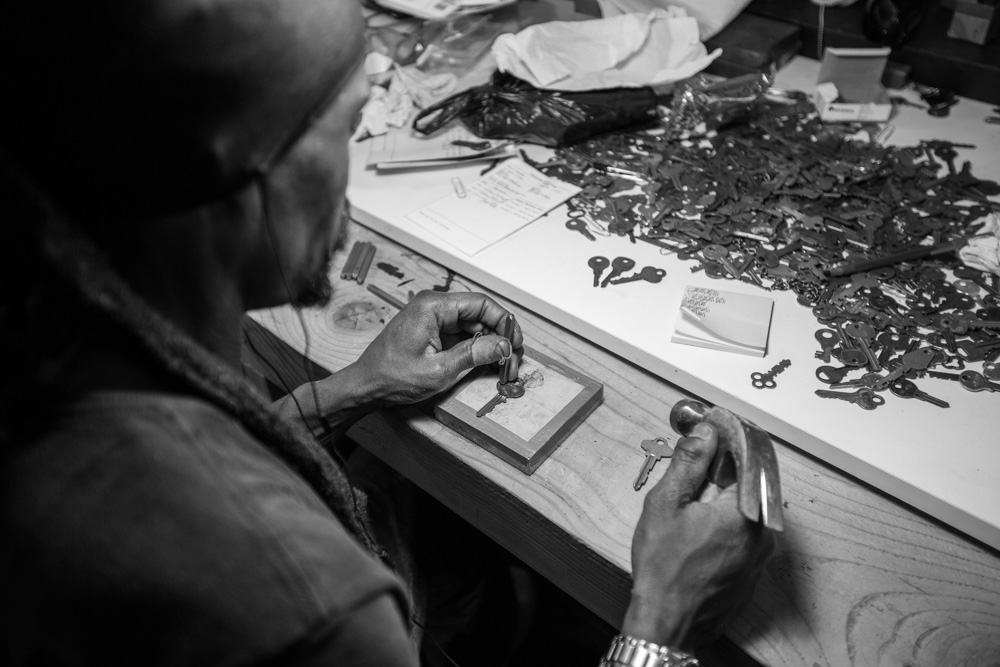 I don’t think Haley was ever homeless, but it’s hard to tell back here, and it doesn’t even matter, with everyone working together towards the same goal, side by side. 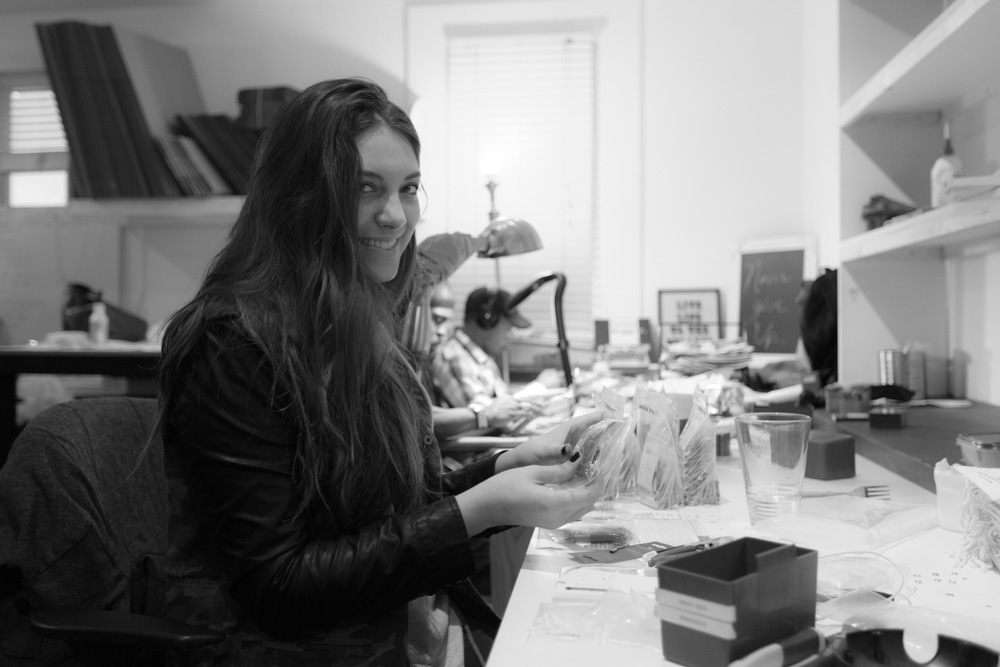 James joking around with the others at day’s end. 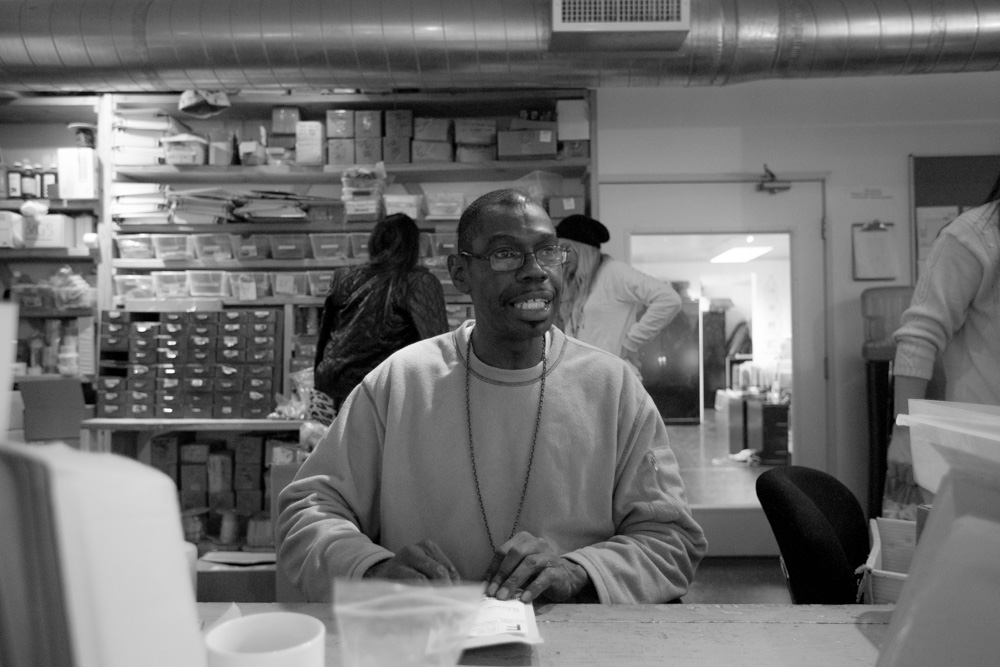 Alexa and Stanley, who just started here.  He’s already in the swing of things, packing and labeling orders for a big department store. 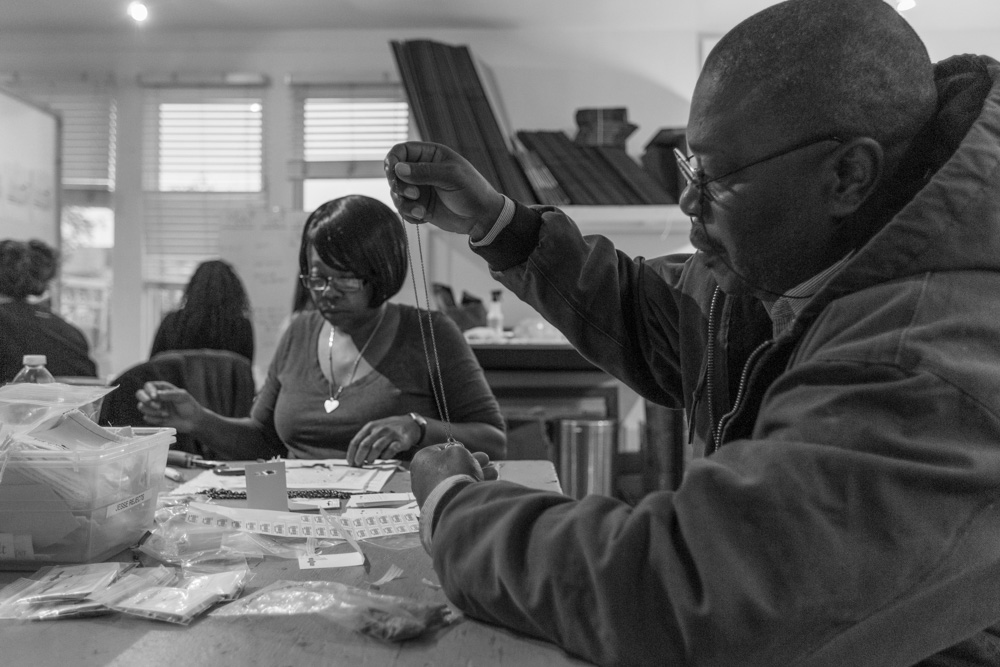 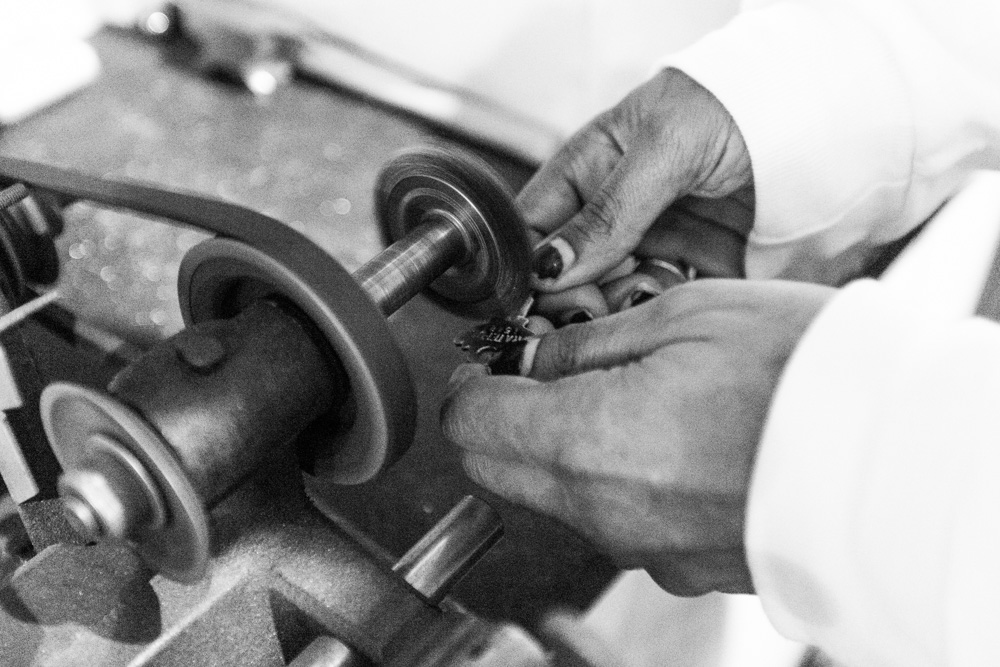 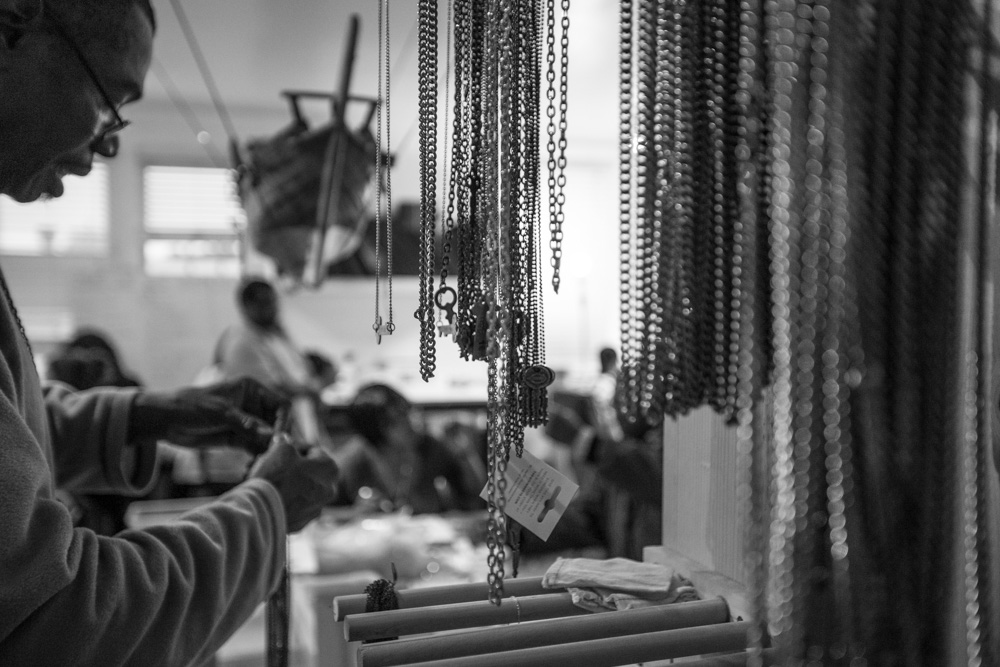 Although you can customize your own word, The Giving Keys has its most popular, core vocabulary.  As the sales team travels across the country, they’ve taken note how different cities and states are drawn to different statements.  For example, New York is drawn to “BREATHE” while the South goes for “FAITH” and the Northwest stays inspired with “CREATE.” 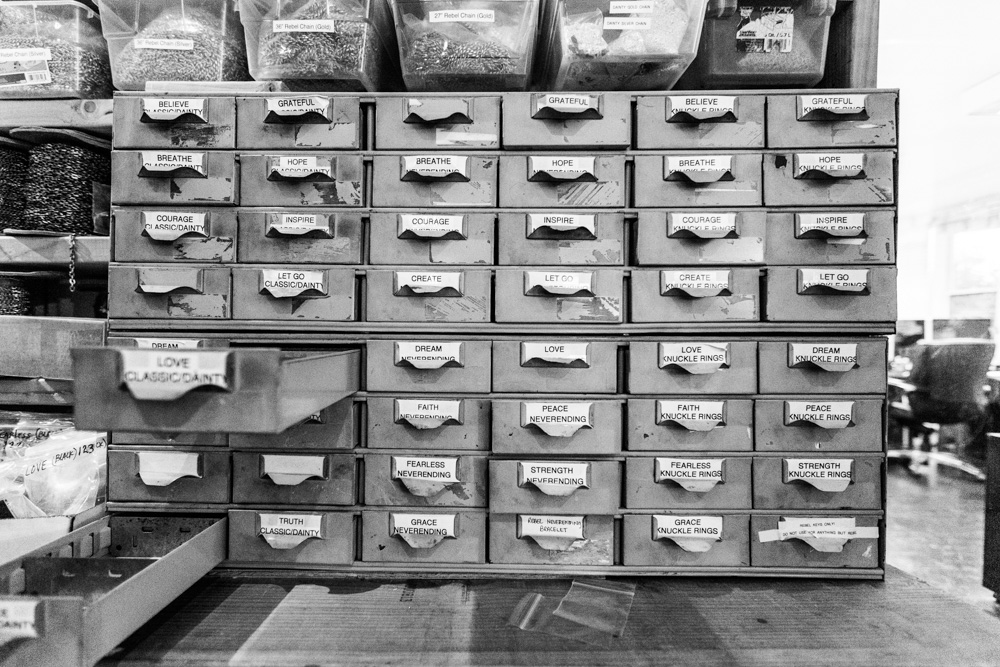 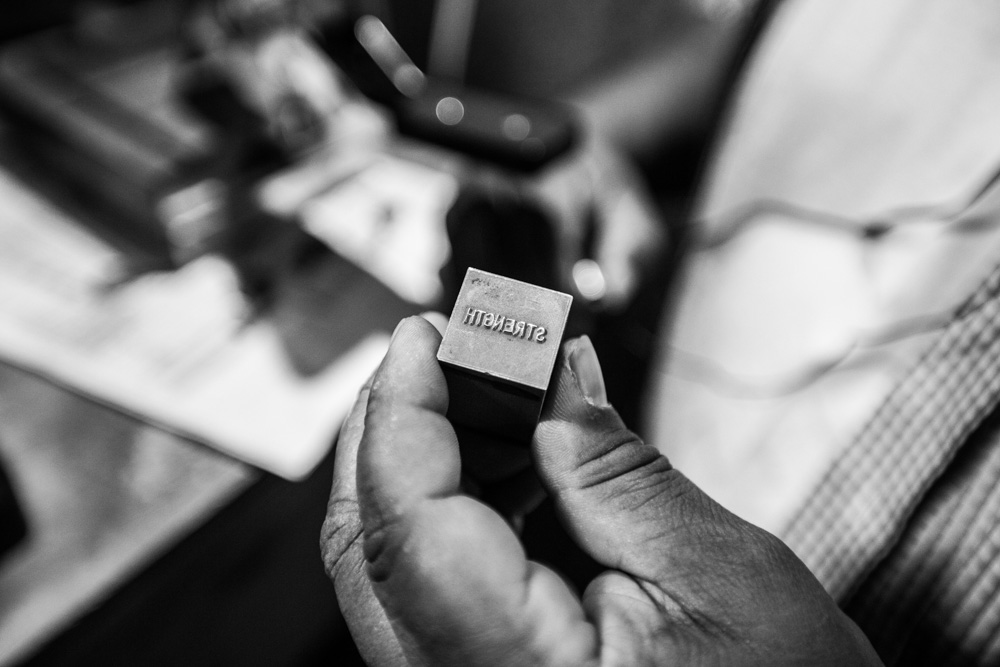 It’s like a mullet.  Party in the back, business up front.  The office is where the Giving Keys crunches numbers, follows up with sales, and runs social media, like what Steven is doing here. 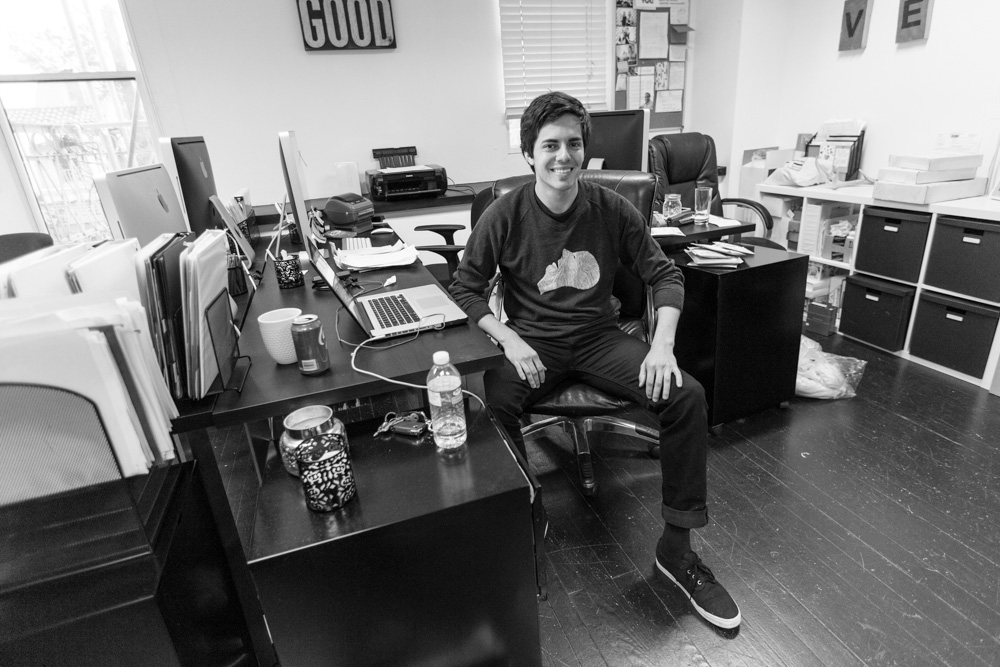 The Giving Keys has also just recently got into apparel, so now you can support the movement with tops and sweatshirts. 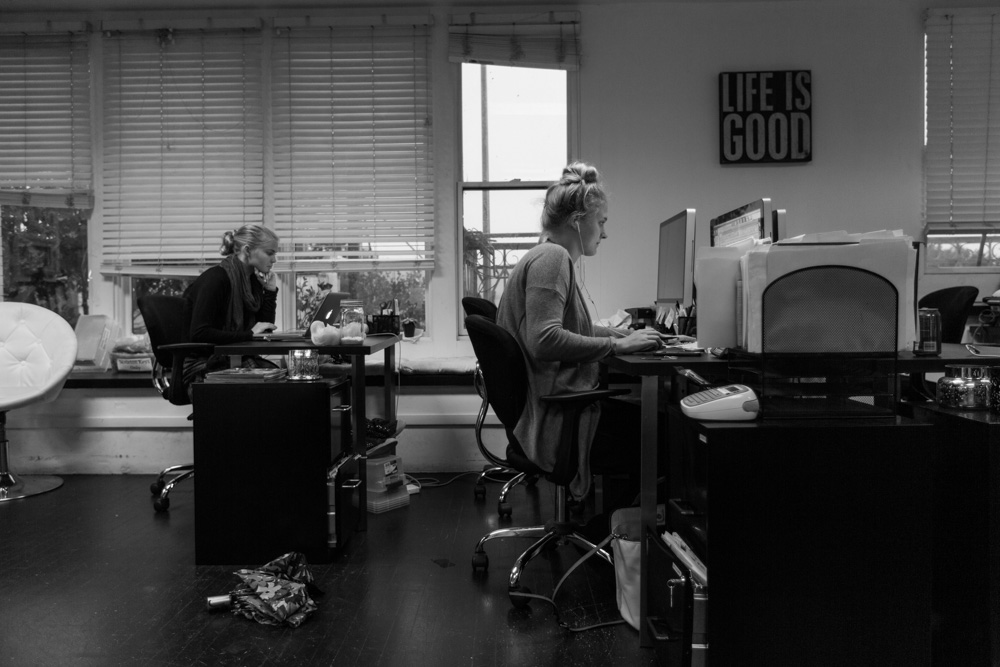 My favorite story – of all these favorite stories – was this autistic kid here who spent his entire life into adulthood collecting keys. After he died, his father and brother found out about Caitlin’s cause and donated them all, realizing that The Giving Keys was what he was working for during his time on earth.  Pretty incredible stuff.  But not so hard to believe after all of the miracles that have aligned to make The Giving Keys a reality.

You can support The Giving Keys and Caitlin’s dream by picking something up HERE.  And don’t forget to pay it forward… 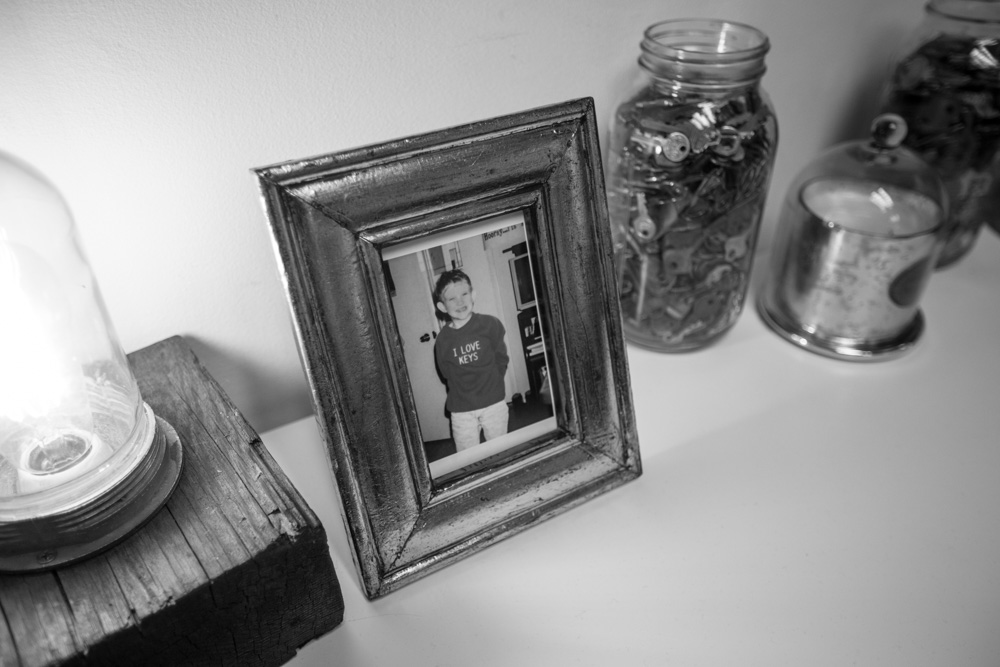