ONE YEAR STRONG :: THE PAST, PRESENT, AND FUTURE OF THEHUNDREDS.COM 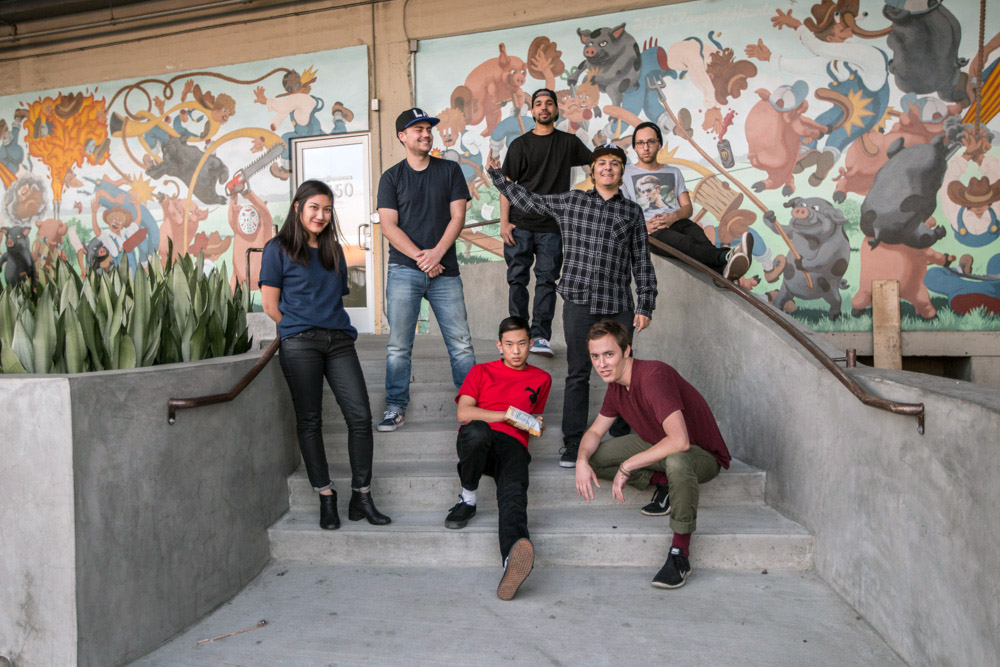 I was a middle child.  Surprised?  Probably not.

The middle of three boys, in fact.  In a traditional immigrant household, where the first son is lionized and the youngest is showered with frankincense and myrrh and then there’s me, the monkey in the middle.  I felt marginalized, unconsidered.  So, with time, my voice got stronger.  And the louder I got, the less I felt ignored.

I’m sort of ashamed – and yet proud – to say that this never really stopped.  I’ve spent my life, and my life’s work, trying to be heard.  Dammit, I got something to say, and you’re gonna listen to me!  I’d write these short stories as a kid, but no one ever read them.  I used my art to write on public walls.  I read the daily announcements in high school, DJ’ed the college radio station… I started printing my own ‘zines, then working at a real magazine.  I was searching for a platform.  Like climbing mountains to shout from the highest peak.

Then the Internet happened.  No more Kinko’s midnight runs, stapling my thumb, and dropping off crates of photocopied booklets at record stores for some asshole kid to take 12 of. Now I could be heard loud and clear to an infinite audience beyond borders.  For free.  I had just as good of a chance as CNN of getting my message out.  I loved this thing, the Internet.

This was, like, 2001 and New York City had been wounded, so as writing gigs from all the major publishing houses dried up, blogging kept me occupied between assignments.  I wrote about my sneaker collection, my fascination with A Bathing Ape, Japanese hip-hop culture, and my travels.  I also wrote about my love affair with Skateboarding, reviewed the latest CKY video, and commented on Asian-American issues.  One day, I highlighted my favorite pair of Evisu jeans and the Head of Marketing e-mailed me a thanks.  It was nice to know someone was reading.

When I met Ben in school and we agreed to work together, the blog was critical to not only differentiating ourselves, but also establishing our identity.  Remember, this was 2003.  Social networks were for sentimental college students.  E-commerce was wobbly. For the most part, the Internet was a playground for nerds and outcasts.  Not “cool” people who “had sex.”  We got called out for it by the dinosaurs.  “They’re just an Internet brand.”  Any semblance of success was chalked up to my blog.  Never had the generation gap shown so brightly as it did between bitter Streetwear veterans and blogging.  But for Ben and I, the blog wasn’t a gimmick or even the solution.  It was just a tool.  If the Internet had never been, we would have found another way to get the (written) word out.  Maybe I’d still be laying out ‘zines in the back of a copy shop or standing on the corner in a chicken suit.  Whatever it takes, right?

We all know how this story ends.  The rest of the industry caught up and infused their apparel brand with an online presence, assumed they could create better content (even if it went against their brand’s identity). But because they couldn’t, they just built a better website.  And this is where we got caught slippin’.

While our website’s interface stayed relatively constant over the decade (because, you remember, it wasn’t about the medium, it was the message), everyone else’s domain evolved.  As if I’d been listening to music on a MiniDisc player, took my headphones off, and was handed an iPod.  Not only was the early 2000s’ scrolling blog format outdated, blogs were dead anyways, ousted by Snapchats and Buzzfeed lists.

Worse than accepting our website’s irrelevance, however, was reckoning mine.

Don’t get me wrong.  Although what I did never changed, who I was had.  I wasn’t a 23-year-old firebrand anymore.  We had gone from being the underdogs to show winners, and built a formidable business in the process.  Furthermore, Streetwear around us had changed.  While I used to report from Fairfax and Rosewood daily, photographing hungry independents and dabbling designers, the underground spilled over into the mainstream.  Once a handful of boutiques, our neighborhood blossomed into an outdoor mall the kids now like to call “The Block” (or even grosser, “The ‘Fax”) attracting a wider audience, one that was less interested in what I had to say and more intrigued by the world’s opinion.  “We don’t believe you, we need more people.”  If I still wanted to be heard – If our message was to reach the next generation – we needed to update the packaging.

And so began the backbreaking quest to renovate thehundreds.com.  We enlisted 530medialab, our first and only web design agency.  The first step was dismantling the scrolling blog and assembling a grid of revolving stories, pulling content from around the world – Like me and my blog, except for every culture and community on earth.  The website needed to be responsive to all screen sizes, considering how much of our young readership was connecting through mobile.  And the content itself needed to showcase all dialects of The Hundreds lifestyle.  As I used to muse about shoes and skateboarding on my first blog, the new thehundreds.com amplifies this through a prism.

Exactly one year ago, December 9, 2013, we quietly relaunched this website.  Outside of a few news blogs and the expected haters comparing the UI to a Tumblr archive, our loyal readership were the only ones to notice.  They were also the unhappiest with the non-linear arrangement, especially if they were over the age of 25.  The younger generation interprets their world like a buffet, so our website broadcasts global street culture in non-sequitir.  This isn’t so much of a chronological timeline of global street culture, as it is an open conversation that moves around.  It took a few months, but our readership eventually warmed up to the site’s rhythm.

We spent this first year of the new thehundreds.com getting used to it ourselves.  Although we’ve always considered half of our brand as web-centric, it really was just 1 person with a blog we had to worry about.  Now we have a dedicated editorial staff that handles copywriting to film editing, as well as a team of 50 contributors worldwide that are on the ground reporting, developing video series, and spotlighting the personalities behind the movement.  That’s the biggest distinction of all.  Thehundreds.com has always been obsessed with the People over the Product.  You don’t come here to skim sales information off a press release, the release date on some Jordans or a Supreme collab.  There are other, better websites for that. Instead, you read The Hundreds because you want to connect with creative humans whose stories inspire the rest of us.

We’ve also yet to make a dime on this side of the business (EVER), and so our next steps are to milk some kind of revenue out of the website. So we’re gonna start experimenting in 2015.  Yes, you’ll see some ads amongst other strategies, even though everyone keeps telling us there’s no money to be made in websites.  I mean, they also said the same of T-shirts…

Oh, lastly.  You may have noticed that other popular web magazines are also undergoing overhauls, not just in terms of lifestyle content, but design.  We’re not claiming to have invented this interface (ahem..check Mashable), but I do foresee that more sites will follow suit, as we all vie for attention in an increasingly crowded space.  Just know that for The Hundreds, it’s simply another means to an end.  Next year, it’ll be a pet drone that televises your every move, or telepathy or whatever, and we’ll be right there with the innovation; because at the end of the day, they’re all just tools for us to be heard.  The medium isn’t the message.  The message is the medium.  And so we promise to find better and more powerful ways to express ourselves always.

So loud that we can’t be ignored. 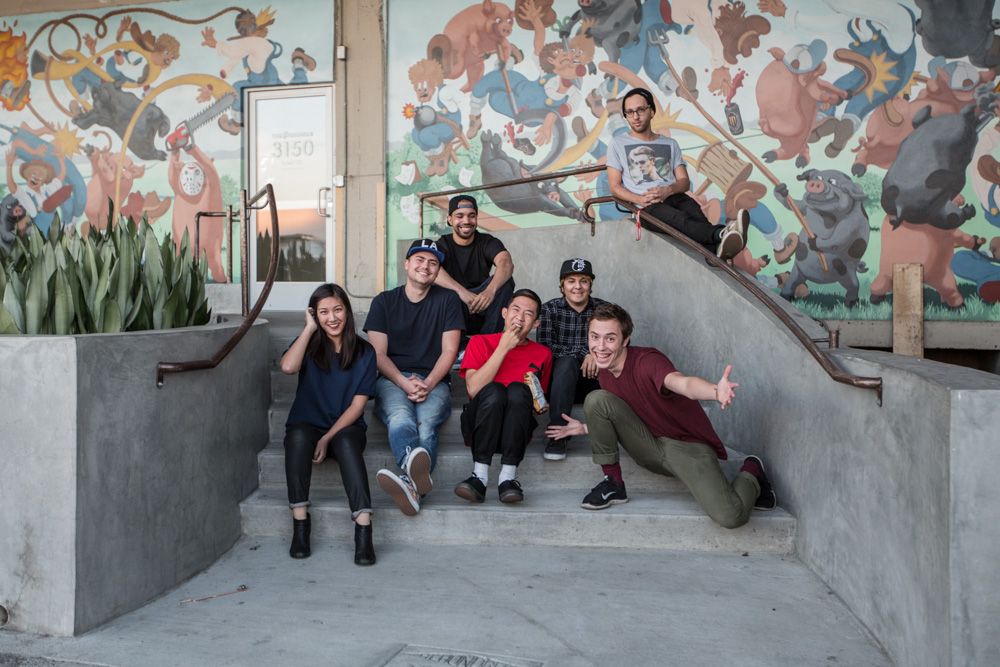 The Hundreds Editorial, From Left to Right ::