NORTH TO THE FUTURE.

Back to Bethel, Alaska. 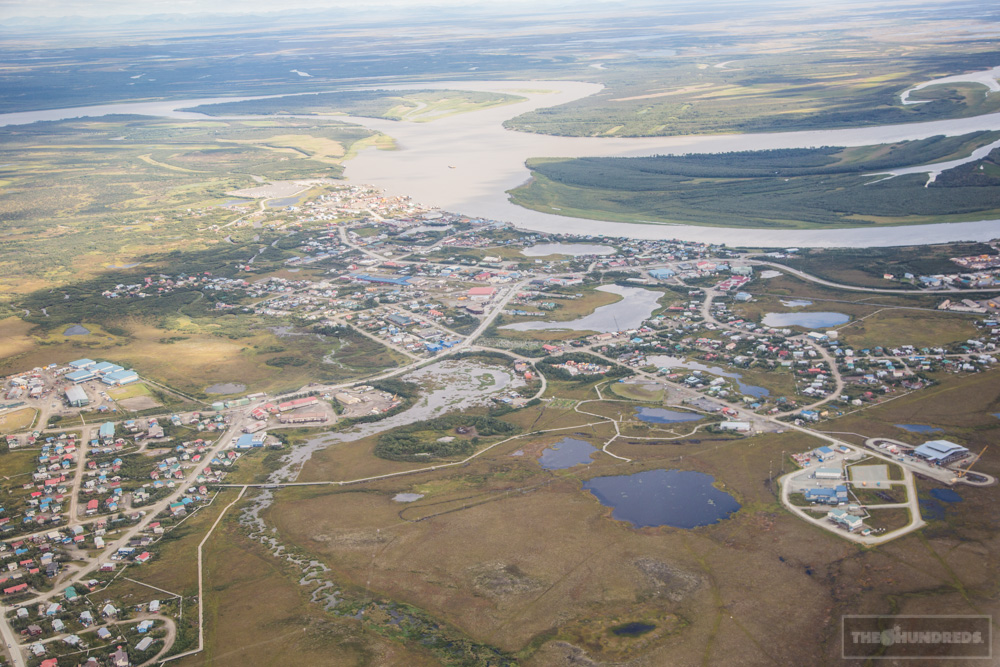 The mayor (who also runs the hospital) drives us around town, a comprehensive tour that takes but a half hour. 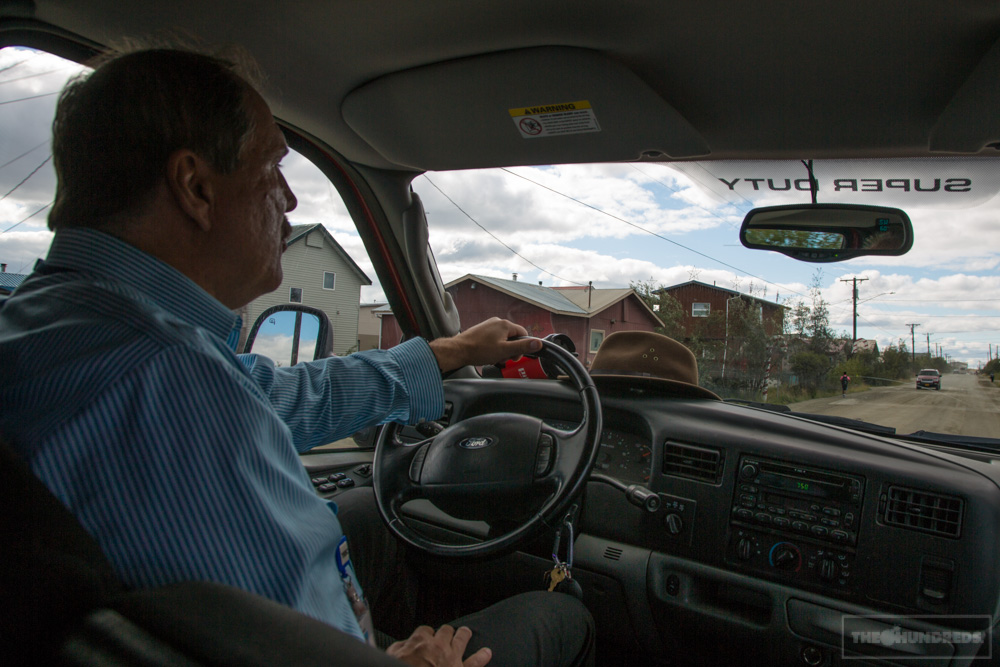 The houses in Bethel, Alaska are built on top of pylons drilled 40 to 80 feet underground – through the layer of ice (permafrost) beneath the surface – The land is constantly moving, marshy and entrenched in mud during these summer months. 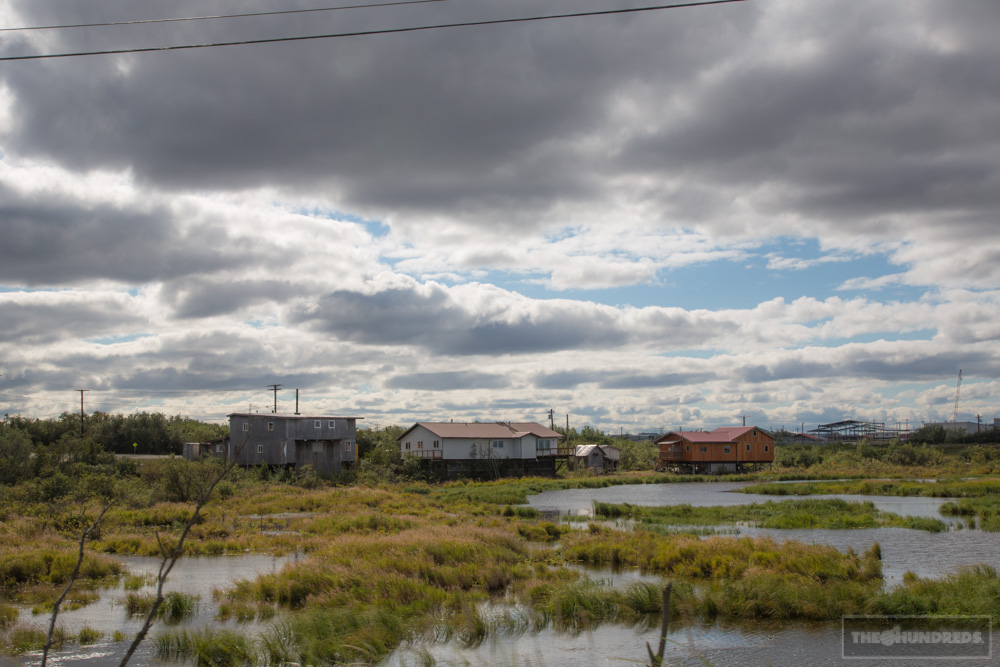 The only thing I’m bummed on is that I didn’t have time to get out and walk the roads, photographing portraits of the people and landscape of Bethel.  So all these shots are from the truck, bouncing down the dirt path at just around 25mph. 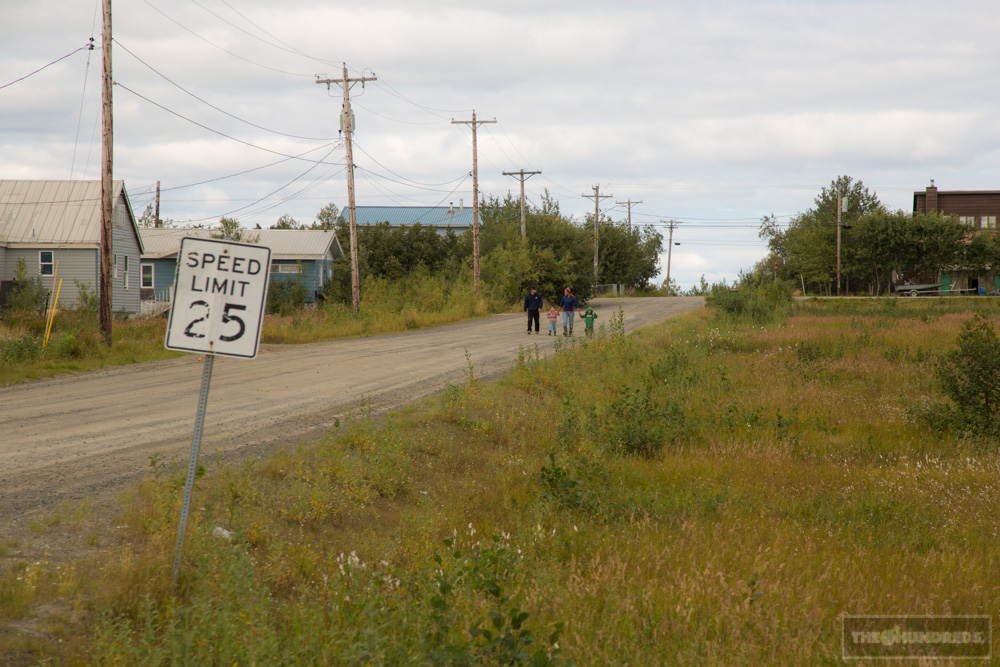 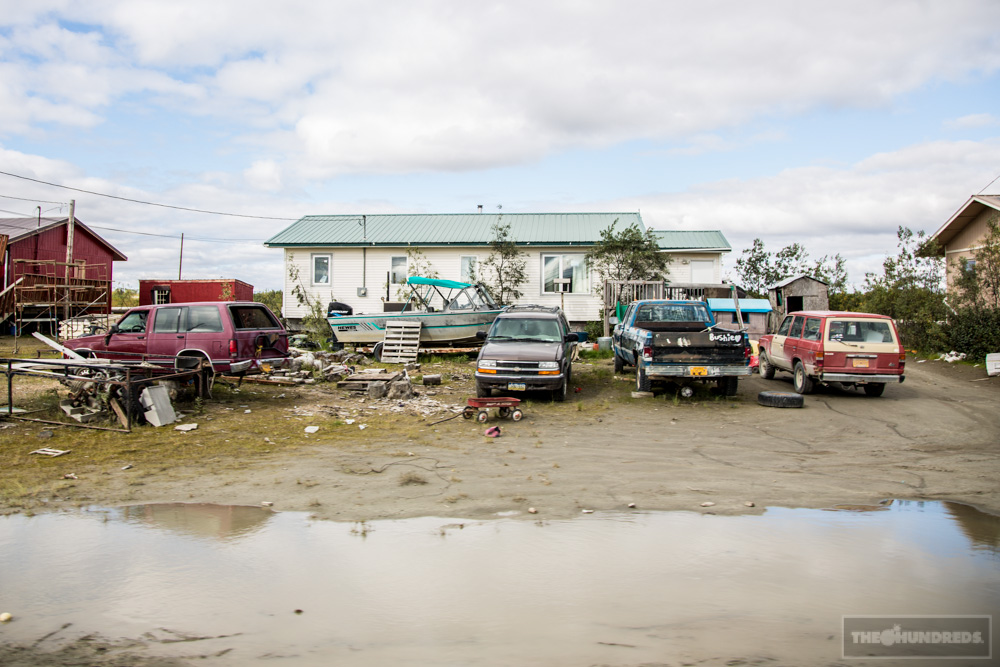 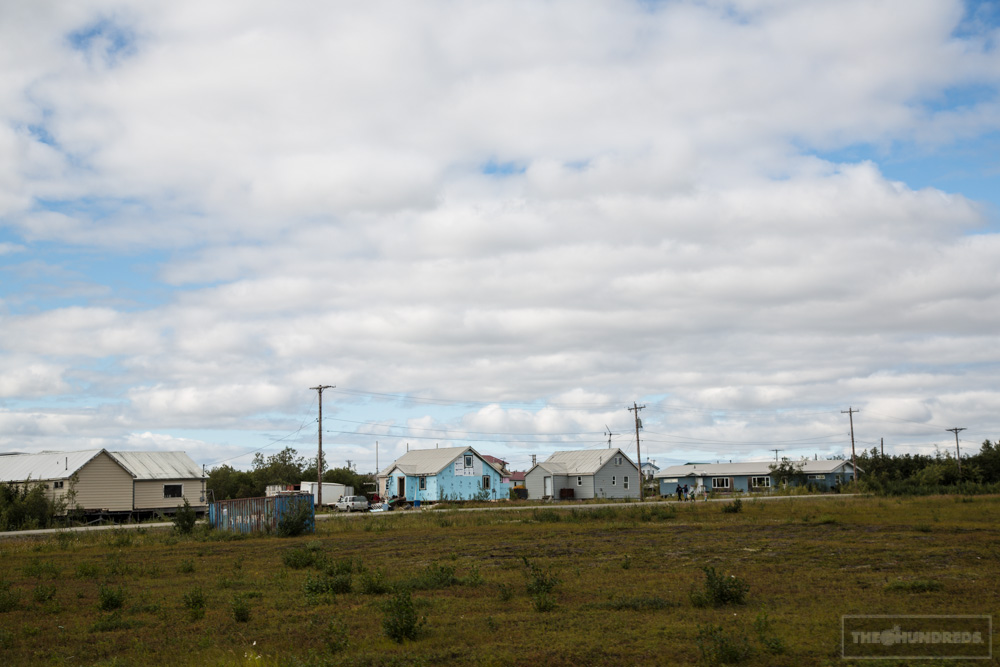 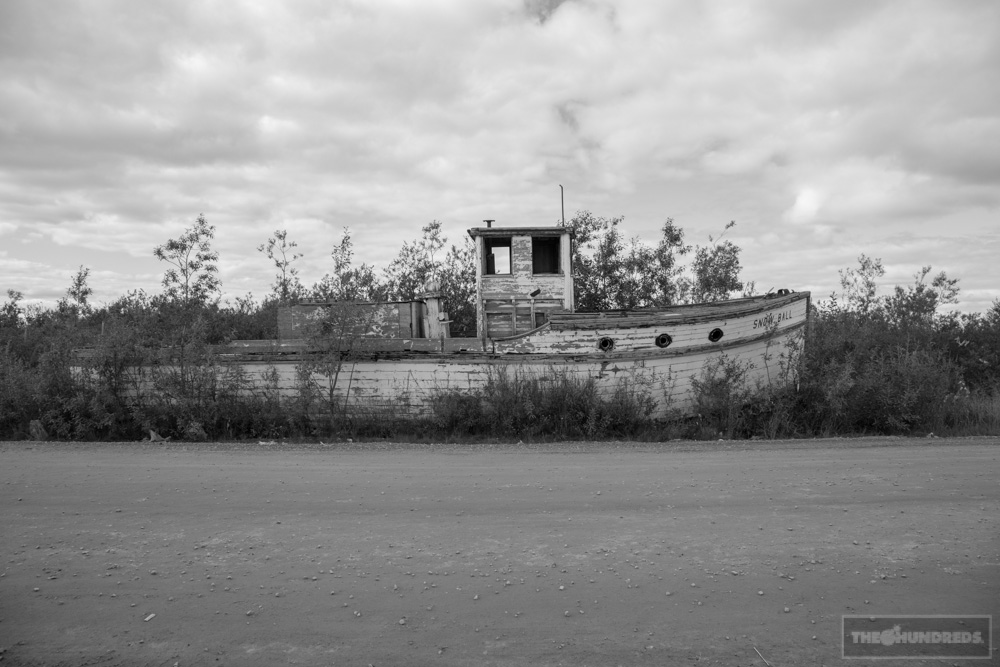 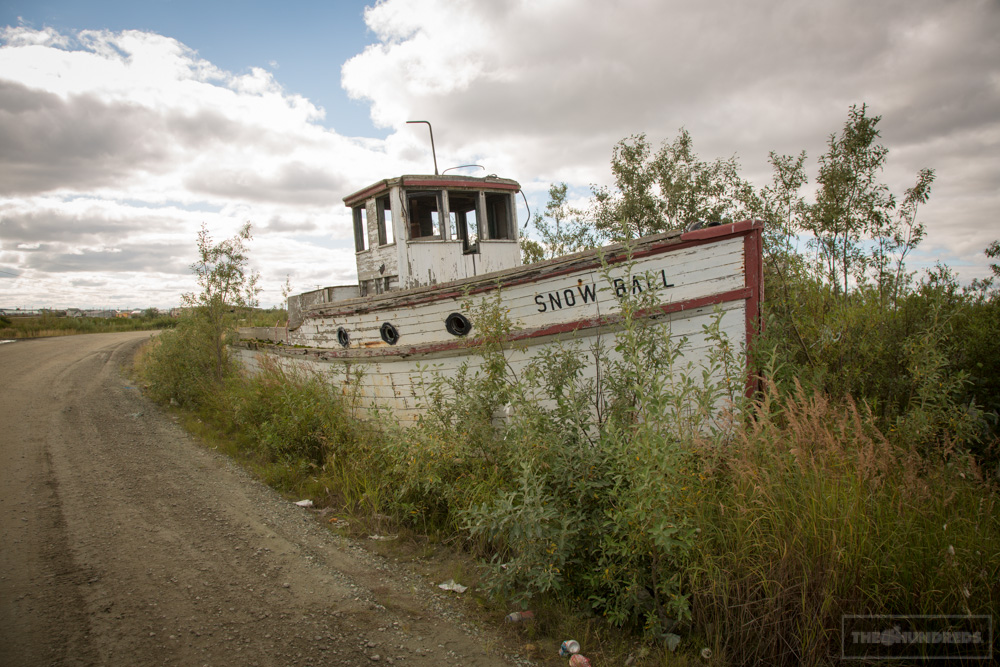 There are a few challenges that Bethel faces.  Aside from teen suicide is tooth and mouth disease because the water isn’t properly fluoridated.  Plus, the families are only allocated a certain amount of clean water that usually goes to drinking or bathing, so toothbrushing is often marginalized.

As far as crimes go, even though Bethel is a “damp county” (you can’t buy or sell liquor here, but you can bring it in), alcoholism still runs rampant. And with that comes sexual violence, unfortunately.  The local culture is that of openness, so much so that the natives don’t know how to lie. There’s not much of a legal system because if a lawbreaker is asked if he committed a criminal act, he will admit to it. 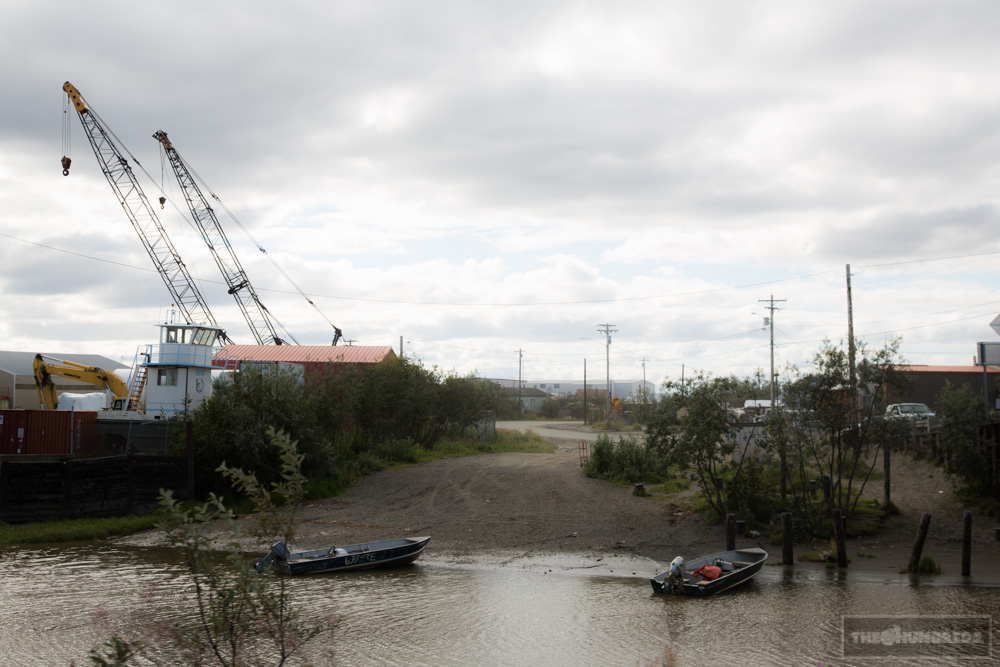 For the first time ever, we printed our flagship store t-shirts with a fifth address, that of Bethel, Alaska.  Only 100 or so printed, co-branded with the Taco Bell Foundation for Teens, and the only place you can get the tee is off the backs of the kids at Bethel Regional High.  Not only one of the most rarest shirts we’ve made, but perhaps the most meaningful. 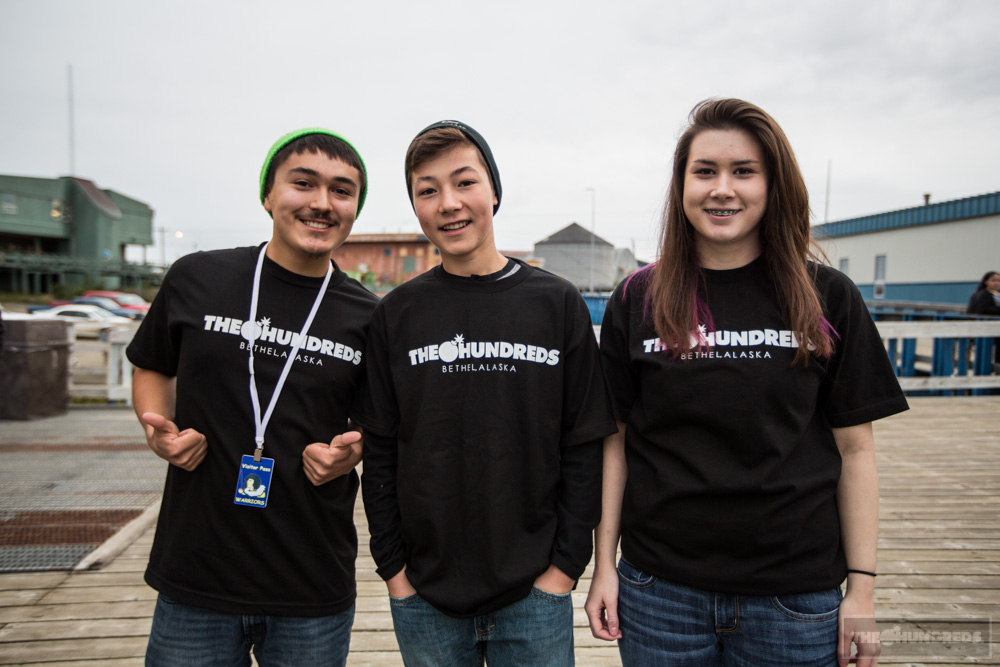 What’s all the ruckus? 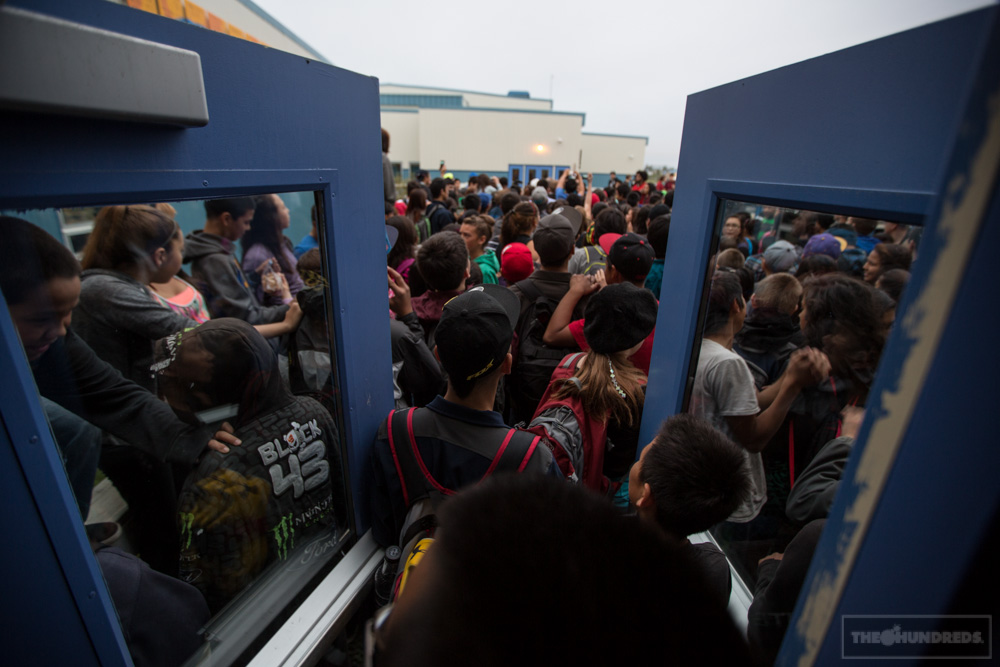 The Houston Rockets’ James Harden is on the scene.  (Here with Greg Creed, CEO of Taco Bell) 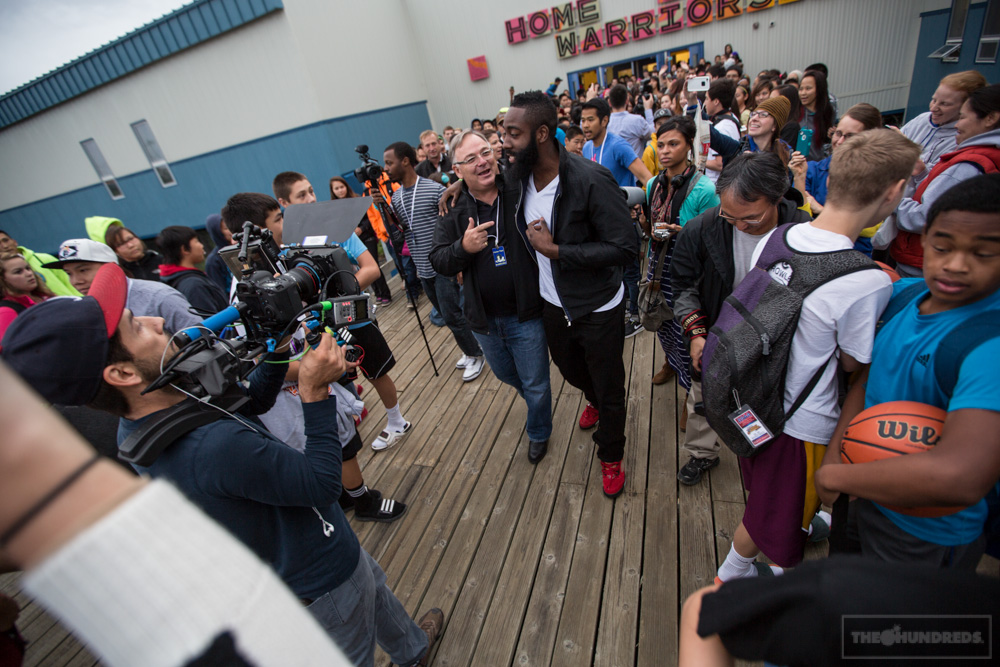 MTV’s Sway revs up the crowd. I gotta give it to this guy. Took 3 connecting flights from New York to Anchorage, got there at midnight. Woke up a few hours later to get on the plane into Bethel.  Did his thing and was right back on the plane home.  From what I understand, that’s just the dude’s M.O. – always down to help the kids out.  Big ups. 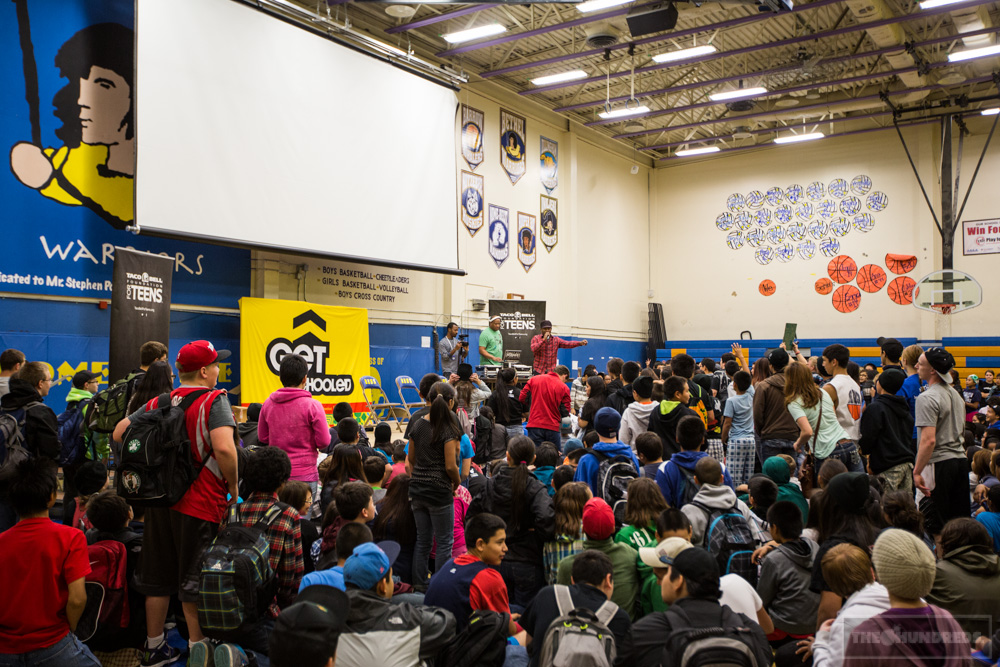 Kendrick Lamar also takes the stage on pursuing higher education and how far his school skills got him in rap. 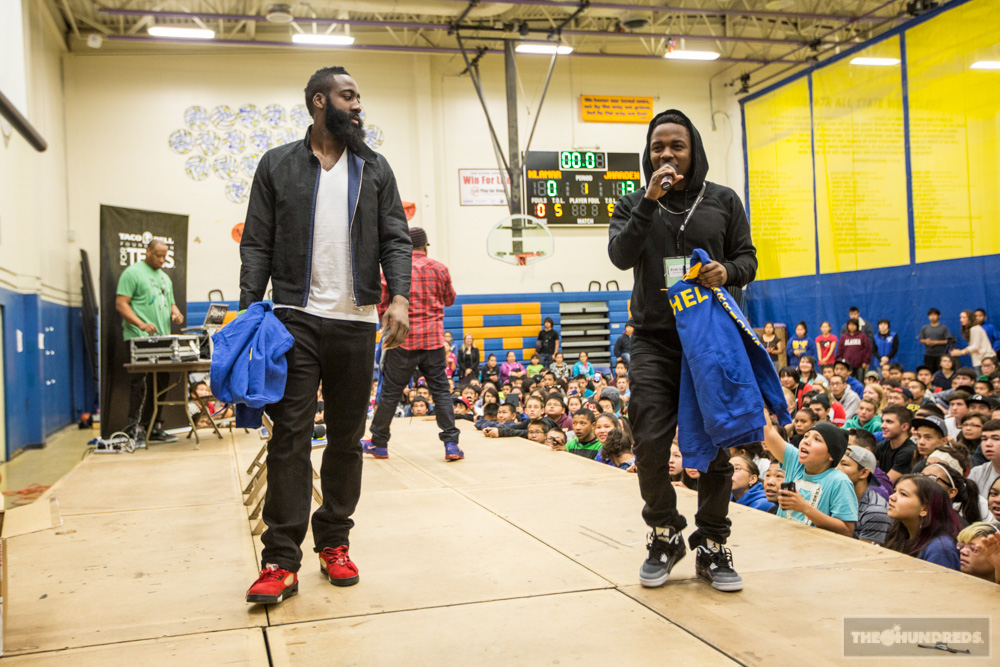 The celebrities aren’t the only heroes at this school.  Tom Richards teaches 8th grade English at Bethel Regional High.  He’s doing his best to stress poetry and literature to an Internet-absorbed youth, distracted by Miley twerks and cat videos. 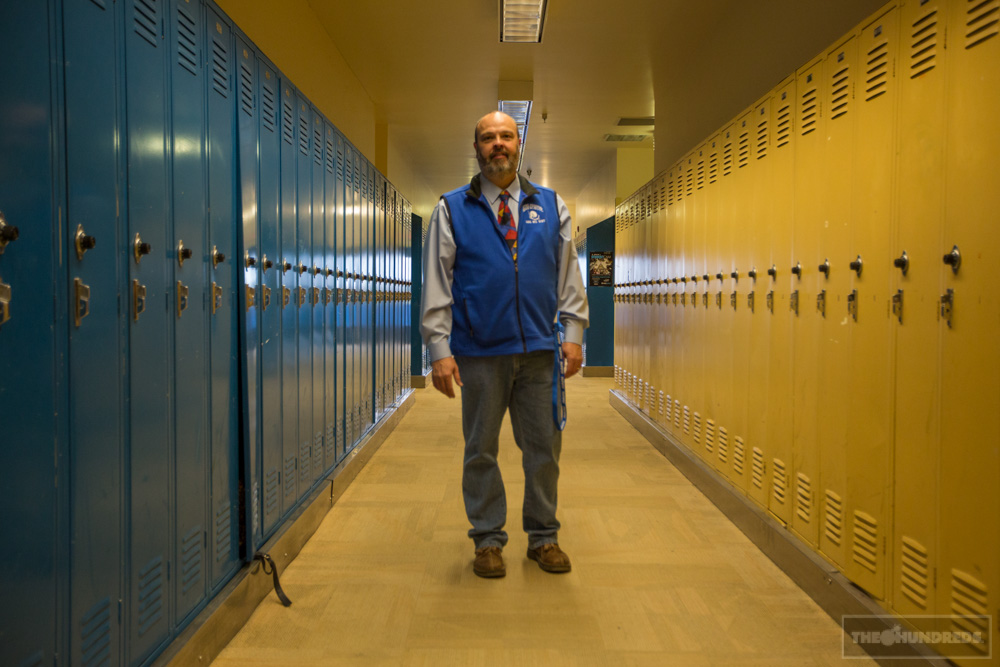 Students Mitch and Ethan (left and right) were 2 of my favorite students to meet at BRHS.  The dude in the middle is Nathaniel and it is because of he, the administration, and the inspiring faculty like Mr. Richards, that Bethel’s students gathered the motivation to work so hard and have their sights set on college.  All praise and respect to them for making the impossible possible. 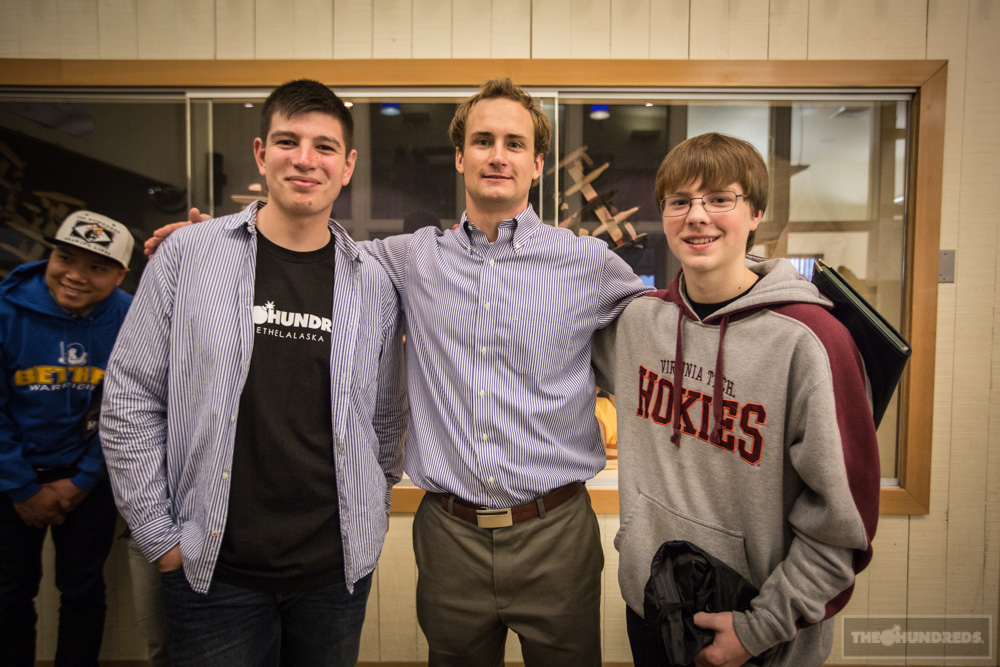 But obviously the biggest champs are the students themselves.  Goes to show how far hard work and dedication can take you.  Actually, shows how you can stay home and have the entire world come to you instead. 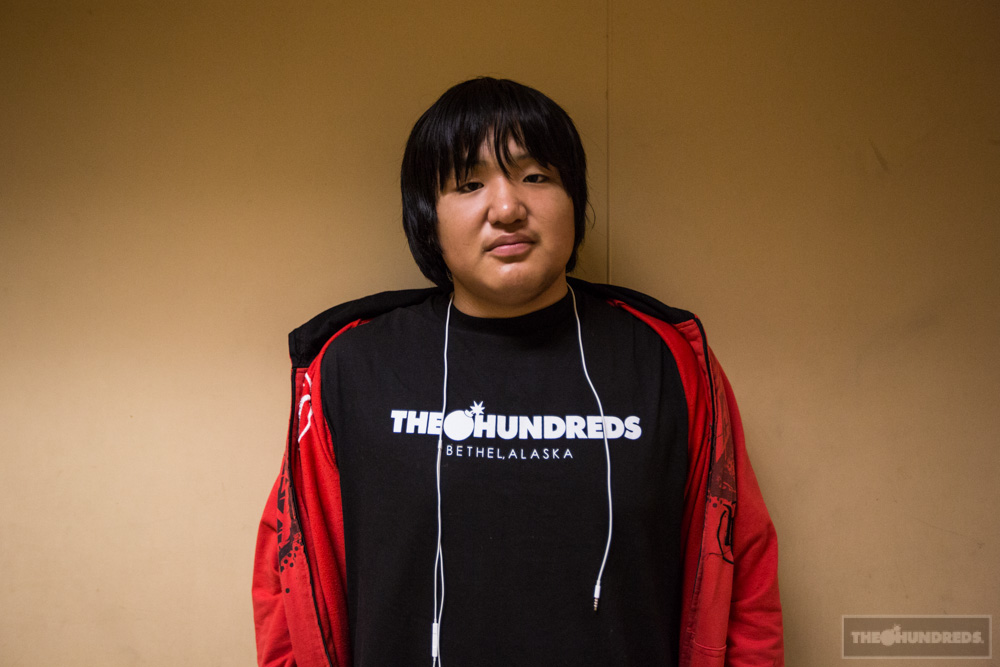 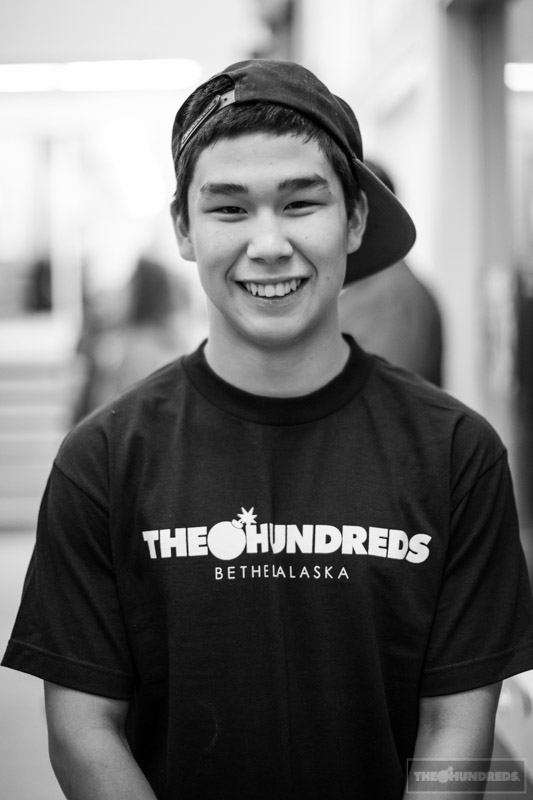 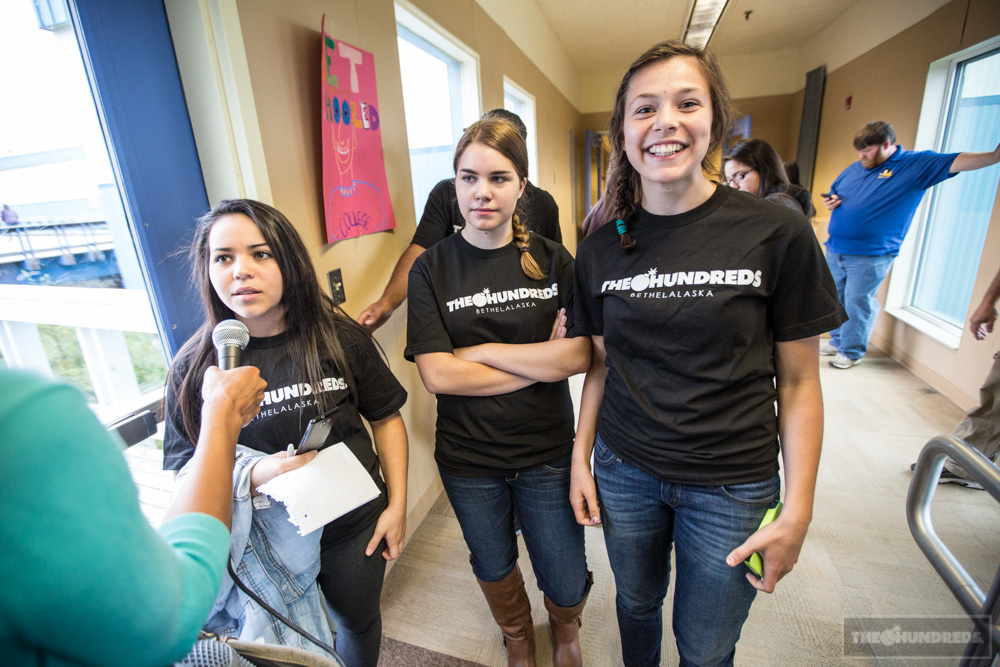 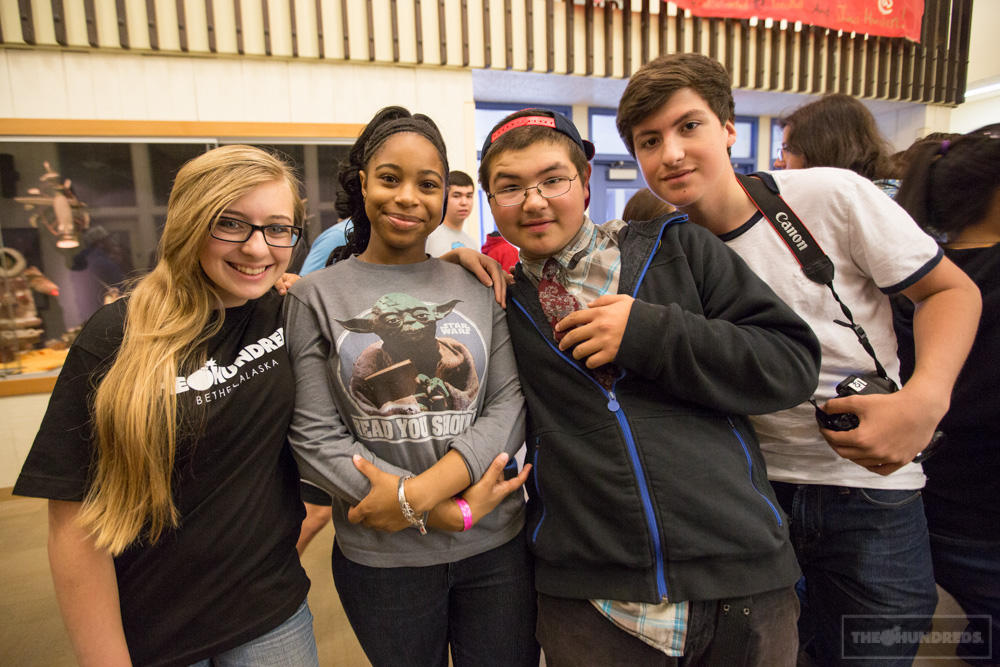 And last but not least, a big QUAYANA (Thank You) to MTV and the team at Taco Bell (Nick, Greg, Stacy, Rob, Farrell, and Regina) for inviting me to be a part of all this, speak to the kids, and capture a once-in-a-lifetime experience.  Except this will happen more than once in  your lifetime. The Hundreds Bethel will continue… stay tuned… 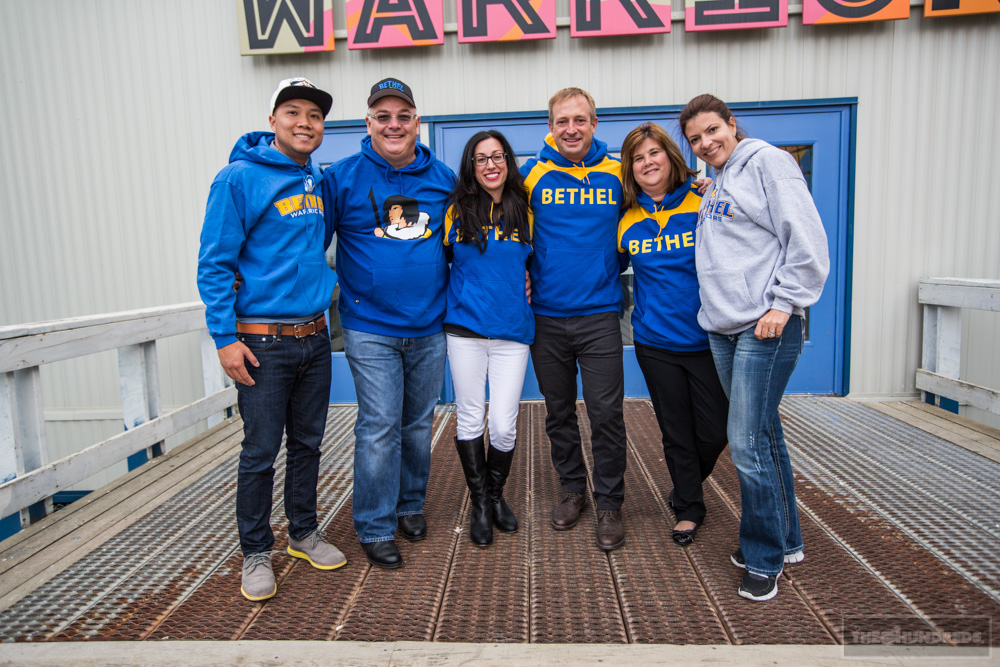