MORE THAN YOU CAN CHEW.

So a couple days back, I posted the third installment of the celebrated Sony Bravia commercials, but it wasn’t long before my inbox was flooded with irate email from readers who forwarded me onto this. Apparently, Dan (1/2 of art collective Kozyndan) is suggesting that Sony and more specifically, Passion Pictures, unapologetically pirated the idea for their rainbow bunny film from his paintings. 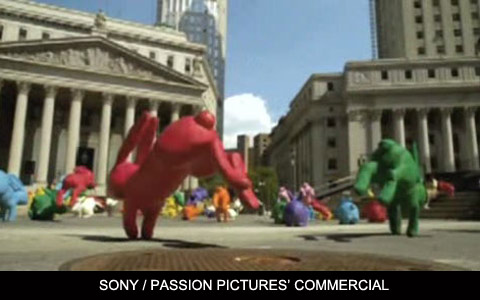 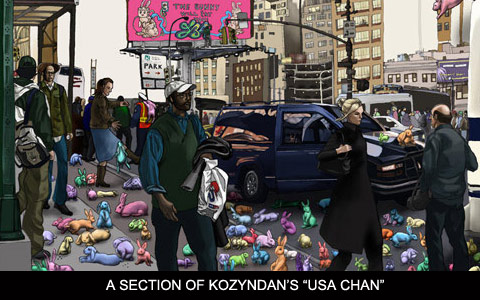 I gotta admit that from an outsider’s perspective, especially when pointed out, the resemblances between the works are striking. Likewise, much of the art community is sympathizing with the indie artists’ plight, which is further exacerbated by the pirates’ corporate backing and the fact that Passion actually requested to see Kozyndan’s work a couple years back. As a result, Kozyndan’s blog comments (as well as forums and other blog commentboards like GIzmodo) are exploding with public debate over the long-disputed fine-line issue between biting and inspiration in the world of modern/post-modern art.

I’ve actually been familiar with Kozyndan’s work for some years now (first discovering their work during the Giant Robot cover period) and I’d be lying if I said I didn’t think about their proliferating multi-colored rabbits when I first watched the Bravia commercial. But even upon reading Dan’s blog and the evidence provided, I still find it hard to vilify the corporation (and if you know me, you know how difficult that is). Truth be told, even if a conceptual artist at Passion was familiar with Kozyndan’s art — hell, even if s/he had it hanging in their kitchen — who’s to say that their art didnt’ serve as a mental springboard for Passion’s own imaginative endeavor? There’s much to be said for inspiration and influence, and even the most stubborn doubter must admit that the Bravia ad took that inspiration above and beyond the creative horizon.. if anything, re-appropriating that work into its own magnificent piece, with its own unique definition and end-result.

It’s a dilemma that’s a recurring issue in a world where nothing’s new under the sun, pop art has okayed the ethics of parody, and originality has come to be defined as doing something dfferent with pre-existing materials… The problem being that the materials are now other people’s original ideas. Back home, the issue is as prevalent in our own industry/scene as the zip-up hooded sweatshirt. Where do you draw the line between outright purposeful biting, respectful homage, whimsical parody, blatant ignorance, and sheer coincidence? And when you take into account that not only is streetwear built upon the parody (or “flip”) as far as graphics and branding go, but that this tight-niche community is inspired and reactive to the same things (hip-hop, sex, politics, cartoons, 80s/90s pop culture references, etc.), then you can’t go far without stepping on your neighbor’s Dunk-encased toes.

I can’t think of a single brand in our category, from upper-echelon labels to fresh-out-the-gates upstarts, that hasn’t been accused of biting at some point in their existence. (Some more than others, of course). There are brands that have concocted an entire formula around biting popular companies and the trends they’ve laid out, while other brands pick and choose like a copycat buffet. We’ve been accused on several instances for piracy, whether it’s a measly t-shirt graphic or from an overall brand perspective. At the end of the day, we’ve always known and understood where our intentions have laid, and there’s only so much defense that can be argued to protect one’s integrity. A wise man once said that even a smal dog can piss on a big building, and in our dog-eat-dog industry, the walls are stained with urine.

A few months back, we released a tee called “Self-Offense” in our Summer Collection. Believe it or not, I drummed up the concept and original sketches for this t-shirt in my 3rd year of college, while researching the escalating gun homicides in the States. The graphic also channeled my sentiments on law enforcement, considering the gun in the artwork is actually a police model (do the math!). The graphic was in fact inspired by a poster I had seen on campus where the tail of a cigarette curved back around and morphed into a smoking gun barrel. The notion of an object being turned on its user was intriguing to me, and I saw the opportunity for the same conceptual basis in this particular gun graphic.

As it turns out, the idea itself wasn’t a breakthrough innovation, especially when my friend Kevin later explained to me that back in the ’60s, there was a novelty gag toy called a “Polish Target Pistol” that was almost exactly what I had drawn up, except with a western cowboy-style firearm. But what really interested me was when an anonymous critic, tilted heavily with sarcasm, sent me this image of a vintage Union skate sticker, claiming that I had directly jacked the property for my “SELF-OFFENSE” tee.

I didn’t really feel the need to defend myself, because I know one thing to be true. People will believe whatever they want, and find the evidence to support their beliefs, as long as it suits their agenda. And in many ways, that’s how I feel about the situation between Passion Pictures and Kozyndan. Perhaps the creatives at Passion thought about their previous color-emphasized campaigns with rainbow fireworks, and then cascading rainbow bouncy balls, and wanted to explore the idea of color multiplication with rainbow animals.. and what better animal to represent that with, then hornball, copulating bunnies? That seems as justifiable a reason for the concept than any, but when it comes to endorsing the starving artists or the big bad corporation, we all know which side of the fence we’re supposed to be on.

The heavy irony is that Kozyndan have in turn been accused of piracy themselves. Perhaps their most remarkable piece is a reinterpretation of Hokusai’s famous 1832 painting, “The Great Wave off Kanagawa.” While the public decries Sony for stealing from Kozyndan, others are equally perturbed that Kozyndan have gained such momentum off of the universally recognizable characteristics of an original painting. Kozyndan’s painting is near-identical, except the white foam is converted into white rabbits. The issue is only confused more when introducing the artwork of renowned artist Mcray Magleby, who painted the Hokusai-inspired “Wave of Peace” back in 1985, which was later heralded as the “Most Memorable Poster in the World” by art critics. Like Kozyndan’s later work, Magleby’s piece also plays upon the wave’s foam metamorphosizing into animals, this time with doves. 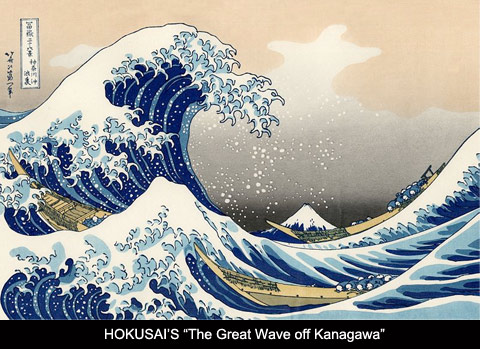 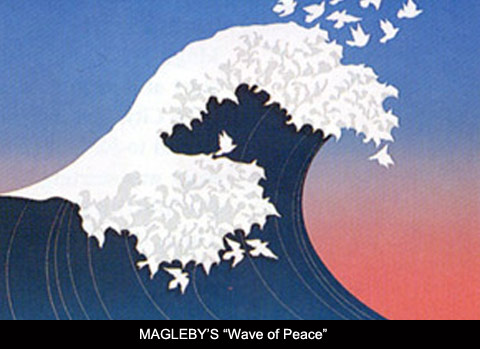 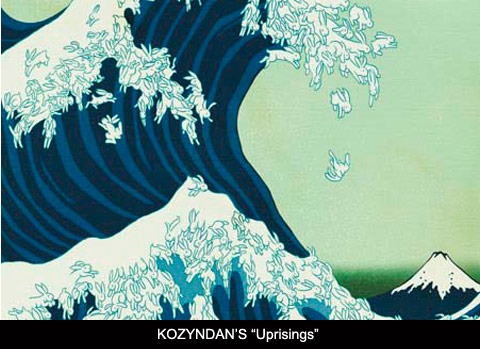 Did Passion bite off Kozyndan who bit off Magleby who bit off Hokusai who bit off Mother Nature? At what point did good intentions turn ugly, inspiration become pillaging? Or maybe we should turn a cheek and offer the benefit of the doubt… perhaps it really was coincidence. Could it be that Kozyndan never honestly saw Magleby’s work, but that both great minds thought alike and were inspired by Hokusai’s vision? Could it be that some lowly intern at Passion had glanced at Kozyndan’s artwork in a Giant Robot issue, stored it in the back of his memory, and suggested the idea as his own on to a higher-up, who took it to his higher-up and so on, until the mega-budgeted Bravia commercial ensued?

At the end of the day, it’s a mind-numbing headache to get it all situated and figured out. When the dust settles over situations like these, a select few are ever bothered enough to carry the flag and continue raising hell, while the vast complacent majority couldn’t care less and go back to their FAPE knockoff. Look at what happened when Cam’ron launched his tirade against Jay-Z for being a biter (not a writer), backed with hardcore lyrical proof, and disseminated to every major radio station in America. Last I checked, Jay-Z was still.. well.. Jay-Z and Cam’ron? Yeah. Cam’ron.

But that’s not to say that the Cam’rons of the world aren’t appreciated. We need them to keep the pirates accountable, because for an artist, nothing is more sacred than his/her original idea. That is their value and social contribution, and there is no greater injustice than when ideas are pickpocketed, or outright burglarized, and no one cries foul. Most people prize the execution of a project, but from a creator’s standpoint, the idea is the most vulnerable and valuable piece of property.

And what to make of Passion and the Sony Bravia ads? Well consider this. Bravia’s previous commercial (yes, the one with the bouncy balls) had its own problems with copycat accusations. The projection of thousands of fluorescent balls down a San Francisco street was disturbingly similar to a vintage David Letterman fly-by skit that was based around the same exact concept.. and would have been lost in the annals of syndication if not for Youtube’s unforgiving memory. Once again, was this a mere coincidence or something shadier? At the time, it seemed an excusable pass, but in light of Bravia’s newest ad, that “Road to Hell is lined with good intentions” bit is starting to play louder. I guess we’ll just have to see if Bravia’s fourth chapter features an army of rainbow pointmen to really be sure.

EDIT: Matt from the University of Chicago just forwarded me this enlightening article by Jonathan Lethem in the February Harper’s that broaches influence and plagiarism. For all 3 of you who have read this far through my obnoxious drivel.