GIRL TALK :: LEAH OF MARRIED TO THE MOB

It was probably this blurb from 2004 on Beinghunted or an Evil Monito feature or maybe it was through Niketalk that I stumbled upon Married to the Mob, but Leah recalls that I was the first one to email into her website.  Everything was starting to coalesce back then – this third generation of Streetwear.  Most of the new brands were firing off from the East Coast like Mighty and Mishka and we were all reaching out to each other through our blogs.  This was before Hypebeast and social media, when you actually had to dig a bit to discover stuff and learn and make friends.

I still remember how it felt to find Married to the Mob and Leah McSweeney.  She was the Smurfette of this smurfwear scene, so already she was captivating.  Lookbooks of pretty, badass girls modeling offensive T-shirts – these chicks looked tougher and rougher than any sneakerhead.  I think of all those boy brands back then, Leah had the most stacked against her.  She was the only girl at the time, and had the most to prove.  Over a decade later, she’s still standing.

It’s hard enough to last in this game, let alone thrive, let alone do it with a women’s streetwear brand.  But Leah did it.  Which is why I have just as much admiration and respect for her today as I did all those tradeshows and streetwear parties ago.

We’re both busy people these days, so we come together in chance moments.  Like when I was in New York and she and Sarah took me out to karaoke in Chinatown and we ate the worst pizza at 4am in the back of a bodega.  Today, she’s on extended layover in LA en route to Seattle.  We’ve been talking for over half an hour before I remember to press the Record button…

So your new lookbook is awesome. I feel like it’s the best one yet.  I saved 3 of the photos as computer backdrops.
Yay, that’s awesome!

Who shot it?
Lani. Lani Lee her name is.

Oh, I don’t know her, but I know of her stuff.
Super bad ass chick.

It looked really good. So what was the theme and concept of that season?
For the photos or..?

Give me both. For the collection and the lookbook.
You know what? People always ask me what the concept for each collection [is], but like, it’s–

[laughs] Yeah, I agree with you.
You know what I mean?

Yeah, it bothers me too! But you know what that is? That’s Marketing/PR speak. Because the media need to have these fresh stories for people to latch on to.
You have to make shit up. It’s like ugh.

The concept, I pulled some inspirational photos. Some Helmut Newton photos that I really liked. You know, it was more about lighting. It was really about the lighting and just this girl up in the hills. Like, what’s she doing? She’s alone, she’s on her bike, fuckin’ like, in her bathing suit, hanging by herself, smoking a cigarette, just chillin’. 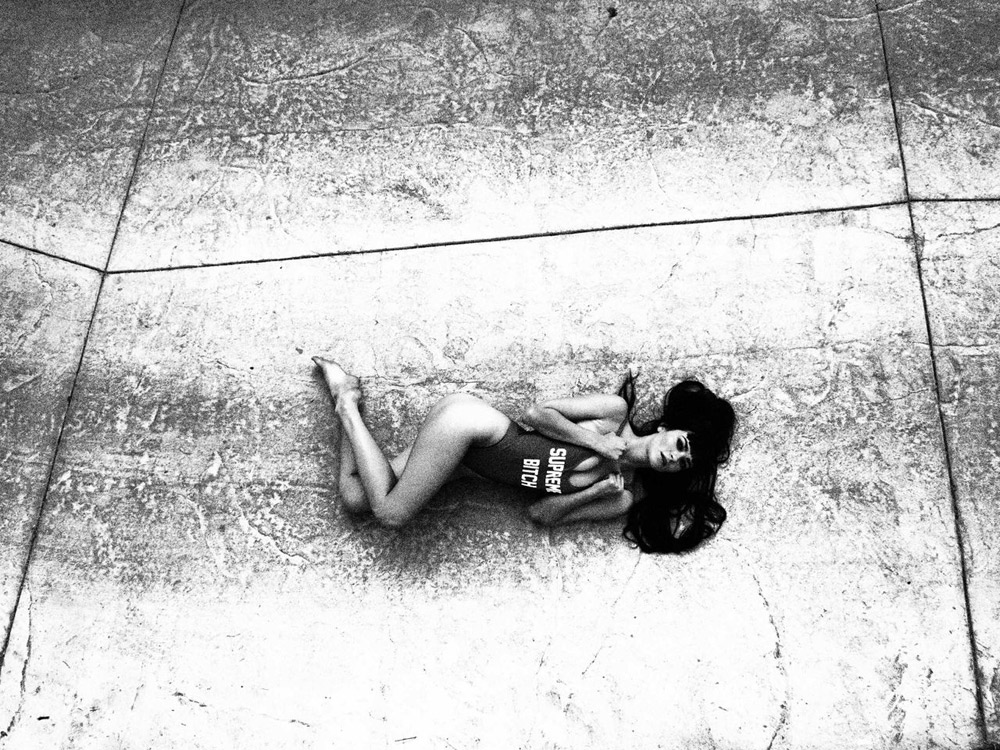 Married to the Mob Spring 2014 Lookbook photographed by Lani Lee

How big is the collection now?
It’s big. And you know what, we continually – almost on a monthly basis – you know, we did 40 oz. and Spring 1. Two collections at once. Then Spring 2 a month later. Now Summer a month later. Then we’ll do Fall a month and a half later. Then Fall 2 which will be smaller another month and a half later. ‘Cause it’s all about – if you want to make money, you have to keep making stuff to keep showing people.

What was that move to Zumiez like for you?
I was really grateful and felt like the brand took… I feel like it matured, in a way. Because it’s able to get to customers that couldn’t get to it before. And I wanted to work with Zumiez years ago, so the fact that they hit me up, that’s always like…

So is that happening? Are you seeing traction with an entirely new audience that never heard of Mob before?
Yeah. Definitely.

That’s so sick! What’s that like?
I’m sure it happens to you, too, right?

It does, it does. I say that someone finds out about The Hundreds everyday, still.  Don’t forget that an hour ago, a 17-year-old kid somewhere is like, “What is this? This is amazing.”
For sure! When I get a tweet, like, “Oh my god, I just found you girls and this is my new favorite clothing line.” I’m like, “Whoa. That’s so cool.” It’s nice, you know?

What else should I…
We were talking about more interesting stuff before you started recording!

I know, but no one wants to read that stuff.

Wanna hear about some dope stuff I have coming out?  Because I got a major one. Spring ’15 Mob… and X-Large.

No way. I love X-Large.
Yeah. We’ll be showing it at Agenda.  You know I fucking grew up wearing X-Girl, but going to X-Large. Shopping in Lafayette.  That was the shit.

What’s it look like? Is it ’90s themed?
It’s going to really mesh both of the brands together in a very awesome way. I’m so excited! This might be my favorite – I’m so excited because I respect this brand so much. I’m honored. So honored.

We worked with them very early on and it was on a G-Shock.  That was one of my favorite collaborations I’ve ever done, because I feel the same way about X-Large.
Really. Those are people you look up to, right? Before I even knew what I wanted. I mean I was 14! 13, going there [to X-Large].

I’ve told everyone that the real first women’s collaboration that I want to do is if I can get Sofia Coppola and Kim Gordon to do an X-Girl/Milkfed thing.
If I don’t do it first.

You’re probably gonna end up doing it first. You should! But have you seen that YouTube video from MTV House of Style –

Where they do their fucking runway little fashion show outside and Chloe Sevigny is in it. And just the world’s not that cool anymore and never will be.

I watched it and had to ask, “What happened to this? Why didn’t it carry on forever?”
‘Cause she’s making ill movies. [laughs]

Right.  Which is what you’re gonna end up doing! Do you wanna talk about how you want to make documentaries?
Yeah! I feel like it’s so premature to talk about because I haven’t made one yet, but I’m developing one. I’m developing a few and I don’t feel pressured to do it within a certain time period or anything. This is what I think about all the time and it’s a passion. I want to go from telling stories with clothing to telling stories with film. And it’s still gonna be… it’s still gonna have Mob in it somehow even though it’s not gonna have anything to do with the clothing brand.

…because Mob is Leah.
Right. So it’s still gonna be very Leah-esque. But I’m not making a documentary about myself, obviously. It’s things I’m interested in or things that fascinate me.

I want to make a documentary on Leah.
[Laughs] That would be scary.

What are your top 5 favorite documentaries?
Okay. The Impostor.

So good.
SO GOOD. Telling Nicholas. Very, very sad. It’s about a little boy who lost his mom in 9/11 and [this] documentary filmmaker who happened to live in the financial district right by the World Trade Center was like, “You know what? This happened. This is my chance, I’m gonna make a movie. I’m gonna find one of the missing people posters and call it and say, ‘Can I make a film about you trying to find your family member?'” And it turned into this whole story about telling the son that’s 8 that his mom is not coming back. That’s a very deep and dark one.

I love Supersize Me. I love Morgan Spurlock, I think he’s great. I love Loose Change. It’s about 9/11 conspiracy, even though I don’t totally agree with it, but it’s very… tantalizing. It’s crazy how so many of these have to do with 9/11, I’m realizing, but there’s also a movie called The Woman Who Wasn’t There about a woman who faked being a 9/11 survivor just to be part of the group. She actually became the head of the survivor group, which was full of thousands of people.

You know what I recently did? I made a list of every documentary I’ve ever seen and I’m not finished with it, but there’s like 50. There’s a lot. I’ve seen a lot of documentaries.