It’s been a long time since I’ve been obsessed with a video game. Not since the days of the golden Zelda cartridge and knocking out King Hippo have I found myself feverishly playing a game, hoping to level up and eventually brag about beating it. While most of you engulfed yourself in the complexities of Halo and Skyrim, I’ve longed for the days of only having two buttons to mash and slowly distanced myself from a pastime that has just become more and more complicated. Sure, I’ve purchased every new Playstation purely to be on top of pop culture, play each year’s NBA 2K, and try out the most recent GTA until I get dizzy, but the joy is mostly gone, focusing on other dumb shit like writing jokes on Twitter or buying Space Jam memorabilia on eBay. I’ve longed for the old days where I could edit together music videos for Kris Kross or skate as different T&C Surf characters, but I understand the industry has progressed and passed me by. Which is why the emergence of Until Dawn for the Playstation 4 was such a pleasant—and terrifying—discovery.

I hadn’t even played a video game for almost a year, mostly because I have shit to do. But with some free time approaching and the deafening buzz from new releases like Metal Gear Solid V: The Phantom Pain, Mad Max, and the new Madden Football, I figured I’d dip my toe back in the water, even to just realize it was too cold and deep for me to waddle. I had read reviews for games like Metal Gear and its perfect 10 on IGN.com and a glowing take on Madden 16, and figured that’s what I’d be wasting my time on—even if I’m still painfully confused by the plethora of in-game options they offer. What ever happened to Mario warp zones being the most complicated aspect of gameplay? So, when I found myself outside a RedBox—the tiny distant cousin of what once was Blockbuster Video—and saw the game Until Dawn available for rental, I inexplicably threw all my research out the window and took it home. I knew nothing about the game, which had an ominous skeletal hourglass on the cover, but had a weird feeling it would be great—and I wasn’t wrong.

The game follows a group of teenagers who escape to a remote cabin in the woods, only for a childish prank to forever change their lives. When they return one year later looking for closure, they stumble on an even larger, and more supernatural, issue they must face to clear the air. Let’s get this out of the way first: they use actors and actresses you know in the game, which at times, looks exactly like a movie. Hayden Panettiere takes a second from saving dolphins and having sex with monstrous Russian men to play the game’s lead character, while Mr. Robot’s standout star Rami Malek and Agents of S.H.I.E.L.D.’s Brett Dalton also appear. And this all makes sense because, at times, Until Dawn plays more like a TV show you’re binge watching on Netflix than something in the same genre as Star Wars Battlefront. As the teens, you make split-second decisions—like deciding between running or hiding or using a weapon—and those decisions work in a “Butterfly Effect” (don’t worry, not that shitty Ashton Kutcher movie). It means your actions will determine how the rest of the game plays out, as there are hundreds of different outcomes, meaning no matter how many times you play, you’ll most likely see new content and endings. If one of the characters were to die, you can’t change that. It stays that way. Like real life. The only way to try and save a dead character is to start all over. Just like your 7th grade Sex-Ed teacher told you, “You have to live with your decisions.” And although she was talking about gonorrhea, it applies here as well. Also, at certain points in the game, they will ask you to honestly answer questions about what scares you most. With that in mind, if you happen to choose clowns, be prepared to see some motherfucking clowns. 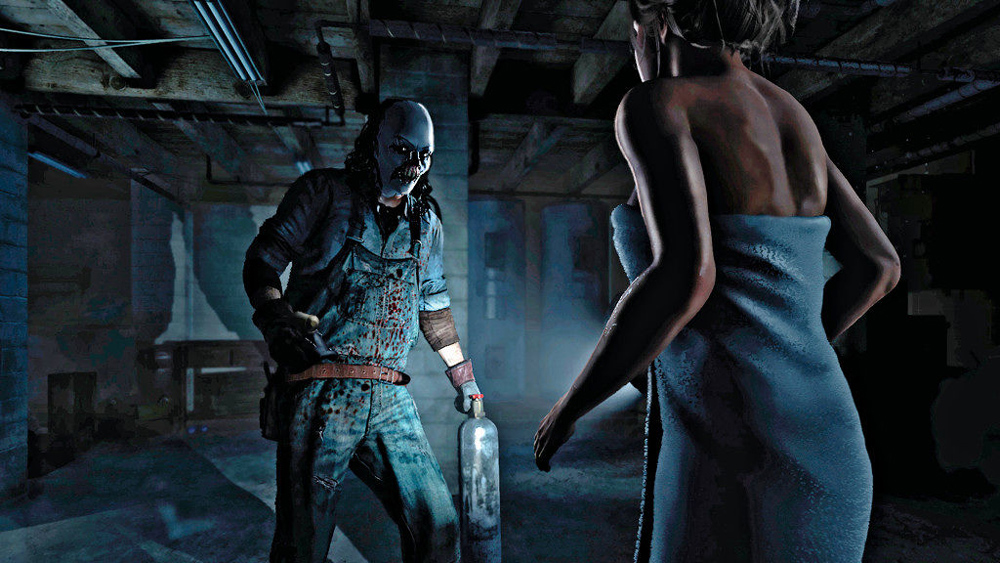 And for gamers who are just a little tired of elaborate gameplay and instructions like myself, Until Dawn is the perfect amount of simple—the type of game that will be enjoyed by even non-gamers who are watching you explore from the sidelines. You just decide what to do, explore, and quickly press buttons when prompted. That’s it. And it’s still enthralling! And that’s because it’s horrifying. There were unforeseen creatures or monsters that would pop out at every turn, forcing me to jump and yell more than any horror movie I’d ever seen. Which also makes sense because the writers, Graham Reznick and Larry Fessenden, are long-time collaborators with genre master Ti West, and have had their work seen in movies like The Innkeepers, The House of the Devil, and V/H/S. The story follows many predictable horror movie tropes, but with the addition of interactivity and a somewhat postmodern admittance of the viewer, the game basks in its own cheesiness.

And it would seem this type of interactive, episodic gameplay isn’t necessarily a new genre. We all remember the painfully difficult arcade game Dragon’s Lair, which stole more quarters from me than Daniel Wentworth (that’s not a pop culture reference, that’s just a bully who stole my lunch money. Fuck you, Daniel). I even played games like Shenmue, which cinematically dealt in quick time event sequences on the Dreamcast in 1999 and is still considered an underrated classic. Also, publisher Quantic Dream has made their mark on the industry with games that rival anything you can see in a theater with titles like Indigo Prophecy, Beyond: Two Souls, and Heavy Rain (which was heavily influential on Until Dawn). If you throw in the work of San Rafael’s Telltale Games, who have taken some of your favorite movies and TV shows (Back to the Future, The Walking Dead, Game of Thrones) and turned them into connected, story-driven action-adventure games, it may seem like quite a crowded field. But truth is, Until Dawn takes elements of each of its predecessors and perfects the method. Where Dragon’s Lair was too hard, Shenmue was too slow, and Telltale games are too cartoon-ish, Until Dawn is the blend I’ve been waiting for. 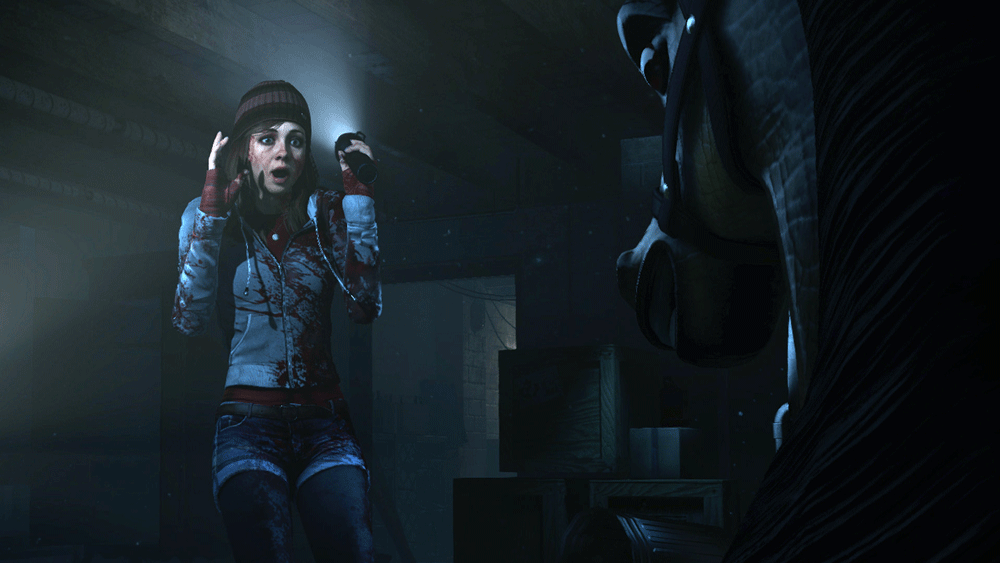 When all was said and done, I played with my friend Justin and girlfriend for TEN HOURS STRAIGHT. We decided we wouldn’t quit until we finished the game, and ironically played until dawn. It was one of the most fun nights I’ve had this year, and the most fun I’ve had playing video games since I beat Contra without the 30 lives code. Keep in mind, I don’t do Molly or anything, so my definition of fun may be different than yours. But the thing I took most away from my time with Until Dawn was video games’ eventual ability to take over movies and TV as a narrative platform altogether. I know that sounds insane, but it’s clearly possible. With YouTube channels like PewDeePie and the popularity of Twitch, watching video games as a passive observer has never been more popular. A game like Until Dawn helps explain that new phenomenon, even for a skeptic like me. Don’t be surprised if one day you’re controlling Channing Tatum as he decides what to do next in a 4th installment of Magic Mike. For the record, I’d make him finally get a real job! 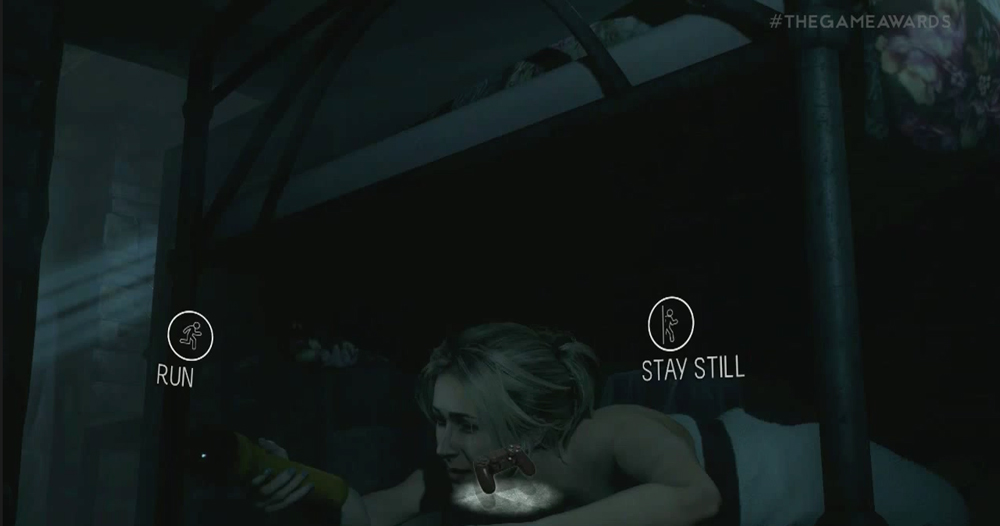 I know this game isn’t for everyone, especially dudes into World of Warcraft who are looking for anything but a casual experience, but this type of game HAS to become more common. The excitement and participation could easily become the norm and offer a totally new avenue for entertainment, even for casual fans (especially girls) who would never find themselves at E3 or a League of Legends Tournament. The possibilities are endless with games like these, a modern day Choose Your Own Adventure, and I couldn’t recommend it more. For now, I’ll go back to missing R.C. Pro Am, but the moment Until Dawn 2 is announced, I’ll start waiting patiently to spend 10 more hours of my life being scared. Todd Knaak
Todd's back with his movie night Wednesdays, so curl up on this miserable hump day and learn why the 2013 slasher flick (that everyone slept on) You're Next is a must-see addition to the horror genre. Todd Knaak
Our resident film geek is here to give you a brief guide on how to defend your love for the summer's newest blockbuster hit, "San Andreas."
HIDE COMMENTS