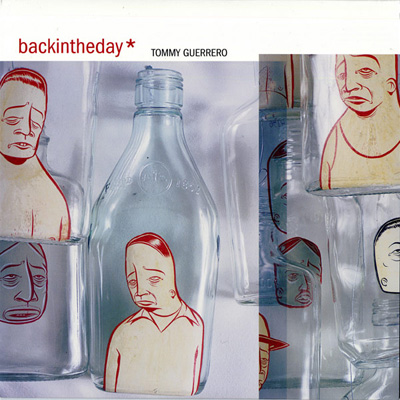 I understand you’ve been playing music since you were 12. What were some of your biggest influences then?

Mostly punk, standard shit; Sex Pistols, Ramones, The Clash. We progressed in a short amount of time, and started playing all types of metal etc.; Led Zep, Sabbath, and Rush. I wanted to be Geddy Lee.

And what are some now?

Same!! Ha! It really depends on the mood I’m in. I dig all genres. Just has to be honest. I listen to a lot of old funk/soul/jazz, lots of music from the late 60’s early 70’s, but I also have a soft spot for late 70’s/80’s stuff like Joy Division, The Cure, New Order, Echo & The Bunnymen, The Smiths and so on. The one person that usually hits me in the gut is Bill Withers.

Can you walk us through the songwriting and recording process for your solo efforts?

Plug in and go. It’s all very spontaneous. I don’t make demos/scratch tracks, so what you hear is of the moment, but finishing a tune is a long listening process. The tune will always tell you what it needs and what it doesn’t. That’s the hardest aspect of creating shit solo: no one to bounce ideas off of. Gotta make sure you listen to your initial instincts and follow your gut.

Depends on the project. I’d say 85% of the whole is my outstanding talent and genius. All are gold record-worthy, the masses just don’t know it. I’m about to go into the studio for a week and record a “live” album for Japan. That will be 110% of the master’s handiwork. My head can’t fit in this room anymore…

You record in your home studio, correct?

Yeah, mostly, but I also record with my friend Monte at Ruminator Audio. We do quite a bit of sonic revisions, instruments through bullhorns, different amps and effects etc, to give it some life. I want the outcome to almost be tangible.

What kind of equipment/software do you use?

Pro Tools on the Mac, for the most part. Out of efficiency. I don’t have much time to dedicate to music so I need to plug in and go when the muse comes a knockin’. I’d love to record to tape but it’s just not possible all the time, right now anyway. Monte does have a 1″ 16-track that we have used on several records -record drums and bass and then dump into Pro Tools. I have way too many instruments to list. I need to purge a bit.

How often do you like to get out and perform live?

I’m always down to play, but I keep it to a minimum when it comes to a straight up “TG” show. At least in the bay area. Don’t want to wear out my welcome, ya know? Also, half of my main crew live on the East Coast, Philly and NY, so it takes money to make it happen. I don’t have a label that gives tour support, so it’s out of my pocket, or Japan that makes it happen, but I have a group of friends/amazing players here in SF, and we do all kinds of benefits and events. The last one was for MuST – Music in Schools Today, as well as San Francisco Food Bank, Meals on Wheels, Keep Abreast, and a few others.

The tune will always tell you what it needs and what it doesn’t. That’s the hardest aspect of creating shit solo: no one to bounce ideas off of. Gotta make sure you listen to your initial instincts and follow your gut.

Are there any highlights amongst your many collaborations?

Highlifes, for sure. Gotta be nice and cold though. Playing with friends is always a treat. It’s rare that any of us get the time to just exercise our minds and demons through music, but there are a few collabs, the latest with Money Mark and Shawn Lee. We have a record out called Lord Newborn and The Magic Skulls. Good times. There’s a collab with Prefuse73 on a track on his album One Word Extinguisher. There’s the Blktop Project: me, Ray Barbee, Matt Rodriguez and Chuck Treece. I did a Gangstarr remix for the EA skate videogame. That was cool…um. I’m old and my brainpan’s leaking. 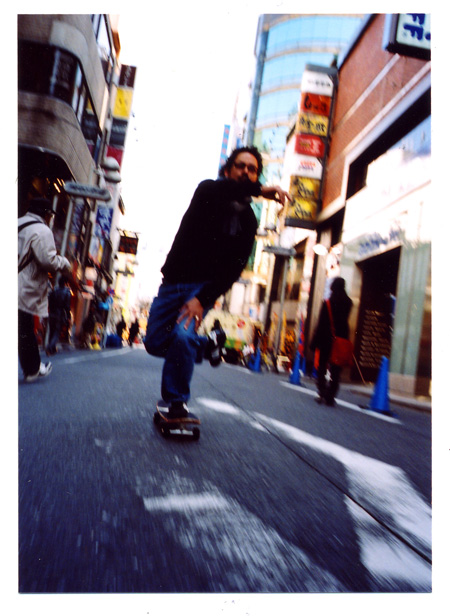 Can you talk about the Blktop Project? How it came about, who’s involved, and what that experience was like?

Blktop came to be because of a trip Mark Whitely and Slap mag engineered, in 2002. It was me, Ray, and Matt, cruising, and noodling on the guitars, and Mark and Joe Brook leading the charge. The idea was to cruise Route 66, the old blues trail, skating and making music along the way. We had a few instruments and a 4-track cassette recorder. We stopped in Chicago and recorded a couple tracks with Doug Sharin at his place. The rest was the trusty 4 track, recording in hotel bathrooms, living rooms, outdoors wherever/whenever the inspiration hit. We decided that at the end of the trip we’d release the tunes via Slap mag site for free. We got Chuck Treece involved, after the trip, to play on a few more tracks, to fill out the record. We released it on Galaxia years after the trip. History made from history past.

Who are your partners in Jet Black Crayon, and how did you guys get together?

Monte Vallier and Gadget. We have been friends since the dawn of man. I knew Monte from skating, back in the late Ã¢â‚¬Ëœ70s, then thru the punk scene a few years later. Me and Gadget met through a mutual friend. He was a DJ when he was in his teens. It was formed out of necessity. Isotope 217 asked if I wanted to support them on a tour. I didn’t want to pass up the opportunity. I love those guys! But I didn’t feel the TG steez would really fit with their style, so I created a whole bunch of stuff on bass, and got Monte and Gadget to help out. Two bass players and a DJ.. Just odd enough to work…

One of the band members described the Jet Black Crayon sound as “cinematic” and I also read that you wanted to score films. In the meantime, you actually have scored music for film, right?

It definitely has that feel, and we approach it with visuals in mind, like a film that doesn’t exist but has a score. I wouldn’t call what I have done “scoring.” I’ve made tracks/sounds specifically for films and documentaries, but haven’t had the chance to really create sound for/to a film. Would love the chance though. My new record might be that score.

What was your experience providing music for “Hand Made Modern” on HGTV like?

They just licensed a bunch of existing music. Todd Oldham digs my crap, which is very cool. He’s a nice guy. It wasn’t a bunch of loot cakes but better than a kick in the balls. 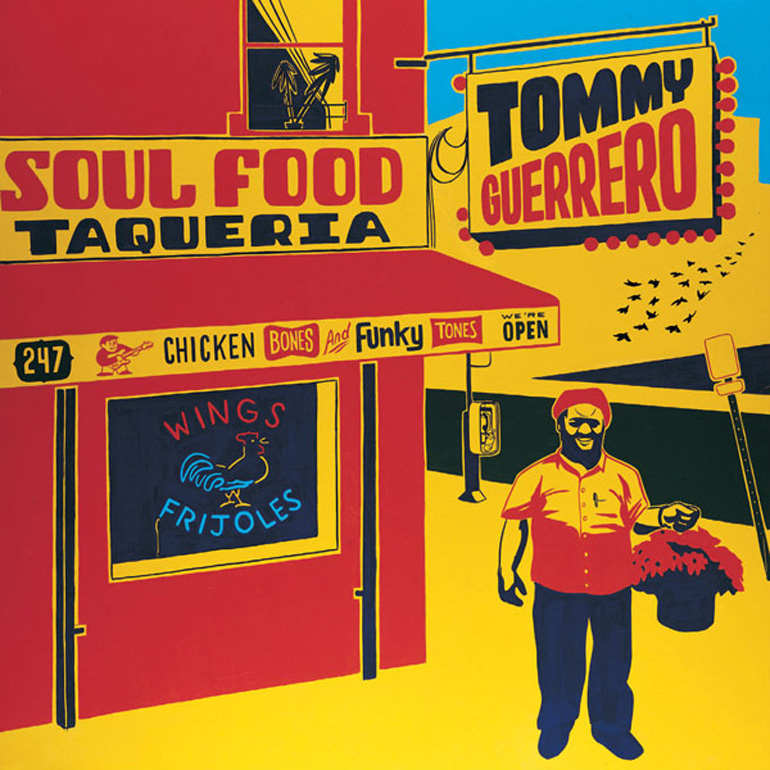 How did you link up with Mo’wax and what was the remix project with them like?

Shit, that was long ago; I’ll give the short version. A cat who worked at Mo’wax was a skater. He hipped James Lavelle to the music I made for the 40’s vid, way back. James dug what he heard and contacted me. Then I was put on the backburner so Thomas Campbell and I decided to release it on Galaxia, and added some new tracks. James then heard it and wondered why they hadn’t released it, so the deal was back on the table. They released A Little Bit of Somethin’, Soul Food Taqueria and the EP Junk Collector. I wish they were still around. James is a cool cat. He let me do whatever I wanted. He understands that the art/packaging is almost as important as the music. It has to be whole as a project.

I’m super fortunate to have those people and their energy grace my shitty little albums! Soil is Barry McGee and Return of the Bastard‘s text is Natas (he

also did the text for my 1st record loose grooves and bastard blues) and I took the flicks and did the layout. The new one is by Evan Hecox. He rules.

Speaking of art, what does your role as Art Mis-Director at Krooked entail? Do you get to play a role in selecting some of the amazing guest artist decks, which have been produced too?

I am the computer jockey racing the deadline train. I do most of the layout, design, grunt work, with help from DLX production/art crew. Yeah I pick a lot of the guests, as well as MG and input from everyone around here. It’s very democratic, for a bunch of socialists.

It seems like you’ve been putting out an LP or EP at a rate of about one per year. Can we expect something new soon?

Hell yeah. I just finished a new album. Not sure on release date. A slightly different version is out in Japan only. I added a few new tracks and have taken a few off. From what I’m told, it’s my best yet… “best” compared to playing a kazoo through your nose into a trash bag? Then, yes, I think so as well. Many thanks to everyone who has supported me over the years! Be kind to each other 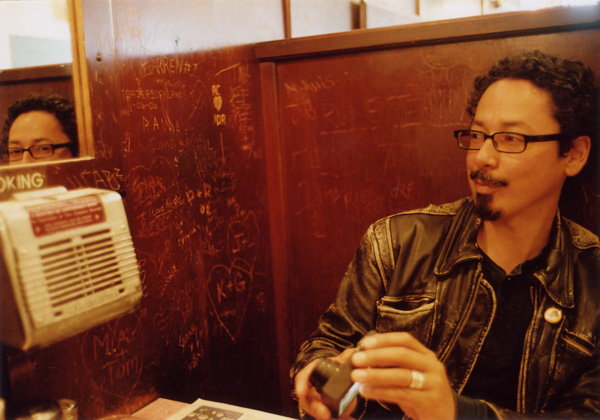