What was your entry point into the design field?

I was an intern for an illustrator ofchildren’s books. She worked out of her apartment on the Upper West Side of Manhattan (Woody Allen’s Universe.) She was paid an advance and got 6 months to complete her work. Macs were just coming into use and she was talking about buying something called a ‘scanner’ to get her reference photos into the computer. From there I interned at Jive records and The Source Magazine’s Art Department. My first actual paid position was as a Junior Designer at Arista records.

The possibilities. Originally I just wanted to be an illustrator. I’ve drawn and painted since I was a small child. Growing up I was always drawn to advertising, packaging and logos. I had no idea what it was called, but I knew what I enjoyed looking at. I made sure I was there when my Mum went to the supermarket every week. I have to think that the colors, textures, lighting, signage and packaging all fueled what I do today. Also being a big football (soccer) fan, kits and pitches have been plastered with branding and logos when I really started paying attention to the broadcasts.

As an intern at Jive, when I saw what Nick Gamma was doing it blew my mind. He went from his drawing table to Photoshop 2 and Quark Xpress, that was it. This was how I could bring all the different things I loved to do into one role. Art Director. 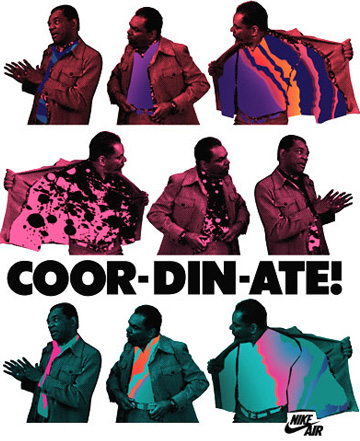 And how did you end up doing so much design for clothing labels?

In 1999 I was growing bored with the music scene and was looking for a new challenge. My friend Alyasha had just launched his brand Alphanumeric and was serving as Creative Director of it and Mecca. I went to Mecca as Art Director. It was a great place to put everything I knew to use. I created campaigns from thumbnail to printed piece with a small team. Photographer Christian Lantry shot most of it and also I shot the old Brand Nubian art for my campaign. I got to write the copy and design packaging for clothing which was new to me at the time. As I moved around certain jobs in fashion, that was the role I played in most. Some were enjoyable, some were not, but I settled well at PRPS / Akademiks for four years.

Eventually I moved on and went independent and that’s where the most enjoyable work began.

Can you mention some work you’ve done for various labels?

Back in 04, I did the READ BOOKS, GET BRAIN campaign for Akademiks and it was particularly satisfying when it hit page 3 of the New York Post. We had all of the local television channels, The New York Times, Ad Week all asking if it meant what the Post said it meant. It was great! Whenever I can communicate different messages to different viewers in the same piece, it’s magical.

I enjoyed working on the GOODFELLAS piece for Real Real Genuine that featured two Templars standing on the sea shore. Very simple and to-the-point. The DON LOGAN’S RUN art was a close second.

Another favorite is the HEROES art for Fiberops. This was Alyasha’s idea and I executed it. Sid Vicious, Christopher Wallace, Joe Strummer, Peter Tosh, and Tupac Shakur side by side as soldiers. A good collaborative effort.

But creating socially and culturally relevant work begins with the intention. You have to do it because you’ve set a standard for yourself rather than being forced. 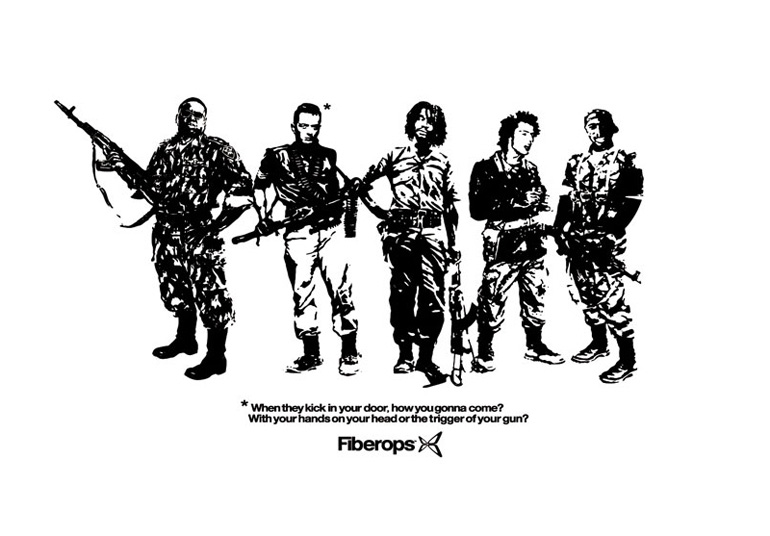 You’ve worked with some of the biggest names in street fashion, and your work is incredibly well-respected within the industry. When it comes to your own wardrobe, what are your personal tastes like?

I-like-what-I-like so I stay far from the blogs. For me, that spoils the joy of searching for myself. I’m pretty conservative these days and I try to only support brands who stand for craft and tradition. I won’t wear anything that I might look back at in five years and laugh at. My Father is 67 and sharp to this day so growing up and seeing his Wrangler shirts and Pringle sweaters had a huge influence on me. My mother kept me sharp so as a boy, I was Fred Perry king. Polos, windbreakers, v-necks you name it.

My favorite jeans and trousers are by Full Count for the fit. They are perfectly comfortable and low key. I have heavy military leanings and the Black Adidas Sambas are a constant. Paul Smith is my favorite and I’m still a huge fan of what Hardy Blechman does with Maharishi.

What do you currently spend the majority of your time working on?

Lots of logos and identities lately. Packaging, web sites and music-related pieces are a constant as well. Besides that, I’m creating content for my blog and really excited to start teaching. It’s something my colleagues have always pushed me towards but I’d been waiting for things to calm down. Once I realized that things will never calm down, I jumped in. So we’ll see where I end up. 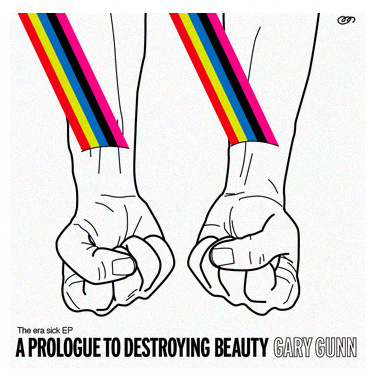 Managing different clients can require tremendouspatience. Without naming any names, do you have any horror stories you care to share?

Oof! I have plenty of those but they all seem to have a common thread and they’re probably pretty similar to most creatives’ nightmare accounts. A common one is, if a client wants a logo myquestion is always ‘What do you want to say?’ From there it is my job to find visual solutions and alternate methods. But on several occasions I have given a client 3 different options and in the middle of explaining why certain decisions were made and the different directions in which we could take their ideas, I realized that they didn’t really care about saying anything. They just wanted it to look like someone else’s logo they’d seen. That ‘We-should-be-doing-what-they’re-doing’ way of thinking is pretty common at most companies. All I can do in those cases is give the best advice I can. Whether they take it or not is another matter.

In this field, clients see you in one of two ways: As a pair of hands or as a thinker. Anyone can arrange things to look cool or hot, or whatever word is running at the time. But creating socially and culturally relevant work begins with the intention. You have to do it because you’ve set a standard for yourself rather than being forced. Also, that natural push and pull between me and my client is essential because that is where meaningful work is forged.

I’ve found that if you are working with the right people, everything falls into place and vice versa. So these days, like Frank Rizzo, “I only work with a good firm.”

When it comes down to it, do you prefer to work with magazine layout, album cover art, providing corporate identity, doing clothing graphics, or some other medium?

I enjoy doing all of it. The mix of mediums keeps me from getting bored and I work best when I’m swamped. Ideas flow non-stop for me, so I really create out of necessity. I have to find homes for these ideas.

Similarly, do you have a preference for doing things on the computer or by hand?

always do thumbnail sketches and think things through before I sit at the computer, so it’s all organic for me. A MAC is only a tool. I’ve seen people get caught up in the technical side and miss the point that it’s about using those tools to say something.

Is there a (creative?)field you’ve yet to try your hand at which you’d like to have a shot at?

Food packaging! Definitely. I must write and illustrate a children’s book as well. 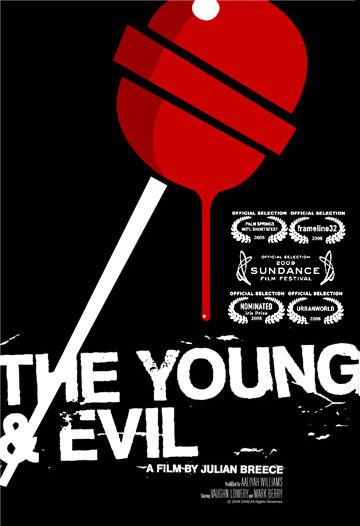 As someone who has provided identity and designs for many, many clients, who do you look to for inspiration in the visual arts (if anyone)?

Those who influenced me: Saul Bass, Tibor Kalman, Oliviero Tosscani, Jack Davis, Sagmeister and so many more. Also people like Brent Rollins of Ego Trip whose style was huge for me when I was developing a voice of my own. Also Ebon from Stereotype – ridiculously good stuff. Alyasha Moore (Fiberops) and Andrew Lee (Invisible Man) are examples of the best creatives who would be doing what they do no matter who was paying attention.

I’ve been at this for over 15 years and I’m still learning big and small things about the field. Inspiration is one thing, but education is just as important. I keep my head in the books and brushed-up.

What became of Rinse & Repeat

Er, nothing. Ha. I didn’t have time to continue. It was a case of me spreading myself too thin. It still has the possibility of coming back especially with the Tea Partiers giving me so many ideas.

What is Foolish Mortals all about?

Foolish Mortals is a project that Marc Gunn asked me to collaborate on. The name is about us as a society – What we say vs. What we do. The question is what are we going to do with the privileges we’ve been afforded? We can sit around and be fashionably cynical or set upon changing the world like Foolish Mortals.

Keep up with Anthony at: