The Journey is the Destination :: An Interview with Tommy Guerrero

In my opinion, the word “legend” is thrown around too loosely these days. Despite that, there are times when the word is perfectly appropriate to describe someone. Take Tommy Guerrero, for example (even if he’s much too modest to accept the title). He was my childhood skateboard idol—the first pro to be known for street skating, and a member of the illustrious Bones Brigade. After that, he helped found one of my favorite companies, Real Skateboards, which has been an institution in skateboarding for over two decades. He makes music so incredible that it’s hard to describe when you tell people about it. And he’s capable of taking Mark Gonzales napkin doodles and faxes and turning them into completed skateboard graphics for Krooked. Words can’t describe Tommy’s creativity—the dude is a genius. He took the time to answer a few questions about his roots, skateboarding, music, and art as he prepares to go on a small tour in support of his new album, Perpetual, which is out now. 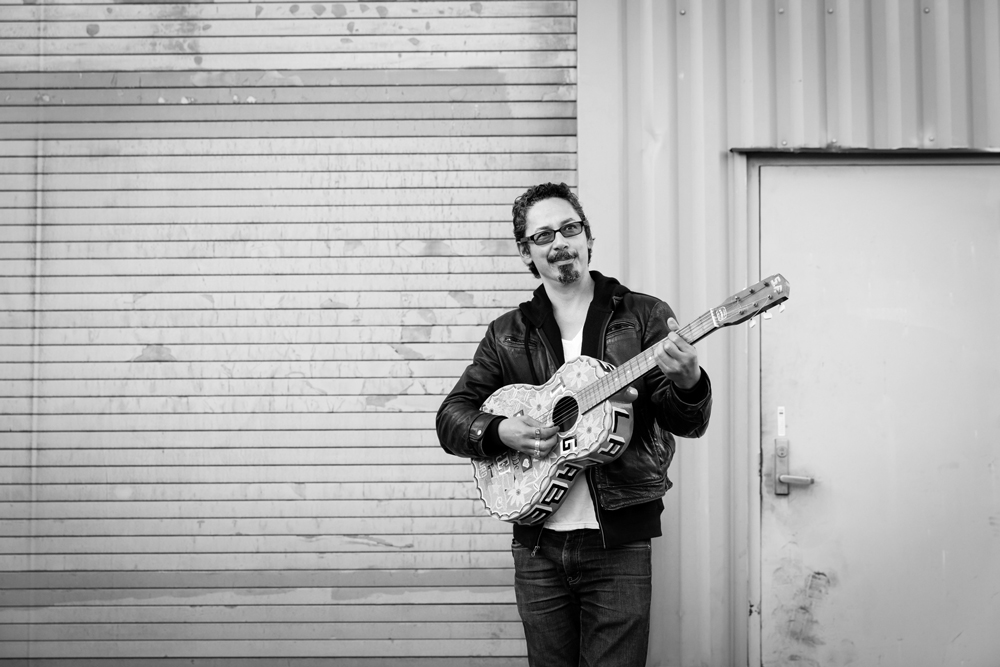 How did you first get into skateboarding when you were a kid, and what influenced you to start skating?
A friend gave me a Black Knight board with clay wheels. I lived on a hill—the one from Future Primitive and The Search For Animal Chin—so what was I to do but go down it? It was a challenge to say the least with those wheels. After the first couple of times, I was hooked. That damn kid turned me into a skate junkie, and I’m super grateful!

What was the skate scene like in San Francisco when you were growing up?
Initially, there wasn’t one. I started in 1975, and it was just me and my brother for a while. Then we met a handful of other skaters—Bryce Kanights and Ray Meyer, who also became pros—at a schoolyard down the block from our house. That was around 1977 I think. After that, the schoolyard was our meeting place. Pretty soon, more skaters started showing up. Eventually, it became all about the hills. We’d take a bus from the local skate shop all the way up a series of hills, about 1.5 to 2 miles worth, and cruise down. It wasn’t about bombing, we’d hit all of the driveways because they were like banks. It was the closest thing we had to skate parks. We would grind the steps, curbs, and anything that we could find. This was before the ollie came to be. We’d do that all day long for the cost of one nickel.

“SKATING WAS ALL ABOUT NON-CONFORMITY. IT TAUGHT ME EVERYTHING I KNOW, REALLY.”

What were the primary spots and contests during that ‘80s era?
We skated the streets of San Francisco and hit up almost every nook and cranny. The spots were mostly hills, curbs, and walls. There was the Safeway Curb, Whale Banks/DMV, Fort Miley, the Dish, and the Beach Curbs. We were really just cruising around the entire city—we had lots of one-hit spots downtown.

I never left the Bay until Powell sent me to my first competition around ’83/’84. I had never even been on a plane—my mother didn’t have a car, so we never went anywhere.

We’d get to local Bay Area skateparks via Bart or bus, and once in a while, an older cat would drive. I had been entering local comps since ’77. I still have the trophies from that era—I’m kind of a hoarder. The competitions were mostly in the Los Angeles area, but the first couple of “street style” contests were in San Francisco, and there were also a couple in Sacramento and Santa Cruz.

San Francisco has always been a very culturally rich place. What were some of the things outside of skateboarding, as far as art and music, that were going on in the city at that time that influenced you?
There was always shit happening in the city. There were a ton of clubs playing ’80s music, but I was interested in punk and metal, although I was heavily into The Cure, New Order, and Joy Division. I mostly listened to late ’70s and early ’80s punk, new wave, and heavy rock—all of the English punk bands at first. Then, when punk really hit the West Coast—it was more local bands. The scene was booming around 1980 through 1984, for me anyway.

I was, and had been, playing music since ’78 or so. I was actively playing until our last band, Free Beer, ended in ’84. I turned pro in ’85, so I had no time for a band because I was traveling all of the time. I was still playing when I was home, it was just solo. I didn’t really get into the art trip until the early ‘90s .

What influenced you to start playing?
I think it was when I saw The Ramones around ’78. They played a free show in front of San Francisco City Hall. Me, my brother, and Bryce Kanights cut school and went to check them out. The scene blew my mind wide open! That changed everything.

Your skateboarding was very public during the ‘80s and ‘90s, but you did not become well-known for music until later on. Were you playing a lot during your pro career or did you get more into that after?
I’d play when I had the opportunity. But, I couldn’t manage being in a band because I was never home. When I left Powell and helped start Real, I had more time. I started making beats around ’91. That’s really when the solo thing started. Although, I bought a four track and a drum machine in ’86 with my first check from Powell. I have four track tapes somewhere from that time—they’ll never to see the light of day! 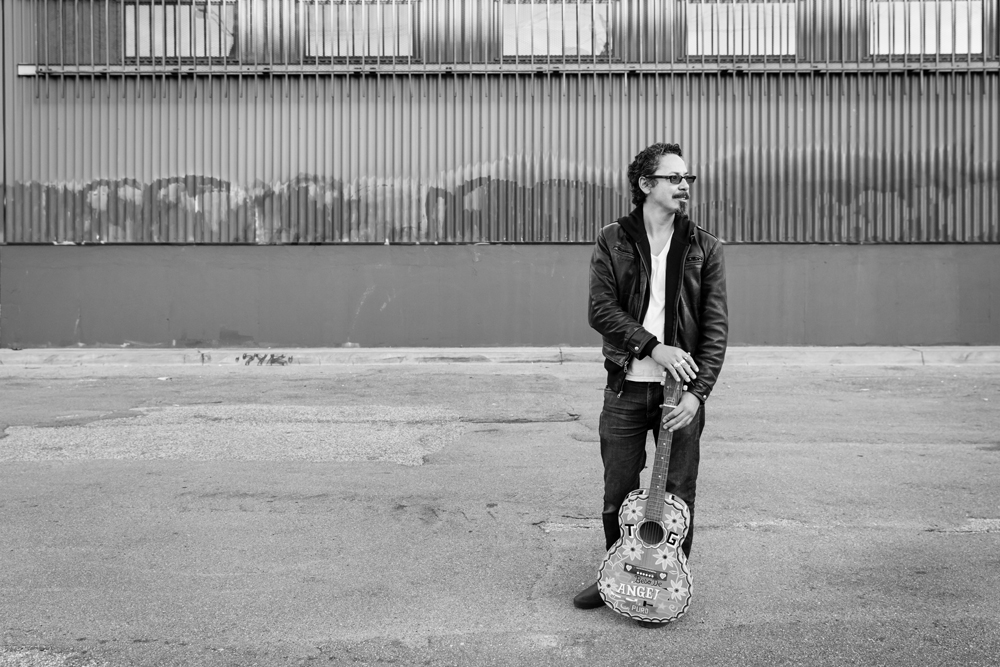 “STAVING OFF INSANITY IS THE KEY MOTIVATOR [THAT DRIVES ME]! BEING A SPAZ IS THE COHESIVE ELEMENT.”

Both skateboarding and music are very improvisational. Do you find similarities between them?
The connection for me is the meditative quality that they both have. You let go of all of the shit in your head and just be. There is an improv side to street skating and my approach to music. Even though my tunes have some sort of structure and melody, I never play a song exactly the same. I’m not even capable of it—too ‘tarded!

I’ve heard that you work with Mark Gonzales on Krooked’s graphics, and do a lot with coloring and prepping his art for production. Can you tell us a little bit about that process and how you and Mark work together to create the finished product?
I did for about seven years. I’m more hands off and just help with art direction. I have known Mark since ’84 or so—before either of us were pro. I met him in Venice at a freestyle competition of all places, so we have a long-standing connection. He sends original art most of the time, but I have received napkins, box doodles, letters, and postcards. He went through a period where he was faxing everything because he was living in France. That was real fun to deal with! Sometimes he’ll send a realized design, while others are created from disparate images gathered over time. I’d scan them all and try to create a cohesive graphic that would work on a board. Deck shapes are not kind to a pleasing aesthetic in my humble opinion.

Your music is really unique, it’s actually hard to describe when I tell people to check out your stuff. How would you describe your sound and what influences you musically?
I’m glad that it always challenges people to describe what I do. I can’t be labeled nor corralled into a neat little sub-genre and marketed. Skating was all about non-conformity. It taught me everything I know, really. I just do what comes naturally—working with my limitations to produce a unique voice, maybe. Or maybe I’m full of shit!

Staving off insanity is the key motivator! Being a spaz is the cohesive element. The need to be creative for whatever reason. Whatever is out there relaying all of this information—I’m just the conduit.

You’ve got an album coming out in a couple of days and a small tour in November. How long have you been working on this project and what stands out to you the most about this album?
The new album is called Perpetual and is the continuation of an album that I released in Japan exclusively last year called Perpetuum—it was never released anywhere else. Perpetual has a few new tunes and art by Chris Johanson. This album has been in the works for a year and a half. It was all recorded on an eight track tape machine. No computer involved, except to create the final master, and no editing, sound manipulation, etc. That’s why you’ll hear all the mistakes and sketch shit—oh the humanity! It’s much more mellow than past albums, but not in a passive way. It’s about the journey and not the destination.

Skating, music, and graphic work are all very creative pursuits. What drives you, creatively, to produce in all of these different mediums, and do you feel that that there is cohesion in what you do?
Staving off insanity is the key motivator! Being a spaz is the cohesive element. The need to be creative for whatever reason. Whatever is out there relaying all of this information—I’m just the conduit.