Anthony Spadaro might not be the guy you expect to shake hands with when you set up to meet the founder of Tiny Empire, a juicing outpost in Williamsburg. And yeah, that statement admits that you’ve made some assumptions and have some preconceived notions about the guys that run juicing shops, but it is what it is. Spadaro though, with his tattoos peeking from under his shirt, and ears that have obviously been gauged at one point, wasn’t from that same breed of guys. 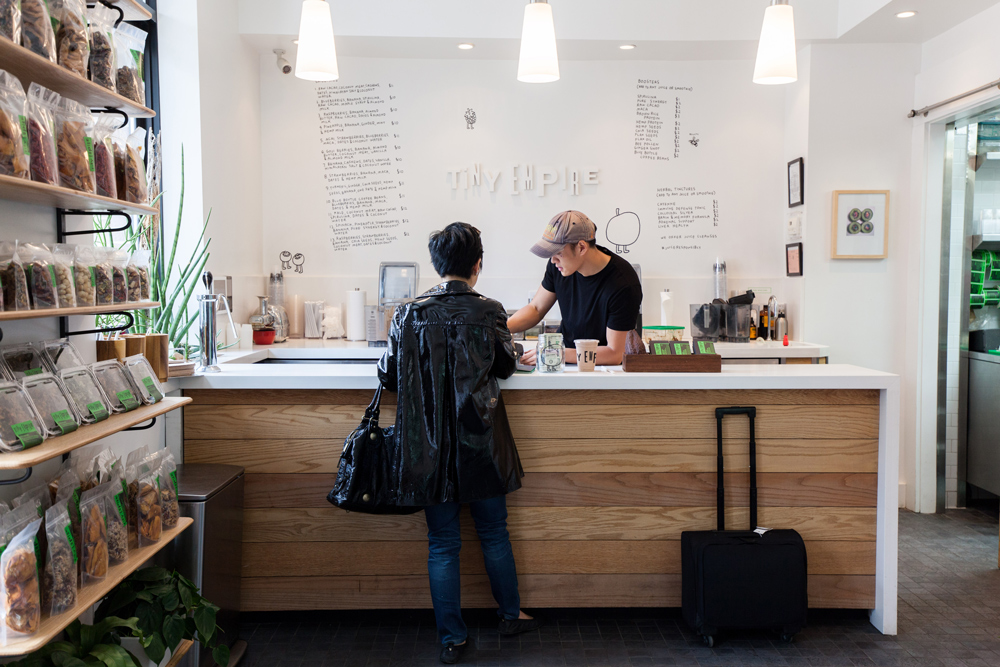 This new breed of juicers is more of a, Tiny Tumeric after a night of too many vodkas, or a watermelon, lime, and young ginger cold pressed juice while trucking through Cinco de Mayo festivities. It’s not some overthought, uptight, all juice all the time, on the way to yoga with my hemp bracelets and trousers sort of fam of a few years ago; never that.

“We don’t get a lot of the fundamentalist character here,” he admitted to us when asked about the sort of customer that walks into the North 6th storefront. “That’s just not been my approach. My concept is really just: a place where people can just grab anything off the shelf and know it’s been responsibly-sourced, it’s high-quality and it’s good for you. We don’t need to have these elaborate conversations about things we don’t really know about.”

The thought is refreshing. Why talk about these theories and concepts of what might happen if we XYZ? Why not just grab a juice – or a smoothie, yeah probably a smoothie – and talk about something else? Like Spadaro’s tattoos. “[I was a tattoo artist] for about 15 years. It was cool because that’s what I wanted to do when I was like 13. 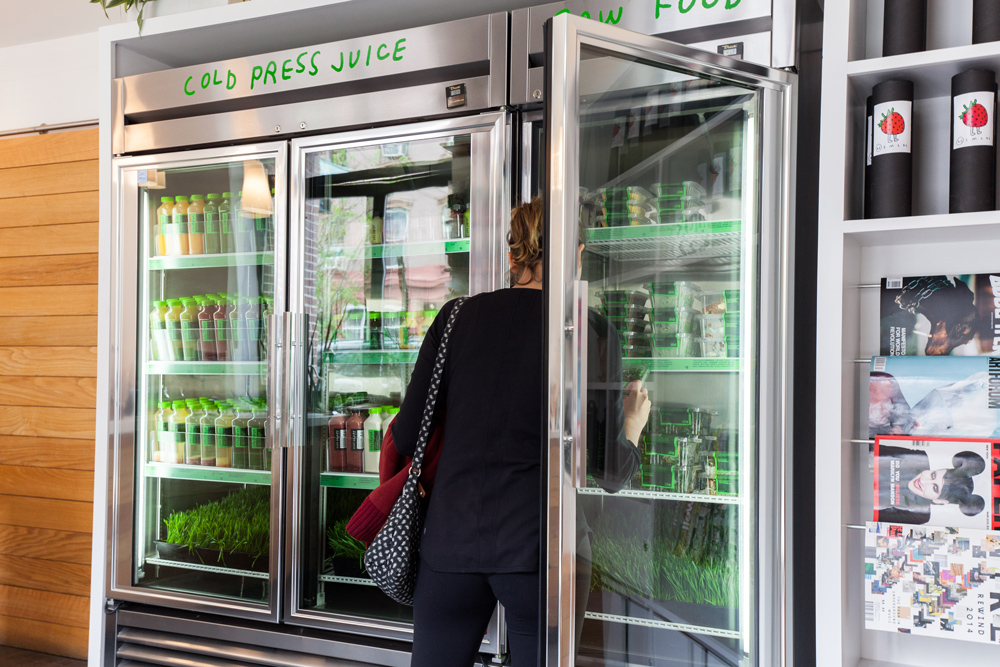 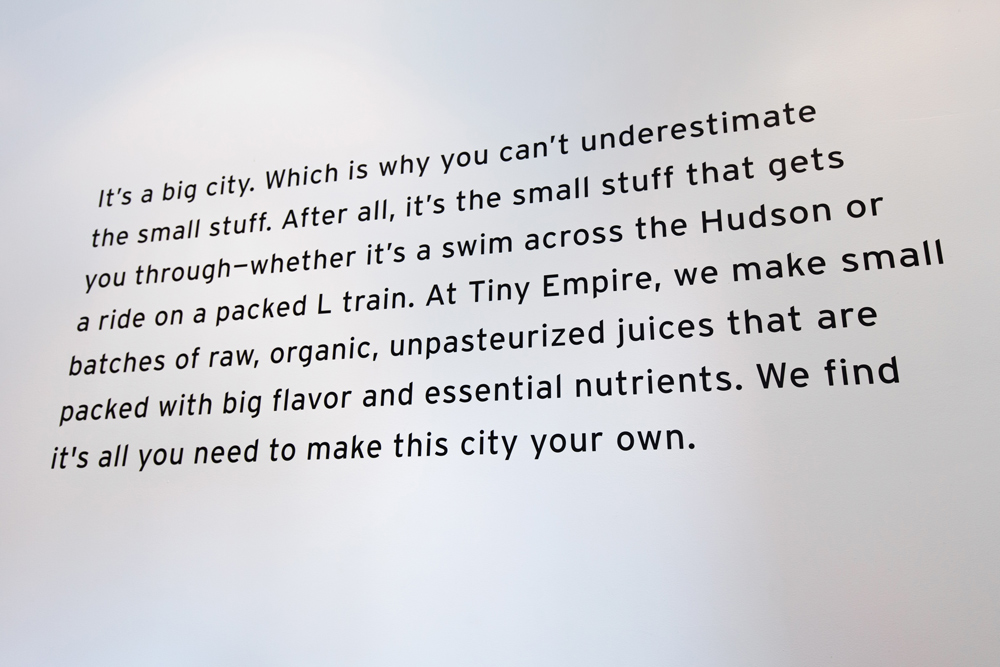 “It was great; I got to work at the shop that I always wanted to work at that all my heroes worked at but eventually, the lifestyle kind of got to be a bit much. Tattooing changed, I changed and I sort of went to plan B which was juice and high quality food.” Okay, it wasn’t as simple as that. The former skateboarder did one day decide not to do tattooing but there was a bit of fumbling before Tiny Empire was the obvious next step. But eventually he figured it out and set up shop about three years ago hocking juices, smoothies, salad, and granola

Why not talk about the company’s collaboration which are typically long term and include names like pro-surfer Mickey De Temple, Patagonia ambassador/snowboarder/rockclimber/surfer/humanitarian/environmentalist Forrest Shearer and the artist Jason Polan. “I want to sponsor and partner with someone where there’s a real back and forth, deeper communication; someone who wants to be involved with the brand,” Spadaro asserts. 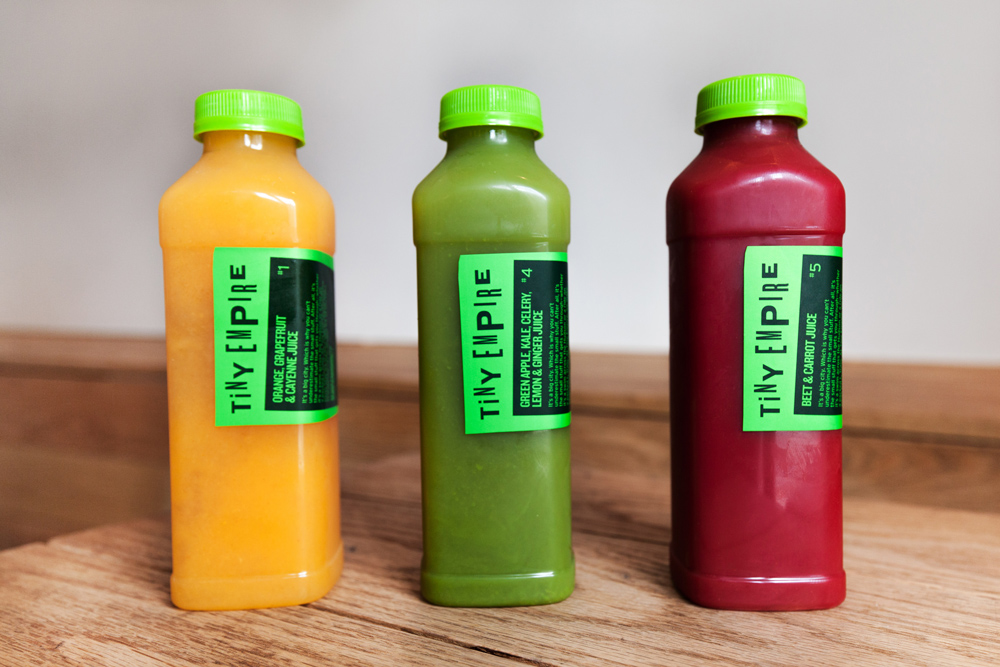 In the case of Polan, that deeper conversation has played out in the Williamsburg conversation, where the artist has designed everything from the menu to the Department of Health signs. Come early July, there’ll be another artist on that roster: Richard Phillips.  Phillips will be one of the lead collaborators on a second space in Soho where he too will have a heavy hand in the design process, including even a one-wall mural. And there’s no doubt it’ll be his work, hopefully an amazing mini-ramp in someone’s backyard, and whatever insane party happened the night before that will be talked about. Not some philosophical chatter we really don’t understand.