He Found BIGFOOT :: The Story of Bob Chandler and the First Original Monster Truck

Bob Chandler remembers it like this, “I just wanted to be bigger than everybody else, ya know? It’s like a kid thing.”

The late ‘80s was a time of reflective wraparound shades, mustaches and mullets, and commercials promoting monster truck rallies with a fiery fervor. Explosions everywhere, gargantuan trucks trouncing cars. My little kid brain supposed that the trucks drove themselves, their anthropomorphized names signalling their autonomy. There was always the gravelly-voiced announcer detailing the event, and without a doubt the blue granddaddy of them all, BIGFOOT. 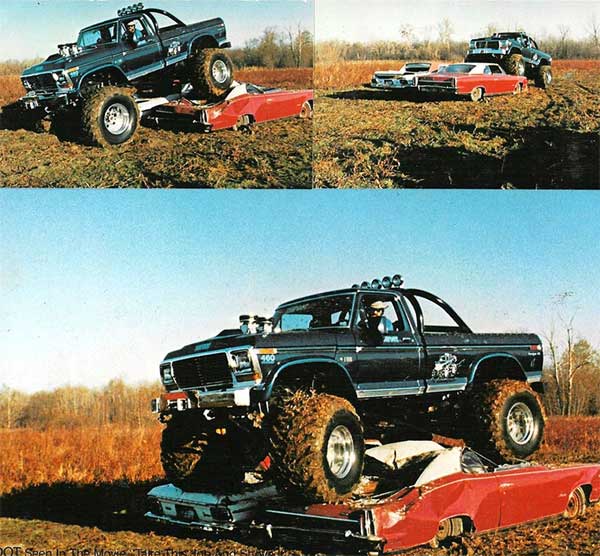 BIGFOOT’s Bob Chandler has the most unrivaled—and American—story of all American Dream success stories: He turned kicking it with his friends and family into his profession, and invented a completely new motorsport in the meantime.

You see, Bob Chandler’s passion for off-roading in a 1974 Ford F-250 led to the creation of a an entire industry. “Actually the name monster trucks came about at a show in the Pontiac Silverdome—the largest single day monster truck event ever. Bob George was the announcer. I came into that show—I had military axles and 48-inch tires on the truck. He started calling Bigfoot a ‘monster truck.’” The blue behemoth yanking a sled over dirt, then cascading over a stack of smashed cars effortlessly, is a testament to precision engineering.

If you missed the ‘80s, Monster Trucks are what pickup trucks look like when they put on Jim Carrey’s metamorphic mask from that movie. They are what trucks would look like if they could enter the league on performance enhancing substances—bigger, louder, more powerful, and honestly, what you pay to see. Like kettle corn at the carnival, the bouquet of the monster truck demo coils up to the nose before assaulting your eyes and ears. It’s unmistakable rubber and exhaust. Gasoline navigating the rim of an injector, oxygenating around the shaft of a piston, and then finally rocketing off to the folds of a face near you. 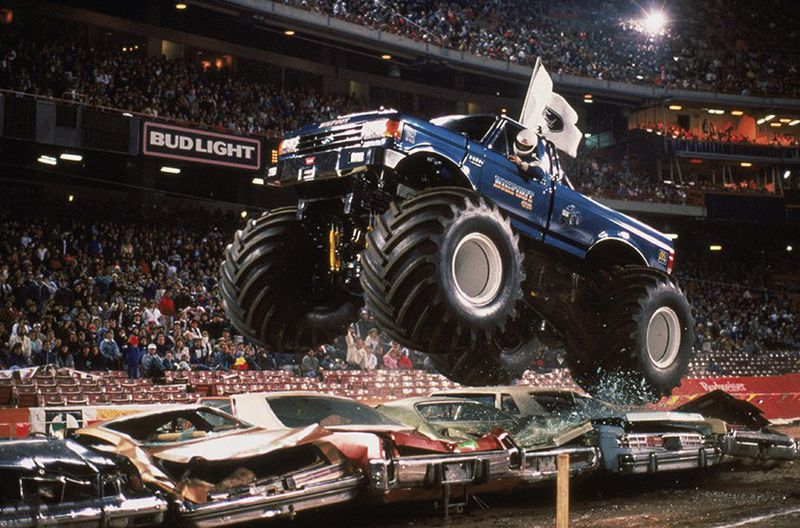 Bigfoot sails over junkers at a 1989 Anaheim event.

But something so big had an innocuous start. Chandler’s baby—a truck lineage known as the BIGFOOT line—is the star.

BIGFOOT’S story is sunwashed voyage into Americana antiquity. Beginning in the Midwest, where the Chandler family and neighbor Jim Kramer open Midwest 4 Wheel Drive Center out of the Chandler family garage, primarily to sell 4-wheel drive products. As Chandler tells it, “I never really had the intent to build monster trucks—it was just something that happened. I was just trying to stay ahead of everybody else, bigger than everybody else’s truck, go more places than everybody else’s truck could—that’s where the tires come in.” 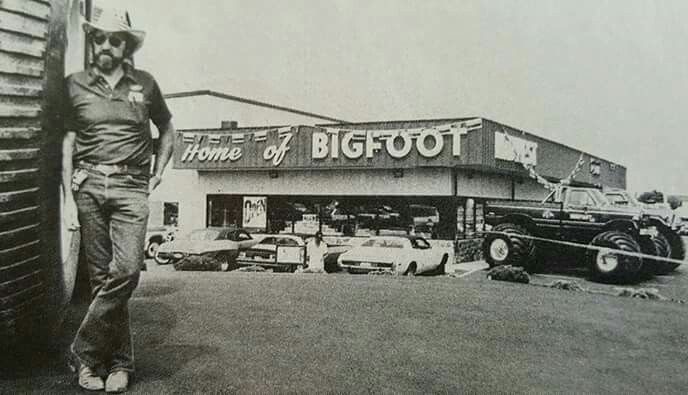 Bob’s souped-up Ford was really just a means to showcase custom products at truck shows, and on the weekends, a thing to do with the wife and kids. He recalls, “My wife and I, and my kids would go out camping on the weekends. We put a camper on the back, go as far as we could on a creek bed, stop, take the camper off the back, and mess around with the truck all weekend.”

That same F-250 started appearing at off roading events bearing the MW4WD logo, with spruced up axles and bigger tires to capture the eye of their products. “I never really had the thought to build a monster truck. I kept putting bigger and bigger tires on it, and I broke axles. So, then I put bigger axles under the truck, then I didn’t have enough power, so I put bigger engines in the truck. It was just kind of a vicious circle for three or four years.” As they remember it, Bob had a ‘lead foot,’ and thus the F-250 became known as the first iteration of BIGFOOT. “The truck gradually got to be its own star.”

By the early ‘80s, BIGFOOT became a full on attraction unto itself, appearing at a Denver car show, literally crushing the early ‘80s with car jumping events, and the original BIGFOOT becoming “cloned,” as they tell it. Then came BIGFOOT 2, BIGFOOT 3, and so on. Its various iterations all shared the same name and ethos, and grew in production value and scale as time went on.

Like the trucks themselves, the fanbase grew as the BIGFOOT team took to monster truck racing, eventually dominating the field. By the mid-‘80s, technology had entered the arena, and the demand for more BIGFOOT outsized contemporary race framing for the trucks. Luckily, Chandler taught himself how to use the design technology—Autocad—and pioneered the now industry standard—tubular chassis—which first made its appearance in BIGFOOT #8 in 1989.

Actually, the eighth BIGFOOT was itself a marvel of technology and innovation; according to the Bleacher Report, “Today’s monster trucks are now more well-designed, more powerful and safer because of what Bob Chandler started back in 1989 [with BIGFOOT #8].” Because it was so advanced in design, BIGFOOT #8 became a controversial figure in monster truck history, getting banned by the TNT Renegade Monster Truck Circuit after winning 12 of the season’s 15 events. It was another case of BIGFOOT and Bob Chandler arriving in first place: “The industry had to change with the times. Chandler happened to be the first one to make such a change, and the other drivers were not prepared for it.”

Today, with the iterations of BIGFOOT now in the 20’s, the MW4WD team has joined the hybrid craze, with the construction of the world’s first and only battery-powered monster truck in existence. This new system hosts an astounding thirty batteries for total power, and another six just for powering steering and breaks.

Accordingly, the BIGFOOT team has expanded, but is still all family run and operated, with Chandler’s children and son-in-law managing day to day operations. Their fleet of over 10 trucks driven by a humble crew of 20, ensures that the brand is in the hands of just a few, gripping onto the essence of panache and quality control that first birthed the big blue monster.

The Chandler family and their close-knit BIGFOOT team have continued to show dominance in their sport. Their innovations in technology run concurrently with their product, and their ability to switch things up time and again cements their lordship over the competition.

The Hundreds X BIGFOOT releases this Friday at The Hundreds Los Angeles, our Online Shops (US and UK), and select domestic retailers. Buckle Up! Here's 10 of the Most Badass BIGFOOT 4x4 Monster Truck Videos Ever

Kazie Holiday
In the mid-'70s, Bob Chandler souped up his Ford F-250 with gargantuan tires and created the first original ’monster truck.' In celebration of the Hundreds X Bigfoot dropping this Friday, we asked ...
HIDE COMMENTS