The Resilience of Dizzy Wright

Dizzy Wright gave his all into creating a positive image for the indie label Funk Volume, which disbanded just a few weeks ago. Rather than wallow, the Las Vegas rapper has channelled his energy into keeping his career ablaze. In the wake of the label’s collapse, Dizzy immediately set up a solo website, released an EP (Wisdom and Good Vibes EP), and embarked on a 44-city world tour with Logic, which sold out Hollywood’s 3700 capacity Palladium this past weekend. His resilience and continued focus are partly due to the fact that creating hip-hop doesn’t feel like work to Dizzy. Starting his rap career at just 8 years old—his mother was Bone Thugs-n-Harmony’s road manager in the ‘90s—Dizzy admits, “I kinda just live this hip-hop shit.” I caught the ever-positive Dizzy on the phone just before he was about to embark on his tour. In our conversation below, Dizzy discusses the ache of losing Funk Volume, how an unstable upbringing made him who he is today, and why he wants to give listeners something to believe in. 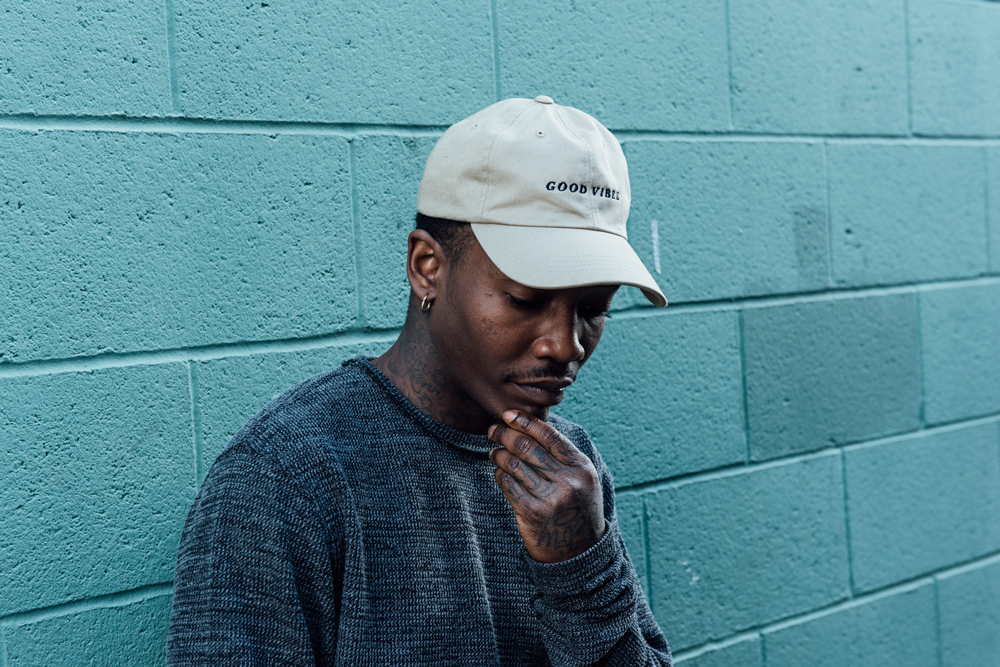 ANNA DORN: I read your statement in HipHopDX about the Funk Volume disbanding, but I was wondering how you feel about it—whether you think it made sense, or whether you’re sad about it?
DIZZY WRIGHT: I’m definitely sad about it. Not trying to be sensitive about it, but I kind of am, because I had a lot of faith in it. And I put a lot of work into solidifying my position. And being that guy on the label that’s that positive influence to everybody around me. And when I couldn’t achieve that, you know, at the end, it was very upsetting. I just felt like, damn, you know? But I’m still moving forward with the same people who were behind me while I was with Funk Volume. So I’m not that sad. If I had lost my whole team, it would have been super sad. I wouldn’t have been able to drop this project the way I wanted to had I lost everything. But I really just lost the foundation. And, you know, that sucks.

It seems like you’ve kept it going impressively, with your EP dropping and your new website going up. How do you stay focused?
Shit, I was focused before everything happened. It just sorta happened on Funk Volume, you know? And I just had to be like—well, I guess I’ll do it myself! But I enjoy what I do. I enjoy making music. I enjoy improving. I enjoy getting that constructive criticism and feedback. I enjoy putting good music out in the world that I feel like may not be out there in the way that I’m trying to give it to them. I enjoy the rhymes, I enjoy the interviews, the talking about it, the backing up what I’m talking about. I just enjoy all of it. Like, I kinda just live this hip-hop shit.

So it doesn’t feel like work to you?
Nah.

You said you want to put out something that might not be out there. What is lacking in current hip-hop, and how is your music different?
I just gotta give em something else to believe in, you know, something else cool. I’m not gonna take away from what’s out there. There’s a lot of good shit out there. I just wanna add a different message. I just wanna be in the lane where I’m considered one of the greats that didn’t just talk about one topic, that didn’t just rhyme one type of beat, or just had a specific sound and that was all he could do. I wanna continue to be able to impress people. And be positive, and make that look cool.

How old is your daughter?
She’s four.

Well, I know you started rapping when you were really young, so I was wondering if she was going to follow in your footsteps.
Yeah, I probably won’t get my daughter into it like my mom got me into it.

Do you think you got into it too early?
Um, no. I think that if I had a more stable upbringing, and I wasn’t running around trying to be a rapper, then I would be a different kid. All that shit made me who I am today. But I probably would have preferred a stable crib, going to one school, hooping, and being that kid. 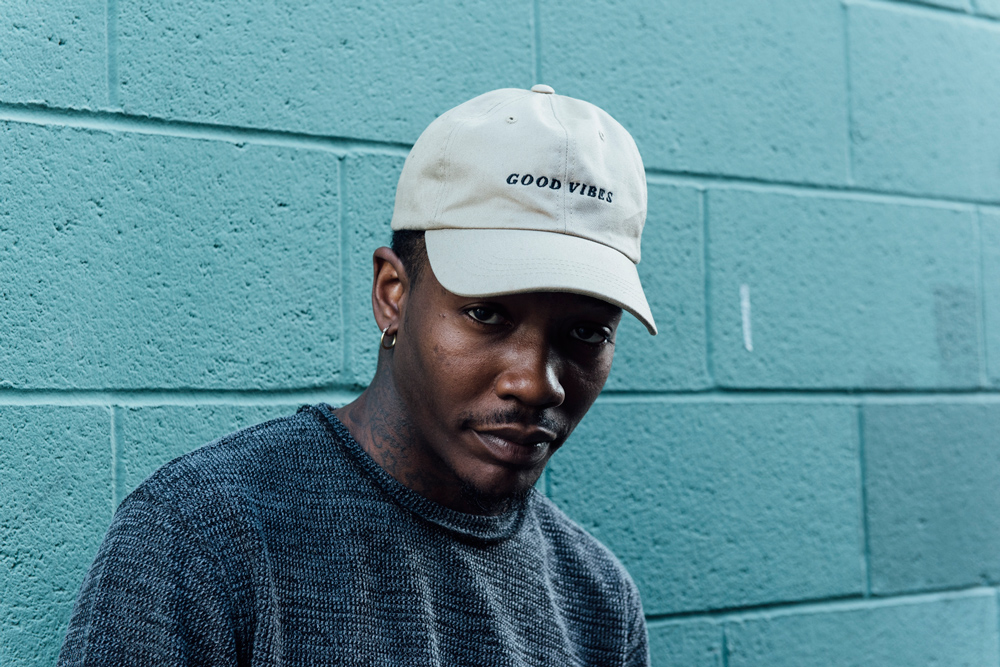 You moved around a lot as a kid. What was it about Las Vegas that made you want to eventually call it home?
It was probably my friends I had in the city. They just thought different here than anywhere else. I felt a little more at home here. Everywhere else was a lot more ghetto. Even though Vegas wasn’t the best place in the world, everywhere else was a little rugged mentality to survive. I just wanted to hoop and be cool and not have to worry about shit like that. I felt like I could be a better me in Vegas than anywhere else. I feel like I would have had to be way more aggressive and rowdy somewhere else. In Vegas I could just play basketball and be the basketball kid.

Does Vegas inspire your music?
In some ways, absolutely. The Vegas living... It just depends on how old you are. It could be the gambling, the party city, it could be the pimps and hoes city. And if you’re younger than that, you can’t drink or those things. So you’re kinda just looking for something to do. And yeah, it just is what it is.

Do you still keep in touch with them?
I do, I do.

I also read that you don’t really “fan out” over anything, not even Bone Thugs, your biggest influence. Can you expand on that a little more?
...It’s probably because I’m an artist, and I make so much music that doesn’t get released. I’m really a fan of myself. I wanna be the best rapper [laughs]. I wanna have the best topics, I wanna touch people’s hearts in the best way, wanna make people dance… I wanna make people feel the best with my music. But I think there’re a million rappers that are dope.

What are you listening to right now?
Right now I’m listening to a mixture of just a bunch of shit because the little Apple Music thing—I’m just now learning how to use it. So yeah, a lot of different stuff. A lot of old music, old hip-hop.

I know you’re into fashion from the stuff you’ve done with Flashy Inc. Where do you get your fashion inspiration from?
I don’t know, I be changing my swag all the time. It’s crazy, because I be doing what I feel. I really just like to switch it up and do different things sometimes. I’m really kinda free-minded. In high school, I was real big into shoes. I didn’t really care about what kind of shirt I had on. I’d wear plain shirts, jeans, and some dope shoes, and that was the style for the longest. Then I started wearing moccasins and I sold all my shoes. And I was wearing fucking cool little small t-shirts with moccasins. Then I started wearing Vans and I kinda haven’t taken the Vans off since. And I just kinda like, you know, I’m being free-minded. Kinda doing whatever. You know, whatever feels right or looks cool. I’m in a position right now to wear all these different things. And I don’t mind having an open mind for some of the things. You know, I have access to a lot of things, it’s easy to be stuck in your ways. It’s easy to be like, “I would never wear that,” “I would never fuck with that” because you’re limited already.... You have to keep it simple and cool and be free-minded. 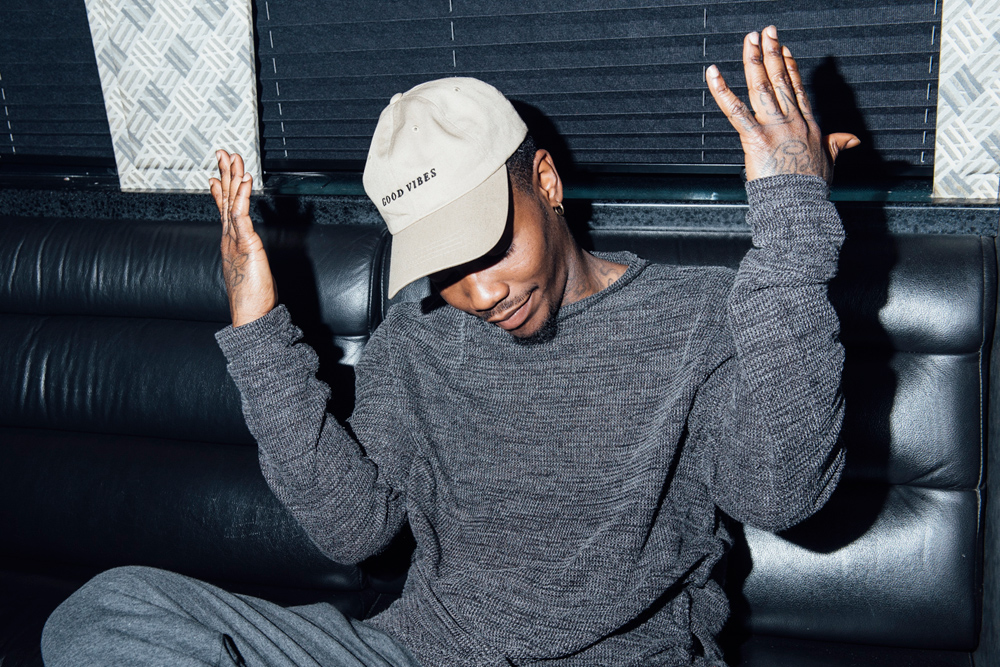 I read that Def Jam tried to sign you and you weren’t feeling their vision for it. What direction were they trying to push you towards that you didn’t connect with?
It wasn’t that I didn’t like that direction, it was that the direction wasn’t for me. They were looking for a little Kid Cudi. That was when Kid Cudi first came out and he was really popping off. And he had that real unique sound. And they were looking for another Kid Cudi and that just wasn’t what I had going on. I love Kid Cudi, it just wasn’t my style. I wasn’t going to try to duplicate what somebody had already done. So I decided to go my own way.

What do you like to do for fun when you aren’t making music?
I’m really a family man. I like to hang out with my family and my kid and chill with them. I like to play basketball. I like to bowl. I like throw darts—that’s a new hobby. Play 2K with my boys. And tour. Tour the world.

You love touring?
Yeah, yeah I love touring. Especially when it consistently gets bigger and better. Oh, yeah. I love it.

Keep up with Dizzy on Twitter @dizzywright & purchase his album at wisdomandgoodvibes.com. Anna Dorn
The 28-year-old rapper speaks on his come up from the projects of New Orleans to creating this season's breakout hit off Quality Control Music, "Moolah." Senay Kenfe
Misunderstood by the major label that signed him and misrepresented by music media, Mr. Muthafuckin' eXquire did the only thing he knew best: He consistently stayed true to himself.
HIDE COMMENTS