Marijuana culture is as accepted a practice as it’s ever been in recent memory – with numerous industries thriving, besides just the cultivation and sale of the plant. In fact, the industry is growing so fast that the Washington Post has predicted that legal cannabis revenue could exceed $35 billion USD by 2020 – making it a bigger business as forecasted than the NFL, newspaper publishing industry, and the confectionary industry. Since the practice of smoking, vaping, or whatever method of procuring THC has become so accepted, the unofficial holiday for marijuana – 4/20 – seems less like a day to celebrate the culture and more just like another day of the week. Yet, no matter your age, upbringing, or financial situation, chances are you get a “Happy 4/20” remark tossed your way like a kicked hacky sack on a college campus quad. While there are numerous rumors as to how April 20 became synonymous with smoking weed, the urban legends themselves are often passed off as “true fact” when the truth lay in the antics of a couple of teenagers from San Rafael, CA.

You can’t mention 4/20 and not recognize the whacked out theories behind the smoke-filled day. There aren’t 420 chemical compounds in marijuana, as what is often thought to be the reason why 4/20 exists. In fact, according to the L.A. Weekly, there are actually 315 known elements that make up a marijuana “high.”

April 20th does mark the birthday of Adolf Hitler, but the date also lives on in infamy because it’s the same day as the Columbine High School massacre in 1999. It’s purely coincidental. 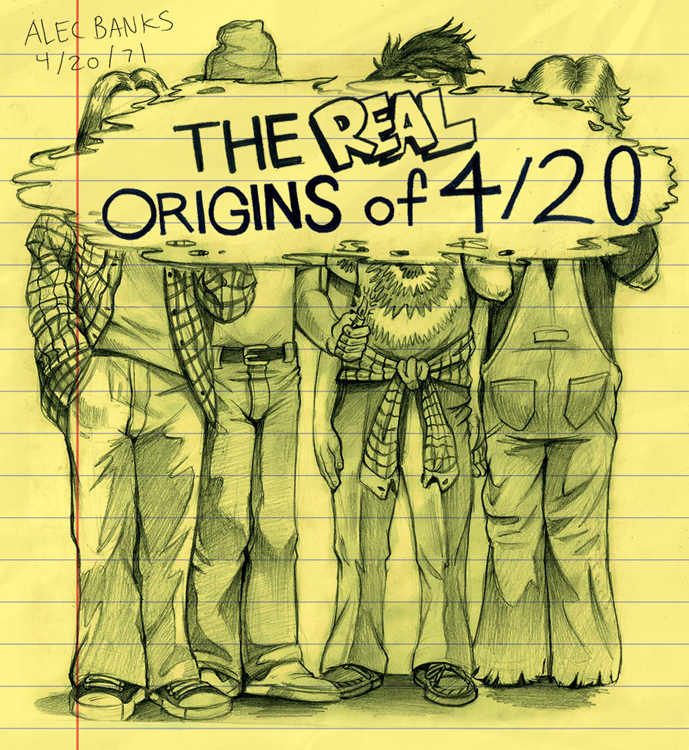 Another favorite “theory” is that “420” was/is the actual police code for a marijuana-related offense. There isn’t a single police code in the United States where 420 deals with issues with marijuana. In Los Angeles, “420” isn’t even an active police code. Any notion that it’s the California penal code for marijuana is also false.

Like any good “pot,” story, it begins with a group of teenagers, not a bunch of conspiracy theorists looking to connect dots when really, marijuana is more about celebrating the crumbs.

The year was 1971. Apollo 14 had landed on the moon. The Sylmar earthquake had ripped through the San Fernando Valley in California. And in a San Rafael high school in Northern California, a group of friends who called themselves “The Waldos” were just about to meet after school. Earning the nickname “The Waldos” because of their wallflower-esque demeanors, the fall of that school year presented the unlikely heroes with a treasure hunt of sorts.

For further listening, there’s an interview with 2 of the original Waldos on the Criminal podcast.

According to the BBC, The Waldos came in possession of a hand-drawn map that supposedly led to a marijuana crop at Point Reyes, north-west of San Francisco, where a Coast Guard service member could no longer tend to his plot of marijuana plants near the Peninsula Coast Guard station. Every day after school, the group would meet at 4:20 p.m. underneath a statue of Louis Pasteur – the French chemist and microbiologist renowned for his discoveries of the principles of vaccination, microbial fermentation and pasteurization – before heading out on their hunt for the Xanadu of weed. In its infancy of usage, the group actually referred to that time of day and their quest as “420-Louis.” The hunt would eventually expand beyond just The Waldos and include a number of devoted Grateful Dead fans, or “Deadheads” as they’d be called in popular culture. Ultimately, there was no treasure to be found, but the introduction of a prominent rock band into the equation brought 4:20 p.m. to mean just 420.

According to the Huffington Post, “It was Christmas week in Oakland, 1990. Steven Bloom was wandering through The Lot – that timeless gathering of hippies that springs up in the parking lot before every Grateful Dead concert – when a Deadhead handed him a yellow flyer.” At the time, Bloom was an editor for High Times – the publication that was to weed like Sports Illustrated was to Michael Jordan’s exploits. The flyer Bloom received read, “We are going to meet at 4:20 on 4/20 for 420-ing in Marin County at the Bolinas Ridge sunset spot on Mt. Tamalpa.” Whether it was a lightbulb moment for Bloom or more like a ping from an Easy-Bake Oven, the notion of “420-ing” was something he had never heard of despite being entrenched in weed culture.

“I started incorporating it into everything we were doing,” High Times editor Steve Hager told the Huffington Post. “I started doing all these big events – the World Hemp Expo Extravaganza and the Cannabis Cup – and we built everything around 420. The publicity that High Times gave it is what made it an international thing. Until then, it was relatively confined to the Grateful Dead subculture. But we blew it out into an international phenomenon.”

Despite other claims of ownership, The Waldos have proof of their usage while others merely have smoker’s tales. Happy 4/20... enjoy your pasteurized milk. The Hundreds Staff
We revisit an essay about the legalization of marijuana from our non-weed-smoking co-founder Bobby Hundreds. Alina Nguyen
"The building is a literal hot box. My eyeballs feel like they're made of velvet." What happens when a rapper has a collaborative weed release in LA and it's supposed to be totally legal? Welcome t... Behind The Shirt :: The "Crazin'" Graphic w/ Artist Josh Clements

Kazie Holiday
The Hundreds' illustrator, Josh Clements, takes us through the process of making Spring 2015's custom "Crazin'" pattern in this edition of "Behind the Shirt."
HIDE COMMENTS