For those not from California, the Pacific Northwest, or another part of the country where the city governments “get it” in the realm of skatepark design, the offerings can be beyond lackluster. The only thing you can count on once the news breaks in your hometown or community that there’s a skatepark being constructed is that you’re going to be disappointed. Still, it’s better than nothing (hopefully!) and these subpar facilities are used, abused, and sometimes left to decay or be turned back into tennis courts or parking lots eventually – whatever it is they were in a former life. But the kids, they grow up and they cut their teeth so to speak in these spaces – building friendships, making memories, and learning how to skate. Sometimes there’s no big city nearby to catch rides to. Sometimes there’s no proper indoor park to help you out in the cold midwestern winters. These parks become the epicenter of their day, their social scenes and beyond.

For Todd Bratrud’s upcoming The Hundreds by Todd Bratrud release, we visited both his current home’s scrappy local park situated across from the cop shop in Grand Forks, ND, and the Familia Skateshop HQ park in Minneapolis. 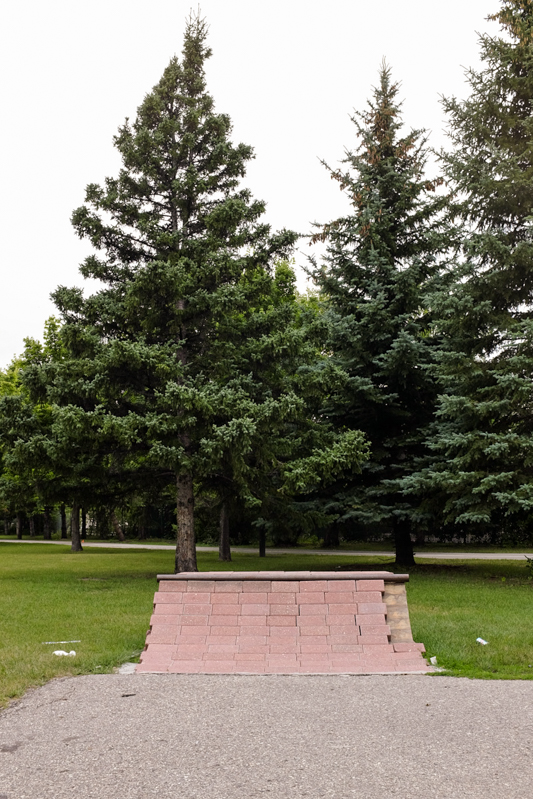 Ponyboy (left), Iggy (center), and Barbershop (right). “5-0” skatepark locals. Back in the day we put playing cards in our spokes to make noise. In Grand Forks, cardboard must be the new go-to. 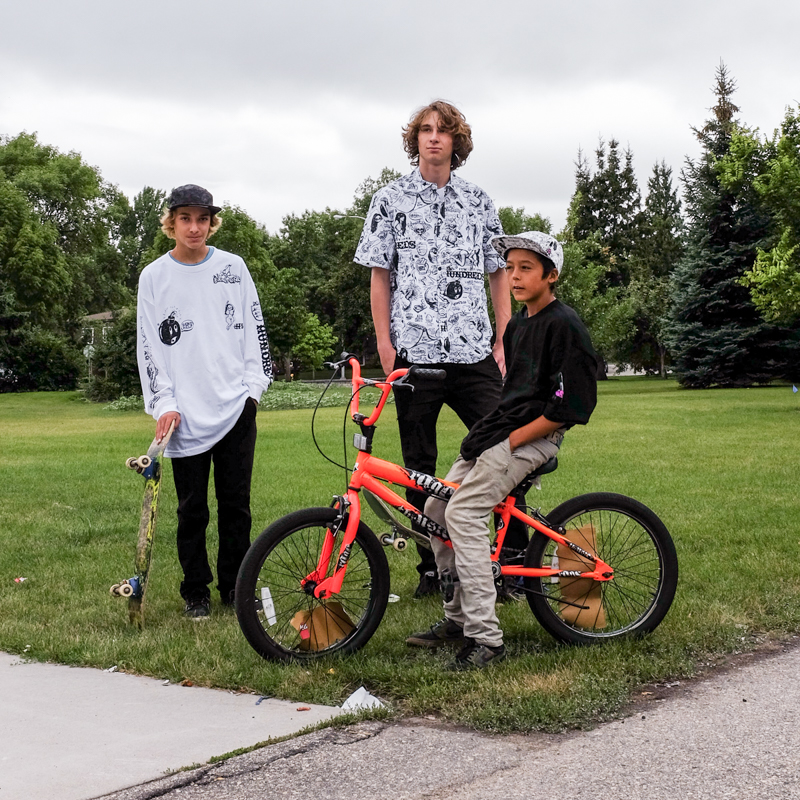 Todd cruises by the park almost daily to kick it with these dudes. They’re part of a handful of guys who are literally always there. Barbershop (below) had a bum ankle and could only really roll around this day. 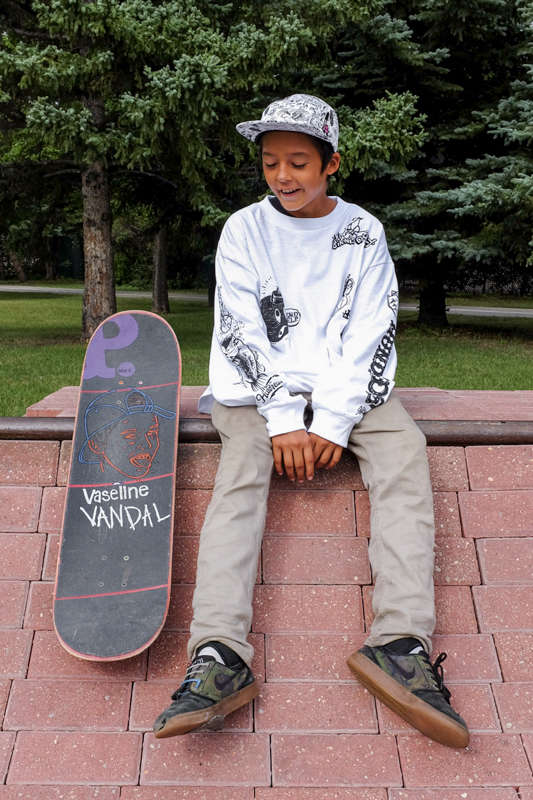 Barbershop repping a hand-me-down board from Todd with custom grip art by recent Minneapolis resident (again) Luke Handsome. He definitely has the most stories to tell, and the most stories told about him. Seems like he’s always hamming it up and was a natural in front of the camera. 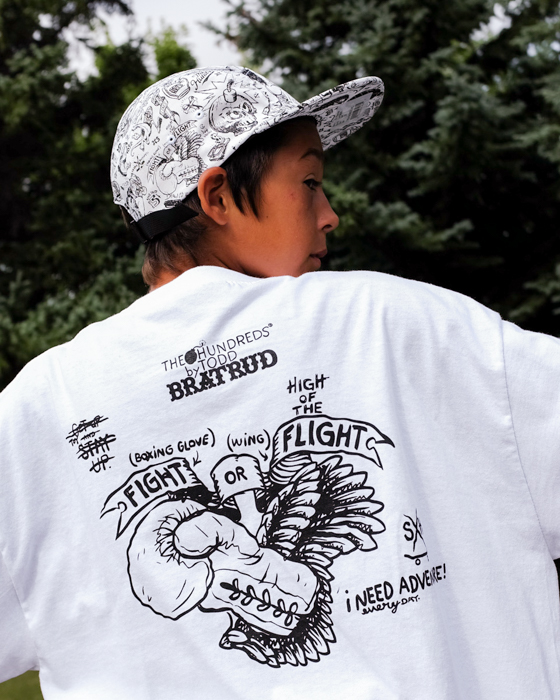 Iggy helped us wrangle up the guys for the morning shoot and we ended up making it happen all through Instagram. They were all Johnny-on-the-spot. Ponyboy (center) is the most reserved of the three by a longshot. When you look at him though, it definitely seems like he’s got quite a bit to say. 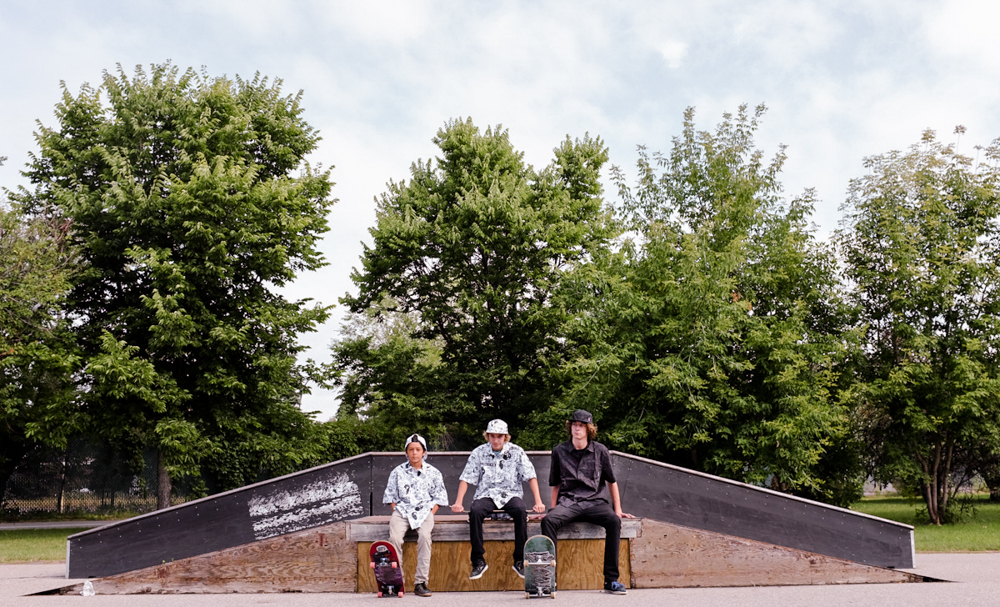 Not unlike similar public parks across the country, the conditions of the ground, ramps, all of it, were in various states of disrepair. It seems as though the locals just use what is around and available to patch and fix things as needed. This summer, the parking lot adjacent to the park was repaved and became busier than the park itself. The cops across the street were not so stoked seeing as how they park some of their cars there. 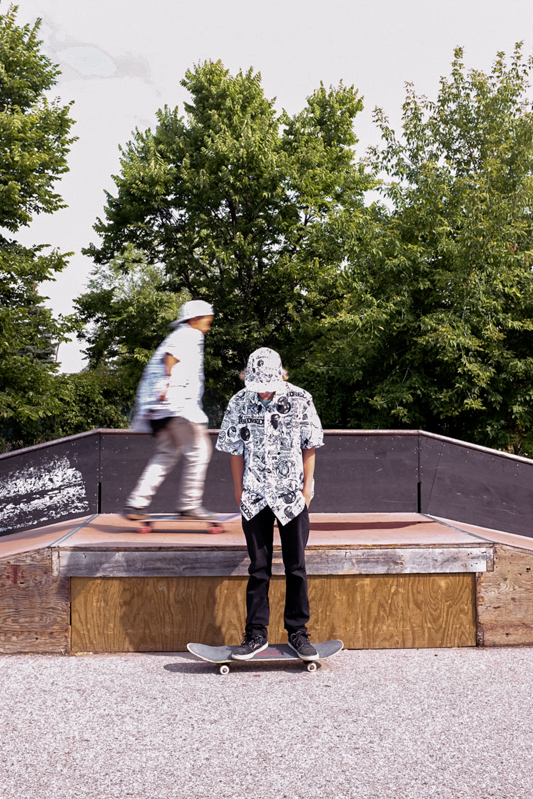 Apparently one of the locals fancies himself a graf artist. 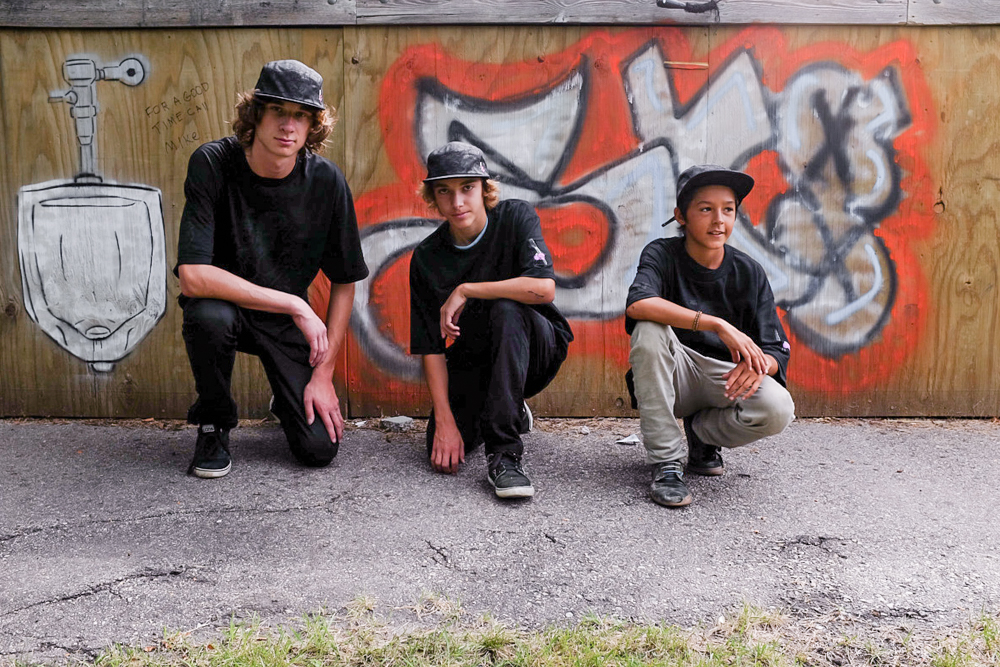 This tree is like a living sculpture. The dudes attach old decks so far up the tree I actually am unsure how they get em’ up there. Especially with the cops watching across the street. 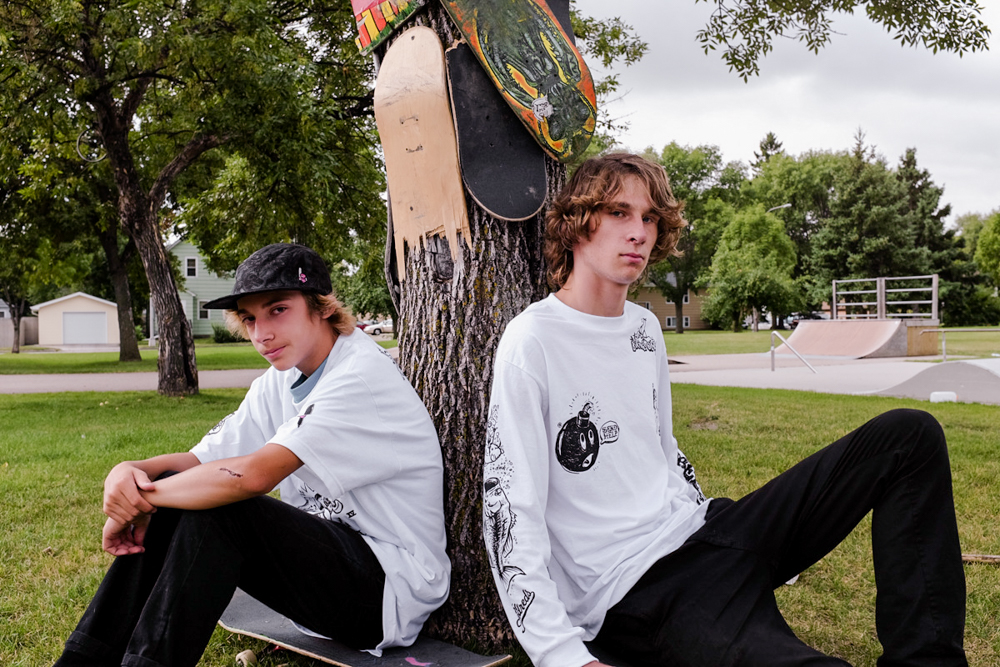 Todd’s sticker stash is ridiculous. And I’ve never even seen some of these High Five stickers before. The young guns were happy to help put em up. 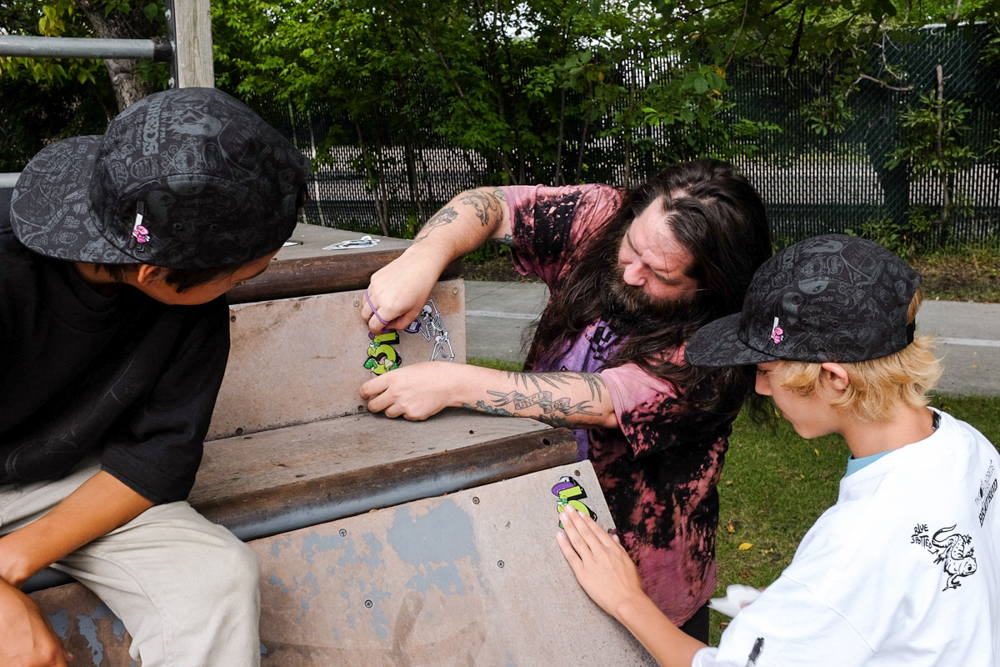 This is a nod to the old water tower in town which had the same face on it. 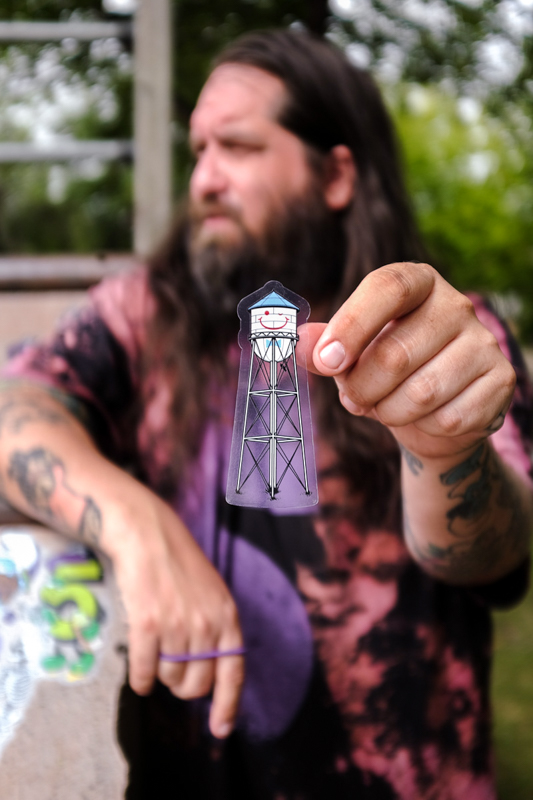 Besides the insides of this collection, there’s illustrations covering nearly all angles of the gear. Todd kept it simple but plentiful. 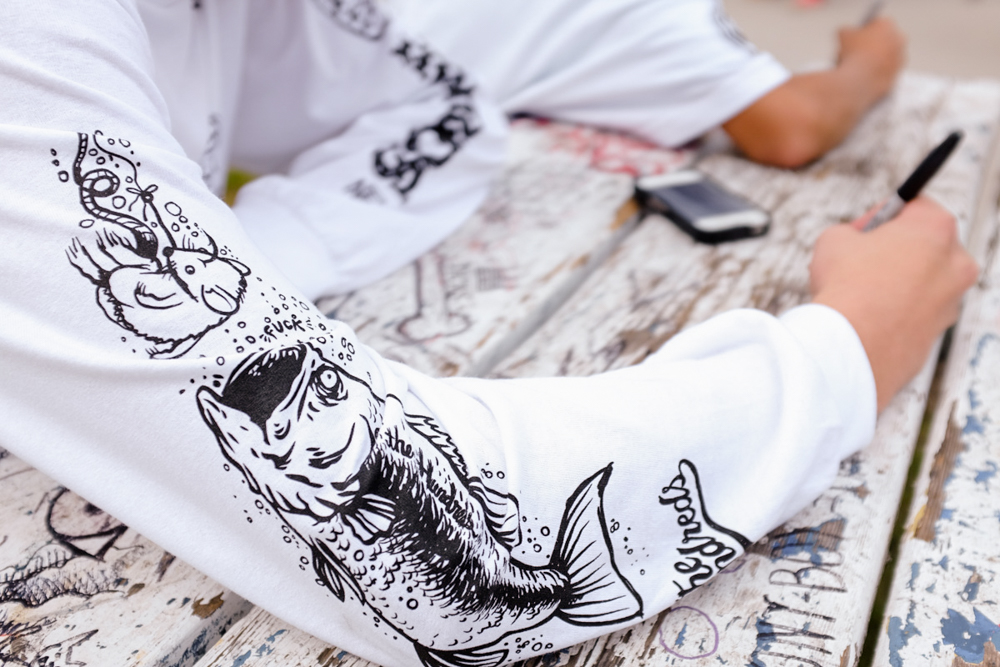 All 3 of the guys were happy to “spruce up” the table with the help from some Sharpies from the sketchbook in the collection. 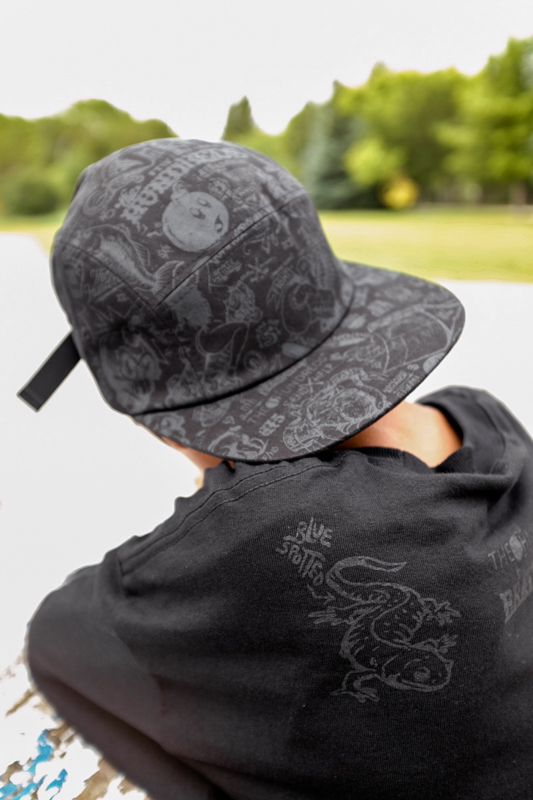 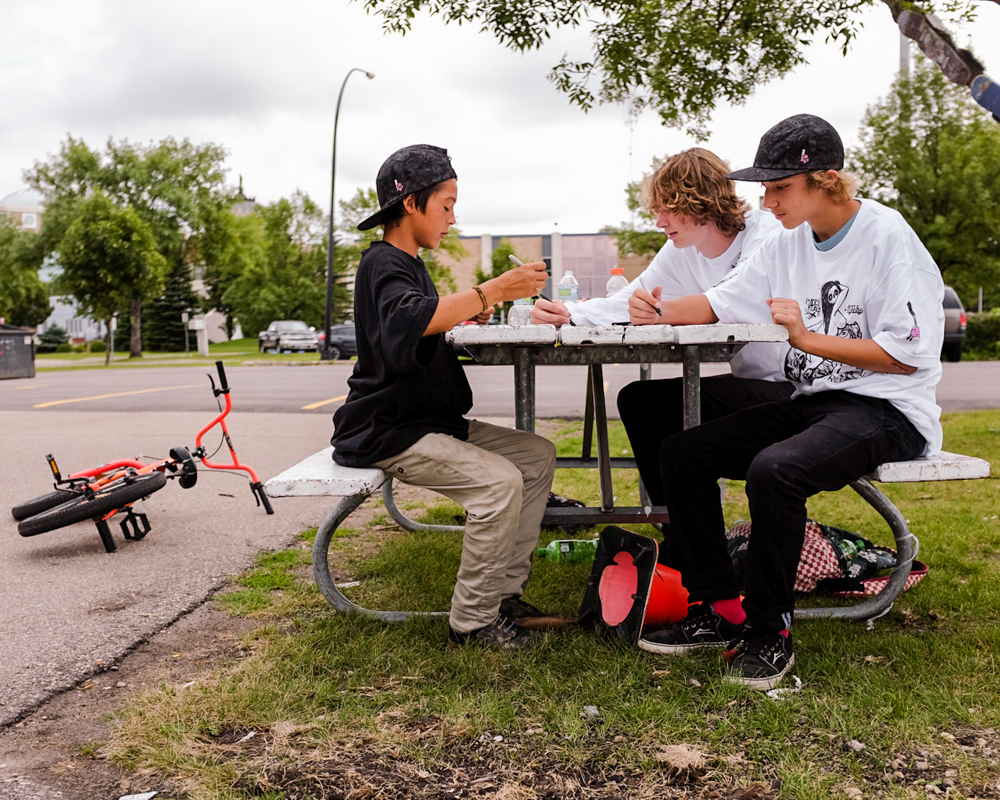 A portion of a wall at Familia HQ Skatepark in NE Minneapolis, MN. 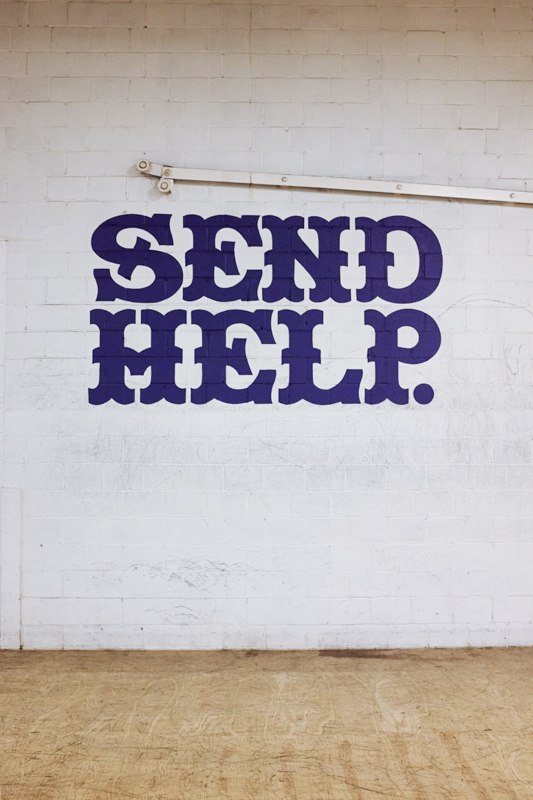 Tabari Cook, Send Help rider. Tabari works the park and spends a great deal of time here (as one would if they had unlimited access) . Recently there was a slight remodel on the still-newer park and it’s even more fun to skate. 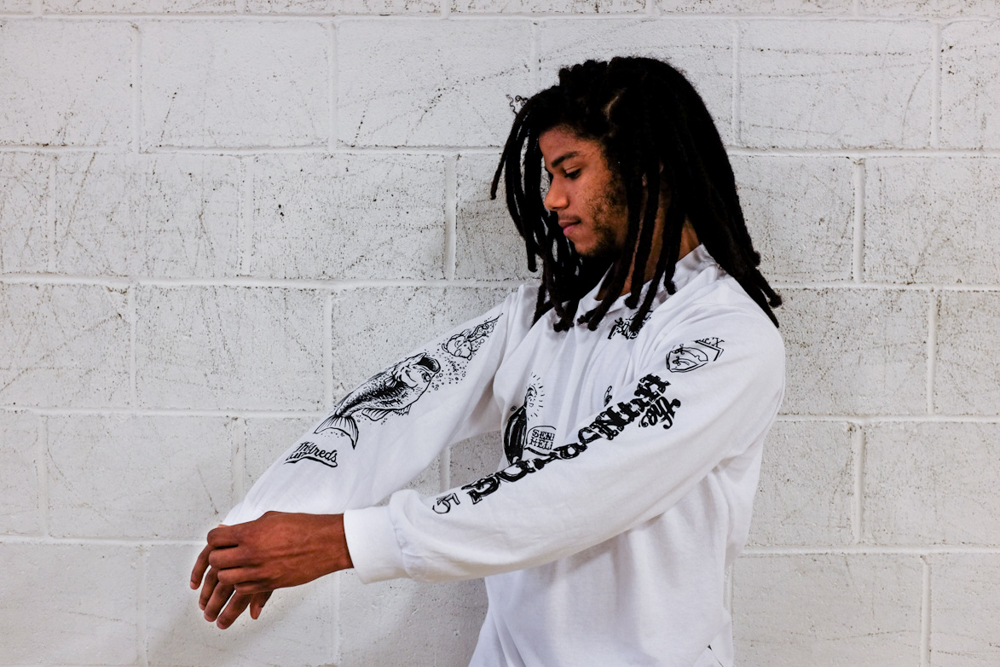 CJ Tamborino, The Hundreds rider. That’s downtown Minneapolis in the background with CJ up in the observation deck at the park. You can see virtually the entire park from this perch and it offers a nice burst of sunlight to the space. 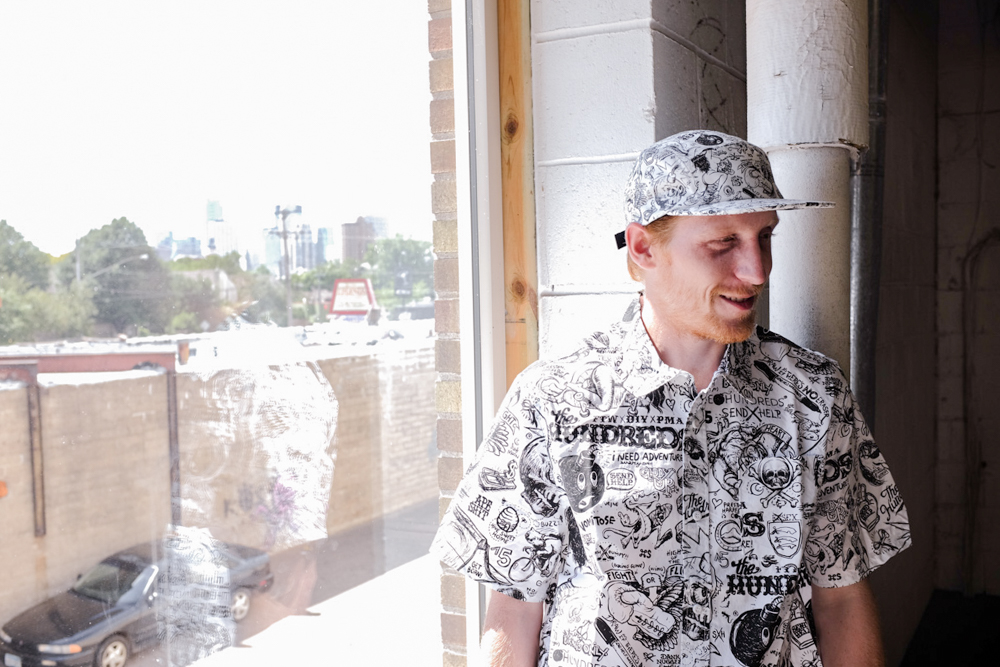 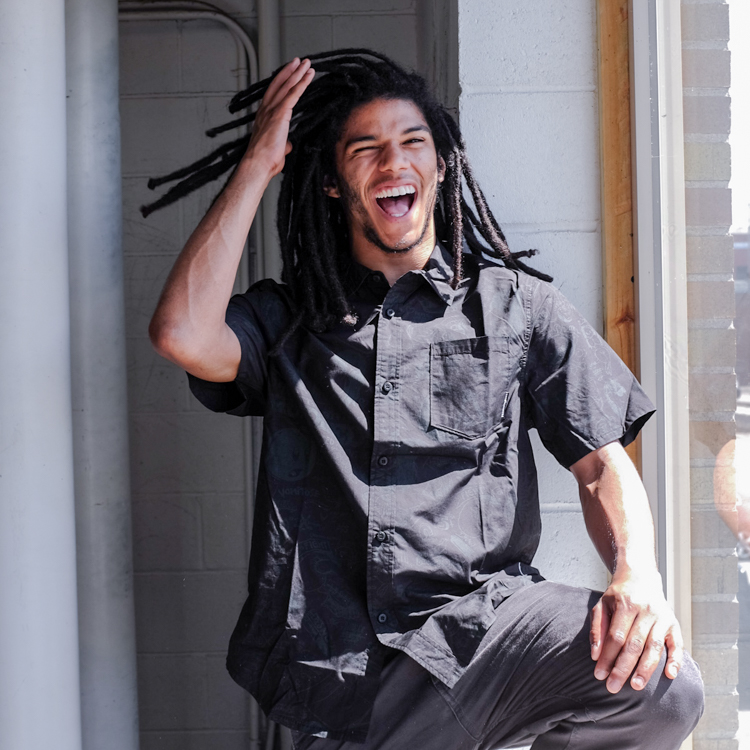 CJ has been healing up from some broken ribs and surgery the past couple months. He’s so antsy to get riding again and just started rolling a bit recently. 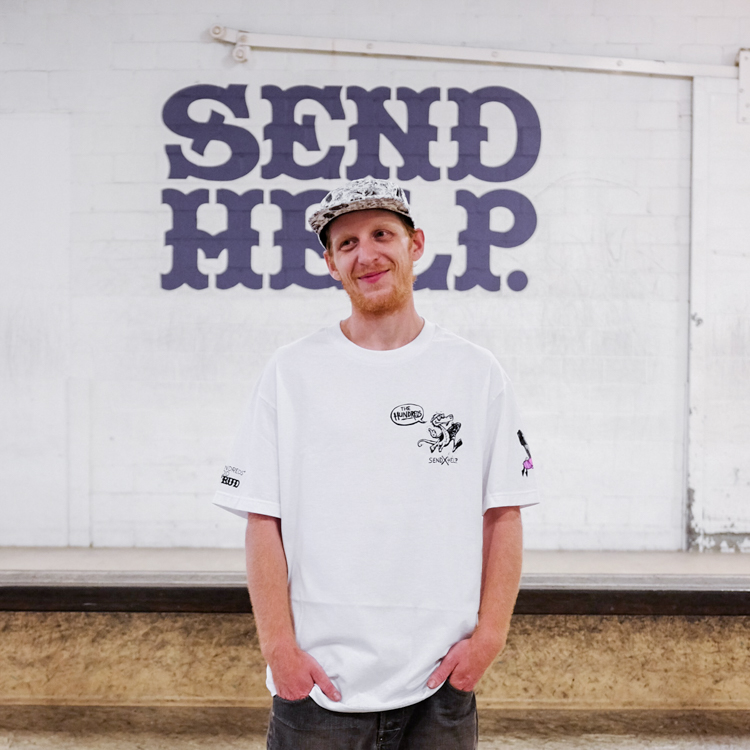 There’s a bank to ledge that ends in a perfect hip behind and to CJ’s right. The whole park is covered in birch and is super bright. 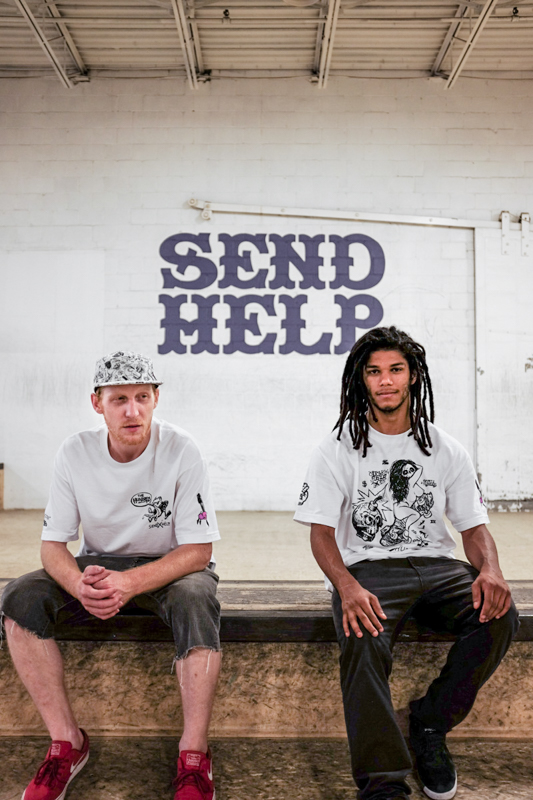 This park in Minneapolis is a far cry from what the local outdoor alternatives typically are. CJ and Tabari stay humble knowing that they’re in a fortunate spot. 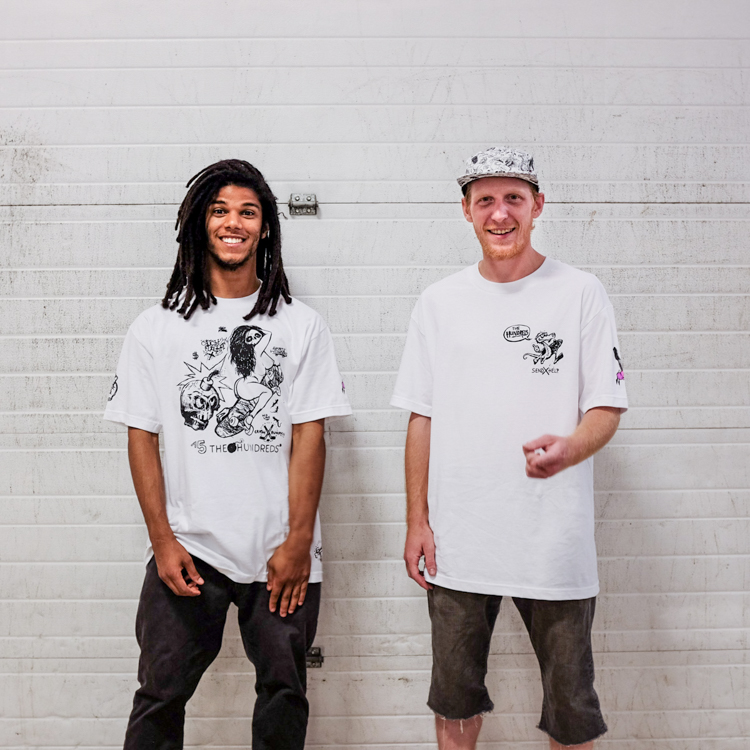 Tucker unravels some of the Midwestern mystique behind Todd Bratrud’s journey as an artist in his recent interview.