Connecting the Dots :: Team Terrible's Founder on Building a Brand

I’ve been fortunate enough to work in the streetwear industry for quite some time now and have been able to make some amazing relationships with the people within. One person in particular—Eugene Hood, founder of Team Terrible)—stands out. In an era where the streetwear scene might be labeled as “over-saturated,” there have been people who have been able to keep the core aesthetic alive, Eugene included. I first met Eugene while working at the Benny Gold flagship store in San Francisco. He, at the time, managed the flagship HUF store in SF. One thing I noticed instantly was how down to earth and humble he was. Being in the business for a number of years, I’ve been able to meet a lot of the guys behind the scene, a lot of whom have been let downs; the notorious “cool guy.” Eugene, on the other hand, was a different case. He’s been able to use his humbleness and humility to get him to where he’s at now. I sat down with him to pick his brain about streetwear, then and now, as well as learn about his clothing line that he now runs full-time, Team Terrible. 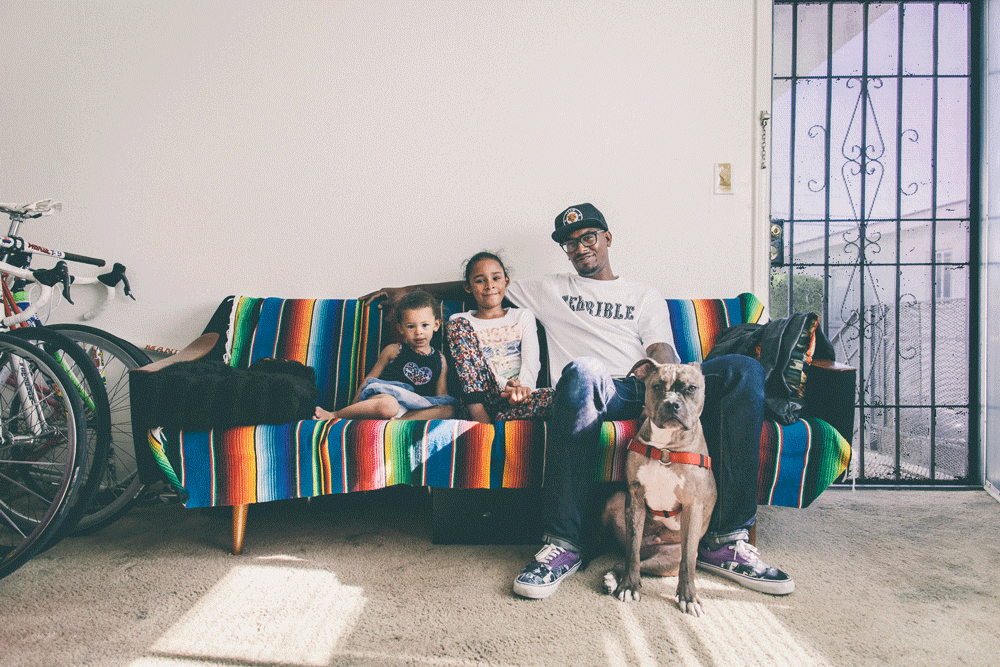 BRIAN SIN: You have a streetwear brand in the year 2015; how would you say streetwear has changed over the years since you first got into it 10+ years ago?
EUGENE HOOD: Around 10 years ago, it was different for streetwear. As far as the streetwear scene goes, I feel like nowadays there’s so many people out there doing their own brands. Back in 2003-2004, it was a lot smaller. If someone had a brand, it was like, “Oh shit! You got a brand!” Now everyone and their grandmother has a brand. So it’s kinda hard to stick out, but if you do cool shit then you can definitely stick out.

To go back to what you were saying about the streetwear scene back then, it was a lot smaller and the only way you could get into it was by connections from the people that you knew. How did you get your foot in the door, especially back then when it was such a tight-knit scene?
I got hooked up by my friends Ed and Massan. Those were dudes I knew from skating and cycling that worked there at the time. I started working there eventually and was just excited to work for Keith [Hufnagel] since I was skating a lot at the time and he was one of the dudes that I looked up to. 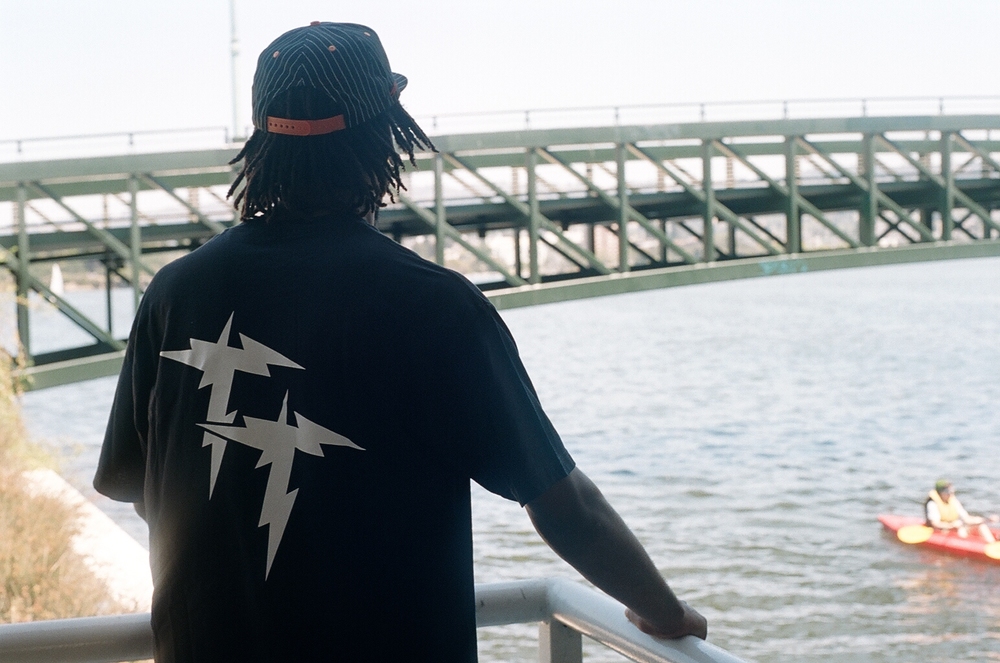 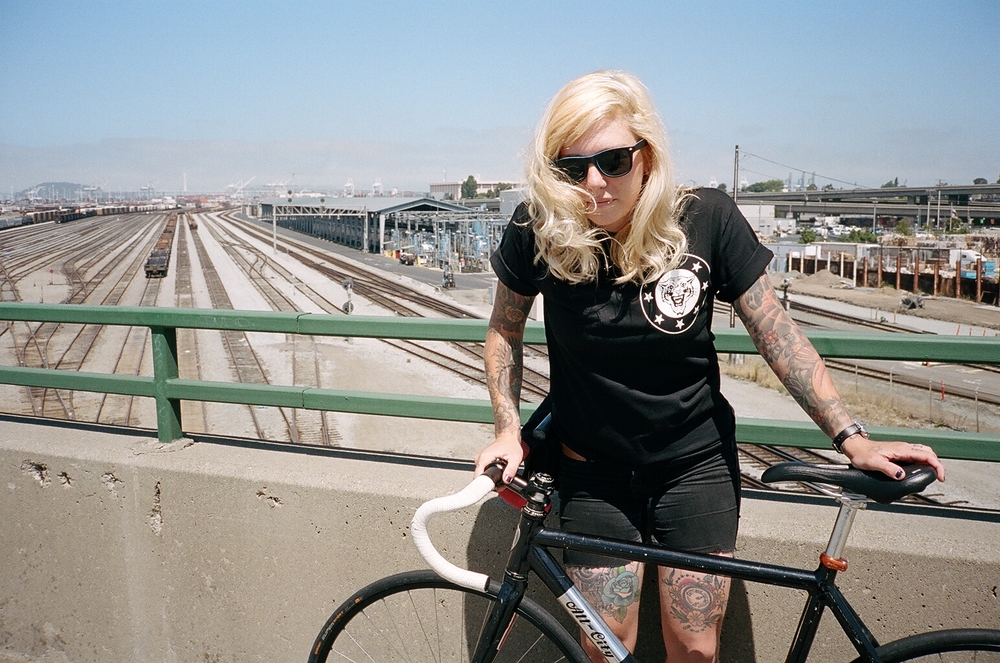 That was also back in the times where if you had a job at a place like HUF, you were almost labeled as a “cool guy.” You had the job that every sneaker head wanted. How was the experience working at HUF?
It was more of a status symbol [laughs]. It was so crazy. We would all go out at night wearing HUF gear head-to-toe. We had a thing called “hufset” that was inspired from “dipset” and we would all be throwing up the ‘H’ while chanting “HUFSET” [laughs].

Do you have any good stories from the “Hufset” days?
I would say the one time we took a company trip to Tahoe. There was 30 something of us there. I’m not going to get into detail as to what went down [laughs]. But basically it was like a modern day “real world.” Partying, fights, alcohol, beefs that were going on between some of the employees…

I feel like back in those HUF days you guys really created somewhat of a brotherhood with each other.
Yeah, we were all very close—even the new guys that would come on board would be from people that were already working there, so everyone already sort of knew each other. It was one tight-knit family.

Working closely with guys like Keith Hufnagel and Benny Gold, what were some things you took from them?
Just staying motivated man—you see how HUF is doing now. They’re opening stores left and right; it’s awesome. With Benny too, I’ve known him since he moved out to San Francisco from Florida and just seeing him grow as a designer [to] now being a successful business man. I definitely respect what they’re both doing. 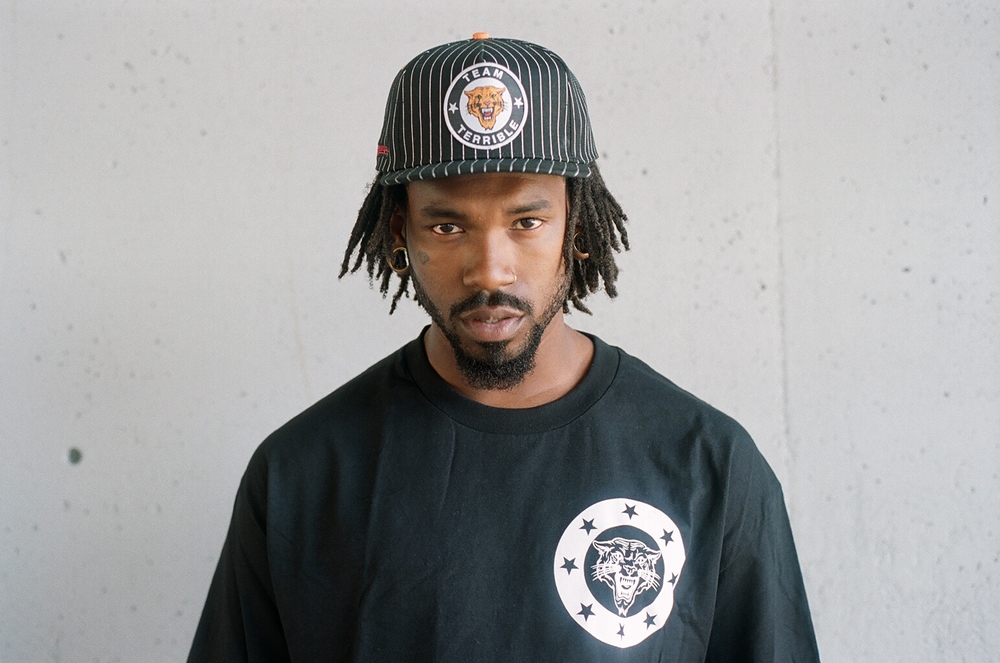 When I first moved out to San Francisco, I remember I came across some images on the Internet of you and your boys rocking these Team Terrible varsity jackets and thinking how cool they looked. How did that all start?
It all started from many nights of partying and getting super drunk, getting kicked out of bars, and acting a fool [laughs]. I was like, “Hey, I’m gonna make a couple jackets for my close friends.” We’d wear them out, sometimes all together, and it started to create a super good buzz. At that same time, I always wanted to start my own clothing line.

What was the moment where you realized you can do this full-time and go full force with it?
It all started from the jackets. I was getting hit up by a couple people to make some tees to go along with the jackets. I did 4-5 shirts for the first run and they did really well; [it] started to create a buzz and sold out immediately. I started selling them through different outlets—a lot of them ended up in Japan—and then I got hit up from places like Indonesia and different countries for Team Terrible.

I think with you, you were fortunate enough to get a head start on things. You were able to set up distribution in different countries in the beginning, whereas for most companies starting out, distribution comes later. How were you able to make that happen in the beginning?
It’s all from connections I made from cycling. I was affiliated with the fixed gear video Mash. It was definitely one of the first fixed gear videos of its kind which came out in 2004. We would travel to these countries and would make connections in the cities we would visit for the video premieres. 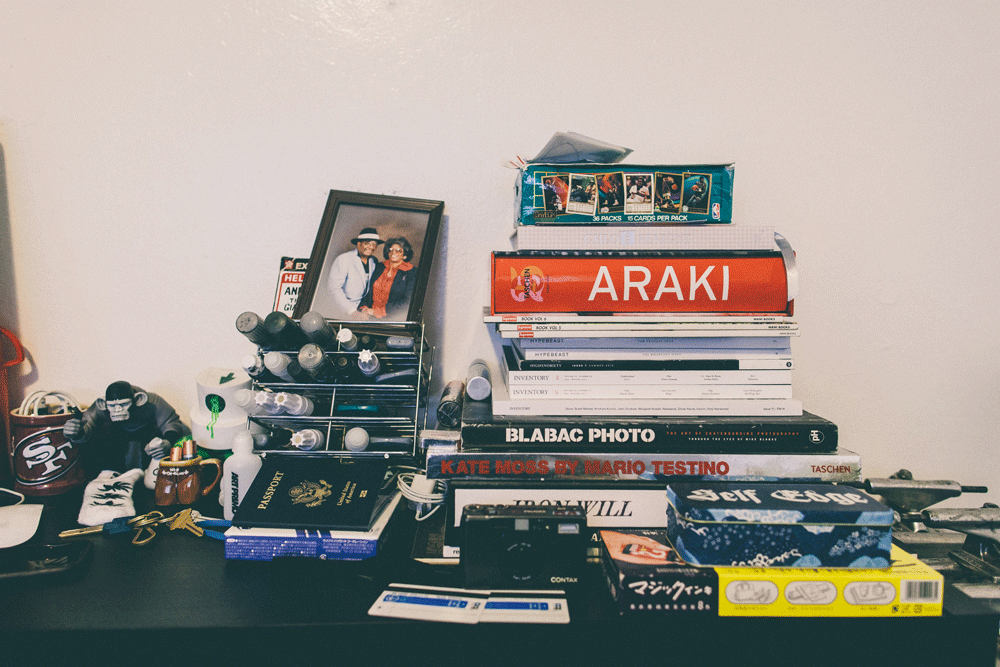 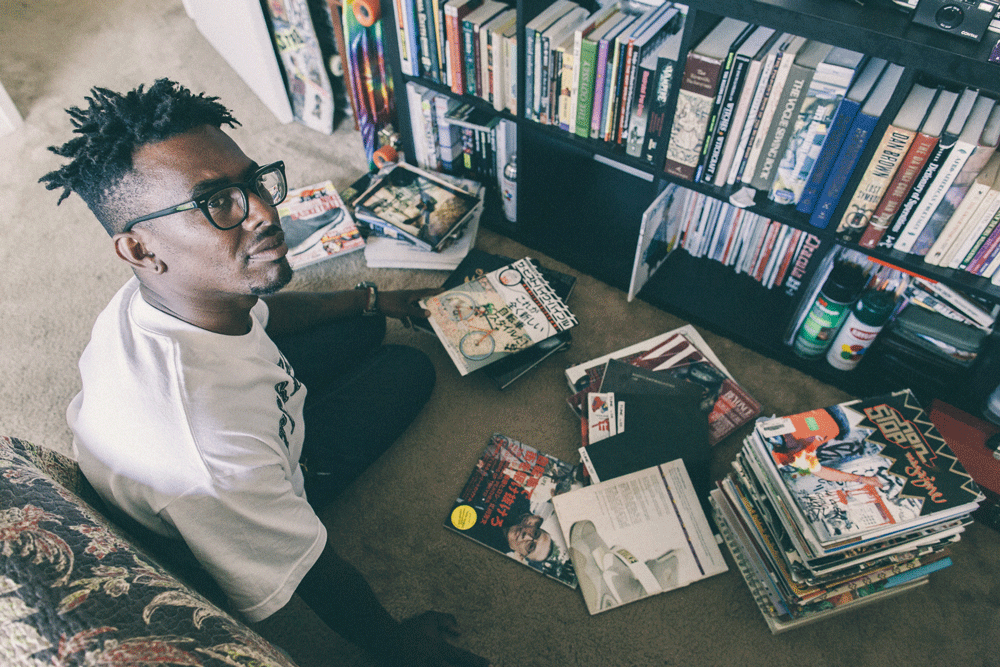 “JUST KEEP DOING YOUR THING AND EVENTUALLY THE CONNECTIONS WILL COME TO YOU.”

What type of creative voids are you able to fill with Team Terrible?
With my designs, I definitely try to do more over-the-top stuff but keep it simple enough [so that] the customer can still wear it. My brand is pretty much an image of me and how I like to look at things. A lot of the stuff I put out is sports inspired just because growing up, I was really into collecting baseball cards and comic books.

The first thing I noticed about Team Terrible was all the parody-based graphics. Do you have any help when it comes to design?
I have a partner, Joe, based in Tokyo. He’s more of the computer guy and I’m more of the brains behind the brand. He basically puts all my ideas onto the computer. The brand is all about having fun. I mean, that’s what life is all about.

Has it been tough having a small team behind the brand?
Yes, I’ve had to sell a big chunk of my sneaker collection [laughs]. I don’t have any investors or outside money coming in. It’s good though because it really makes me work harder for it all. 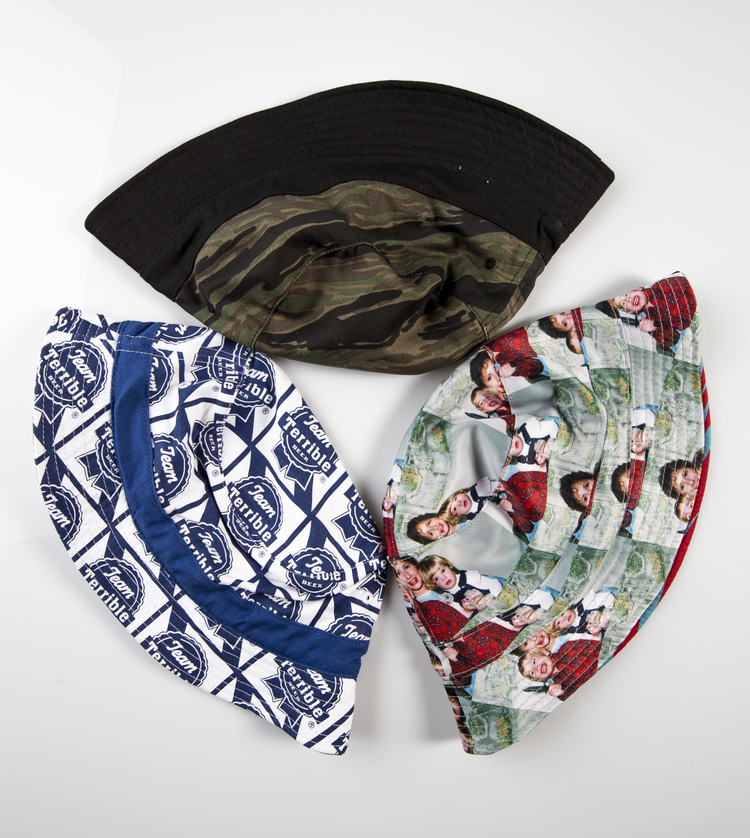 Do you think having a background in the streetwear and fixed gear world has attributed to the success of your brand? How important would you say making the right connections are?
It’s always good having the right people around you. I’ve definitely made some good connections over the last 10 years and definitely stoked on the people that I’ve been able to meet and have a relationship with.

What would be some advice for someone that might not have their foot in the industry, but are trying to start their own clothing line?
Just keep doing your thing and eventually the connections will come to you. These days with all the brands coming out, you really need the connections.

Lastly, you wanna talk about the dreads?
As you can see, I’m growing them back. Definitely had some funny outfits back then. One of my most notorious outfits was the mesh jersey, which I’m sure Benny [Gold] told you about. Everything from the mesh jersey and raver pants. Brian Sin
Brian Sin catches up with Creep Street's founder Boris, to learn more about his pinnacle move from Queens to LA and how he left a corporate job to pursue his uniquely punk and horror-inspired stree... Chona Kasinger
Chona Kasinger heads over to Trichome, a beautiful modern smoke shop out to change the perception of marijuana and the people who use it, incorporating rare glass alongside a curated selection of b...
HIDE COMMENTS