Jon Hundreds and his sneaker column on The Hundreds made me a better sneakerhead. Seriously. I’m not saying this because I see him wearing heat everyday, or because I’m being paid to say it—his love for the culture and sneakers in general was a reason I frequented The Hundreds Blog years before I started working here.

The photography, the diversity of his selections and the fits (oh, the fits!) he put together with upcoming releases raised my excitement for Saturday morning mall runs. But just as his column disappeared mysteriously months ago—so did the general excitement for a lot of what we loved about sneaker culture. Now, resellers have a bot army at their command that can snatch any shoe at will. Kids and adults camp out for raffles for guaranteed entry into an exclusive club of sneakerheads who do entirely too much to prove their loyalty. It hasn’t been fun anymore—and it wasn’t fun for Jon, either. 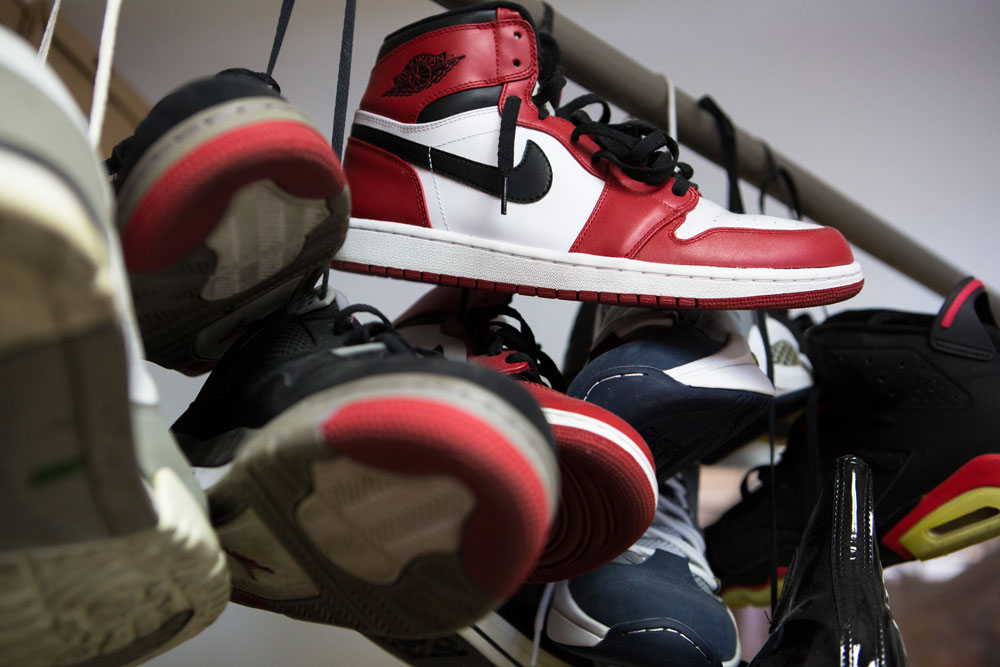 I came across an old archive of his columns a few weeks ago, and it piqued my interest in finding out WHY Jon Hundreds stepped away from sneaker blogging, and kept his opinion in the dark. In a conversation with him, I found out what cause his self imposed exile from the game, and more importantly—I got him to agree to bring it back. So here it is, my conversation with the true sneaker sensei, Jon Hundreds, about his thoughts on the industry, resellers, and everything in between. Expect his no holds barred opinion to return to this very blog in the very near future—complete with the elements that made the first one so special. 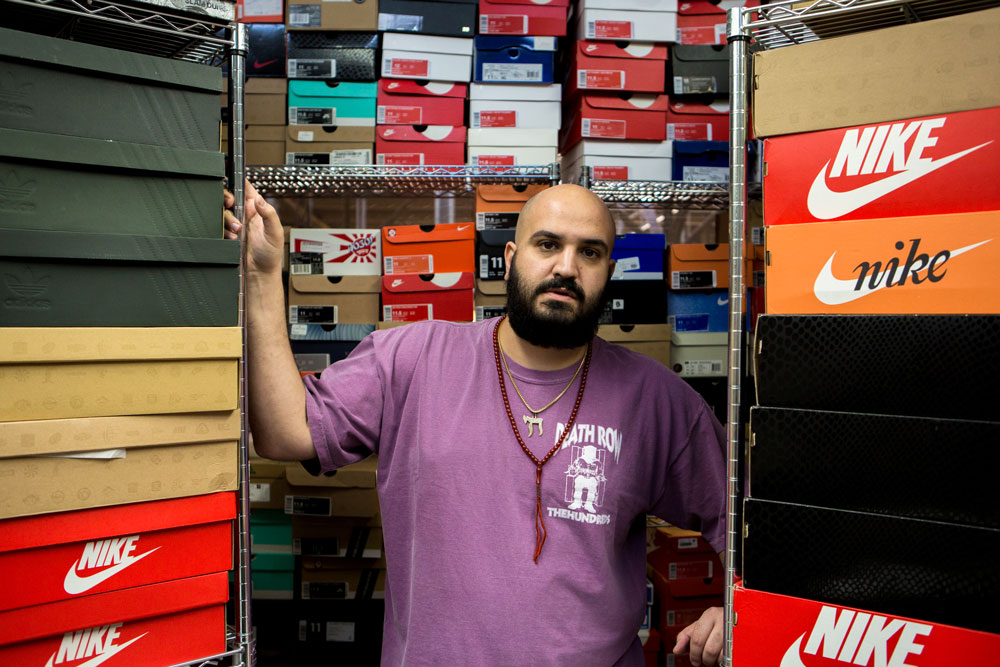 JUSTIN DAVIS: Why did you stop doing your sneaker column for The Hundreds Blog?

JON HUNDREDS: I started getting really bored with sneaker culture in general. A lot of it had to do with the same product coming out over and over [with Nike]. They weren’t doing anything new or exciting at all. A lot of what drove me and attracted me were a lot of the [innovation] that they were involved in. And things started becoming more high-end. Nike went through companies like Acroynym. And most importantly, NikeLab. It was cool in the beginning—then it got hyped. And shoes that people really wanted like the Spiridon or the Talaria dropped through NikeLab. It ruined it. When those shoes retroed in the early 2000s—it was a $100 sneaker. Now all of a sudden they need to feed into the high-end culture that’s going on. Now it’s $200. They made the Nike Prestos a mid-top, now it’s worth $200.

“I don’t want to have to contact my friends who have accounts with Nike for a regular ass shoe.”

It made it not fun anymore. I don’t want to have to contact my friends who have accounts with Nike for a regular ass shoe. I want to contact them for something that I feel is a dope shoe or a dope Air Jordan. And even [Jordan Brand] got watered down. They raised the prices—to kill the resell market, but now resellers aren’t going out and buying them right away. They’ll buy them on sale or go to an outlet. If something like a [Jordan 1] isn’t a hyped colorway, it’ll sit. Like the Metallic Navy, or the “Letterman” colorway. 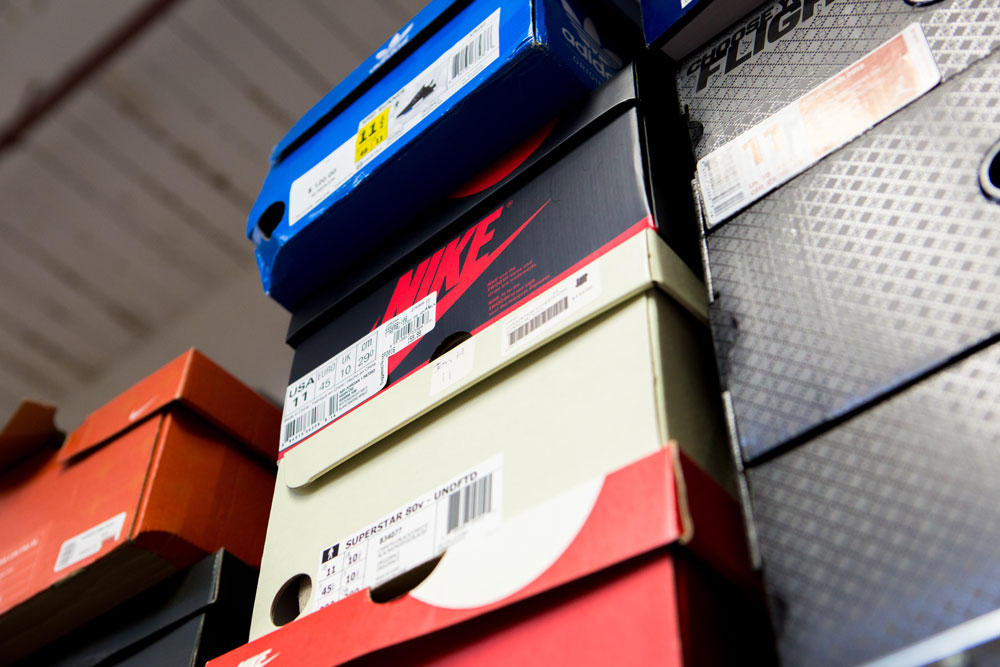 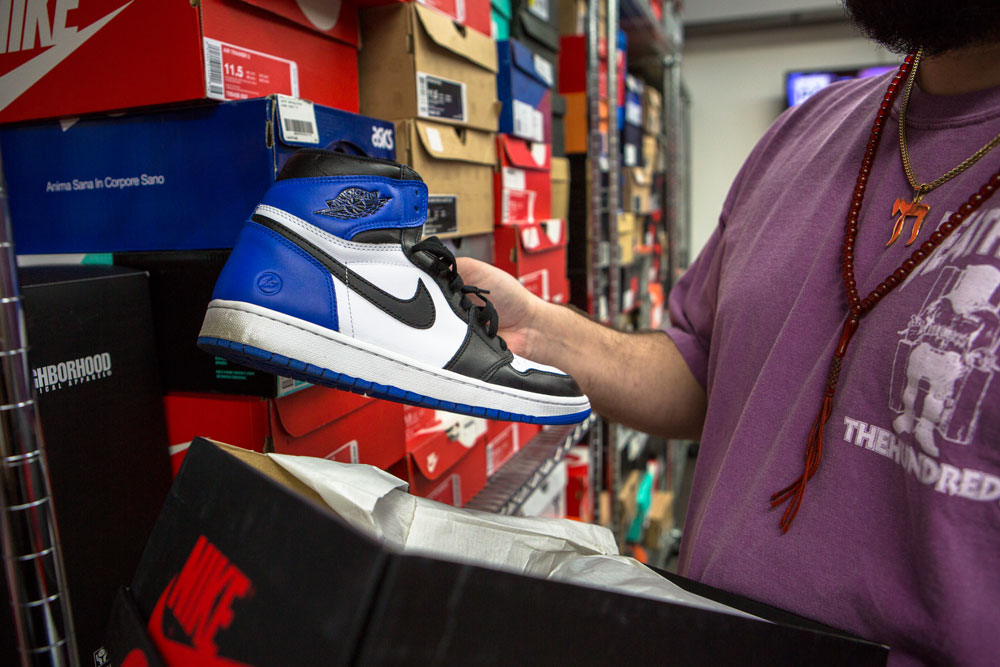 I’ve always been a sneaker lover in general, so I’ve always fucked with adidas, Vans, or Asics. With adidas now, they’re hyped because of the Kanye Effect. Unfortunately it’s real, and for the most part, I think it has ruined the sneaker culture, period. If that shoe didn’t have Yeezy’s logo on it—no one would buy it. It’s a glorified Roshe. And don’t get me wrong, I like the shoe. The only thing that’s hot right now IS adidas. Collaborations [like adidas x Yeezy] are what drives sneaker culture.

By design, collabs are supposed to be harder to get, with exclusive colorways, and are an expression of their personality. Nike should be doing that, too. Adidas is doing it, but then again they’re [falling into the trap] of the resell market. But I can’t hate on them, because the Boost technology that they’re using is next level. It wouldn’t be as hyped if Kanye never wore them—I can’t even get a regular pair normally!

I fell off of the sneaker culture and I went back to classic shoes like the adidas Gazelle, because I was tired of what was going on. I’m also a dad now, and that had a lot to do with it. There’s just not a lot of stuff coming out that excites me. Back in 2013—every week there would be a new release from Kobe, Lebron, or Nike Basketball. Now, you won’t even pick up a Lebron or Kevin Durant sneaker. 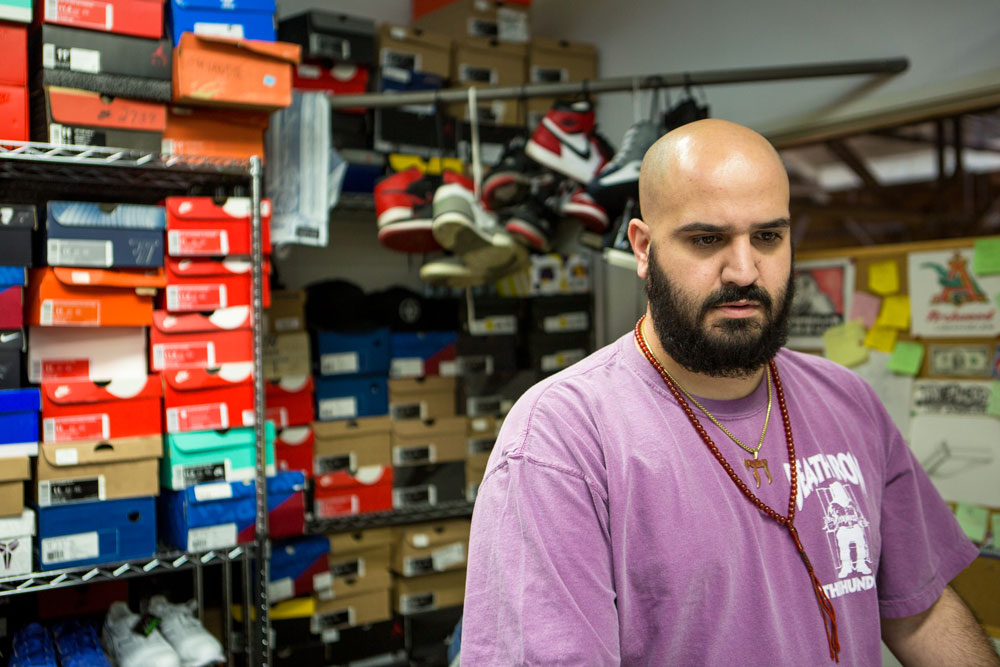 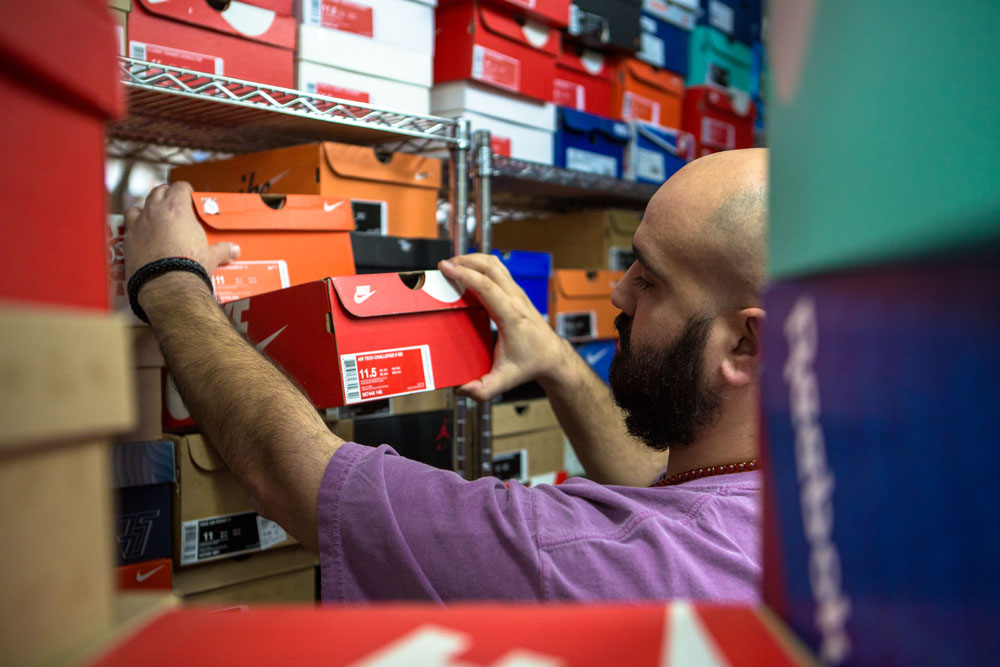 “I fell off of the sneaker culture… because I was tired of what was going on.” 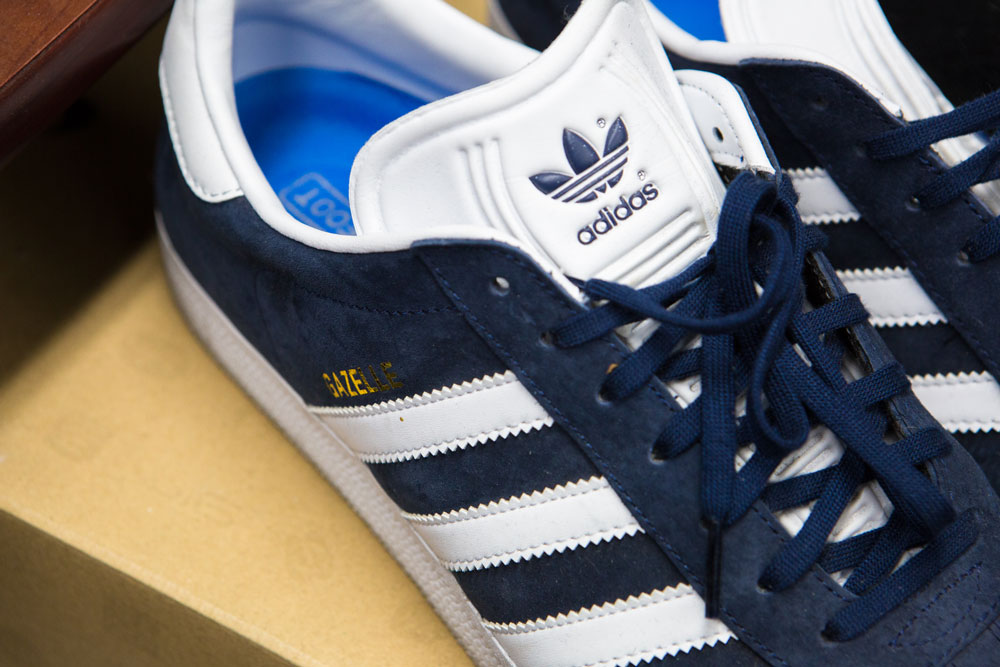 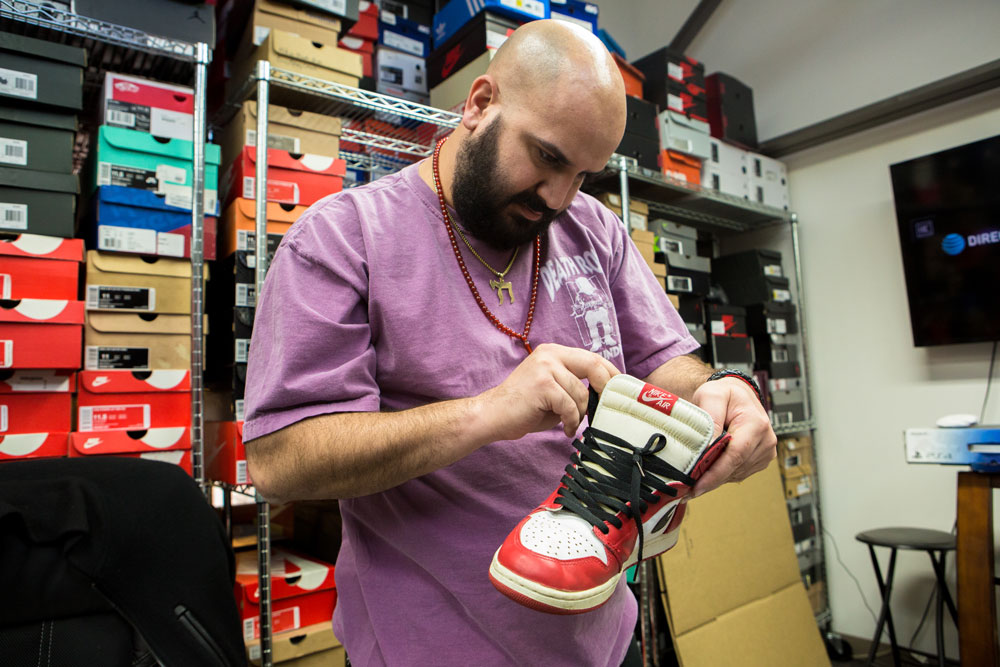 How do you feel about applications like Grailed or StockX?

I think things like [Grailed and StockX] is dope. I’ll always be a fan of good business. For sneakerheads like me it sucks, because even though you have access to the shoe that you want, you have to pay the premium. I have respect for StockX because they know the market. They do the research on how much [these shoes] cost.

Things like Grailed are good for the marketplace because they allow you to negotiate what you want, even if you have to pay the resale for it. But it’s still very much a resellers market. If you’re standing in line for a raffle—it’s 70% resellers and 30% of people that actually want the shoe. It’s going to be like that for a while. There are dudes who are quitting their job and paying their rent off of reselling, and making a decent living.

Why are you bringing back the sneaker column?

I just want to talk about sneakers. I want to bring it back. That’s one of my first loves, and I’ve been doing it for almost 20 years now. I want to bring back the fun in sneaker collecting and the culture. No one’s really doing that, and if they are, it’s only for the [hyped releases]. Not for the love of sneakers. I think one good thing that’s starting to happen is that not everything is hyped any more—no one is buying anything on the rack that doesn’t have [Yeezy branding] or a Retro. I like doing it, but at that time, I was just burnt out. I lost love for it. But I think at this point, it’d be cool to bring it back, be [no holds barred] and see where we go with it. Alec Banks
Alec Banks covers 10 things you need to know about StockX, the first "stock marketplace for sneakers" with an investment that can outperform Apple, Netflix, and Amazon. Kat Thompson
How do we redefine what it means to be a man and end the cycles of violence? These are questions Justin Tipping asks in his directorial film debut, Kicks—a story about masculinity and materialism.
HIDE COMMENTS