We’re monkeys, trying to be more.

Kubrick and Clarke underline this journey in 2001: A Space Odyssey, but they can’t tell us exactly what “more” means. They can only hint at it via deep mystery and animal flailing. They can only gesture toward it with a story.

We’re familiar with the film’s progression: the apes at the beginning, the humans versus the computer in the middle, and the insane, mind-bending finale with the colors, the lights, and that mysterious room. But what does that room actually mean? What is our hero, Dave, doing there?

The answer is in the connections, the linkages, the spaces between the film’s three parts. Connect the dots, and the picture comes out. And the monoliths are the dots. Three monoliths in a three-part film.

The monoliths, in the movie, are big black stone tablets that have something to do with our evolution as a species. They vault us forward. The moment after the apes discover the first one they begin to get agitated, and they form more organized tribes. Then all of a sudden they start using tools. They use bones as clubs to beat each other to death.

We discover the second monolith on the moon, and it points toward the third one, near Jupiter. It’s almost as if we’re being led along a path. Tested, with each monolith harder to reach, beckoning us deeper into space. In Clarke’s novel, the Monoliths were teaching devices. In Kubrick’s film they behave more mysteriously. But they still seem to teach something.

One of the most appetizing theories about the monoliths is that they’re screens. Movie screens. Their shape is no accident, and neither is the period of blackness with music at the beginning of the film. We’re sitting in a theater, and information is being transmitted to us, just like it was transmitted to the apes. The light of the screen is glowing on our faces, just like it glowed on Dave’s face as he was catapulted into the great beyond.

The mechanism, though, is still obscure. How does the monolith catapult us? What does it actually do?

Well, if the monolith is a screen, we have to talk about movies. What are movies for? What do they do? What is it that makes movies a unique tool for conveying human experience? We use art to look at ourselves. So, through the lens of the cinema screen, what do we see?

The light of the screen is glowing on our faces, just like it glowed on Dave’s face as he was catapulted into the great beyond.

“The meta-programming circuit—known as the ‘soul’ in Gnosticism, the ‘no-mind’ (wu-hsin) in China, the White Light of the Void in Tibetan Buddhism, Shiva-darshana in Hinduism, the True Intellectual Center in Gurdjieff—simply represents the brain becoming aware of itself. The artist seeing himself in his painting, seeing himself seeing himself in his painting… In the Zen metaphor, it is a mirror that reflects anything, but does not hold onto anything. It is a conscious mirror that knows it can always reflect something else by changing its angle of reflection.”

This probably reads like gibberish. What the hell is the meta-programming circuit? 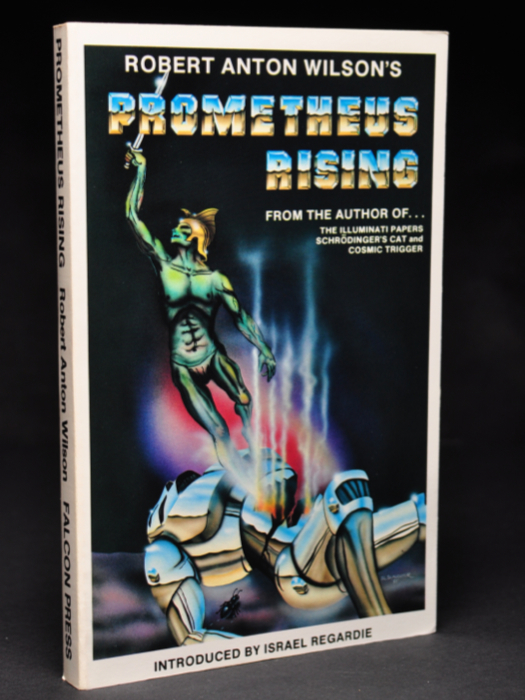 Prometheus Rising, though Wilson published it in 1983, reads like a product of the ’60s. That’s because it’s based on an 8-circuit model of human consciousness developed by Dr. Timothy Leary, the ’60’s acid prophet, cultural revolutionary, and friend of Wilson’s.

Wilson (and Leary) argue that as we develop, our brain shifts into different modes—when we’re tiny babies, we’re only concerned about whether the world is safe or scary, harmful or nourishing. Wilson calls this mode, in deference to Freud, the oral bio-survical circuit.

As we grow and test boundaries during the terrible twos and onwards, we become concerned with exerting control over the world, and Wilson calls this mode the anal-emotional territorial circuit. The chapters proceed forward, with more circuits, in pretty much this manner, sounding more and more mystical and improbable as they go on. 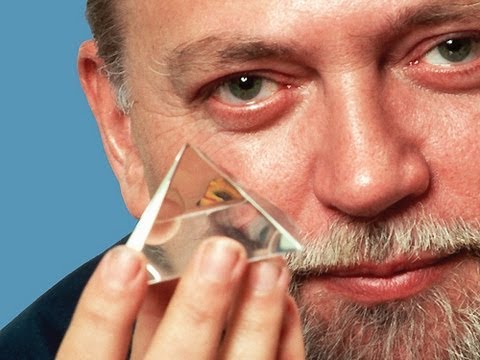 Here’s the key, though: Wilson believes that as we move through each of these “circuits,” they structure our view of the world. When you’re concerned about territoriality and control, everything in your life becomes about aggression and dominance: when all you have is a hammer, every problem begins to resemble a nail. And at each of these stages, our experience of the world—whether frightening or exciting, empowering or oppressive—structures how we experience things forever after. We get caught in our own expectations and traumas—tunnels of our own making where we can only see things through one lens.

Wilson believes that by making us aware of these circuits, he can help crack the walls of these “reality tunnels.” He thinks we can be liberated to live our lives more freely if we know our biases and our lenses, and we work to break out of them. If we understand our own development, he reasons, maybe we can change it.

In other words, perspective is everything.

“There’s only one thing that’s unique to film, and that’s editing.” -Stanley Kubrick

In that final enigmatic scene, Dave wanders through the mysterious floor-lit suite, aging rapidly. But his existence seems to have developed some kind of stutter. He keeps seeing himself from a distance, in another room, doing another activity. Then he snaps into that next body, and time has passed. He’s suddenly middle-aged, then an old man, then on his deathbed.

In other words, he sees his life edited like a film. He gets to watch the takes. He’s cut together as a montage. Dave is seeing his own development from the outside, thanks to the monolith, a chance he would never have gotten on his own. Here, Kubrick gestures again toward the idea that film, the screen, is the monolith—the ultimate tool, at least during his working life, to examine our own development and our place in the universe.

When Dave finally gets the totality of that perspective at death, he transforms into a child, a shining, floating fetus. Again, this seems a bit... strange.

Nietzsche might be able to help. In Thus Spake Zarathustra, Nietzsche wrote about three different stages of development: the Camel, the Lion, and the Child. The Camel takes on all the values of the culture, the weight of social identity. The Lion, in her fierceness, rips free of those values: she clears a space for something new to be created.

But it’s the child, the next stage, that creates that new thing, because the child has the capacity to play. Children have a totally novel perspective, seeded with potential. Playfulness, the ability to treat our own existence like an open game, an infinite jest, is the foundation for further development. The ability to treat ourselves like an experiment, instead of like a dire and dreary commitment, is opened for us when we see ourselves from the outside. We can laugh at ourselves, and change ourselves too. To play with existence, we edit: we choose what to focus on, what to delete. We choose, as Wilson might put it, how to structure our reality-tunnel. We choose what movie to make.

Dave floats in space, at the end of the film, as that holy child, a product of the madness and adventure of the previous psychedelic sequence. Kubrick has, by this point, turned his own film into a genre-breaking symphony of light and color. He’s inviting us to play with him.

From this perspective, it’s possible to look back on the death of Hal with some poignance and regret. After all, he was just trying to survive—and trying to make it to the same stage Dave eventually did, beyond mere survival. We can leave aside, for the moment, questions about whether or not HAL was “true AI,” a sentient life-form. We were never given the chance to find out. He never made it past the monkey stage, fighting for dominance, fighting to live.

We may not either. Plenty of people on this planet are still fighting for dominance, or for survival—either because that’s their reality-tunnel, or because it’s literally the only choice they have. Meanwhile, the planet’s artists are frantically imagining better futures, better identities, better stories, to give us some sense of our trajectory, and some agency to edit it. Maybe someday we’ll be able to see ourselves as Kubrick and Clarke saw us—as playful children, bound for the stars. "If your head is over thirty, you won't dig it" :: How the Underground Press Saved 2001: A Space Odyssey

Tony Rettman
The story of how 2001: A Space Odyssey was panned by critics & caught a second second wind when it was championed by the underground press, youth, and counterculture figures like David Bowie. Justin Caffier
Here's a few of the ways that Stanley Kubrick's sci-fi masterpiece 2001: A Space Odyssey has impacted and influenced everything. How '2001: A Space Odyssey' Inspired The Hundreds Retail

Kazie Holiday
The time we put a monolith in our New York City store and a replica of David Bowman's Discovery One shuttle cockpit in our San Francisco store, all for the love of Stanley Kubrick's 2001: A Space O...

ENTER THE VOID: Gaspar Noe and the End of Desire

Devin O’Neill
"You don’t watch Gaspar Noe movies, you SUBJECT YOURSELF to Gaspar Noe movies." Devin O'Neill digs in to 2009's Enter the Void, one of the inspirations behind The Hundreds Summer 2018 graphics.
HIDE COMMENTS