And now, something completely new... Which might sound strange for those who know my obsession for 1990s skateboarding. I called my disease “Droorstalgia” (obviously, based off Droors Clothing). Within that niche, I do have a particular knack for the duo that revolutionized skateboard graphics from 1991 on, artists Marc McKee and Sean Cliver, who corrupted numerous innocent kids’ minds by touching all the possible taboos of the times – sex, drugs, violence, religion, and politics. But you knew that, and there’s even a most excellent book broaching the topic! End of our commercial break.

The legend of all legends, Sean Cliver, encapsulates that radical approach of ’90s skateboard graphics – all after he won, mind you, a drawing contest to become an in-house artist at Powell-Peralta. From there, he gracefully sold his soul to the malicious devil Steve Rocco, in order to join World Industries skateboards, and help him launch the revolution of politically incorrect, skater-owned small companies in skateboarding.

Having said that, Sean Cliver is still very much hard at work today, finding time to still do graphics between two category-killing books. Since he has that amazing new series of decks for Girl Skateboards coming out this week, I figured I’d ask him about how the present is looking, without even asking ONE question about the ’90s. That’s the power of will, and, more so, very much part of my 12-step Droorstalgics Anonymous program. 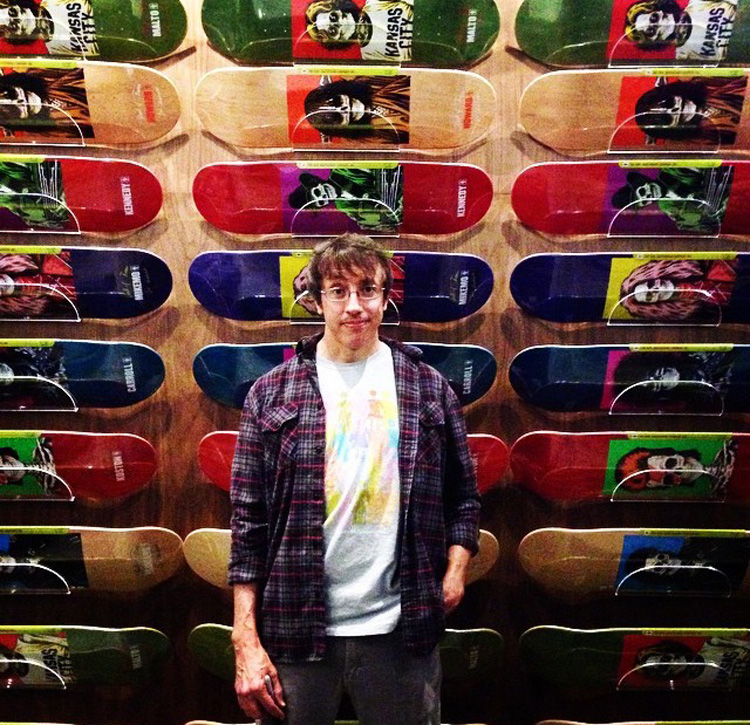 How did the idea for this Skull of Fame series come about?
Last year I was contacted by Rick Howard at Girl to see if I had an interest in illustrating a “skull of fame” concept they’d come up with featuring famous musicians. I grew up on the ’80s skull graphics, so naturally, I was in. Plus, with cell phones being all the graphic rage now, it seemed like a nice anti-movement thing to do — mind you, I had also just recently done a cell phone-ish graphic for Ride Snowboards, but that was more about modern man on the toilet. Actually, it was really all about the toilet. I’ve always wanted to draw something like that. 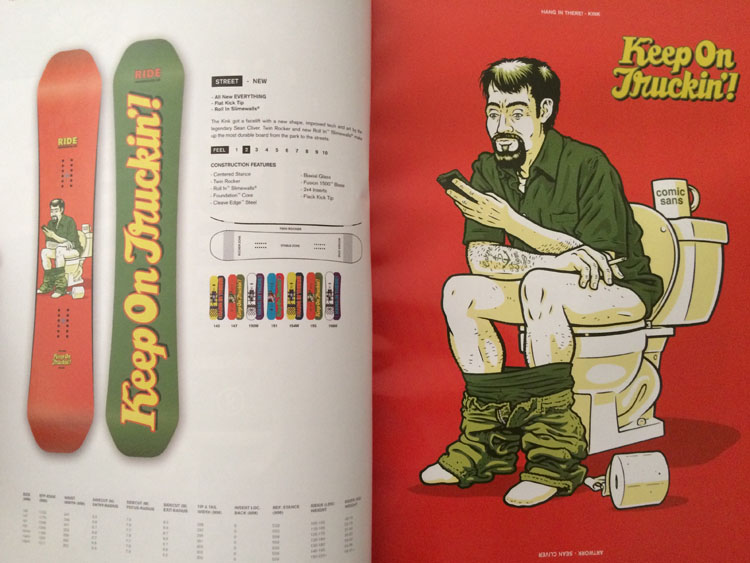 Who proposed what characters were going to get their skull re-work?
All that came from Girl as well – a list of riders with corresponding musicians. Left to my own devices, it may have been a different crowd, with one of them definitely being Danzig. But odds are, I probably would’ve chosen Michael Jackson for Guy Mariano as well. You know, the whole Blind “Video Days” thing.

Who were your favorite and most difficult ones to draw?
Bowie, perhaps, but again, that image has almost become a fixture in skateboard graphics ever since the Blind Jason Lee model in 1991. Nikki Sixx was fun too, and I like the colors on the David Lee Roth, though that man mane of a hairstyle was a little unruly and I took some broad strokes at it.

To be honest, they were all difficult to draw. Two weeks before I was to start work on them, I accidentally injured my drawing hand. And not even by skateboarding. What happened, I was in Costa Rica staying with my son when I had to jump out of bed in the middle of the night to prevent the dogs from cornering the cat on a stairway. I was half asleep and slammed my hand into the corner of a wall, like right between the knuckle of the pinky finger. Right away I knew it wasn’t good, so before stumbling back into bed, I grabbed an ice pack to wrap around my hand. The next morning my knuckle was swollen and stiff with limited mobility in my pinky finger, which may not sound all that bad, but I grip my pen in a very unorthodox and ungodly tight manner, much like a chimpanzee would if you gave him a pen to hold for the first time. I’ve gripped it like that ever since I was a kid, despite several teachers trying to correct my form. But my pinky acts as a load-bearing support for all the other fingers and now I could barely move it.

I went to see a doctor in Costa Rica who said it didn’t look like I’d broken anything, that it was probably a sprain – or at least as far as I understood through his broken English and my even worse Spanish – and would probably take a while to heal. Since I was unable to hold my pen, though, I had to use a brush to ink with for the first time ever in my life. I’ve always, always used a .00 Rapidograph pen. Fortunately, the brush worked out with the style of the graphics. Six months later, though, my pinky still doesn’t work properly and it was recently suggested to me that I may have damaged the nerve.

Oh, and as for one of the more difficult ones to figure out... probably Merle Haggard. He didn’t really have an “iconic” look in time that translated to instant recognition when boiled down to skull and bones. 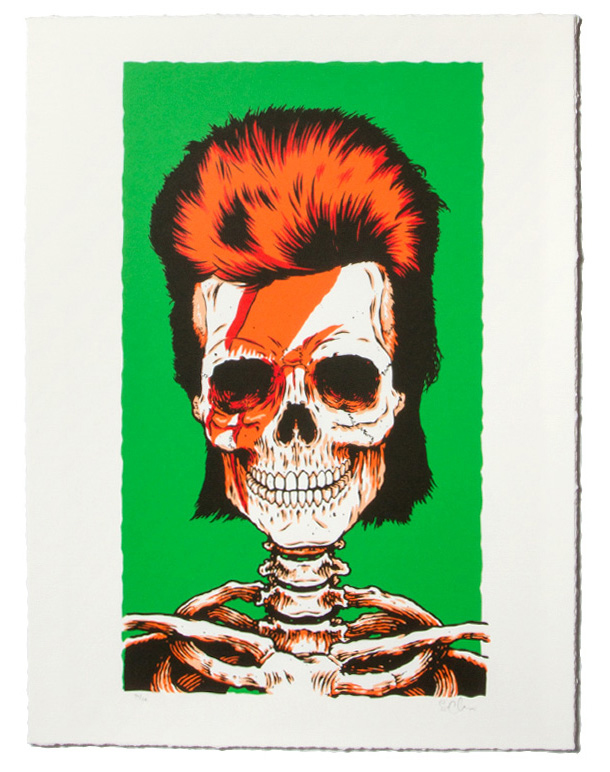 What are some art jobs outside of skateboarding that you have landed recently?
There are jobs outside of skateboarding? No, I’ve only had a few, and I don’t think snowboards are all that far from skateboards. But I’ve done a few odd concert posters for bands like Pearl Jam and Blink-182, which were actually a nice break from the long and skinny world in which I typically work. And occasionally [Jackass producer] Jeff Tremaine will throw me some storyboard work for some of his commercial projects.

Do people who commission you for these do it knowing your skate graphics past — like, oh I loved this board or that board. Do they quote any board of yours in particular?
Typically, yes, that is how I’m known, and it’s usually those “early ‘90s” graphics that get referenced. Nothing in particular though. Just that controversial/subversive feel.

How was your Supreme collaboration received? Any angry people etc you might have heard about? Concerned citizens perhaps?
I don’t think I ever heard anything coming from the Supreme boards...

I think I saw far more opinions expressed about the “Last Party” board I did for HUF last year. No one ever said anything directly to me, but it’s hard not to scroll through comments on Instagram and it looked like more than a few were spooked by that one. I just found it funny that both me and Marc McKee simultaneously did a “Last Supper” theme without even knowing it. His was for Cliché and featured elements or characters from most all his iconic “early ‘90s” graphics. 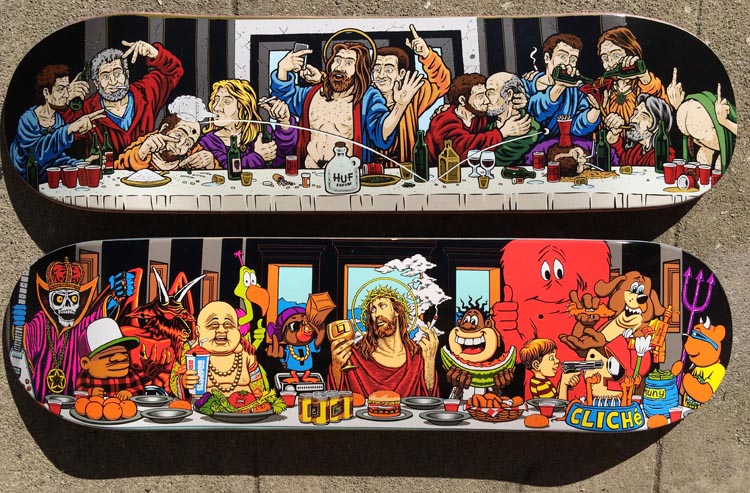 Above: Sean Cliver’s HUF board; below: Marc McKee’s Cliché board.

Who do you do skate graphics for these days?
I’m a total gun for hire, so I’ll entertain offers from work from most anyone. Within the last year, I’ve done work for Girl, Cliché, Klein Industries, Element, Supreme, DGK, and HUF. I think I’ve got a fun project in the works for this coming year, so hopefully that comes together.

Just because a Droorstalgic relapse is always fun, how has your job evolved since “the Rocco days”? By that, I mean does it pay more, less, the same? Is it harder?
There was always a nice sense of security working for one company or distribution house. The freelance life can be a lot more dicey, but it can also be more fun in at least having a choice of what work to take on. I’m not just churning out work to fill catalog requirements. As for the pay – well, it is the skateboard industry, but it really depends on the company and project. Some pay really well. Others not so much. But I have a good network of companies and friends that support my work, and the projects I tend to be approached with are of a creative nature up my alley, subversive or otherwise. Sometimes it’s just plain fun to draw a good old fashioned skull thing like this Girl series.

Check out Sean Cliver’s definitive history of skateboard art DISPOSABLE at disposablethebook.com. Follow him on Twitter at @seancliver. V/SUAL
It has been amazing to see where skateboarding has grown to be. I mean, if you started in the ’70s or ’80s, I am sure it is mind blowing. But for me starting in 1992, when it was the complete oppos... Seb Carayol
The undisputed enforcer of SF's The Embarcadero in the late '80s, pro skater James Kelch – nicknamed "The Mayor" – shares his 5 favorite skateboard graphics and the stories behind them. Seb Carayol
Seb catches up with the founder of Heroin Skateboards, FOS, on why he loves Starbucks and overpatched pants, his pirate radio show on Kchung, illustration, and guns.
HIDE COMMENTS